A weekend in Halifax

For our last weekend in Canada we headed to Halifax.  Friday was a beautiful day for walking around town.  Also a great day for a delicious lunch at Darrell's (previously called "My Other Brother Darrell's") with our friends Jodi and Karine.  It was great to get together with them again after meeting them in Tennessee earlier this year.

After lunch we took a walk up to the citadel for some views of the city: 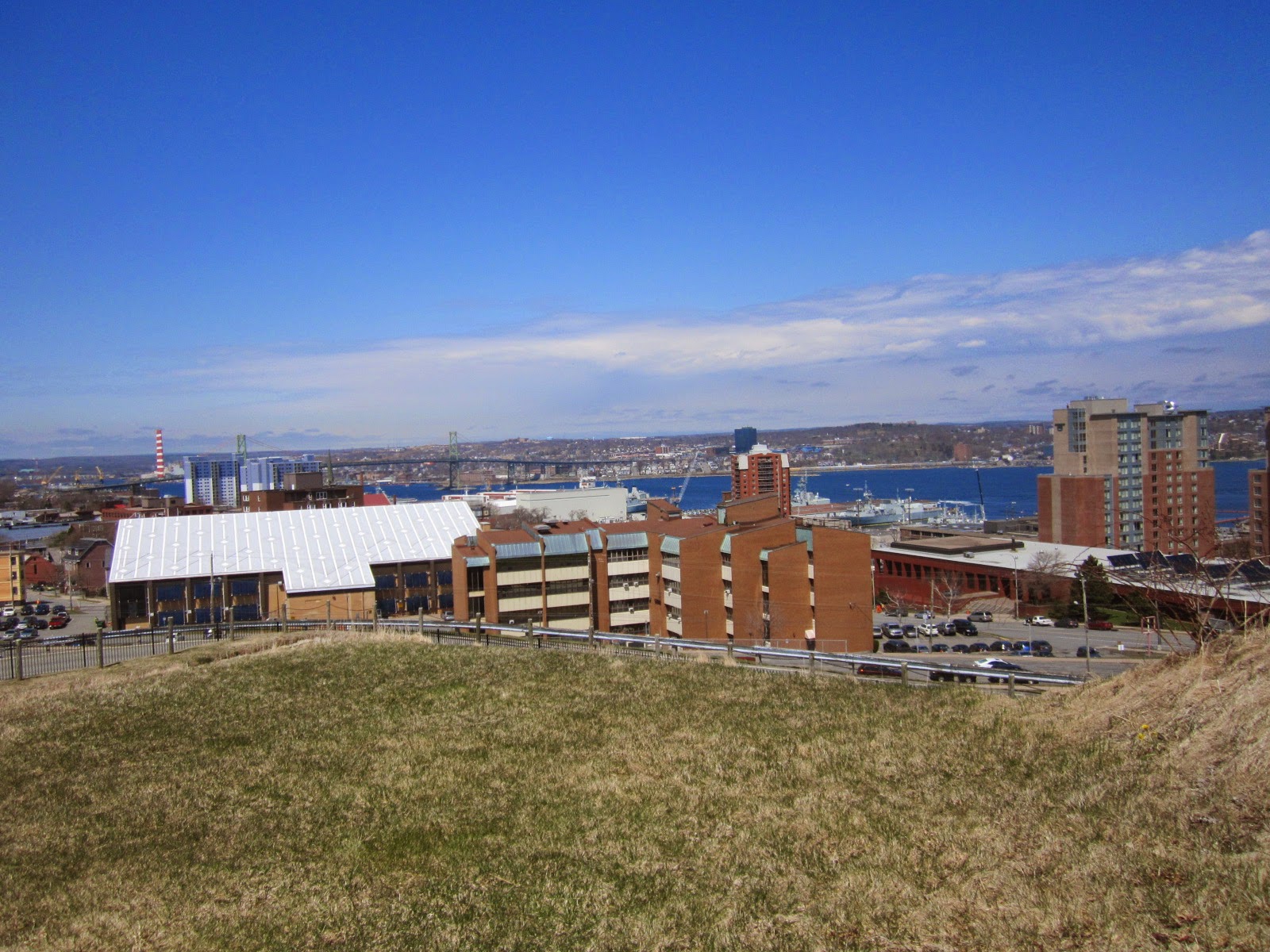 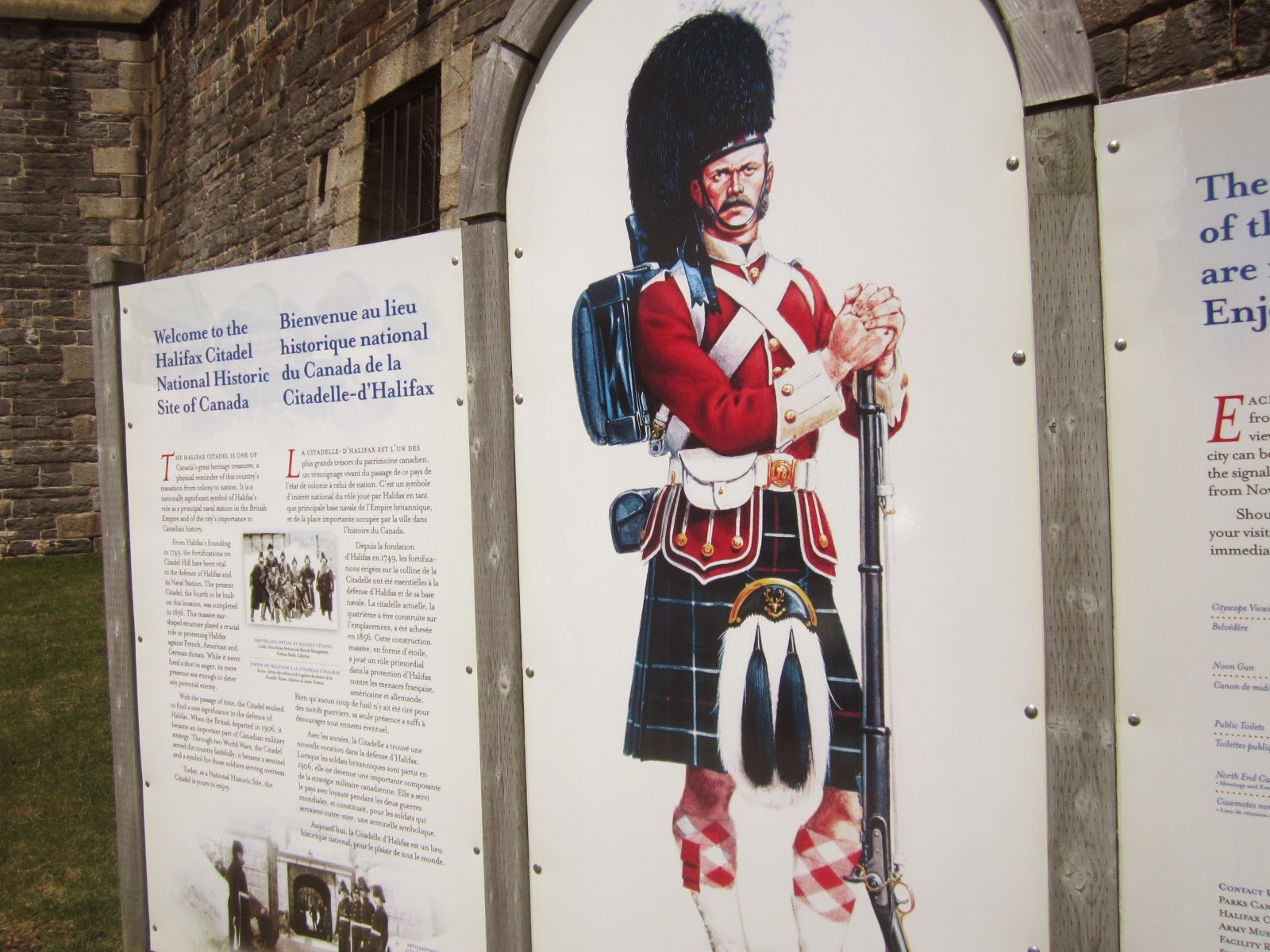 "Do not climb into any of the gun openings" - good advice as a general rule. 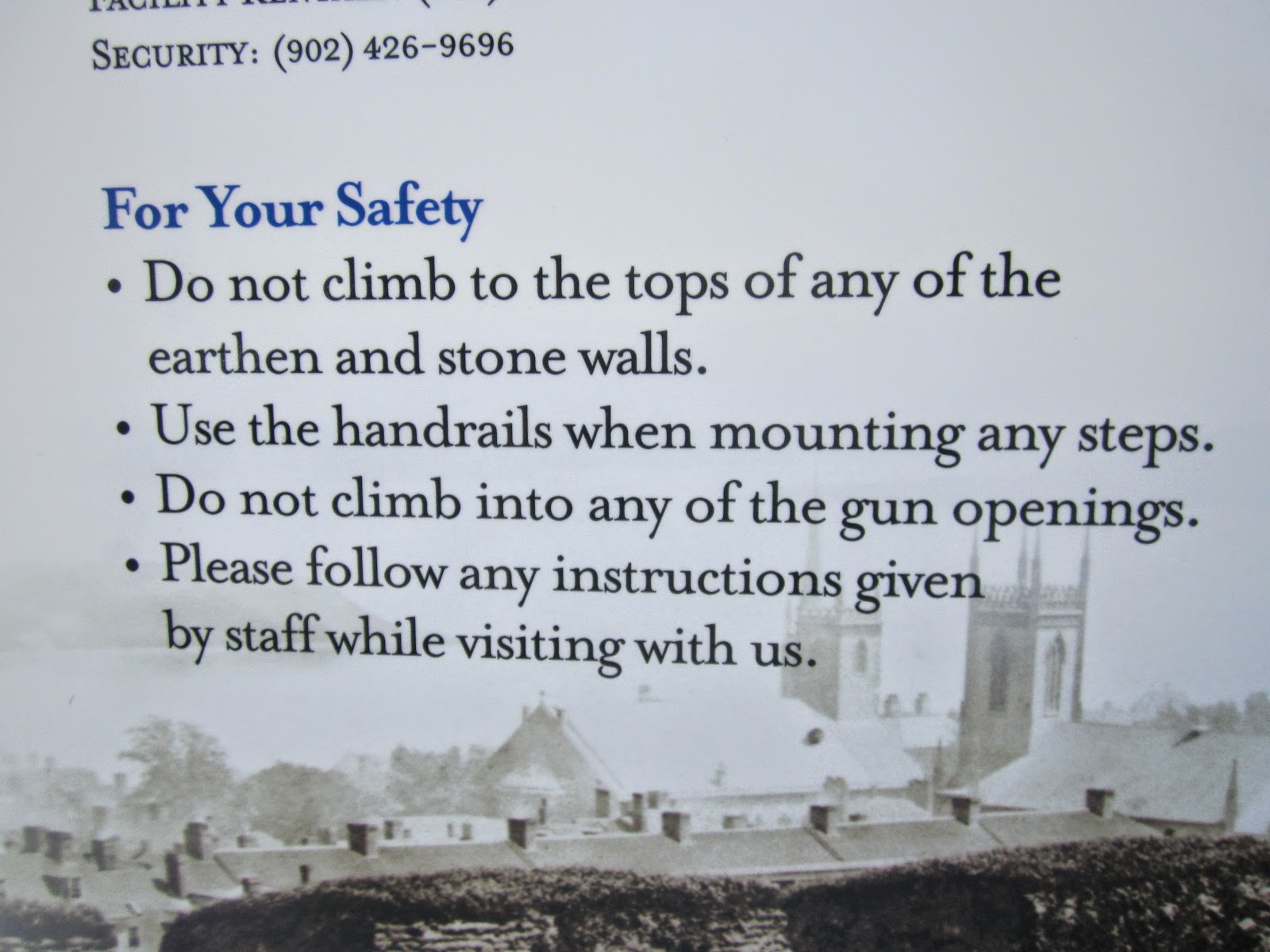 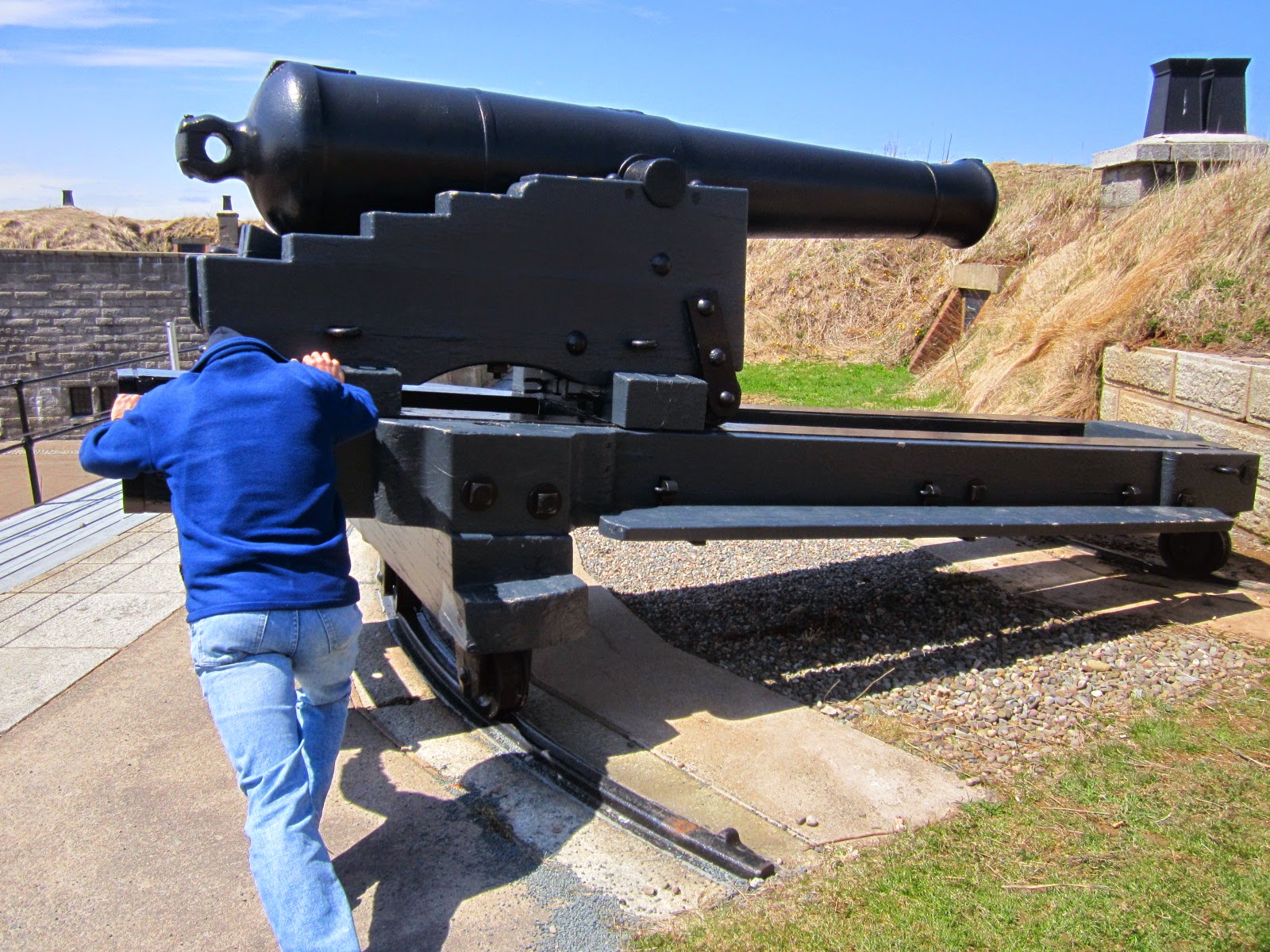 Training for the upcoming tourist season: 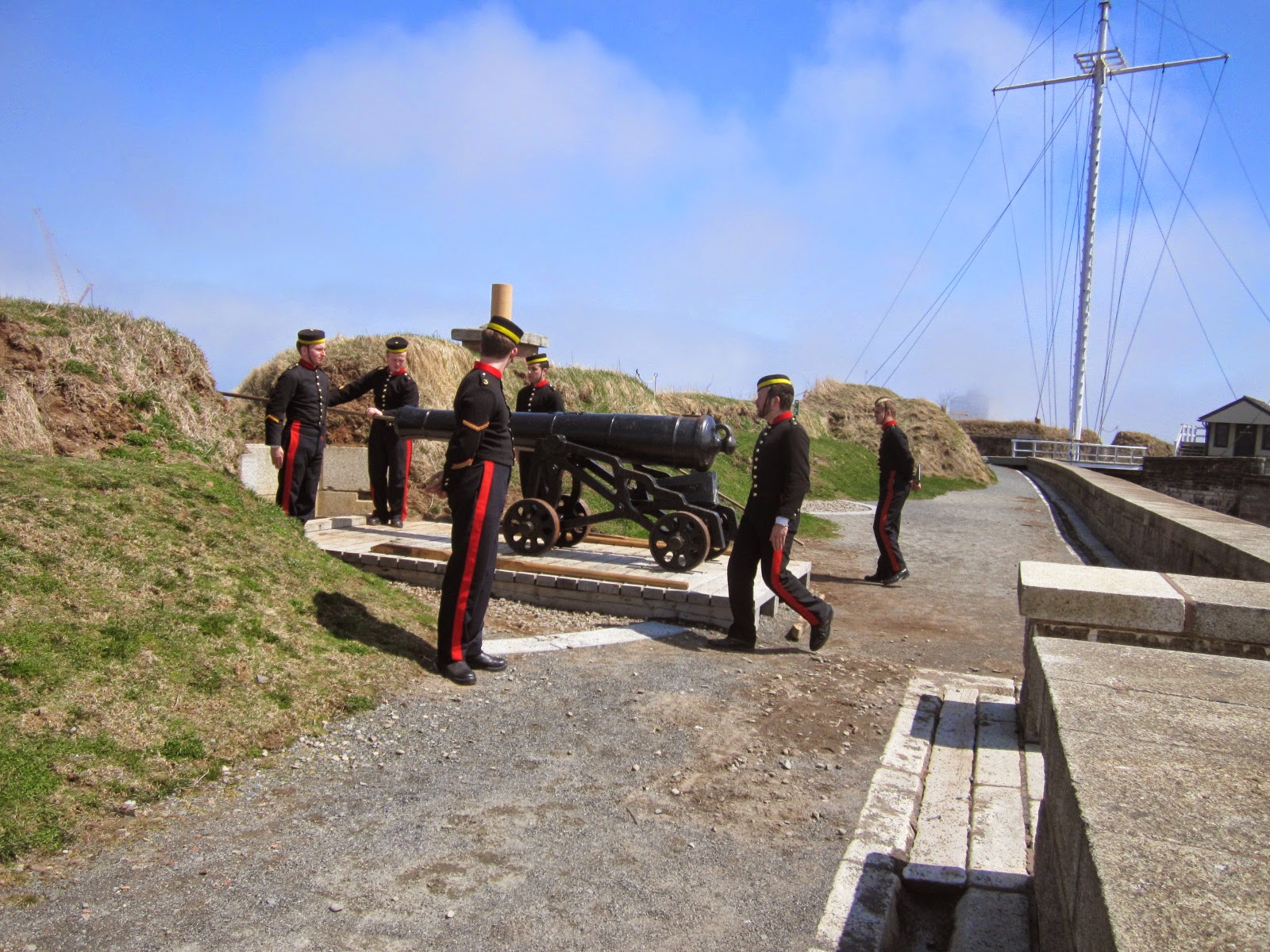 I love the tall ship motif: 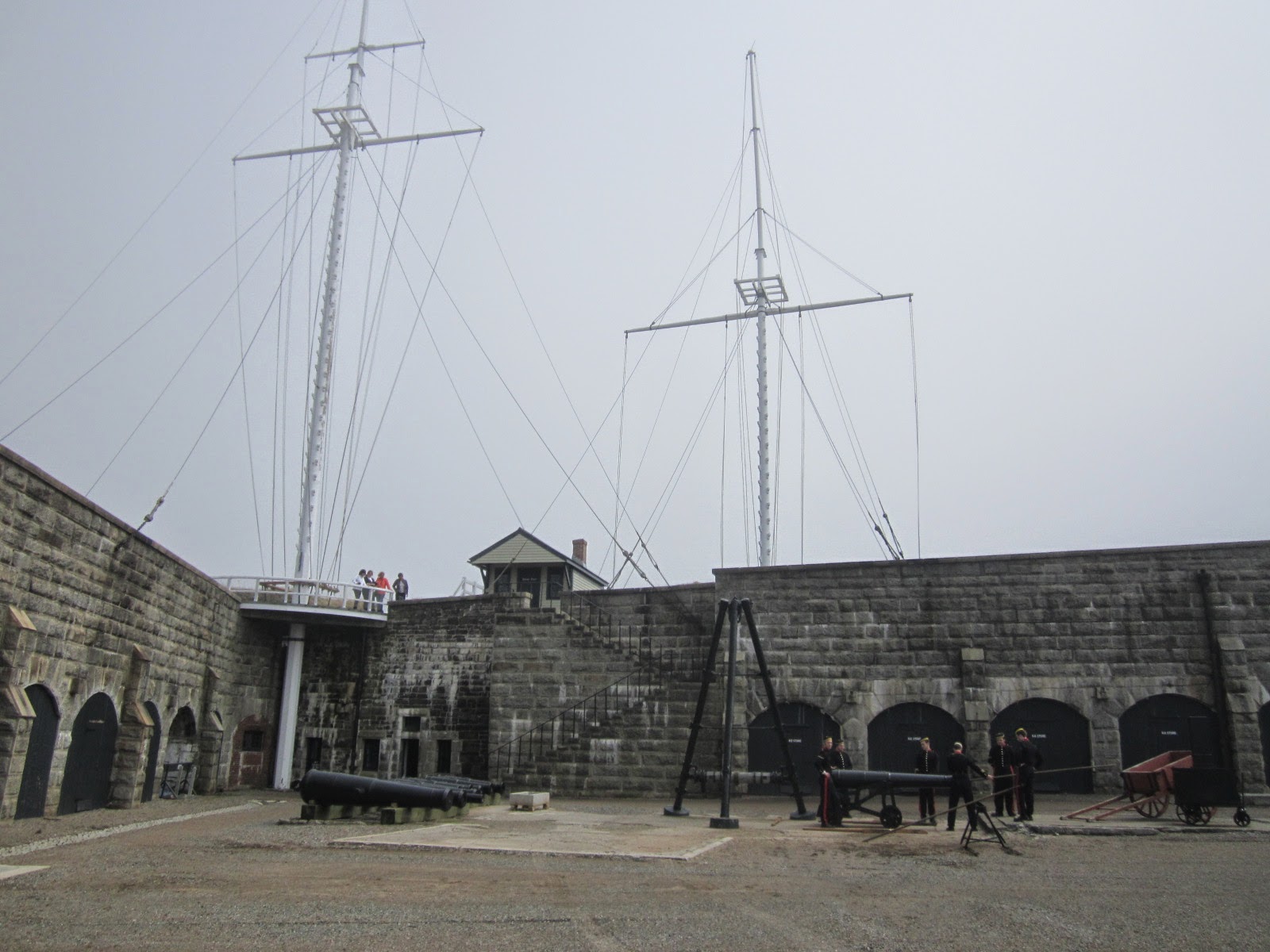 While we were touring the citadel, the fog rolled in - and it wasn't kidding around! 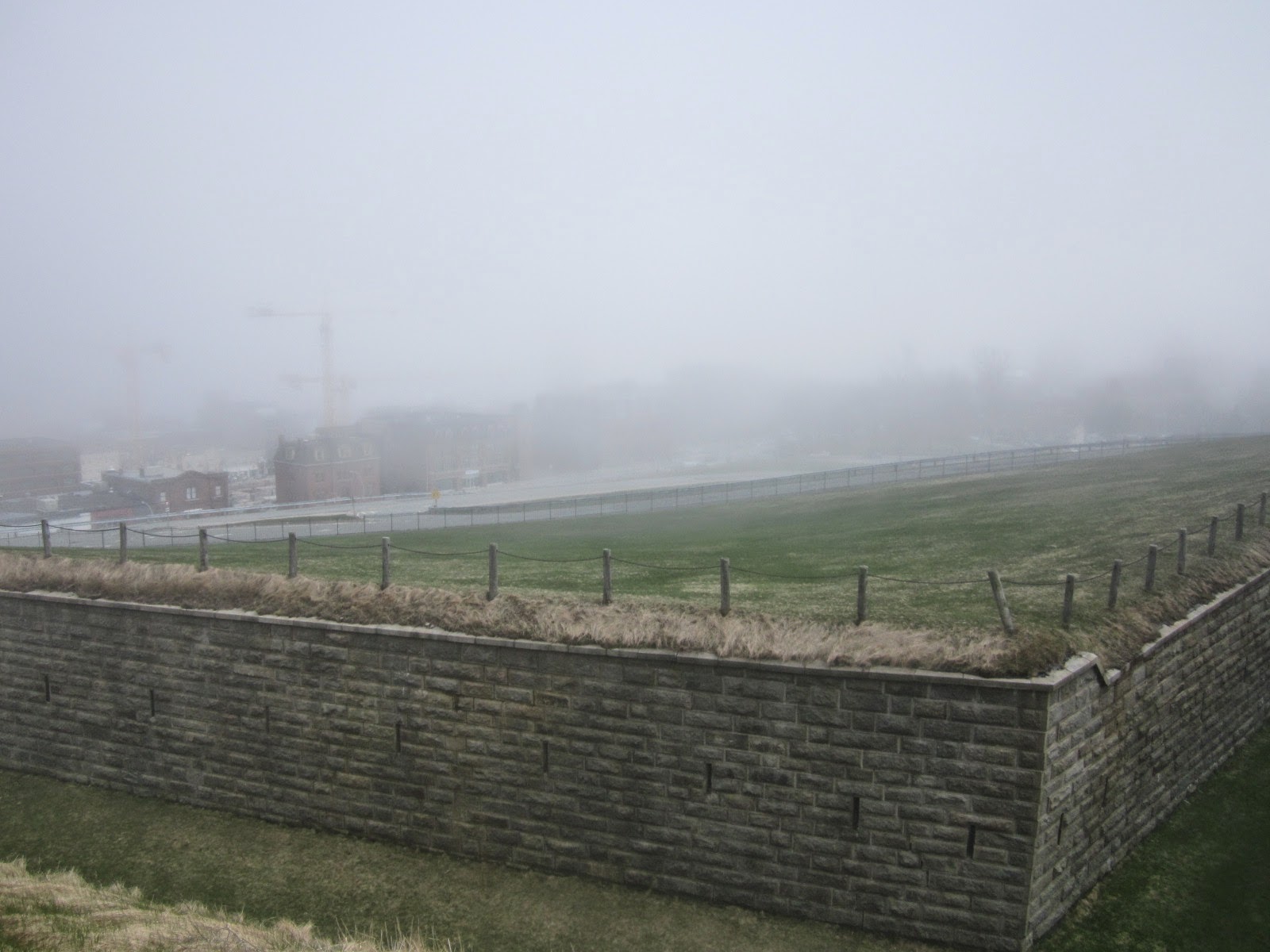 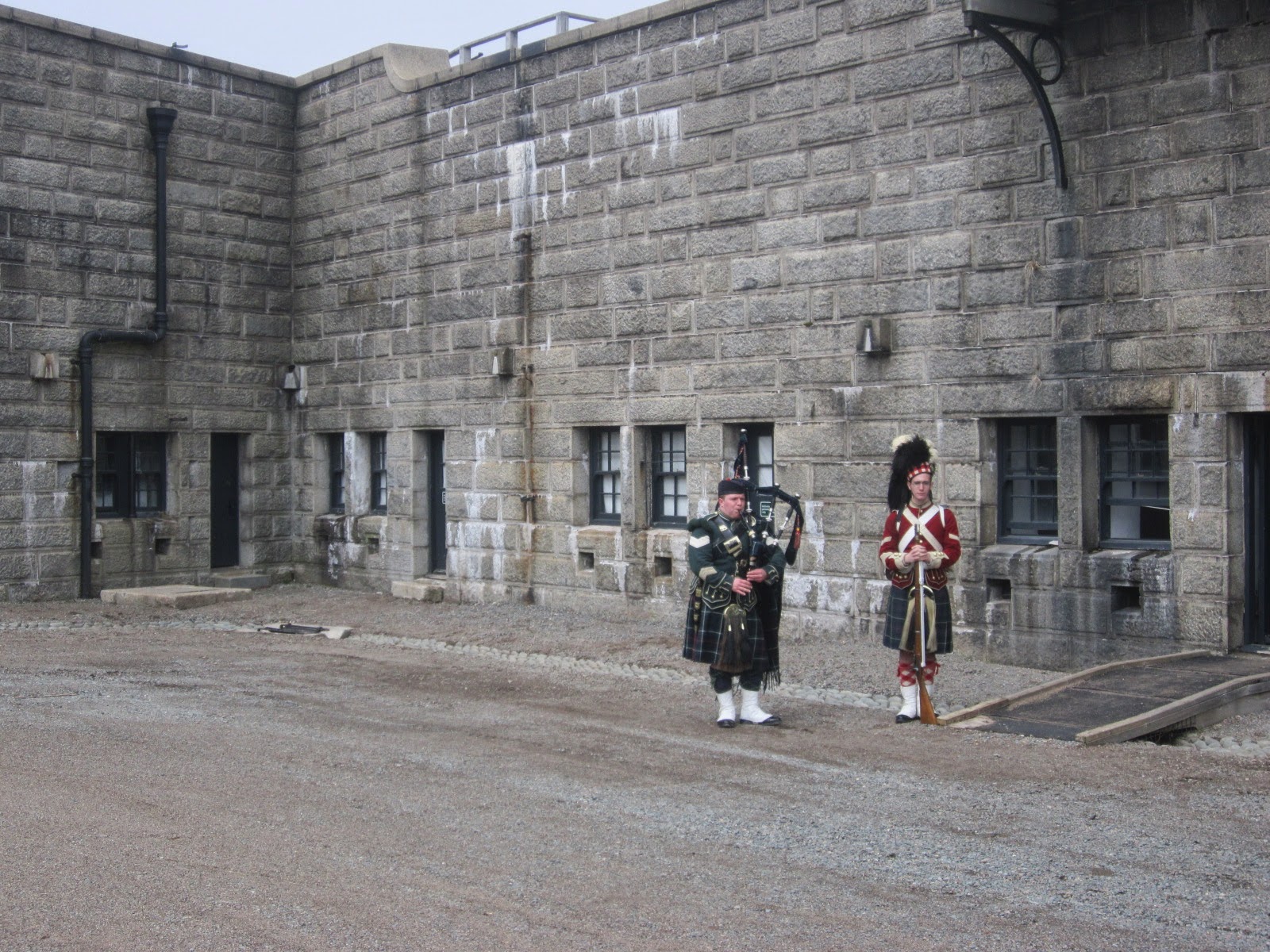 We saw a bunch of funny signs and interesting business names around town, but it took me a while to remember that I was carrying a camera. 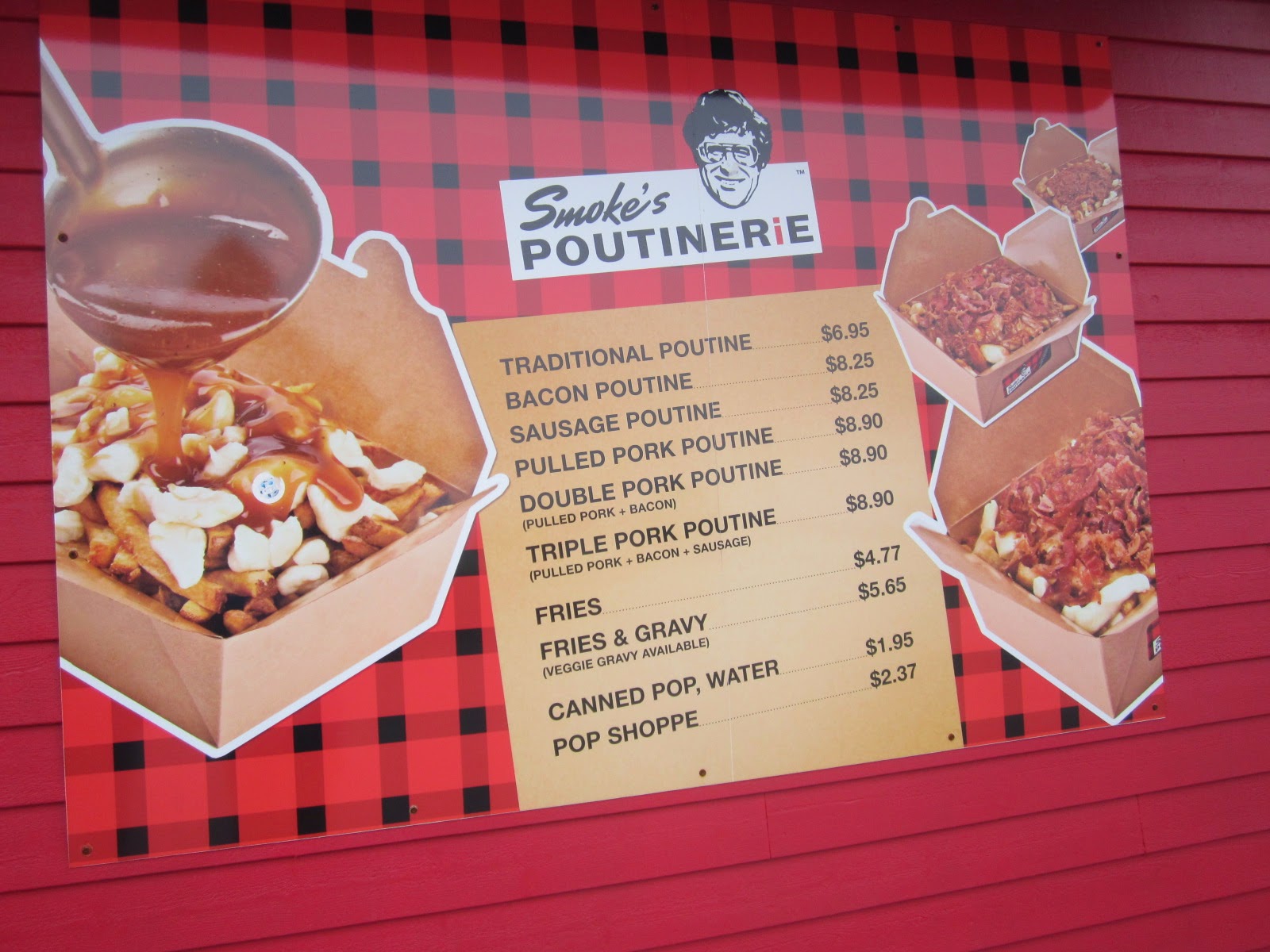 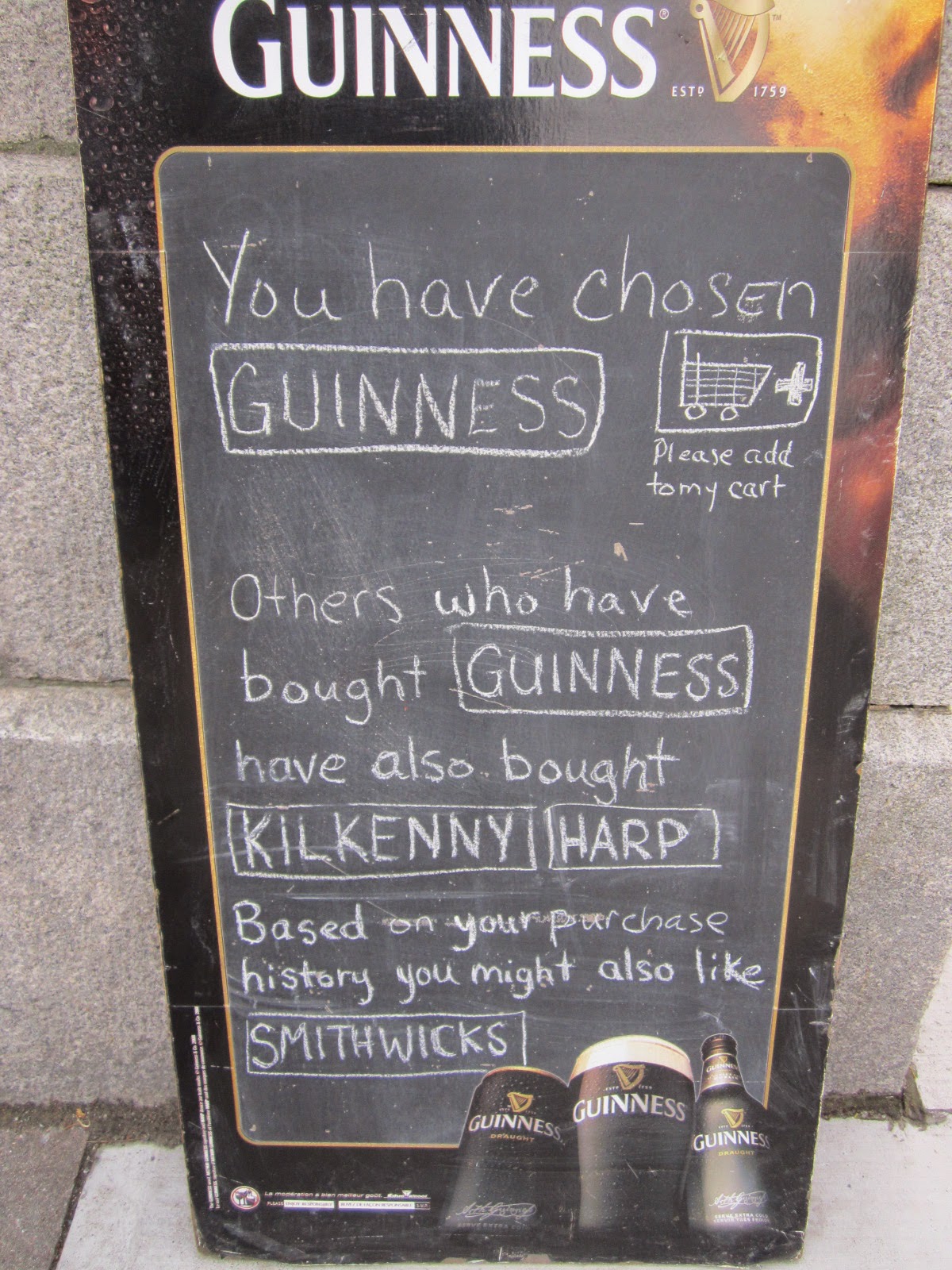 John found a drink that was invented by a barista that we met in the Smiling Goat - she called it "Chiader", a combination of cider and chai.  Awesome!  Perfect for a chilly day. 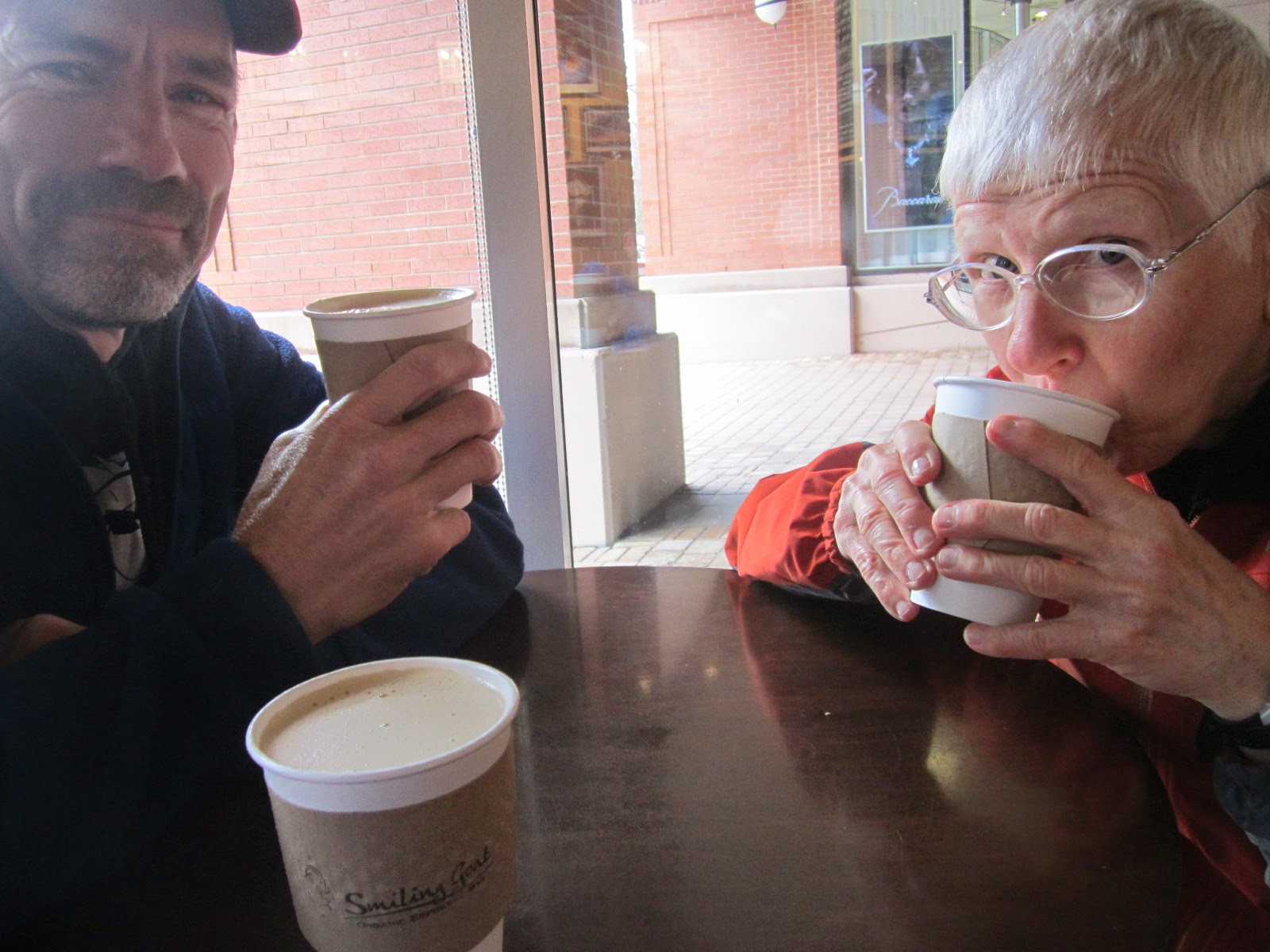 Jodi and Karine had told us about a rogaine event near Halifax that weekend, and Mom was OK with us leaving her to spend a day running around in the woods.  So we signed up for the 8-hour version, excited for a chance to explore the Nova Scotia scenery up close.

The only actual running we did was at the start and the end of the 8 hours.  Without the full 24 hours to explore most of the map, we got to pick which parts to focus on.  Two checkpoints were labeled "First To Find", where you win a prize if you are the first team to arrive there.  That sounded like fun, and the further of the two was several kilometers away down dirt roads and trails.  Plus it was in the area of the highest value controls, so we plotted a loop in the southern section of the map that would hopefully bring us back around to the "Distance Bearing" exercise and then maybe we'd have time for the "Line-O" section near the finish line if everything went well.

The run to control #125 went great and we nabbed the "First To Find", success!  As it turned out, that was the highlight of our performance...

Well OK, we did fine to the next control, #124.  Immediately after leaving the trail we got into the bushwhacking, alternating between dense trees/underbrush and thick grass/soggy marsh.  With a good bearing and pace counting, plus a decent read of the shallow contours, we somehow managed to nail the flag dead on.  A slow but accurate 800 meters.

It was obvious that any missteps could be very difficult to recover from.  Movement in any direction took a lot of time and effort, so it wasn't easy to "check what's over there", for example.  There weren't a lot of features to orient on in this area of the map, either.  As we pushed slowly northward toward #122, it became clear that the creeks and marshes were going to give us trouble.

Keeping an exact bearing and pace count was complicated by the downed trees, things to climb over and under, rocks in the way, all kinds of obstacles.  John did great in finding ways through all of it, and the pace counting helped me have confidence that at least we were going somewhere, even though it was slow.

Somehow we maybe thought we crossed a creek that was actually a marsh, and/or we were too far to the right by more than we thought possible, or something else I can't explain.  We got in an area that seemed like a creek intersection, with the vague sense that there was a lake just to the north that we couldn't see.  No control.  We got turned around vs. what the compass was saying, and our efforts at recovery led us pretty far astray.

It got to the point where John climbed a tree to try to figure out where we were.  He spied a lake, yay!  We were too far west, but at least we had a plan.  In the end, we spent an hour exploring the edges of Robert Lake until we finally returned to the actual area of #124 where we climbed up onto a rock to locate it.

Yep, you can't recover from losing an hour to poor navigation during an 8-hour event.  Also, an occasional orienteering humbling is good for me, especially after coming out of the Barkley thinking I knew what I was doing.

Oh, and Nova Scotia bushwhacking can be rough!  We were highly impressed that anyone would sign up for 24 hours of that.  8 hours was good practice.  Knowing it was only 8 hours made it doable.

We spent the next 600 meters slopping through a swamp.  It seemed a bit faster than the woods except for the occasional sinking into the mud.  Partway across, John took a step that didn't have a bottom to it, ending up with his entire leg somewhere below the level of my feet, stopping only because the rest of his body didn't fit into the hole!  We were fairly astonished by that turn of events.  I helped pull him out, luckily with shoes still attached.

Thanks for leading the way through all of this, John!  Taking one (or more for the team), that's my man.

We eventually got back into the woods and crossed in between a couple small lakes to find #126 near an area of even worse deadfall (some leftover effects of Hurricane Juan).  We had accomplished our goal #2, getting the 3 highest value points, phew!

The next set of 3 controls (goal #3) was in the right direction for starting back toward the finish, so we pushed out of the vegetation to a small road and started that way.  We were disappointed to be running out of time for the two special sections, but at least we could fit in a little more practice.

The climb up to #235 went fine and we located the control amid some large boulders.  Our first pass at #240 failed miserably, again with our inability to distinguish a swamp from an actual creek, and with the contours not making sense.  The 10-meter contour interval on the map hid a lot of the small features around us.  We ended up within a couple hundred meters of the next hill so we aimed there for #237.

On the way we ran into our friends Karine and Jodi who were doing the 24-hour race.  Hey cool!  It was great fun to see them, and everyone seemed in high spirits.  Go get 'em, y'all!

#237 was the simplest one to that point, by far.  We figured we had enough time to make another pass at the one we had just missed, so we headed back.  Other teams in the area were also searching, but their presence and the tracks of other racers weren't really a help.  We found several interesting rock faces (that was the clue for the control), but it wasn't until we came across the actual creek that we found the checkpoint.  Finally!  It didn't seem to be exactly at the south end of a rock face, but what do I know.

Well, gotta run!  We took our wet, twig-covered selves and tunneled out to the closest trail.  Finally time for more running :)

We snagged three more quick points along the way back, #184 near an intersection, #209 in a small swamp with more wet, muddy feet, and finally #163 next to a couple makeshift toilets (?) just off the trail.  We crossed the line with about 3 minutes to spare.  Fun!

The people running the event were super friendly and nice - like the rest of Canada, everywhere we went we met wonderful welcoming people.  The post-race food was great, and we ended up in 8th place out of 38 in the "Public Competitive 8-hour" category, not bad for giving up so much time being lost.

The highlight was winning a mini Keurig for the First To Find prize - too funny! 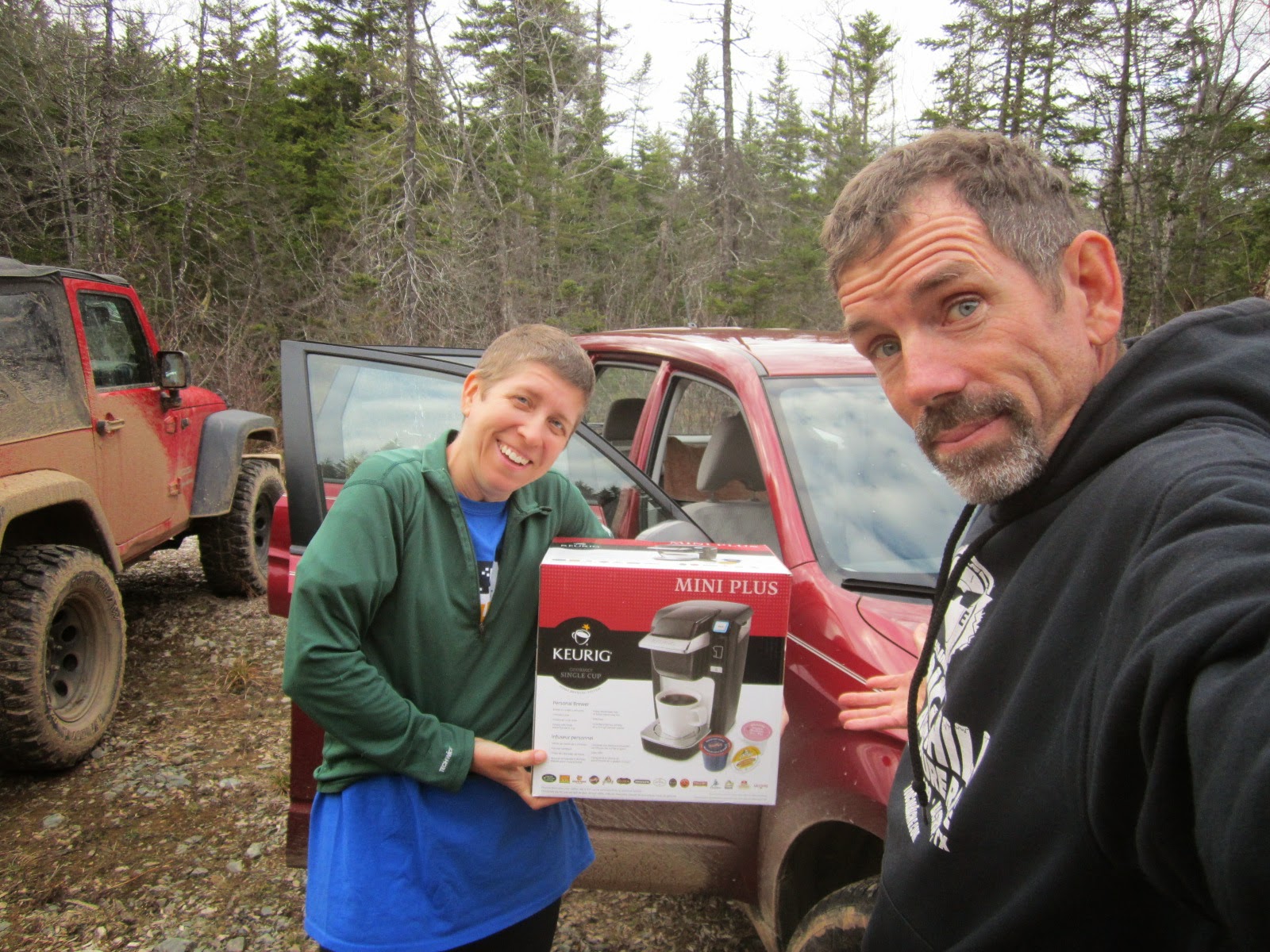 Respect to everyone that tackled that course, it was a doozy!