John's first free weekend in Maui!  We celebrated with a driving tour around west Maui.  I got to show him a couple of my favorite places plus we stopped at spots I had yet to see (and there are still more, so we'll be going around again sometime).

Petroglyphs, didn't quite expect that.  These are carved into volcanic rock.  Probably a mix of old (called petroglyphs) and new (called graffiti): 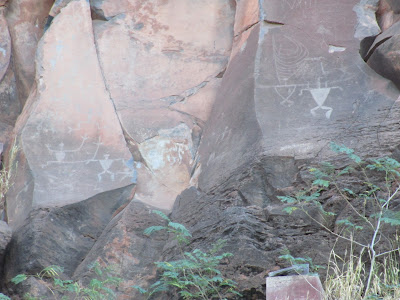 The lovely and HUGE banyan tree in Lahaina - beautiful!  It's all one tree, starting new roots by hanging down and growing into the ground around it.  Very cool. 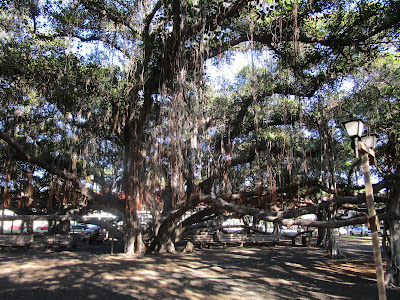 Part of the same tree (and a bench in the background that is apparently a nice place for a nap, and no, that isn't John): 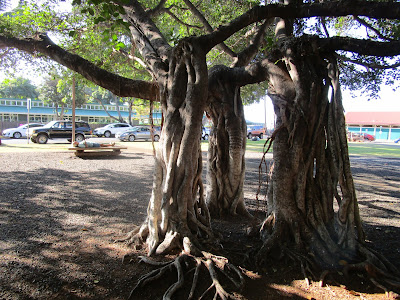 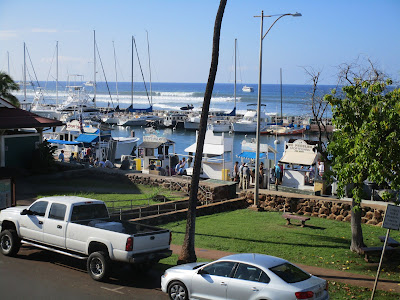 Going for a walk along Ka'anapali Beach.  Shoulda brought our slippahs (sandals): 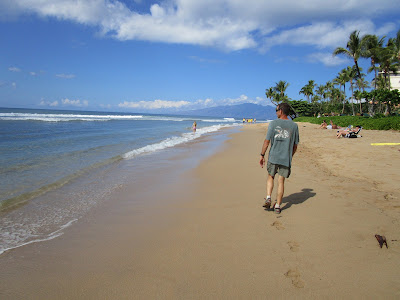 Lots of surfer action, fun to hang out and watch: 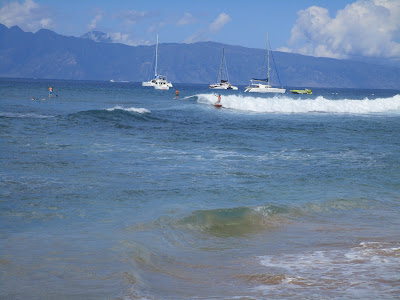 John directing giant waves as they crash into rocks: 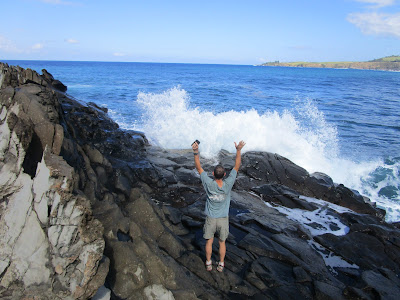 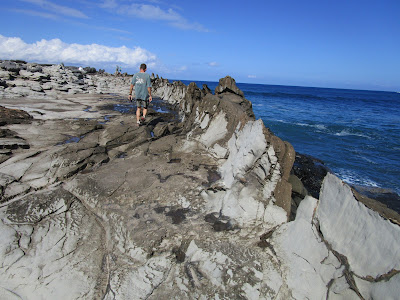 Conjuring up another large wave, my favorite spot to watch the surf coming in close: 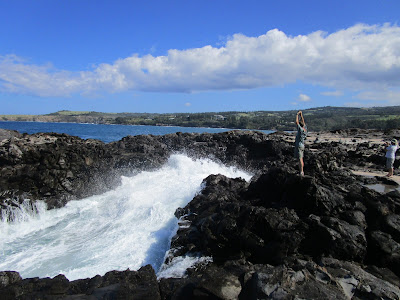 And a short video to get a better feel for the action:
https://youtu.be/GSS6adtddH0

Further up the coast, we pulled off to watch a bunch of surfers riding waves below us, an excellent vantage point: 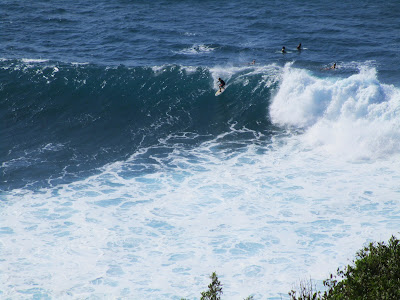 We found a tide pool from a guidebook, a place where you can sometimes get in the pool to soak and listen to the ocean lap waves against nearby rocks - pretty spot: 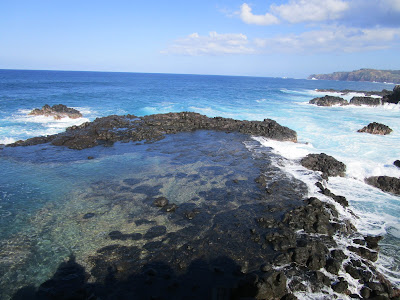 However, it was afternoon (bigger wind) + high tide, so we would not be getting in the pool today.  Every few minutes, this happened: 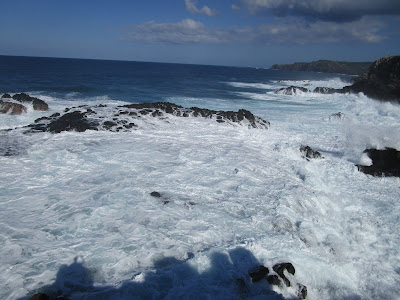 Sometimes the near ocean would drop and the further out water level would raise and it was almost like the earth was tilting.  Then something like this would happen - big surf! 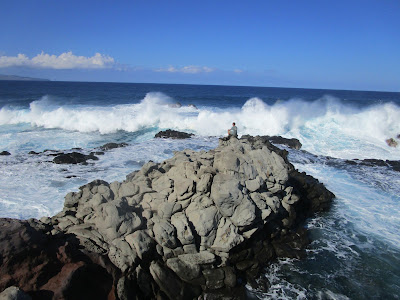 We hung out for a while watching, listening, getting splattered with salt water kicked up by the wind: 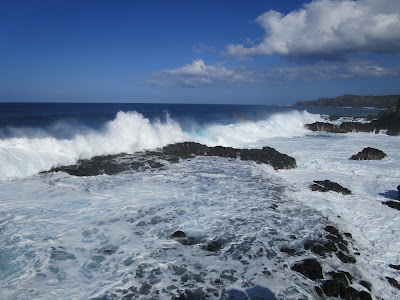 Well done, John!  What isn't easy to see is that this wave (and John) are about 50-60 feet above the ocean, huge splash! 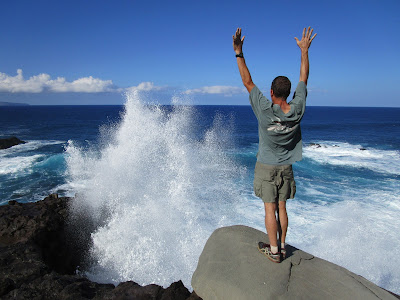 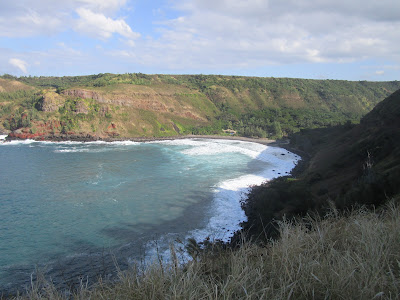 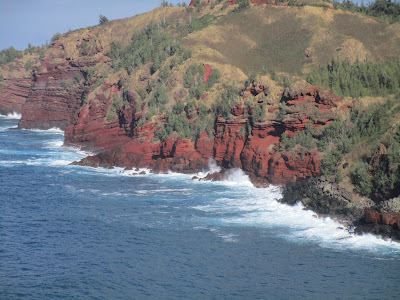 We had a marvelous time watching whales from the shore, all the way around the loop.  In the morning they were very easy to see with blowholes spouting above calm water.  Later in the day it was windier but we still caught glimpses.  Some of the splashes were big enough to at least get a sense on camera that there is a whale out there: 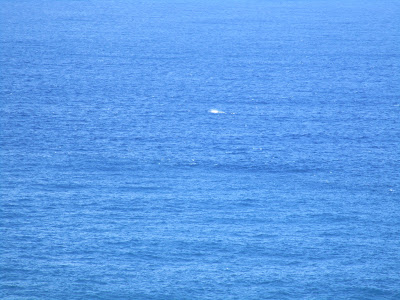 A different kind of blowhole!  Nakalele was tossing water super high in the air, awesome being there around high tide this time: 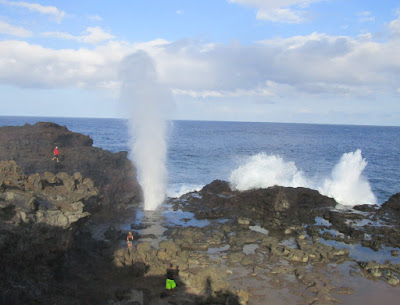 One last treat!  We caught sight of a whale doing repetitive tail slaps, first time we have seen that.  So cool!  Also - I managed to zoom the camera in far enough (and still stay in the right area of view) to get this shot.  Thank you whale, that was awesome! 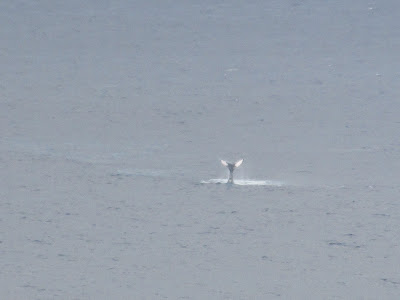