Primal Quest was back, this time with an expedition race in British Columbia.  Team Vignette was supposed to do this race in 2017, but it was cancelled :(

I'm more of a "I'll run anytime" and not a "I'll adventure race anytime" kind of racer, so I couldn't justify all the training again this year.  Mount Rainier was plenty enough of an adventure!  But I wanted to see the area and be a part of the race, so I signed up for volunteer coordination.

And what a great group of volunteers!  I was so lucky to get to meet and work with all of them.  I only wish I could have spent more time with them on the course.  There was so much going on across the whole spectrum of the race that I think I was most helpful as part of the "command center" back at HQ.

At least we had some fun times as a group before the race started.  Here's Matthew explaining a few things as we set up for racer check-in: 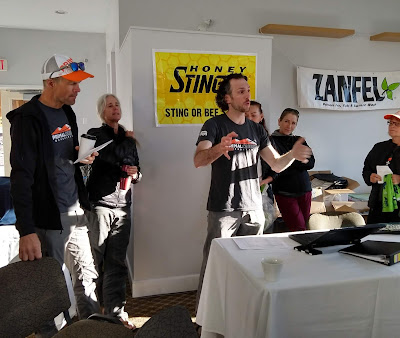 Dale posing for our "thank you, Subway, for being a sponsor" picture: 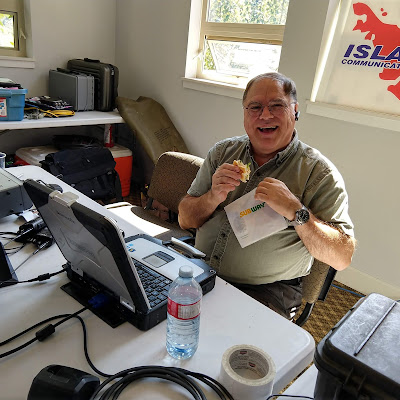 Lovely views just out the back window of the Executive Suites in Squamish: 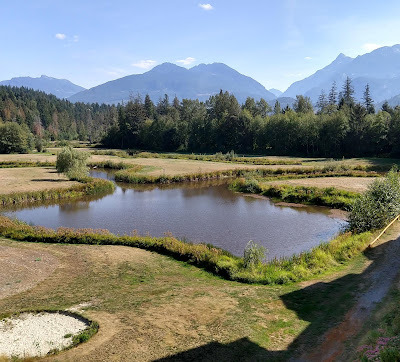 Ian Adamson during the pre-race briefing - it was so neat to get to work with Ian! 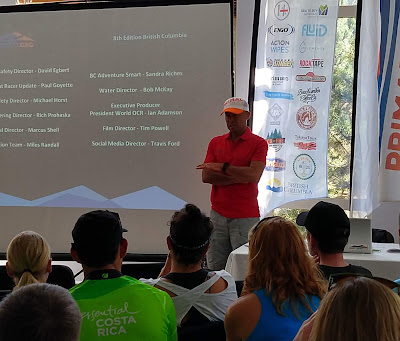 One of the more memorable group activities - sewing patches on the race jerseys, recruiting as many people as we could to help, and spending the time joking and laughing together: 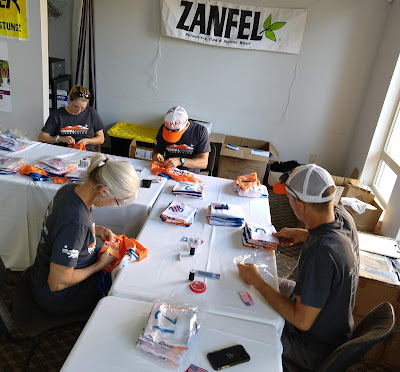 Once the race started, everyone was running around like crazy trying to stay on top of everything.  It looked like a stunningly beautiful course, from the opening paddle in First Nation boats to a rainy bike ride and then up onto the glaciers for the mountaineering section, moving into a whitewater rafting section.

There are currently a bunch of great photos from the 2018 race at the Primal Quest website:
http://primalquest.co.nz/

Since I was mainly at HQ I don't have a lot of race-specific things to add, so I'll just pop in a couple highlights from my perspective.

Witnessing Ian giving a videotape update about the status on the course: 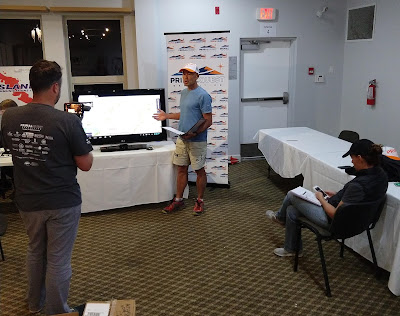 Watching the team trackers we noticed one team taking an "alternate route" and I declared that it likely wouldn't be faster than following the trail.  It turned into a wager for a dozen donuts as to which of two teams would arrive at the next TA first.  Either way, everyone at HQ would be a winner the next day.

Thank you for the Tim Horton's donuts, Dale!  :) 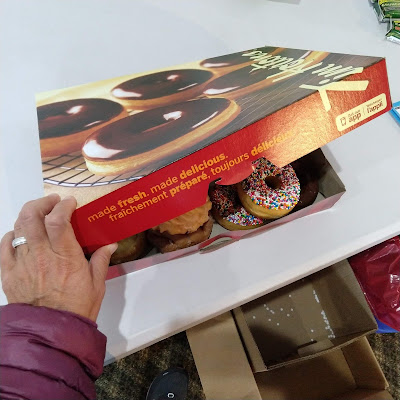 I did manage to get outside a couple times, including volunteering at checkpoint 15.  It was a river take-out for the Pursuit teams plus a mid-paddle checkpoint for the Pure teams the following day.  I could easily get there since it was near HQ, and an upstream dark zone meant the teams were close together when they came through.

One of the Pursuit teams finishing their paddle leg: 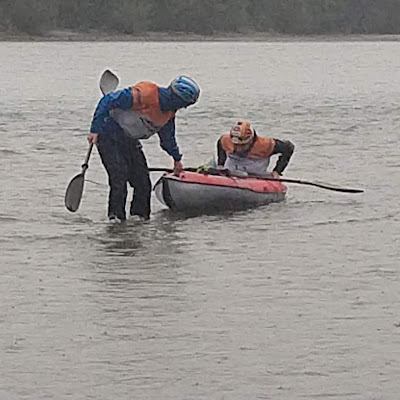 Portaging boats across the shore toward a path in the woods: 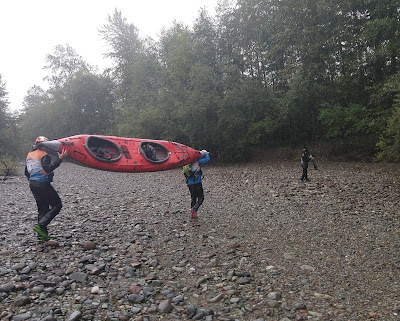 Another team not far behind: 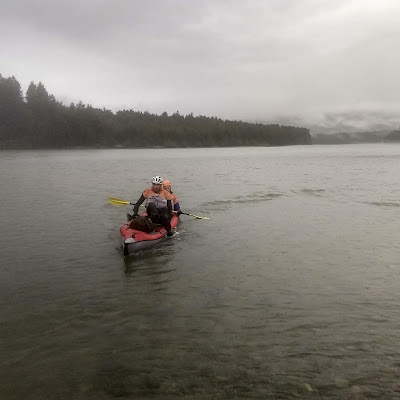 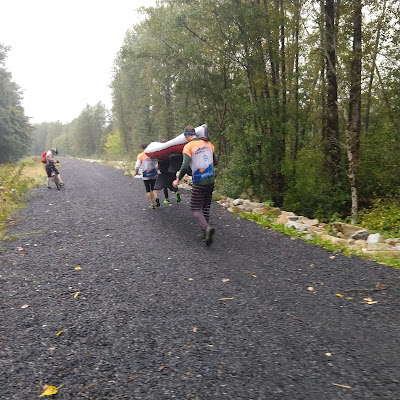 We were back at CP15 the following day to catch the rest of the teams coming through; enjoying hanging out in the rain: 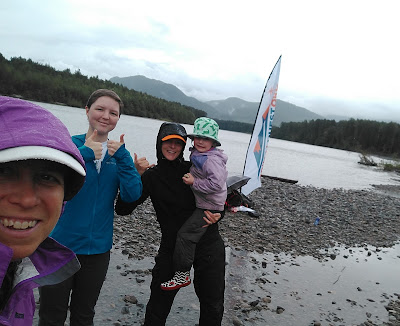 Finally when the last couple TA's were set up and all the volunteers were on their last shift, I had time to head out onto the course.  I heard from Greg who was at remote CP21 that if the final team came through at the end of the day, he wasn't too keen on hiking down by himself in the dark so he'd probably stay there another night.  Well heck, that's something I can help with.

I was directed by one of the local guides over to the gondola to give me a head start up the mountain.  Yay for views, even if it's cloudy: 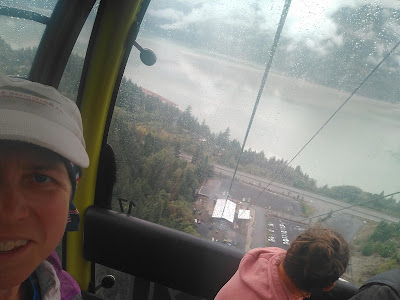 I chanced upon a team running toward me, moving fast for all the gear on their backs.  So fast I only managed a photo as they jogged away: 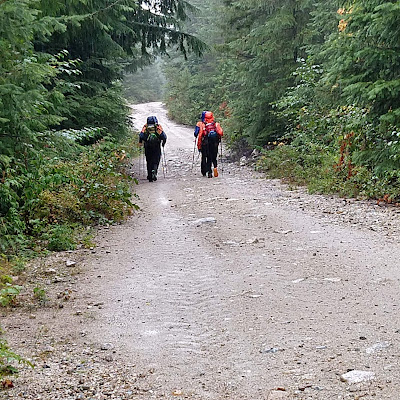 I had a great time climbing up the trails, and I had great timing as I ran into NorCal, the last team on the course, as they were working their way up to CP20.  We walked and talked together on the hike over to CP21 where we found Greg.  Greg checked the team in and out, then we waited out a brief rain shower while Greg got his camping gear packed to carry out.

A bit of a blurry selfie, but I think you can tell I was happy to be up in the mountains: 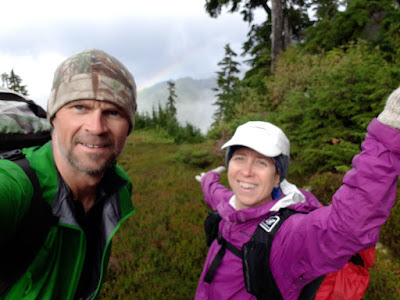 Huckleberries!  Everything was worth it for this.  We made like bears and stood in the middle of huckleberry bushes eating all the berries we could get our paws on. 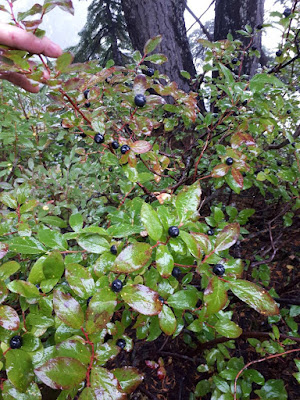 Not sure the story behind these, but they made for a funny photo: 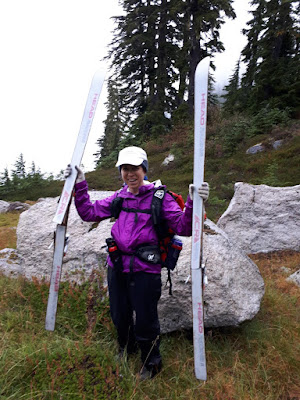 Coming down the "trail" through the boulder field: 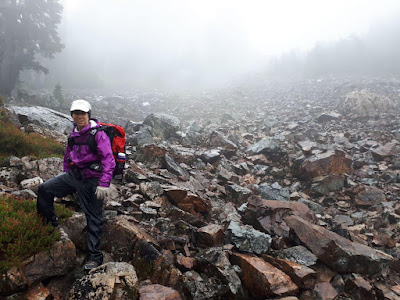 We went the long way around trails, while team NorCal climbed up to CP22 and then dropped down the steep way back to the main route.  Funnily enough, we met back up right at this point, as they emerged from the bushes.  They didn't seem to mind pausing for a group photo - thanks y'all! 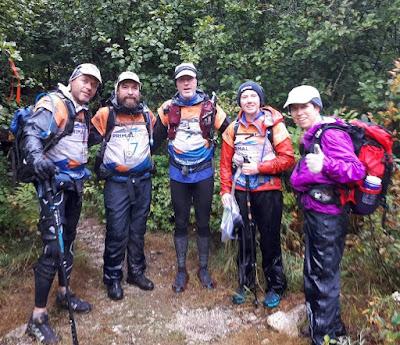 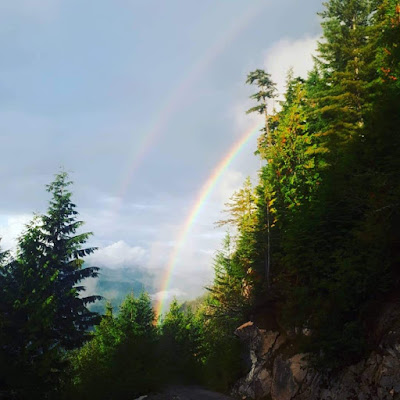 That day of hiking was my favorite of the event, what a beautiful area.

Wrapping things up at the post-race party, happy to spend time with my friend Ann: 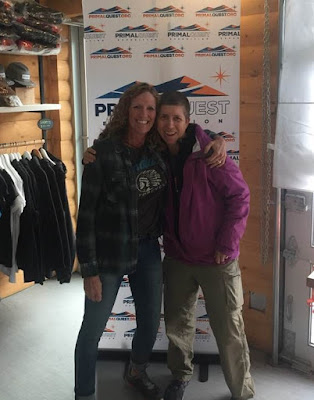 We got brave enough to ask Ian if he would pose with us - thank you Ian! 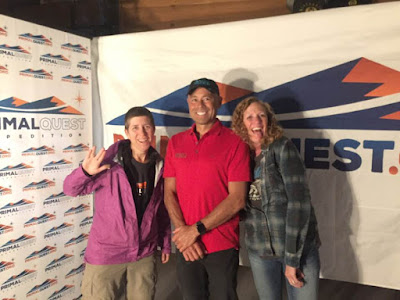 That was a whirlwind experience with an amazing group of people (staff, volunteers, racers, local folks), and it was wonderful to meet everyone.  I look forward to returning to BC someday - with John and with more time to explore!