Yesterday John and I plus Kip and Dave did an urban race in Dallas. High Trek Adventure has been renamed CitySolve, and this year the national championship will be held in New Orleans. The top 3 teams in the local races win free entry, so that's what John and I were playing for.

We were relatively patient at the start, waiting until we had the answer to the multiple choice question about the number of people in the Dallas Cowboys Ring of Honor and then making note of the street intersection that corresponded to the answer (17). John booked it down Leonard Street and we got our clue sheets.

We noticed one checkpoint located close to the Cotton Bowl, which meant we could take the green DART train in that direction. I worked with our crew while John asked a local for help finding Exposition Ave. We got a couple answers in that area, including checkpoint 5 right at the Fair Park train stop: 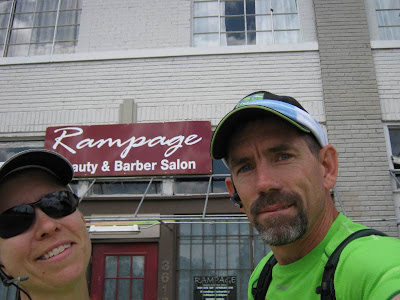 The "Detour" checkpoint required finding specific items related to "cotton" or "gin". While we were standing right next to the Cotton Bowl, we decided we ought to get our photo with it (slight zoom may be required to see it!): 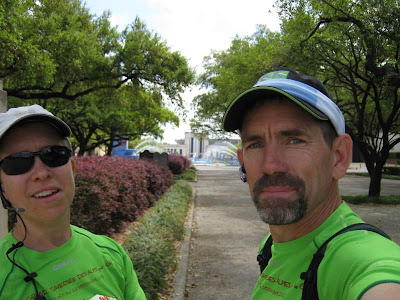 Then we ran back toward town on Exposition until we came across this likely NCAA conference name (Big Sky) for checkpoint 1: 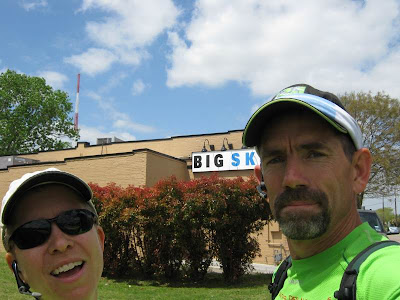 Sheila helped us locate the Orange Salon for checkpoint 9 where we passed Kip and Dave heading in the other direction - hi guys! 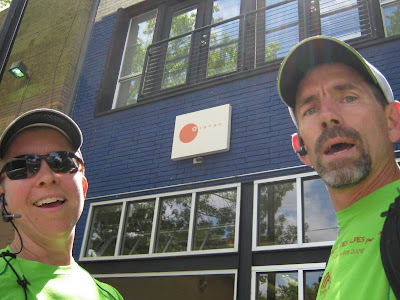 We headed to the Baylor DART stop, but belatedly realized that it would be another 10 minutes before the train arrived (containing Kip and Dave, as it turned out!). Instead we ran back toward downtown where we located "Joule" for checkpoint 10: 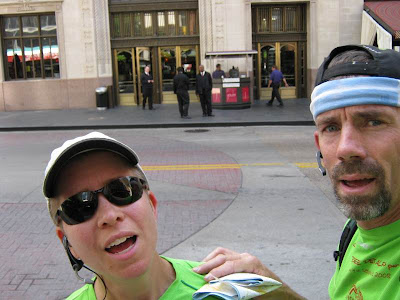 Then slightly north to the Backbeat Cafe as checkpoint 3: 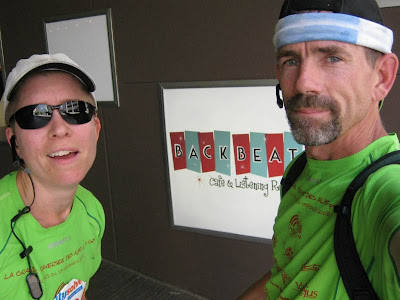 We made a slight detour over to the Asian Art Museum where we needed to fold a piece of paper into an origami lotus flower. It seemed straightforward until the "pull the corner through itself" type of instruction, which stymied me. The lady there took pity on me, showing me how to do it on one corner of my paper. That still didn't help, so she did another. Finally I shmushed the other 2 corners into a bit of a mess and she called it "good enough!" Phew, that was rather clumsy. Thank you, nice lady! 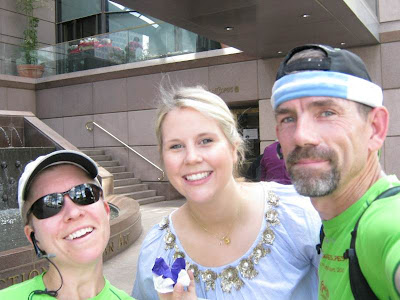 John led the way north from there, over the freeway toward the American Airlines arena. Luckily our crew is on the ball, because I had it in my head that the Dallas Mavericks still play at Reunion Area. I'm not sure I can imagine going there and finding that it had been demolished...

Instead we went to the right place, where we found checkpoint 6: 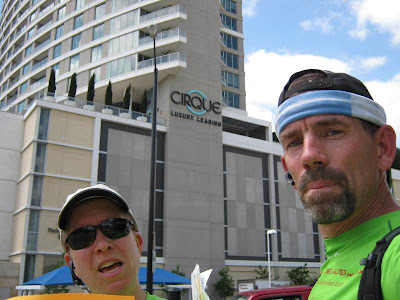 We made a tour of the arena plaza until we finally got ourselves oriented across the street to find checkpoint 4, the Ghost Bar: 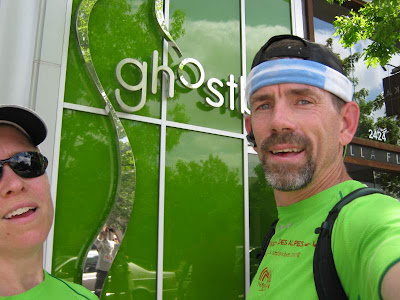 Interestingly, we just missed Kip and Dave who had passed by only a couple minutes earlier. They left for the mural in the West End, while we started for the finish line. The next 15 minutes involved a communication snafu that left us backtracking to a CVS where we located the remaining "cotton" items for checkpoint 7: 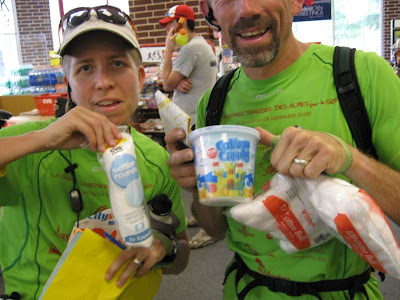 Finally it was time to head to the finish! Even with the backtrack and extra 15 minutes, we were the 2nd team across the line (after Kip and Dave). Way to go, teams! Well, except that one team came in soon after us with 25 minutes of bonus time for two extra photos: One person with a lasso and cowboy hat, plus 3 photos of people wearing Dallas sports teams paraphernalia. That put them into 1st, Kip/Dave in 2nd, and us in 3rd. We still got free entry into New Orleans, so mission accomplished!
Posted by Marcy at 8:33 AM