The CAT-100 was originally a low-key 100-mile event with a few (25) entrants, running along the Catoctin and Appalachian trails in western Maryland.  This sounded like an interesting "training" event for me, and a chance for us to visit with Kathy and Bob for part of a weekend.

Various events, including a permitting problem, conspired to change the weekend up a little.  Gone were the trails from the official race, now it would be run in two 50-mile sections on the C&O towpath along the Potomac River.  This sounded nice, for about 1/3 of that distance.  I'm nowhere near trained (not sure I ever would or could be trained) to run 100 flat miles.  Not just somewhat flat, but super-duper flat with only a slight rise/drop over the 25 miles of towpath the race would cover.  At least it was a nice surface (crushed gravel) and not pavement.  I decided I would try for 50 miles of that, and then do my own thing for the 2nd half of the training event.

It was fun meeting Jim the RD and other runners from the area.  Everyone was very nice, the volunteers were great, and the area was so pretty.  John had a good time exploring, in between supporting me and jumping online to help with a couple teams doing the Austin GUR race on Saturday (they came in 1st and 2nd, yay!).

The actual running - not too much to say about that.  Luckily John took some pictures so I can just summarize.

First 20 miles felt smooth and fast - I wasn't sure how long that would last, so I went with it, staying on the "easy" side of the effort.

It's not often my running pictures actually look like I'm running: 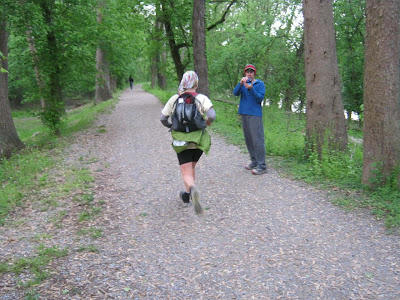 The towpath was scenic, green, very pretty, and since I was going to see each part only twice (out-and-back upstream, out-and-back downstream) I didn't mind the sometimes monotonous feel in certain stretches.  It was great running next to a river again, especially in the area that had some little rapids and a bunch of geese (and later in the day, rafters).

John looking across at Harpers Ferry and looking down at me on the trail - see me way down there? 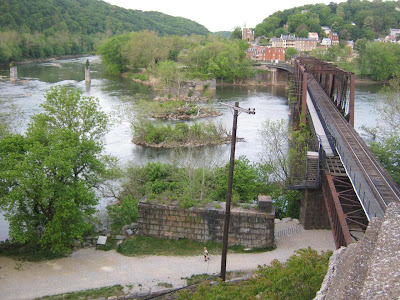 Hi John!  The guys running behind me caught up and asked me how he got up there.  I could only say that John is a mountain goat. 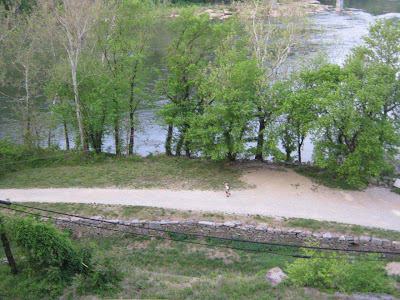 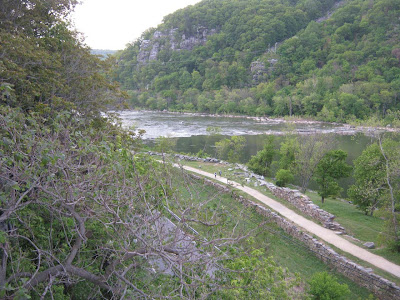 John enjoyed driving to West Virginia and Virginia briefly, learning some of the history of the area and the tow path itself.  Apparently there was a race between building the railroad and building the canal.  The railroad won. 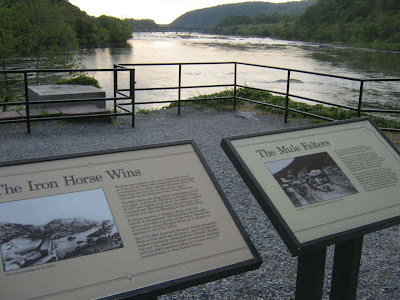 John ran with me for a few miles here and there, and it was fun to talk with him in between catching up on my podcasts (by the way, we just discovered "3 Non Joggers" and they are too funny!).

At the 30-mile aid station taking a short break: 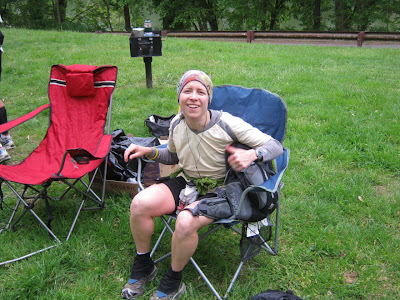 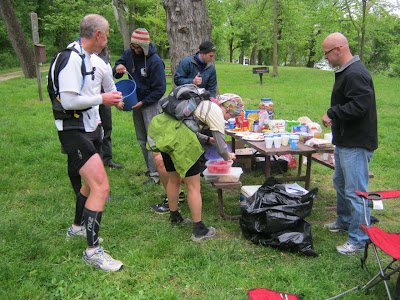 The volunteers were so great, we appreciate everything they do. 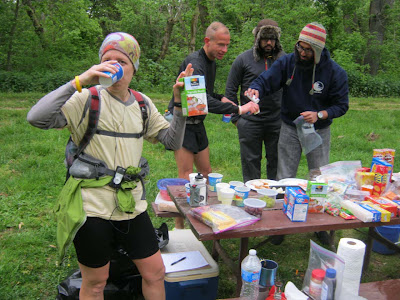 And I appreciate my husband! 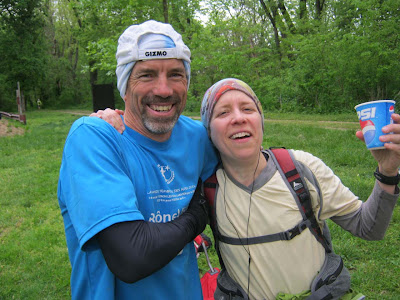 Back on the tow path.  The last 20 miles got tiring, not at all a surprise.  But I was happy to be heading back to the start/finish, glad to be aiming to get off the tow path.  50 miles of flat running starts to wear you down. A bit of speed-walking every mile helped.  By the time I was done with all that, my quads were completely shot.  I'm about trained for one flat marathon, not two in a row... I cannot even imagine how other runners did the whole 100 miles there, wow.

Interestingly, the slight rise on the way back (vs. the slight drop on the way out) made a difference and a nice change of pace on my legs.  It ever-so-slightly changed which muscles were taking the brunt of the work, and I was still mostly running by the end of the 50 miles.  Squatting to use the bathroom, however, got really difficult by the afternoon.

It was a really nice day for running - cloudy and cool, barely any rain.  Birds singing, a relay race going on at the same time, hikers, bikers, lots to see.  I couldn't complain! 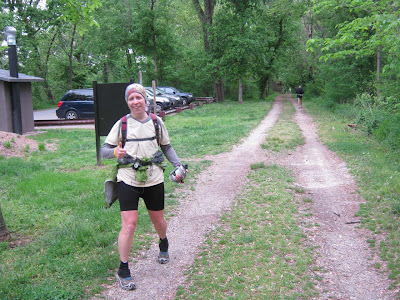 Back at the start/finish, studying the maps to get started on the next 50 miles: 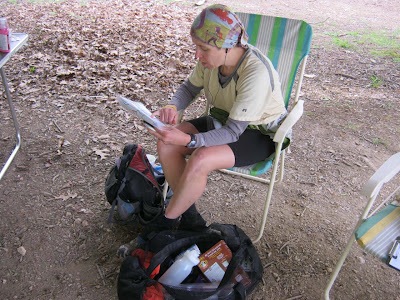 My "non-race" second half of the training started back down on the tow path for a few miles, a hilly climb up to Maryland Heights for a nice loop and some great views, and back down to the tow path to find the AT and John.  I was heading north now instead of east-west, happy to finally feel like I was going somewhere. 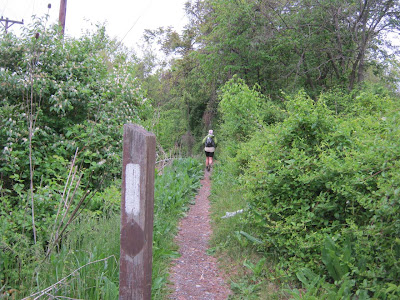 Starting on the AT was great - we have been near it but not much on it over the years, in Georgia, Virginia, New York, Massachusetts, and Vermont.  I was dang excited to finally be speed-hiking on it for real.  I crossed under a highway and started climbing to the first ridge.

There was a sign near the start of the trail, so I went to check out the map.  It was here that I had a "Bill Bryson moment" - I could see where I was starting out at the southern border of Maryland.  I scanned upward to see how far into Maryland I was planning to go.  Up - up - all the way to the top!  What?  That certainly explains what "Pen-Mar" means - Pennsylvania-Maryland, the northern border.  That was slightly stunning; we had talked about maybe doing sections of the AT in the form of one whole state at a time, but I had missed the concept of doing it this actual weekend.  It's not the widest part of Maryland by any means, but it was still weird to think about.

That kept my mind busy while I climbed up through the trees.  The trail was a bit rocky but for the most part much better than the Long Trail in Vermont.  Along the ridge at the top I wished my legs weren't so tight from the first 50 miles, as I would have loved to really run it.  The legs never loosened up like I had hoped, so I tried to run a bit here and there.  But mostly focused on speed-walking as fast as I could.

It got dark.  My handheld light nearly ran out of battery by the end of the section, but I made it down to Gathland State Park where John was waiting.  Kathy and then John's dad both called while I was sitting in the car, that was pretty funny.

In the next section it rained on and off.  Part of it was rocky and slow, but then there was a really nice runnable section and I made up some time.  Coming to the car I discovered that Kathy and Bob had driven an hour just to see us for a bit, how sweet of them!  They had a crazy busy weekend and we didn't know if we were going to get to see each other at all, but happily I got to say Hi and John got to visit with them for a while.  Thanks y'all!!

Getting out of the car was chilly but I was climbing again so I soon warmed up.  The climbs were never too long, just long enough to stay warm in the cold, clammy night.  This next section was short on mileage but long on challenges.  I found the George Washington Monument park, had to figure out the trail a couple times, and checked out some sign boards about GW's life along the way.

The AT followed a footpath toward the monument but then diverged.  I debated going up to see it, but decided not to make the trek up the hill.  It turns out that the subsequent downhill was hard enough as it was, so it was probably good I had not made it any longer.

Here began the tough part of the trail (at least with the condition of my legs) - large log steps every few feet.  I'm sure they are good for reducing trail erosion and such, but they were quite difficult for me.  My left knee (the one I fell on 2 weeks ago) had been aching a little all day, and these steps really did a number on it.  I carefully stepped down each one, favoring the aching knee.

Another uphill (with log steps), another downhill, and another, and another.  I could hear the highway a long way away (time-wise, if not distance-wise).  Eventually I got there.

Crossing over the interstate on the AT bridge at night was really cool.  I'm glad I got to do that.

On the other side I saw a sign toward "Annapolis Rock", and I didn't think I should be heading in the direction of Annapolis, so I took the other trail which seemed to head toward a parking area.  Luckily I chose correctly, and our yellow rental car was parked and waiting (with John inside napping).

I wasn't really excited about getting back out of the car, but I put on more clothes, drank my Gookinaid, Ensure, and hot coffee (yay for hot coffee!), and took a 10-minute shut-eye.  Then John walked me out as I told him about my achy knee.  I was shivering a lot but knew that I had a big climb (yes, up to Annapolis Rock, which apparently is nowhere near the city it is named after).  Thanks John, see you when it's light out!

The climb warmed me up quickly.  I even took the quarter-mile side trip to see the scenic view from the Rock, but couldn't tell much about it in the darkness other than there's another town to the west.  Back on the main trail, I just tried to keep moving, not kick too many rocks, and be patient because this was a long section.

Partway along, there's a drop down to a creek crossing, and here is where my left knee gave up for good.  Every downhill step was painful and my leg didn't so much want to bend.  It was an easy decision to give up on the final 10 miles and stop after the end of this section.  It was a lot harder to actually get to the point where I could stop.  I still had about 6 miles to go.  At least it was uphill and then flat along a long ridge until the last drop at the end.

Finally it was like whoever built the trail said "Hey!  We don't have to be directly on TOP of the ridge, we could put the trail a little lower and it would be a lot nicer".  Thanks a lot (sarcastically) to whoever routed the trail through the boulders in the first place, and Thanks So Much (heartfelt) to whoever came to their senses and found the bench below the ridge.  I was still walking, but with purpose and without curses.

The sun shone on the ridge, and while I was still in shadows, I was happy that I had made it to morning.  Eventually John appeared - Hi John!  He had hiked up to find me, and I was almost to the downhill.  It took a little while to get down, but I made it, and I was done.  90 miles in ~26 hours, works for me  :)

Waving "goodbye" to the last Maryland section of the AT - next time! 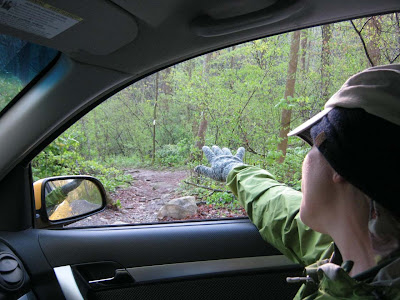 Sunday was a beautiful day, including warm sunshine, a trip to Waffle House, more time visiting with Kathy and Bob (that alone was worth stopping early), lots of sleep, and repacking.

Monday we got home to our new toys... 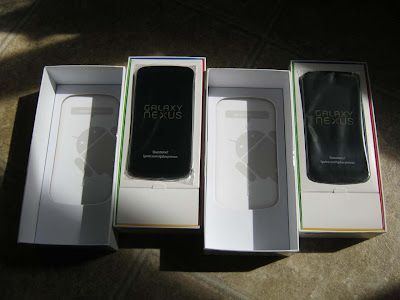 Time for the Beards to get into the 21st century!