Last weekend John and I drove to Vermont to spend some time with my parents and to run the Vermont City Marathon.  It was a gorgeous weekend and a really nice time with Mom and Dad.  In lieu of race photos (maybe the race photographers will post some eventually), here is how we spent some of the time while not racing:

Pretty flowers in their yard: 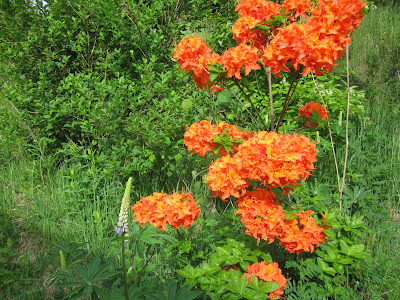 Clearing a path up the hill: 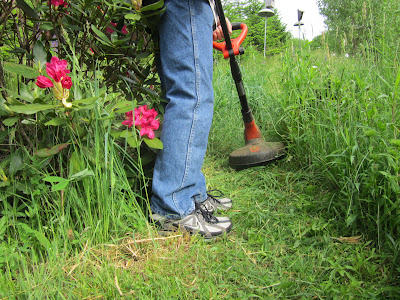 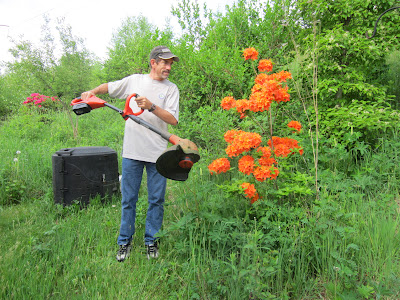 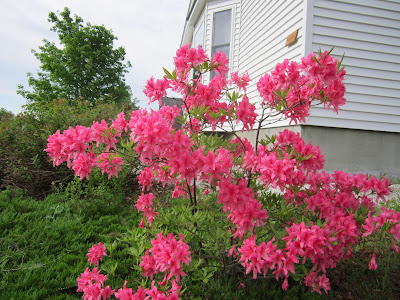 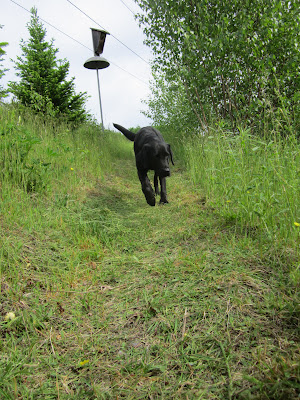 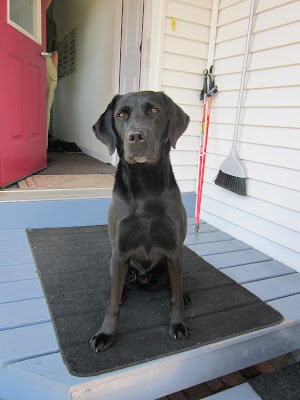 Prepping for the race: 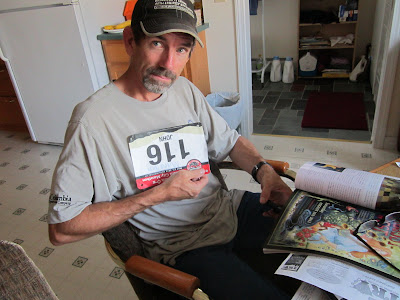 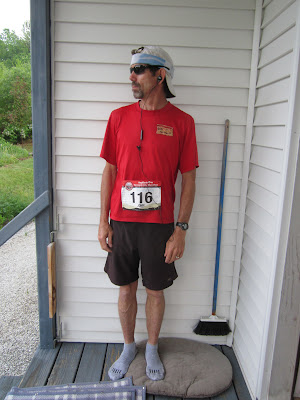 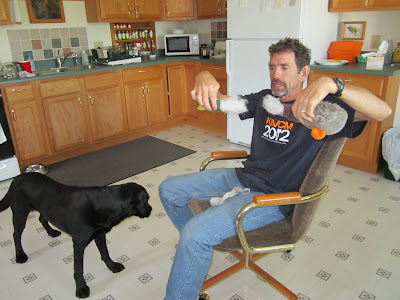 The actual race was fun!  At least most of it was, for most of us.

Kip and I have run the Vermont City Marathon previously, more than 10 years ago.  We liked it for the course - very pretty, slightly hilly but not too much, and especially because it runs through the middle of the city 3 times for excellent race viewing and crowd support.  That was all still in place, plus the event had grown a lot.  Well organized, tons of marathon and relay runners, and fantastic cheering sections.  Not just in the middle of the city but in all of the neighborhoods - people handing out water and food, hoses set up to water you down if you wanted, people playing all sorts of instruments, and basically everyone hanging out for the morning to cheer us on.  The miles flew by and it was all entertaining.

Last week John helped me find a comfortable sleeve/brace for my knee, although I still wasn't sure how many miles I was going to be able to run before my knee called it quits.  I took it real easy from the start, intending to employ a run/walk strategy.  Instead, 9-10 minute miles and running as smoothly as possible seemed to do the trick.  Oddly, walking was harder on my knee than running after several miles, so I was happy to keep running!

I saw Mom at mile 3 and gave her a kiss before running up Church Street.  An outdoor cafe had tables right next to the course so we got to see what people were eating for breakfast  :)  Relay runners dressed in superhero costumes.  The lead wheelchair came barreling down the hill going the other way, wow!  Military guys running with ruck sacks.  Fun listening to conversations around me.  Most creative sign = "Most boring parade ever" (couldn't resist it as the title of this post).

On the out-and-back in the "rural" section (it doesn't take long to find farm fields in Vermont) I saw John about 2 miles ahead of me.  We both ran on the median toward each other and swapped a high-five.  He was looking great and running well.  His challenge was likely going to be a lack of long training, but 7 miles seemed to be easy enough to start off.

I started in the back/slower crowds and did very little extra work to pass anyone, content with a very easy pace and taking in the whole experience.  It turns out that marathons you aren't serious about can be great fun, especially one with bands and cheering sections and beautiful scenery.  Quite a difference from our regular quiet trail running, a joyful break from normal.  If you can call anything that we do "normal" in any sense of the word...

Back in town for pass #2 down Church Street, an Irish band really jamming, then there's Mom again!  She had bought a cup of coffee for John around mile 10, and she told me that he had passed by about 30 minutes earlier, drank the coffee in 3 gulps, and was looking good.  Great to see Mom on the course several times!

Down the southern section of the course into some neighborhoods.  Picked up a gel from a water stop, I'm getting better at sucking those down since my road running practice last winter.  Finally found a place in the woods to relieve myself (one of the upsides of trail running in the woods - you don't have to wait so long between bathroom breaks!).  Knee still holding up well.  Passed the halfway mark in under 2:10, so far so good.

Then we hit a new bike path section (new to me, anyway) - right next to the lake, nice breeze, sunshine, I was feeling great.  I finally had to just let loose and "run" for a while to see what would happen.  It was good!  I started doing sub-9 minute miles and enjoyed the next several miles back into town.

Assault on Battery Hill!  Taiko drummers!  There's Mom again!  My favorite part of the race.  I ran up the hill, grinning.

Long trip north on a main road.  Nicely punctuated by a couple side trips into neighborhoods and more friendly people, way more than our previous run here (and way more than in any marathon I've experienced besides Boston).  John told a story of running up to a group of girls to see what they were eating, and all 3 of them offered him a piece of bacon!  My vegetarian husband had to laugh and decline...

Watermelon!  Popsicles!  And a nice breeze here and there.  It was in the 70's and sunny but never really felt too hot.  I ran in the shade whenever I could and was glad I wasn't running for a fast time.

Finally the north end of the course and a turn down to the bike path home.  The steep downhill is where my knee finally spoke up, so I had to concentrate on running as smoothly as possible and not jarring it anymore on the 4 miles back to the finish.  It did start to ache and I was ready to be done.  Many people walking and running slowly, others running fast, relay runners barreling through, a bit of a mishmash but I usually had plenty of room to run.

Glad I wasn't running for a time goal - I would have had to start running faster a couple miles earlier to break 4 hours, so anything close was "good enough".

The last mile and then the finish line park - look at all those people!  Huge cheering crowds, glad to be aware that it was still 0.2 miles to the end, running on grass for a bit, finally done.  4:02:31  :)

Crazy crowds in the park.  Found Mom in the timing tent just as she was looking up my number/time.  No sign of John - ???  That was confusing.  Wandered around looking, got my pizza and Ben&Jerry's ice cream, yum.  Finally found John and he had finished after me - ???

Turns out he had been on a Boston qualifying pace up to mile 24 (24!).  Then one slow mile put him behind.  Then he tried sitting because his legs were hurting and suddenly everything cramped up so badly that he couldn't stand up for a while.  Someone helped stretch his calves.  Eventually he could walk without his shoes, and finally he was able to run to the finish.  His last 1.2 miles took almost an hour!

Apparently I passed him there, probably while he was walking (I was so focused on dodging people along the bike path).  I was bummed not to have noticed him, as I would have liked to finish together.  John was at least comforted by the knowledge that he could not have done any more on that day!  A couple miles short of the goal, so close.

Besides that, we were pleased with how everything else went.  It was great to be with Mom and Dad, and we look forward to visiting them again in 2 weeks for our next adventure race.

Until then - our first "at home" weekend in 2 months, woo hoo!