Our first urban race in New York City!  And it showed  :)

But first we got to play around for a day.  Including a "have to do this someday" walk over the Brooklyn Bridge. 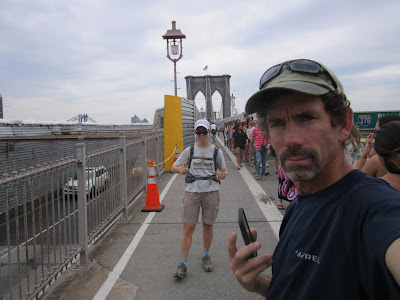 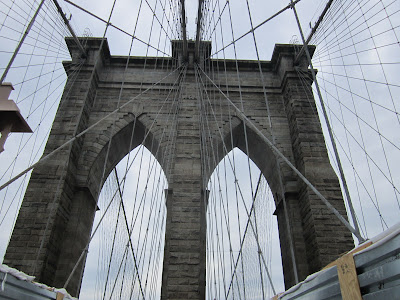 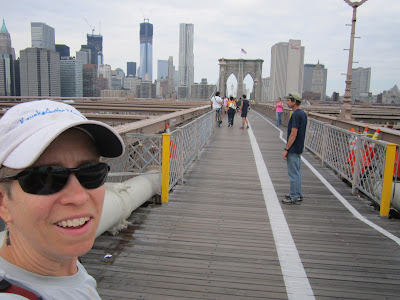 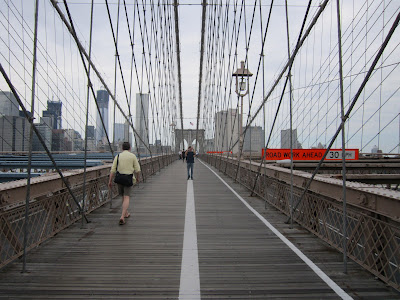 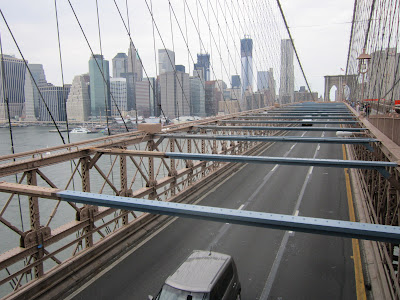 A bit of sightseeing... and playing around with public art as we are prone to doing 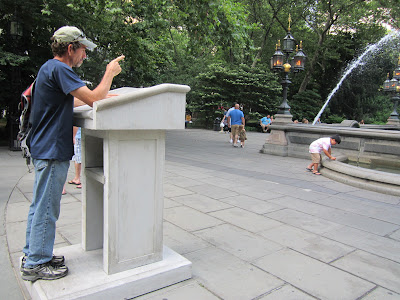 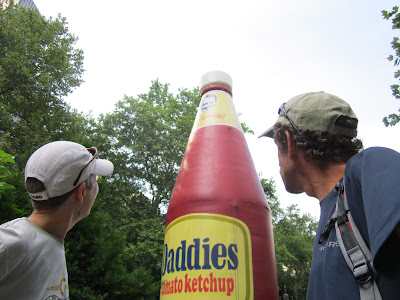 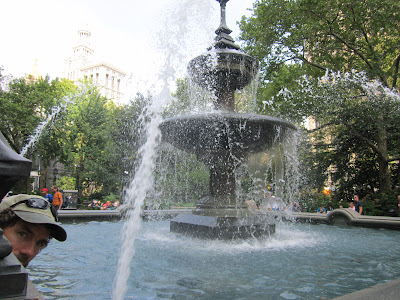 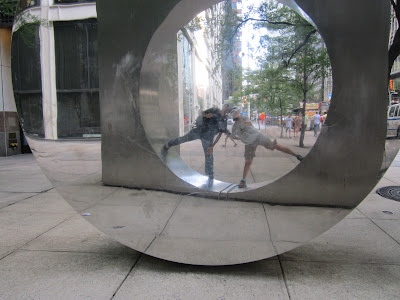 Not art but funny! 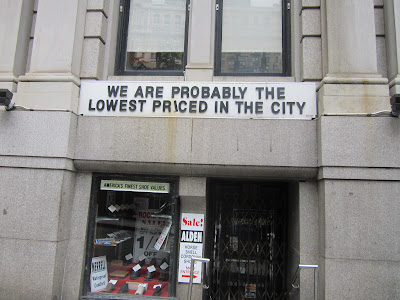 La Maison du Chocolat, mmmmm - and the first place in New York to give us a free sample of something!  We were so excited we splurged on one of these: 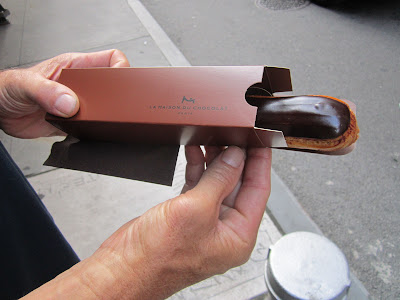 We started in lower Manhattan with this really cool sculpture of "Briefcase Man" in Zuccotti Park: 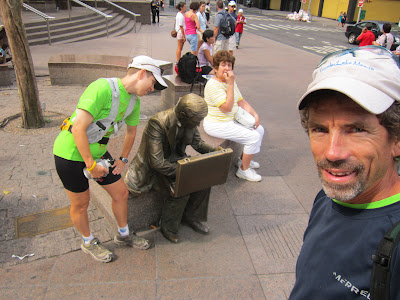 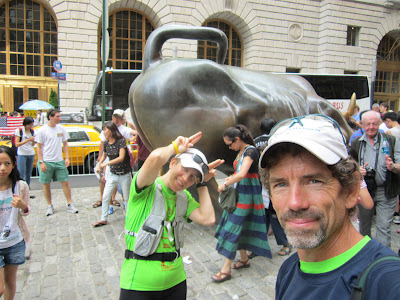 Posing like George Washington in his boat crossing the Delaware.  With some guy at the bow taking selfies...? 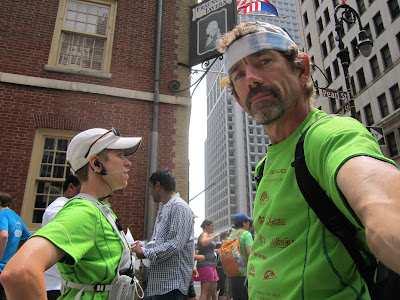 There was a woman sitting in this car, so John made sure to let her know we were just doing a scavenger hunt.  Otherwise, it could be really weird to have 2 people run behind your car for a second and then run away! 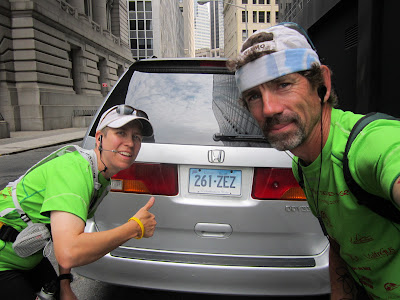 We're a bit embarrassed to admit that we are making the shape of Texas (to match this friendly man's driver's license) with our arms... not so much exactly: 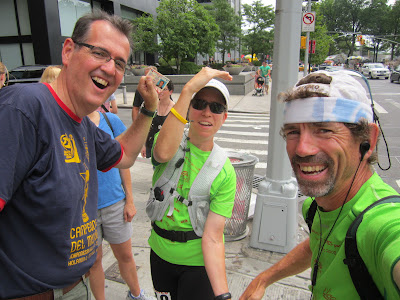 At Castle Clinton, defending the fort!  Amazingly, the cannon lit with my water bottle, and John got a good aim at the attackers, so we held them off: 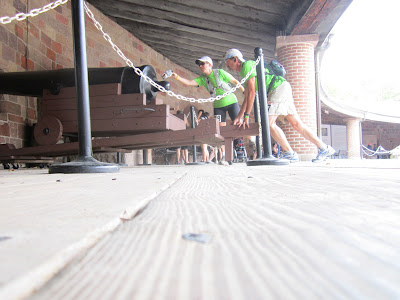 We thought we were doing pretty well, until we realized that we needed to head up to Times Square.  Oh wow, that means we need to get on a subway.  Other Challenge Nation races have finished so quickly that we guessed we would be staying closer to the start/finish.  Our bad for this assumption, and especially for not having a backup plan.

Instead, we ran around like discombobulated chickens for a few minutes trying to figure out which subway stop to use.  We ended up on the R-line and waited 10 minutes for the train.  And it was a local (i.e. slow) train.  Lots of time lost.

No help for it, we rode up to Times Square and started milling through the crowd looking for 4 people who might help us with a "jumping" photo, i.e. everyone leaping in the air (or at least some semblance of leaping).

This is a challenge for us, we're not the most outgoing people.  But we got some help from a few friends!  They seemed rather flat-footed but I made up for it with my best jump ever.  I was excited to be hanging out with the Smurfs and Spongebob. 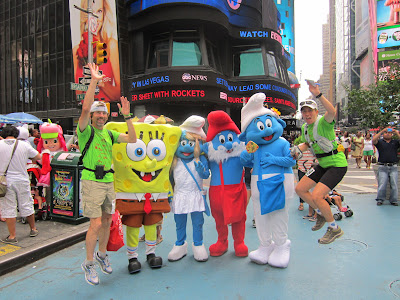 A couple blocks away to find this giant needle (there is a button too) - love the kid trying to climb it: 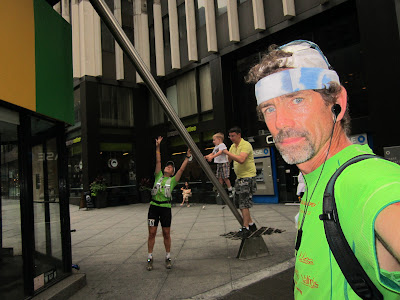 And a side trip to a fire house to pose like firemen at work - I think John is getting the hydrant open, while I'm about to chop something (I apparently didn't learn much about how to use an ax from watching the Death Race): 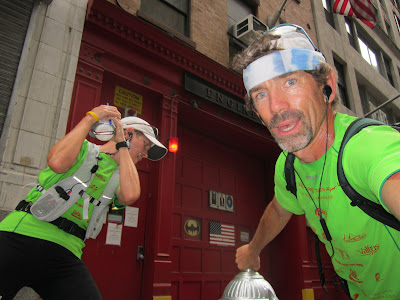 A few blocks south to find Mr. Seward and pose like him (or in my case, pretend I'm on stage?): 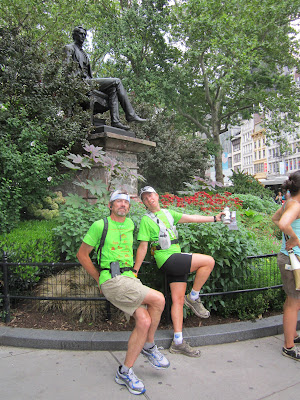 We finally found someone with a non-NY college sports shirt on!  This guy was originally pretending to spin a basketball but at the last second apparently decided to give the thumbs-up (or in a pinch you could say he was calling a jump ball): 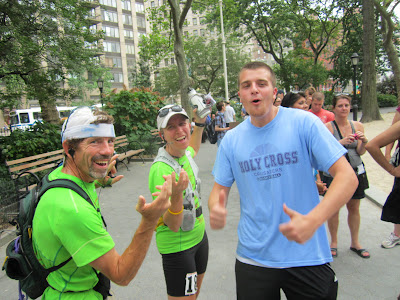 Back to the finish line - 4th place!  That gained us free entry into Nationals in New Orleans in December, good enough for us  :)

We hung out at the Dubliner where we met Team Ramen Noodles and had fun talking about the race.  I'm still not used to having people know our names, but we always enjoy meeting them.  So come introduce yourselves anytime!

It was a fun race and a fun weekend.  We especially love having to come up with creative poses - we should keep practicing that...