Refreshed and ready to ride!  Time to tackle our last bike leg, with an orienteering relay in the middle.  We packed up and left the Sugarbush TA for the last time. 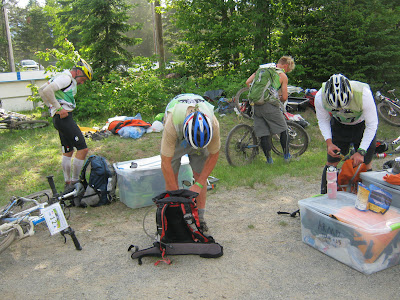 This time, the convenience store WAS open, so we rode a bit out of our way to make the important DEET purchase (along with some soda, snacks, and an apple for me).  Happy days!  The only error was in not buying a 2nd bottle of bug spray (I went with a small one for the sake of weight, but we ran out the following day, boo!).  But for a while, we were relieved to be bug-free.  We watched bugs fly at us and then veer at the last minute like "whoa!  big mistake!  find someone else to bite!"  Mosquitoes still hovered around us, like they were waiting for the stuff to wear off.  Dang bugs.  Worst part of the race, truly.

We formed a pace line and sped down the paved road, taking turns leading the way and coasting/peddling in high gear.  What a blast!  We grinned and laughed our way down the road, happy to be getting somewhere quickly.  After the road leveled off we found our turn-off toward the Maine Huts and Trail system again, following a dirt road up a little ways to a trail.

John was around this area in the car (although we didn't see him) - this might be us or it might not be: 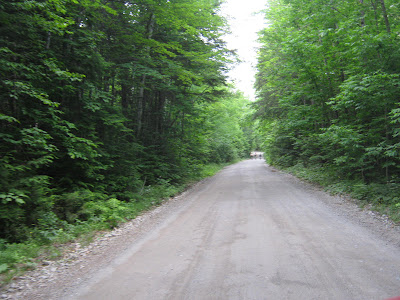 The trail was fun, until we had to take a side trail to find a checkpoint along the way, then it was slower and more technical, but overall it wasn't too long.  I was cautious in places with a drop down to the river on the left.  A couple wood bridges and a bit of windy trail later and we passed a pretty waterfall.  There was a checkpoint flag next to it, so we all made a note since it was obviously part of the upcoming orienteering relay.

Then there was a set of stone steps to carry the bikes up... then a bit more trail and we located the next hut.  Here we found an oasis in the middle of the race.  What a lovely spot!  Druce started with the first leg (the long and hard one) while the rest of us organized our gear and settled in for a few hours of waiting and running.  And eating (the hut folks were selling fruit!  and coffee and brownie and cookies!) and chatting with other racers.

I had the best time talking with other teams, checking the in/out sheets to see what other teams were doing, snacking, and then using the bathrooms to clean up (running water again!) and get my feet squared away.  After several mostly-dry sections and lots of cleaning, my feet were in great shape, only one little blister on each one and no pruniness or hot spots.

Dima mentioned that he had lost his bottle of Pepsi, and he figured it must have fallen out back at the stairs.  So he didn't have any soda while he hung out and rested - in a wheelbarrow?? 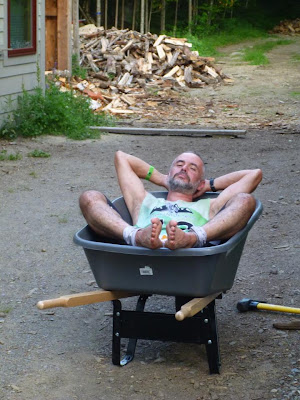 Druce (and many other racers) had problems with one of the checkpoints, so he ended up bailing on it and heading back out to clear the rest of his course.  He came back after dark to catch its reflector in his headlamp, and that worked great.  OK, my turn!

I took the long/easy course (Dima wanted a shorter one), so I was off and running down the trail.  After a bit of orientating myself to the map, I ran down one road and found a CP just off an intersection.  Then down the stairs to the CP near the waterfall we had seen earlier.  I was cruising as I came back up (picking up the bottle of Pepsi that was indeed sitting on the stairs as Dima thought), circling around to a bridge to a trail on the other side.

I put the Pepsi bottle down at one intersection, intending to get it on the way back, but then noticed a shortcut up to the hut, so I figured I would go get the bottle later.  One CP on an out-and-back, and I was back through the TA on the way to find one more to the east.  Dima was waiting, and I told him it would be about 20 minutes, so he could wake up Val from his nap soon for the next leg.

Running easily down the trail for about a kilometer, my legs and feet felt great.  What a joy to actually be running, with hardly anything in my pack (just the mandatory individual required gear and the Spot tracker).  I was humming along when somehow I got off-trail and into the woods.  Odd.  I worked my way back to the trail and continued onward, but it was going uphill and that meant I was too far.  Had I missed the "junction" in my detour?

A headlight came toward me, a racer from Denmark who had not found the CP either.  We decided to attack this one together.  We worked backward to a point in the trail that seemed to be west of the CP, went over to the creek to verify our location, found a CP reflector, and made our way there to find that it was the wrong one (it was on Druce's course).  Back to the trail, I started pace-counting to the approximate right location.

Right at about the correct spot, there was a small clearing to the left.  I peeked around a bush and found the CP hiding behind it.  Argh, well, it was mapped right but it wasn't exactly an "easy" point since the junction from the clue wasn't obvious.  I called the Dane over (assisting a couple other folks in the process, but it couldn't be helped) and took off back up the trail.

Back to the TA (yeah, that was more than 20 minutes), now it was Val's turn with the short/easy course.  Val doesn't have much orienteering experience, but enough to figure things out.  He got his map, and I helped him with some hints on what to look for (the bridge I had crossed, the waterfall we had ridden past), and pointed him down the right trail to get him started.  Go Val!

I finalized my footcare and then took a walk to get the Pepsi bottle.  But it was gone!  Ah well, at least it's not still sitting in the woods.  I went into the cabin that was designated for racer sleeping, but it was super hot in there and I just didn't feel like trying to find my way in the dark to a cot just to lie in the heat.  So I went and lay down on a bench outside for a while.  Some sleep here would have been really helpful, but I didn't manage to catch any.  The stars and night sky sure were beautiful.

Val came back pretty quickly, well done!  He had only one minor issue with a 2nd waterfall, but figured it out and also brought back Dima's Pepsi bottle that he had found where I had left it - too funny!  More funny was that there was less soda in it than when Dima dropped it, so someone else had found it and drank some.  The strange story of a bottle of Pepsi in the night.

Dima took off for the final leg, the short/hard one, and I hung out in the main hut drinking a bit of coffee and getting my stuff ready to throw back into my pack (we were all switching off carrying my pack with one set of required gear).  I noticed a trail/road map on the table, with notes about the various local area huts, and compared it to our topo map.  We had planned to take the trail out of here, but I could see now that there was a nice road that would get us out a lot faster.  So I studied it and had a strategy in mind by the time we congregated waiting for Dima to return.  Druce got up from his nap and Val was ready to go.

The Danes finished the course and left shortly before us.  A couple teams had arrived and started the relay and I was pleasantly surprised to see that NYARA and AR A Decade Later were behind us.  In fact, besides the 10 full-course teams, team GOALS was the only 4-person team ahead of us on the short course.  That was rather exciting.

Dima finished his leg in fine fashion and we were ready to ride.  The nav out to the road went great (especially with an assist from Val and Druce in locating a trail intersection) and then we were on a beautiful dirt road.  A race U-Haul truck passed us, which was great information but we could have done without the dust...

We rode the little ups and downs quickly, everyone seemed to be feeling good, and I enjoyed this nighttime section a lot.  Eventually we made a couple quick turns and popped out onto the main paved road.  OK, my nav here is done  :)

The road ride went on a ways, including a long uphill, but it was smooth sailing.  We passed the Danes at the start of the paved ride, but they passed us back when we stopped to get a read on the map as we figured out exactly how far to go and what to look for up ahead for the turnoff to the next TA.  Everything was quiet and dark, no issues, just riding along with me wondering about the packrafting challenge ahead.  On the Dead River?  Really?  Anyway, first things first...

John took this picture at the end of the lake paddle (which only the full-course teams did) at the next TA: 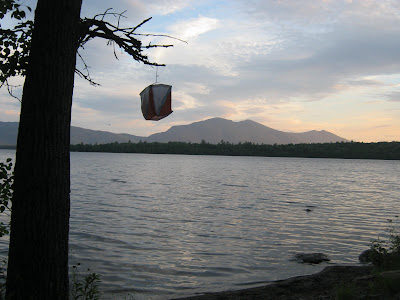 We saw only a dark parking lot, the U-Haul truck, a nice volunteer, the Danish team, and our gear boxes.  Time to weigh ourselves down again, last leg carrying the packrafts and all the accouterments!

For kicks, here is an email update that John sent out to my family after we left this TA, as he went back to Sugarloaf to get on the internet:


"Marcy and the gang arrived at the end of the paddle (on bike, due to being short-coursed) at 1:50 am as reported on the race site, but expect that they also arrived at the next CP by now though the site doesn't show it.  They seemed in good shape last night, so probably made it to CP34 in 4-6 hours unless they encountered some serious sleep monkeys.  (Speaking of that, I just saw 4 zombies with trekking poles wander past my coffee shop window.  Shhh, they just came back and they're now in the building!)  I expect Marcy to finish later today, probably before dark.  Jinx!!

I saw that Pepsi bottle when I was running the short-easy course! If I'd known it was Dima's I would have picked it up :)