An interim post, playing double duty as the answer to the question, "Why has Marcy not finished her UNE race report yet?"

Because we spent the weekend in Rhode Island, of course! (?)

Saturday we drove to Providence for some Urban Dare racing.  What a neat town to run around in!  Lots of little gems, a pretty Brown University campus, winding rivers, friendly people.

We started off the race by trying to figure out the item on the very bottom of the clue sheet (yep, sometimes I'm a bit backwards).  "Bonus: Take a team photo at the mystery location (10 minutes)"  Hmm, I like a mystery.  Would we get more info on it later?  Is it buried in the clue sheet?  I flipped the sheet over and scanned through the list of rules.  Buried near the bottom: "Mystery location. AS220"

Cool, we knew where that is.  It was on our list of possible meal choices for later in the day.  John's vegetarianism comes in handy sometimes!

We scooted on over there to get our photo while giving our crew a chance to work on the rest of the clues: 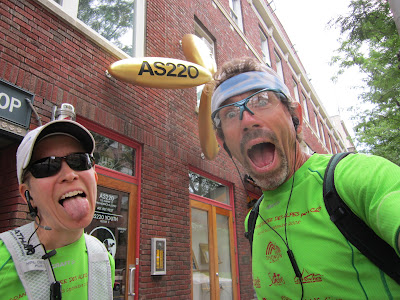 John didn't tell me in advance, but apparently he was trying to add some flavor to our photos with funny faces and poses.  Sometimes I noticed and made a guess as to how to play along.  Sometimes I just stuck out my tongue.  That seems to be my default "funny face" these days for some odd reason.

OK, back through downtown, we figured it would be nice to catch a trolley up the hill to the Brown campus.  There wasn't a trolley waiting at the main stop, so we decided we would head for South Main street for another checkpoint next.  On our way there we spotted the trolley as it was waiting for a light!  Apparently it had just left the main stop and circled a roundabout way to this intersection.  John motioned to the driver to ask if we could get on?  Seeing as the bus was idling in the inside lane and nowhere near a bus stop, we figured he wouldn't be allowed to open the doors for us, but the guy actually did!  There are some very nice people in Providence, we found.

We rode the bus up and around to Wickenden and found the Coffee Exchange: 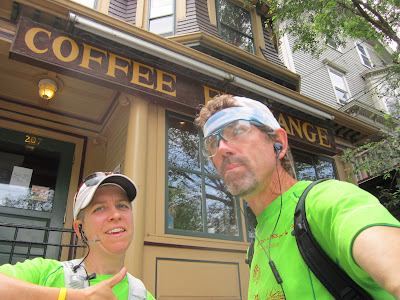 There were two women here who were excited to see a scavenger hunt-type race in progress, and our one regret is that we didn't think to ask them to help us with our "Photo Hunt" checkpoint (proposing to a non-race participant).

It was a short ways over to The Whiskey Republic: 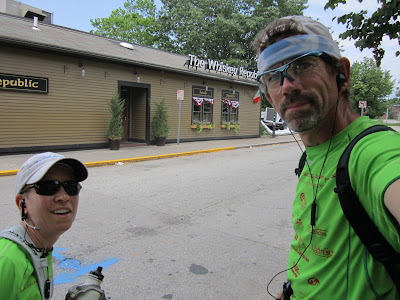 Then on up to India Point Park, across a big pedestrian bridge, and down to a volunteer for a wheelbarrow dare.

Sheila helped us find Brassil Park and we got our picture with the jungle gym: 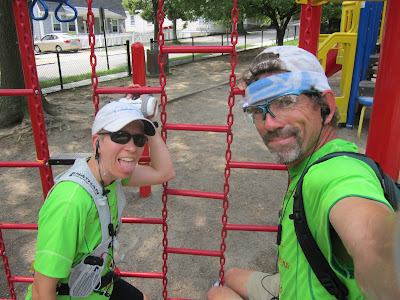 We did have to run uphill one time, but it was a pretty gentle hill up to the Governor Henry Lippitt House Museum.  It was one of several CP's that we just happened to see while we were driving around pre-race, it's always a pleasant surprise when that happens: 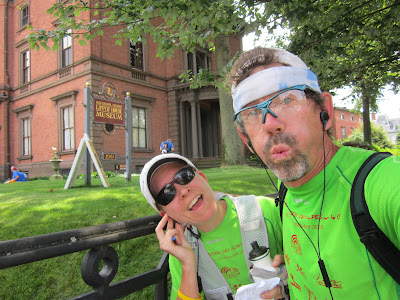 We ran down Angell Street past Thayer and found the Spellbound dare with little letter-number combos to match up to our word, "NEANDERTHAL".  We started out adding up the numbers, but learned that we only needed to list which number went with which letter.  Easy enough.

Sheila helped us figure out our way through campus to a plaque with a quote from George Washington at University Hall (just behind the woman's head): 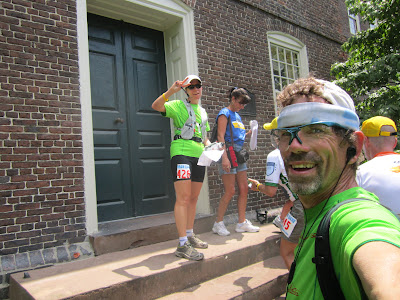 Then we got to fly downhill (whee!) to Main Street and a place called Olives.  John wanted us to pretend we had a mouthful of olives, but I couldn't hold that pose for more than a second without needing to breathe... 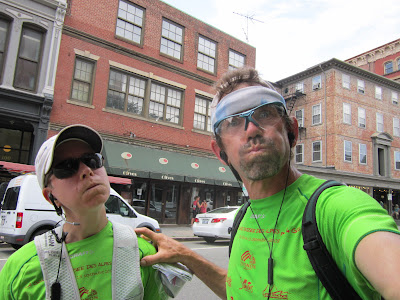 Here's where we hit the challenge of CP2.  We needed to find a volunteer for a dare at a "Cafe La France".  Except there are 6 locations in downtown Providence.  The clue sheet didn't give any hint as to which one might be the right one.  We tried several, some being inside larger buildings and not visible.  A couple others at least had a sign in front.  The one on Empire Street was actually open, and the guys didn't know about the race (except getting the same question from other racers for the past hour!) but they told us that the only other location open on Saturday was at the train station.  We had visited 5 of the 6 Cafe La France's, with only the train station remaining.  I guess we should try there?

In the middle of all that, we got our photo at the Beneficent Congregational Church: 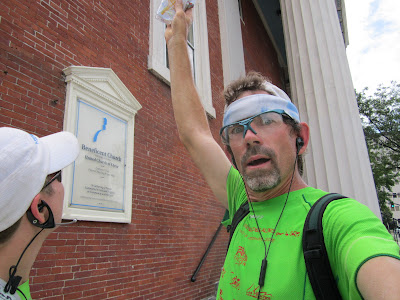 and the Time Wave clock statue: 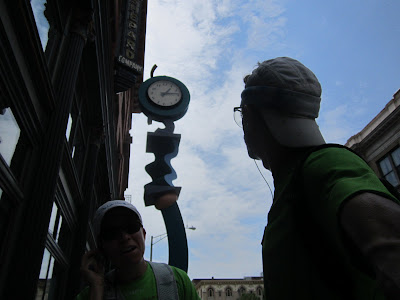 and convinced a nice lady to let John propose to her - she even played along! 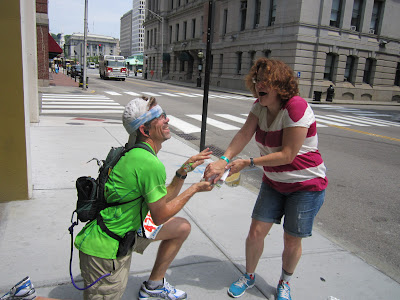 We also snapped our photo at the 5th CLF to have something to show for our efforts... 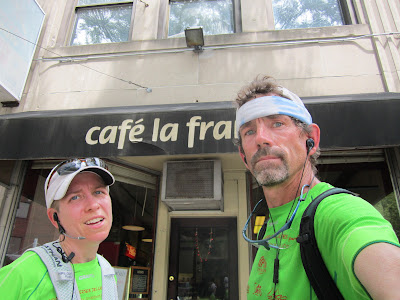 The finish line was on the way to the train station, so we stopped in to ask about this unintended mystery location.  The race director asked if we had a photo at one of the cafes, which we did, so he said he would accept it.  We were surprised but happy about that.  The train station wasn't far away but... another team had already checked in as the first team back.  They had a) found the correct location (yes, the train station) but b) did not have the AS220 bonus.  We're not sure we could have gotten to the train station and back (with the 3-legged dare in the middle) within those extra 10 minutes.

In the end, because of the RD's mistake (he didn't realize there was more than one CLF), he awarded our teams co-winners.  Excellent!  We were very happy with that decision.

Saturday evening we were lucky to get to attend the Waterfire event on the river in downtown - neat idea, a bunch of small bonfires on the water, gondolas, boats, music, some performers.  Another amazing thing we had never heard of. 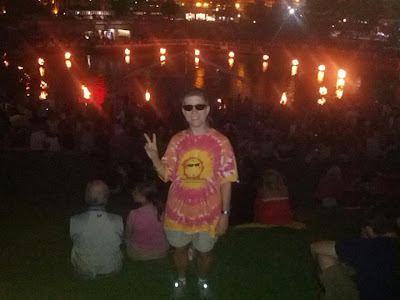 Sunday morning we drove down to Newport for a most awesome long run around the lower tip of the island.  We started with the Cliff Walk, ran along Ocean Avenue, took a detour through Fort Adams State Park, got to watch a couple "tall ships" sailing in the harbor (wow!), and gawked at all the scenery of boats and beaches and ocean and blue sky.  We were trying to actually run so didn't have a camera, but it really was a run to remember.

On the drive home we stopped for a long and difficult hike up to the top of the state of Rhode Island... 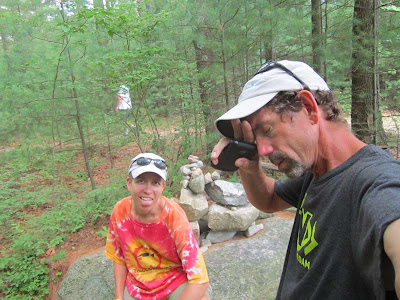 Not really, it was the shortest and easiest high point so far with the exception of the drive-up one in Delaware  :) 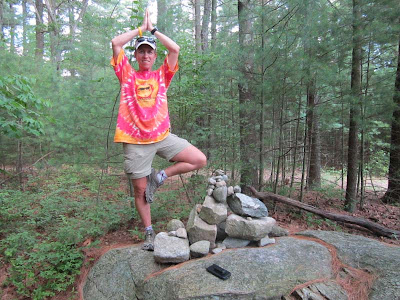 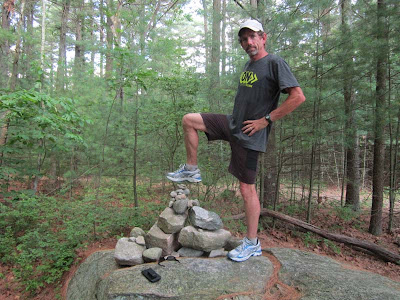 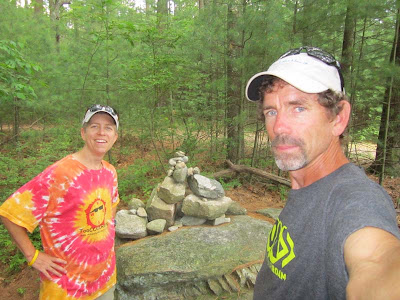 So that's it!  A wonderful weekend, another state we have raced in, another highpoint, and some beautiful scenery along the way.  Sweet.

good to see you and john on our winners list. nice blog. hope to run into you two sometime.