We finally made it into EMPAC, the "new to me" performing arts center at RPI (my alma mater).  It was alumni weekend, and although the main groups there were from classes ending in '2 or '7, apparently they don't mind if other alumnae show up as well.  Which is great because John found out that some engineers and scientists that work on the Mars Rover program were giving a talk and slide show last Saturday.  Thanks for finding this, John!

So, to continue our "Autumn of Engineering"... and I haven't figure out a better term yet, sorry.  I was thinking "Physics Fall", which would be better than "The Fall of Physics"... but anyway.  I'm an engineer, not a linguist.

Waiting for the auditorium doors to open: 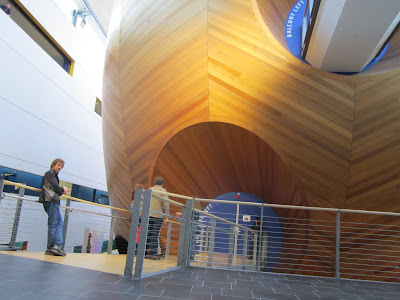 This building has some interesting design elements: 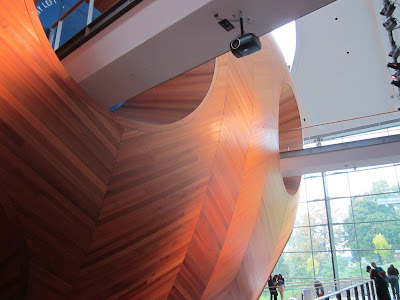 The pre-show slides were in 3-D (and yes, we have the glasses on backwards): 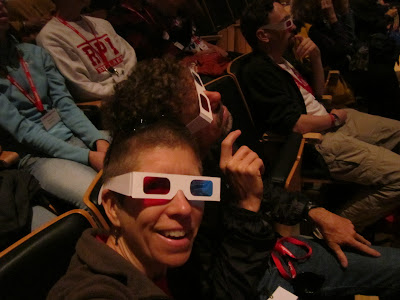 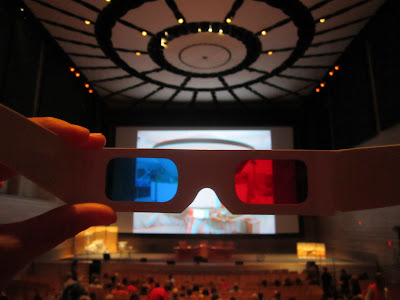 Discovery in 3-D (just put on your 3-D glasses - red goes on the left, apparently): 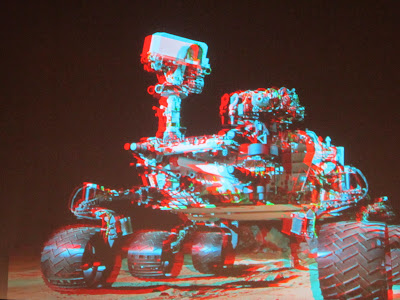 Always fun spending a few hours back at RPI: 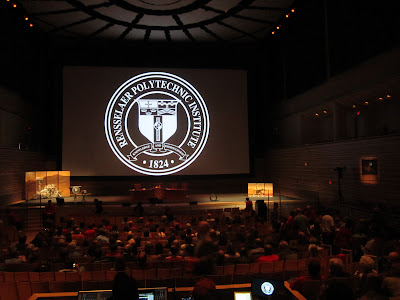 The program started with an inspiring video of the rover's landing sequence (Seven Minutes of Terror), the people in the control center, and people watching from Times Square and in auditoriums around the country. I can't find that one of the web, but here's one with a good explanation of the landing:
http://www.youtube.com/watch?v=hK5BUa45ehE

Showing all the analysis instruments on Curiosity - always great to be in a room of scientists and engineers to hear detailed explanations instead of more generic versions for a general audience.  The questions people asked were great too. 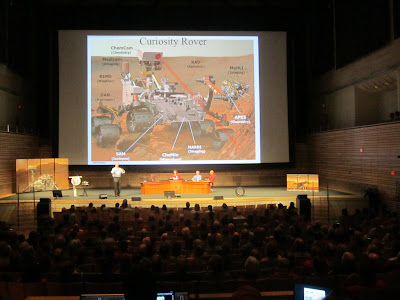 They haven't actually done this yet but it's fun to think about (part of taking material samples, if I remember right): 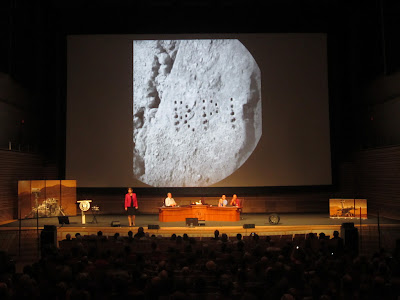 A photo of the incredible system for lowering the Rover onto the planet by cables - who thought of this and who actually decided "yes, we could make that work"??  Boggles my mind. 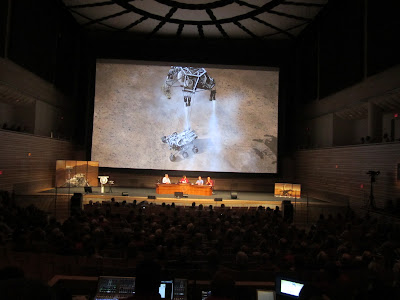 Heading by the bookstore on the way through campus - I've been wanting a picture of this shirt since seeing it at one of the Big Red Freakouts: 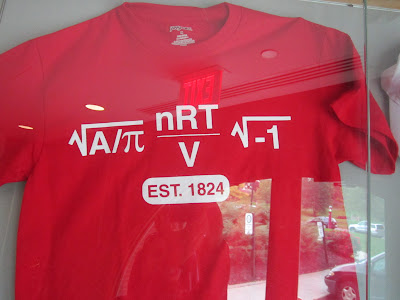 The rest of the day on Saturday was dedicated to food - Troy Farmers Market, Trader Joe's, and a pre-marathon Italian dinner  :)

On Sunday we ran the Mohawk-Hudson River Marathon from Schenectady to Albany.  It was the most beautiful day to run 26.2 miles - nice and chilly, overcast but no rain even though we expected to get wet by the end.  Plenty of water stops and a bunch of cheering sections.  The course runs slightly uphill to reach the bike trail along the Mohawk, then many miles of bike path under beautiful foliage and along the pretty river.  Mostly downhill with a couple of long, gentle uphill grades that were hardly noticeable.

Miles 18 to ~22 were on the streets of Watervliet and the only time we had to deal with traffic, at least it was short.  And we finished with 4 miles on the bike path along the Hudson River, a trail we know well from winter training runs back and forth between Albany and Troy.

John ran a very smart race.  He knew exactly what pace he needed for a 3:25 finish which would give him a Boston qualifying time.  He started out just slightly slower, then monitored the pace group and ran with a couple of Canadians who were also shooting for similar finish times.  He said it felt easy for many miles, then his legs hurt a bit and it was work to maintain the pace.  No issues though, and he still ran strong to the end to finish in 3:23:54!  Congratulations John!

I had a marvelous day, basically "running for training" and looking for consistent mile splits.  The weather helped a lot, no sweating or heat management yesterday.  My legs did great and I was never breathing hard.  I've been reading Scott Jurek's book called "Eat and Run" and it has given me a few tips to work on.  At the end I was still feeling good, mostly trying to find John to see how he did.

Big hugs!!  Then he told me that he heard the Chicago Marathon was also yesterday, so we hustled home to try to get his Boston entry in as soon as we could since the entry process is still open but there is no telling when it will hit the max limit.  There is still a chance he might get in the 2013 race... we shall see.

It was an excellent marathon course, by the way - I highly recommend it.