Normally about this time I'd be compiling photos and stories from a weekend of urban racing in Las Vegas.  This year - something completely different.  Not an adventure I would have chosen for us, but I guess it's still semi-interesting enough to report on.  I wasn't really inclined to write about this right after it happened, but there have been enough good things that it shouldn't be too much of a downer.  If you're overly squeamish you might not want to look too closely at the photos.

Recently there was Daylight Savings Time.  I've been riding my bike to work and back most every day, and I did remember to bring a bike light for the first ride home in the dark.  I didn't remember to check that it had any charge in the battery.  No charge.  Ah well, there were streetlights over the sidewalks, I turned on my red blinkie on the back so cars would see me from behind, and I figured I knew the bike trail well enough to ride that ~mile or so section in the dark.

Just cruising along, I was coming down a small hill with enough ambient light to see the bike path.  And there is never anyone out there.  "Never" is a strong word, OK, there is very rarely anyone out there.  So it was a huge surprise when a black and white dog dashed in front of my wheel.  Somewhere between braking and veering, I ended up on the ground and immediately knew that something wasn't right.

The dog's owner came over to apologize profusely and see if I was OK.  I was also apologizing for being an idiot and riding without a light, and I was hoping the dog wasn't hurt - he looked fine at least.  The guy found the bike lock that had come out of my backpack and told me my nose was bleeding.  Most of me felt fine, my legs and arms still worked great.  But my head seemed out of whack and my jaw didn't fit together like normal.

I walked the bike for a bit and then rode the rest of the way home, called John, and looked up the nearest urgent care place.  John was home quickly and drove me to urgent care.  They took one look at my face and pretty quickly assessed that we should head for Albany Medical since it was a head wound.  The bump on my head turned into a big knot and they rightly told us to get that checked out somewhere with additional diagnostic equipment.

So we drove downtown to the ER and checked in.  I had been alert and moving on adrenaline up to that point, but after getting onto a cot I kind of faded into more of a state of shock.  I don't remember everything from the next several hours, just getting questions that I had trouble answering.  "On a scale of 1 to 10, with 10 being the worst pain you have felt in your whole life, how much does it hurt?"  Well, it doesn't really hurt but my jaw doesn't fit together right.  "Who is the president?"  Um, today is the election and I have no idea who is winning, although yes I know technically that wouldn't change the answer but it still confuses me.  "What year is it"  OK, that one I do know I just couldn't get my mouth to form the words.  So maybe I am a bit discombobulated.  John stayed with me and it was a comfort to know he was there amid my brain fog.

They sent me for a CT scan of my head and came back with the good news that my brain was fine.  Yay!  So what about my jaw?  Hmm, they did an examination and decided another CT scan was in order to figure that out.  We waited a while and John and I eventually dozed off.  After they woke us up to take me for the 2nd scan I felt a lot more "with it" and alert.  The 2nd scan showed some broken bones, I found out eventually one on either side of my jaw and one near each eye.

I got one stitch in my chin - the first stitch in my life.  I asked for a second one, because who gets "a stitch" instead of stitches?  But he wouldn't do it.  Then they sent us home and I slept solid for what remained of the night. 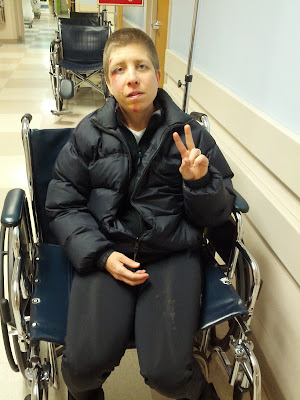 We were supposed to fly to Las Vegas for the Great Urban Race championships the next weekend, and I thought I might still be able to go.  Then my teeth started causing pain and I started questioning the wisdom of dealing with the stress of travel when we couldn't actually race.  Painkillers helped my teeth, I slept a lot, and the swelling around my eyes eventually came down.  There are still some interesting colors in my face, but surprisingly little pain once my teeth stopped hurting.  We stayed home and supported our friends with online clue solving.  And Kip and Dave won!  Congratulations!!  I slept a lot more on Sunday.

The photo I posted to Facebook - people said I looked tough, he he: 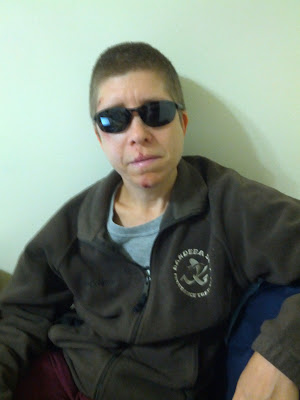 I don't generally write much about food even though it is one of my favorite things in life.  Well, y'all are just going to have to get used to it for a little while because I'm splurging a bit on the food talk.  I can't chew and won't be able to for a few weeks, so we have been playing with the liquid diet thing.  My task is to get enough good stuff in to fuel my recovery. 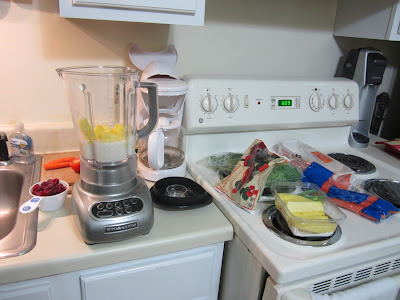 I've been adding a scoop of whey protein powder and 1/2 cup of dry oatmeal flakes, also ignoring the ice.  The "liquefy" setting on the blender does a marvelous job of making the oatmeal completely easy to swallow without chewing, I don't even know it's there.  So that's at least some oats for the day. 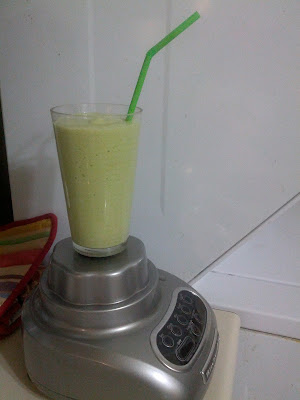 Last night I cooked up some red lentils from Trader Joe's with vegetable broth and parsley, then blended my serving.  Wow, that was particularly awesome!  Tonight was homemade vegetable/bean soup, also delicious.

I've been drinking a full serving of Spiz every day to be sure to get some of everything.  Also enjoying some pureed soups from Trader Joe's and some natural apple sauce.  At this point I can drink through a straw or a cup and eat with a spoon as long as it doesn't involve chewing.  So that's a luxury that I have appreciated because on Friday I go in for surgery to finally repair my jaw.  After that my teeth will be wired shut for 3-4 weeks.  No more spoon for a while.  I wonder if I will miss licking things like the rubber scraper when cleaning out the blender.

I expect another period of recovery, with any luck it will go as well as the last 8 days because I feel great right now.  I don't expect quite that level of ease, but at least I have a wonderful caretaker of a husband and a good start on some recipes that I'm excited to have discovered.  Learning how to eat through my teeth should be interesting - I wonder how messy that could get.

The initial goal is to figure out the basics.  Then go from there.  If you're interested, I'll post again the next time I'm up to it and let everyone know some of the details.

In the meantime, a couple things from John that make me giggle:

(Raccoon face, in case it's not obvious) 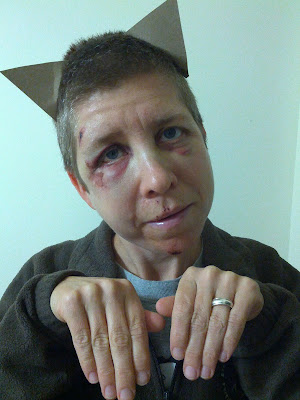 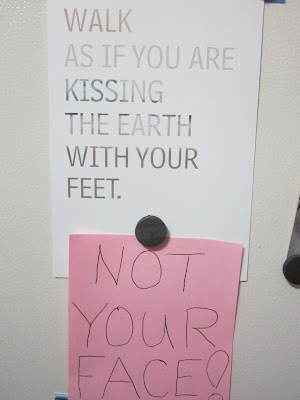 holy tomato sauce you have such a great outlook on this accident..worrying about the puppy : )I am so glad you are ok and sending you positive thoughts towards being able to eat something really really chewy soon : )
hugs