Surgery and the start of recovery

Well, I can't speak very well so I'm happy to have a blog where I can express myself occasionally, just a little.  I suppose this blog has always been self-indulgent, so although the subject has turned into "me" instead of "what we are doing/seeing", that's not a huge departure from the norm.  It does take some getting used to on my part.

So anyway, it has been a week since my jaw surgery.  The surgery itself went fine and the people at Albany Medical were so great, all highly professional and helpful and caring.  The experience was as good as it could have been, seeing that it was a hospital and surgery and all that.

All dressed up and ready to go: 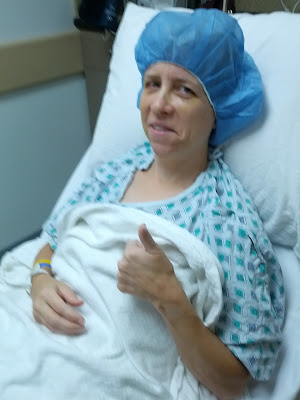 The anesthesiologist spent a lot of time with us beforehand, explaining everything and answering questions.  I believe his accent is British (although I've been wrong about accents many times) so that was a bonus.  They had to use a nasal breathing tube so apparently they brought in an "airway specialist".  I didn't notice any aftereffects from that, so he must have done a great job.

Surgery itself lasted a couple hours and I obviously remember nothing between being wheeled into the OR and waking up after it was over.  The oddest part was the initial moments upon reawakening - my brain went into fast-forward and for a few minutes everything happened at high-speed like a movie sequence that took only a couple seconds.  Weird!  Must have had something to do with coming out of anesthesia.  I think I went back to sleep after that for a while.

I could breathe out of one nostril just fine, but until I was able to also clear the mucus from my mouth to give myself an alternate breathing path I was a bit on edge.  I have no confidence in my sinuses in terms of staying open enough for me to take in air.  The nurse stayed with me as they brought me from the initial recovery area up to my room, and eventually I got a sip of water and was able to sit up and breathe more easily.  They brought John in and everything started getting better from there. 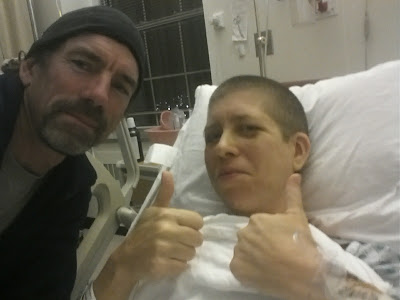 When I started "CTFD" training a couple months ago, I could hardly have imagined I would be using it for this...

I could barely speak, so the nurse found me a clipboard and pen (yes, I had brought one myself, I'm sure some of you won't be surprised at that, but John wasn't there with my Bag-o-Stuff yet).  It brought to mind this episode of Buffy:
http://www.youtube.com/watch?v=76OavySF4L8

I started writing notes to John like crazy.  Page 2 starts with "We may need more paper"

The pain level was pretty low, and continued to be manageable with basic meds for the next few days.  They had done some exploratory checks around my eye sockets but determined that the damage there was less than expected so they didn't need to repair anything.  Excellent, I was hoping that area could heal on its own.

Obviously they put my jaw back in place and then wired it shut with arch bars and wires.  The left side hinge feels normal again (as opposed to bound up after the accident), at least as far as I can tell without actually moving it.

What's frustrating me are the 2 wires across the roof of my mouth, from just above my teeth from left to right.  I can only guess that they are there as stabilizers in the left-right direction, but not only did I have no idea they would be put there, I can't find anything online that describes where anyone else has had the same thing.  If I could move my tongue inside my mouth with free rein (come to think of it, I do feel like a horse with a bridle on), I believe I could talk and eat closer to normal.  As it is, I have spent the past week relearning how to swallow and speak without causing the wires to cut into my tongue.  So that's the weird part of this experience so far.

My "clear liquid diet" started that evening with some apple juice, chicken broth, and tea.  John took care of the jello and orange sherbet for me.  He commented that he would not have imagined that there could be any human condition that precluded eating jello, but that's apparently not true.

It took me a couple hours to get through my first "meal", almost finishing in time for the second one to arrive.  That one went a little faster.  I finally realized the tea had caffeine in it and asked for decaf the next morning.  Not sure why they are serving caffeine to post-surgery patients, but what do I know?  I didn't sleep much that night, maybe related to the tea or simply figuring out how to breathe and relax enough to be able to doze off. 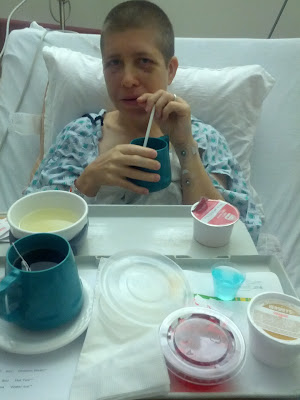 They let John stay overnight with me (yay!) and he sacked out in the big reclining chair.  It was great having his help to get to the bathroom (instead of having to call for someone to come in), between unhooking my calf squeezy machine and rolling the IV stand along with me.  They were getting plenty of fluids into me and my bladder was working just fine.

I must have been doing OK because they released me to go home the next morning.  Besides feeling weak and dizzy for a couple days if I tried to walk much, my recovery from surgery went well.  Lots of sitting and sleeping (a lot!) and taking it easy. 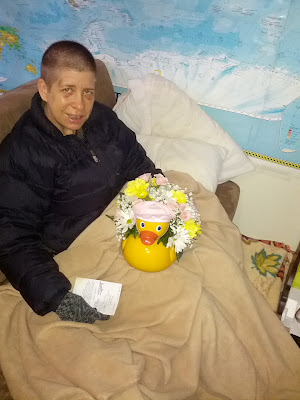 The past week has involved slow improvements.  I've been outside walking every day, a little longer each time.  Today I actually felt like I was walking with purpose instead of just ambling.  I even broke out into a short (very short!  like "Eco-Challenge Borneo" short) run because I felt like it.  It will take time to get back into shape after this, I can only be thankful I was in good shape to begin with.

The 48-hour post-surgery clear liquid diet kind of sucked.  There's only so much you can do with that, and it mostly involves sugar and salt as the main ingredients.  John picked up some natural ginger ale from the co-op and that was the highlight.  I was so happy to move on to soups, smoothies, Spiz, and apple cider starting on Sunday.

During the 9 days between the accident and surgery I didn't lose a single pound even though I was on a liquid diet the whole time.  Since the surgery I've dropped about 3-4 pounds but I've been working hard to keep from losing any more.  It's not easy - it takes a lot longer to suck down a smoothie through the wires, so John has to help finish each of them and I'm not going through them at anywhere near the speed I was before.

Last night I got tired of raspberry seeds getting stuck in the straw, so I said "what the heck" and started drinking right from the cup.  Hey, I can drink from a cup now!  The seeds got stuck in the wires instead, but cleaning them out was worth it.  Also - chai latte tea from Trader Joe's, not through a straw anymore thank you!

My latest trick - I just downed an Ensure directly from the bottle.  Progress in strange places.

Thanksgiving was a "chill" affair this year.  We drove up to Thacher State Park to enjoy some sunshine, an overlook down toward Albany, a bit of trail running for John, a nice walk for me, and some driving just to get out and see something different.  Very pleasant.

I'm thankful for:
- Facebook for helping me stay in touch with so many people.  I have not felt alone this week, and as long as I have internet access, I don't think I ever will  :)
- Everyone who has sent good wishes, cards, gifts, loving and caring thoughts.  It means so much and makes me smile.
- Spiz for something I can easily drink and know that I'm getting at least one serving of all the basic areas of nutrition even when the rest of my diet is rather lopsided.
- Trader Joe's for pureed soups and chai latte
- Our new blender!
- Wait Wait Don't Tell Me and Car Talk for making me laugh on my walks
- Survivor, Dancing with the Stars, and Glee for being such excellent seasons this fall and keeping me entertained
- Games Magazine for mental challenges and shared enjoyment with John
- The birds and squirrel outside my window - yes, it's all about keeping me entertained lately!
- Having a work laptop that I can bring home so I can attempt to keep up and not have to take a buttload of vacation days that I don't have
- I'm thankful that this wasn't any worse... I'm currently at "OK" but haven't hit "bad" at any point so far and things are getting better all the time.  Also the timing - could have been much worse.
- Last and most - my loving husband John, who knows how to take care of me, look at me without seeing the strangeness that is my current face/mouth, make me laugh, be there when I need it most, and make me happy.  I am one lucky gal.