Our third (and last planned) year running the GUR race in Boston - always a fun time!  This year the race started downtown, so when we decided to begin with a checkpoint in the Back Bay it was time to jump on the Green line.

We hopped off at Copley Square and bought some baby shampoo at a CVS before running to the charity drop-off for Room to Grow: 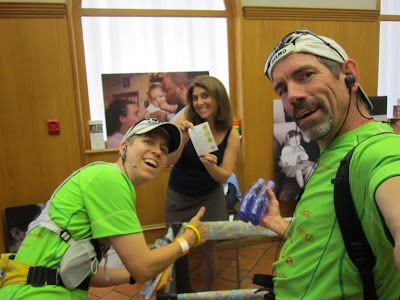 While trying to find an Arlington T stop that didn't say "Exit Only", we spotted a Duck bus speeding along the next block, but we weren't fast enough with the camera to catch it on film: 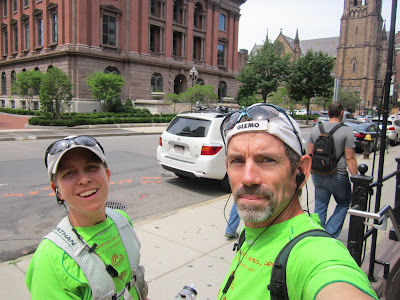 One block away we were successful in getting underground, PLUS we found a willing participant in the "get a hug from a man with a beard" tic-tac-toe square: 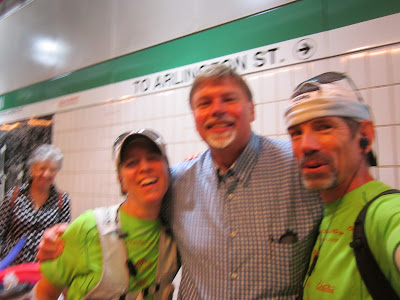 Back on the street near Fenway, the easiest tic-tac-toe square ever - not just 2 but 4 people (out of many) with Red Sox garb - thanks guys!  At least we didn't have to find someone wearing red socks this year... 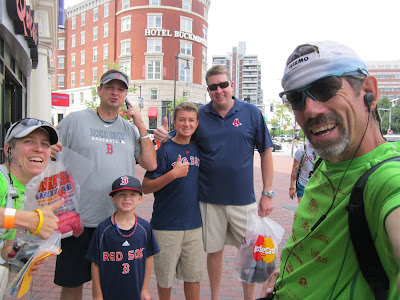 We did a ping-pong/cup challenge at the Boston Beer Works: 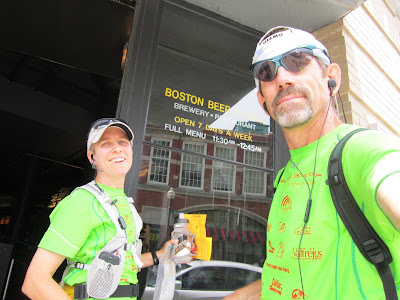 And another checkpoint down the street at an ice cream place: 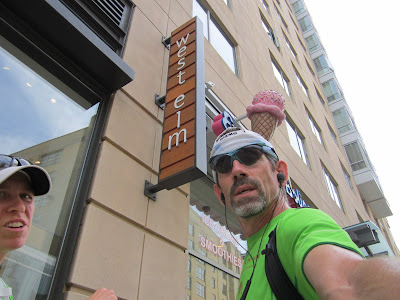 From there we ran toward Massachusetts Avenue, around Fenway Park (cool!) and on little streets while Sheila tried to help us muddle our way up a side alley, over the interstate, across a big street with no street signs, and eventually toward a sign pointing to "Mass Ave".  I recognized part of the Boston Marathon course, I'm pretty sure.  Then we were on Mass Ave and there was a bus!  Somehow, through all the perplexion, we took a dang direct route and managed to catch a bus at exactly the right time.

The bus driver lady was totally into helping us, wanting to solve clues and pointing out the right stop to get off for our next checkpoint (which luckily was in Cambridge and not back in Boston south of the river - that was not obvious from the clue).  We ran downstairs at a boxing gym, did a challenging workout, and got our picture with a belt buckle even larger than the ones they give out for 100-mile races: 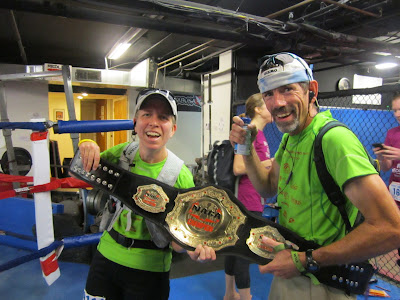 Around the corner to an improv place where a guy was trying to wrangle a bunch of teams into telling jokes.  He managed the crowd well, and we ended up with our fliers and a blurry picture: 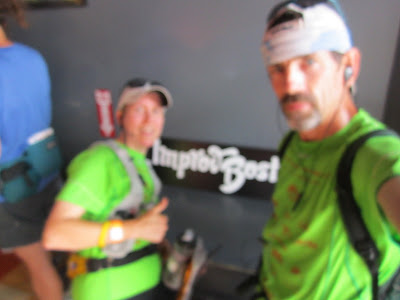 We ran east over to The Garment District to do a little shopping - John, how would these look on me? 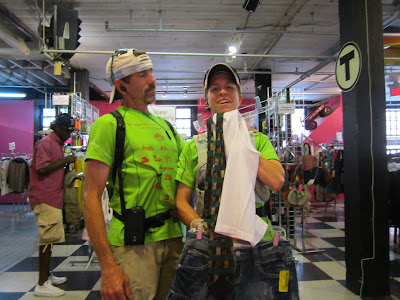 And around the corner to a pool hall where John sunk 3 balls on the first try - good one! 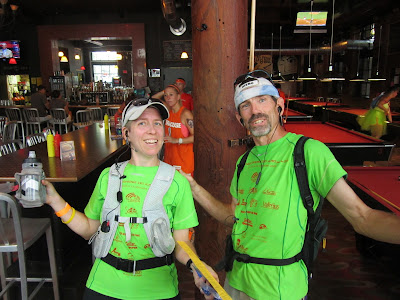 More running - up to Cambridge St to get a couple tattoos: 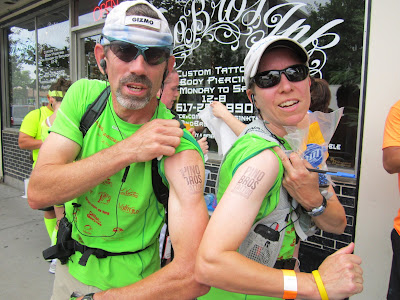 There was quite a bit of running in this one but we seemed to be moving pretty well.  One more location in Cambridge, the School of Groove.  We walked in to find a family up on stage about to sing a "Boston classic often sung at Fenway Park".  John had guessed "Take Me Out to the Ballgame", but no!  When the piano player (a talented race volunteer who must work there) started in with the tune to "Sweet Caroline", I was so excited.  I think I'm still a bit emotional about this city since April.

When they were done we jumped on stage and took our turn blasting out the lyrics in a very off-key fashion (my sincerest apologies to Sheila who had to hear this on the other end of the line). 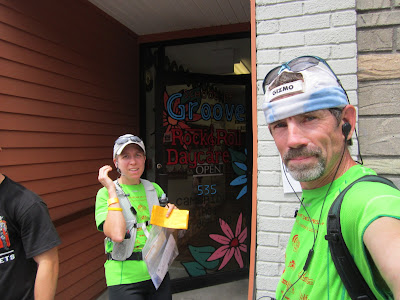 We debated getting on the Green line from there but decided to run it in.  Great decision, because we finally found our elusive Duck tour vehicles lined up at the Museum of Science: 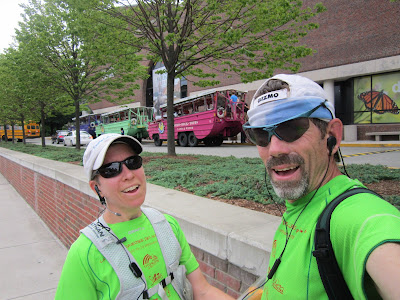 One more checkpoint to go!  We found West End Johnnie's one block from the finish line, declined an offer for a free drink, and played a Plinko-type game for our final race photo: 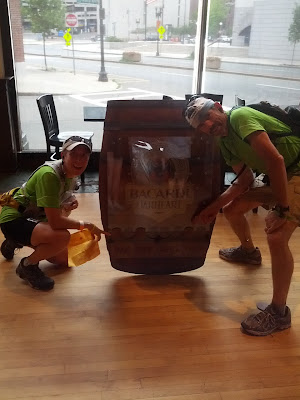 The finish line was so calm that we were sure at least one other team was already in, but no!  We were the first ones there, our photos were good, and we finally won an urban race in the city of Boston!  Sweet (Caroline)! 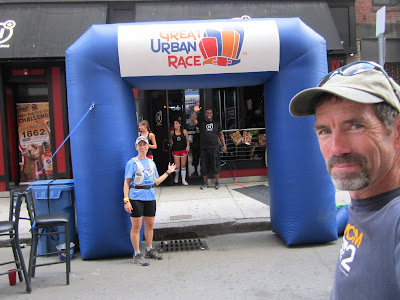 My biggest take-away impression was that everyone in the city was so super nice.  The folks at all the checkpoints, random strangers, the bus driver, especially the other GUR racing teams.  I feel a real affinity with this place. 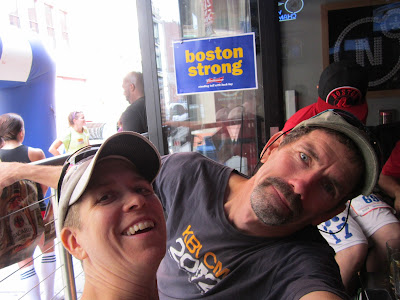 To top off a mahvelous day, we returned to the Back Bay and walked down Boylston Street from Hereford to Copley Square.  Marathon Sports is open again and appears to be doing well: 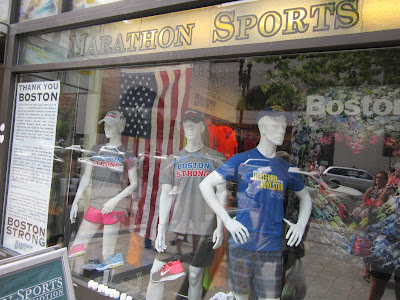 And we finally crossed the Boston Marathon finish line - a personal worst marathon time (almost 4 months) but at least we finished it! 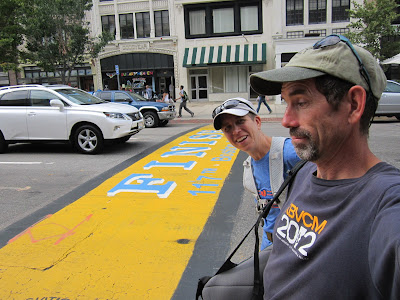 You don't know me, but I know you from GUR Austin every year. Our team finally registered for Nationals this year and saw you guys down here in San Juan, but didn't remember seeing you at Austin this year. Google searching got me here and I read not only about your GUR Boston race but your experience at the Boston Marathon. It was great getting to read about your race and having the photos to get a feel for all of the fun along the course. I'm very glad you guys stopped for that photo at the 25.2 marker! I heard the usual Austinites finished 1-2-3 at the Elite Eight, so congrats on that! We'll be sure to come introduce ourselves if you run Austin again in February.