We went to New York for a long, fun-filled weekend, including our first go at the new Xplore urban race series.  It was the second Xplore race ever, so we weren't sure what to expect, but it turned out to be entertaining, just challenging enough, and an excellent tour of the city.

They allow solo racers (very few urban races do), so we figured we should try running solo just to get a feel for it and to give John a break from my direction-giving for a couple hours.  Then last week my knee started aching at annoying times like going up and down stairs, possibly from being tweaked during the Boston boxing workout.  Highly fortuitous that John would not have to wait while I carefully walked around the streets of New York.

We decided to start with the checkpoint in Bryant Park, having solved the pre-race hints and knowing the location of CP5.  Plus it was only several blocks away, so we started off north along 6th Avenue.  One of the race guys followed us with a GoPro camera strapped to his chest, so it's possible our traffic/pedestrian-dodging antics will make it on film somewhere.  Ah yes, the joys of trying to run through NYC crowds!

At the park we paid $2 each and joined some children on the carousel, taking videos of each other as the ride started, the horses moved up and down, Flaubert Frog next door told funny stories, and children all around made noises like they were having a great day in the park on a Saturday afternoon.  If we hadn't been so focused on getting the 30-second videos correct before the music and the ride stopped, we might have felt conspicuously out of place...

Next we went west toward Times Square.  I noticed that my knee was feeling OK, that was a nice surprise.  I still couldn't keep up with John on the street but I managed to keep him in sight for one block.  We found some cartoon characters on a less-crowded-than-normal corner and set up our "X-pose" photos with a happy (or at least he looks that way?) Mickey Mouse in exchange for a couple bucks: 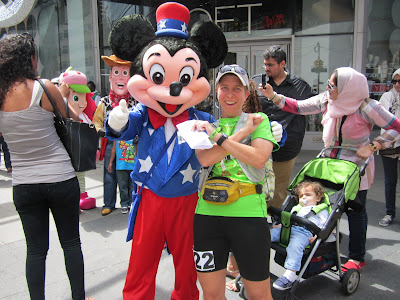 And a bit of an Elmo photo bomb to boot: 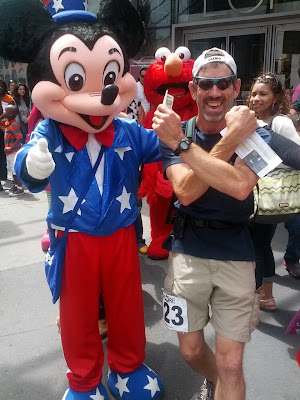 A short ways from there John almost lost me in the huge crowd but I caught back up as we waited in front of the M&M store for one of the female characters to FINALLY show up on screen - that took a bit of patience, good for resting up for the next dash... 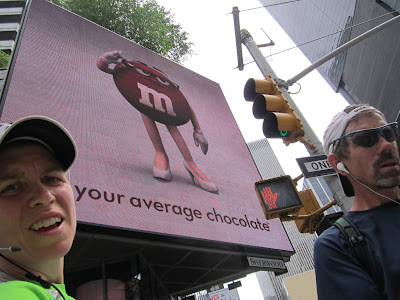 ...around the corner to the Ambassador Theater: 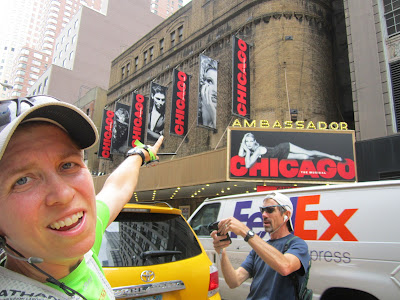 John had some freedom to play around with his photos: 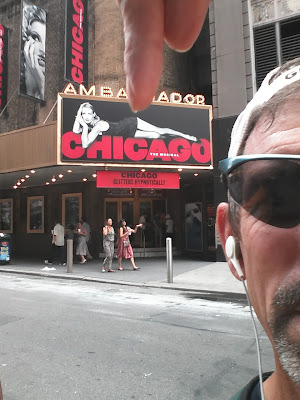 Now for a quick subway ride up to the west side of Central Park and a mosaic in Strawberry Fields that we had not seen before - very nice! 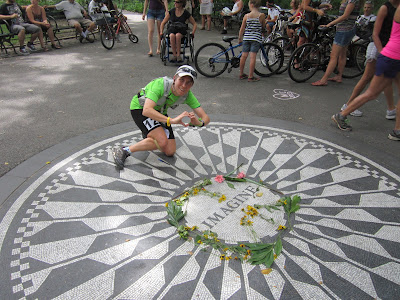 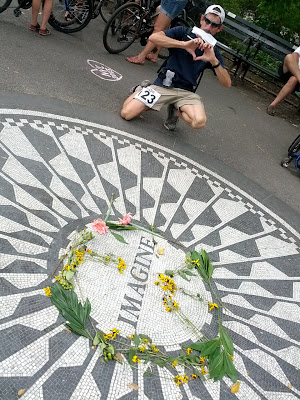 Kip mentioned as I was starting east that we would be running near a lake and if I happened to see a boat on the water I should get a photo for CP9.  Good call! 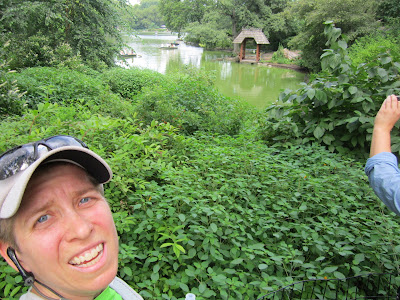 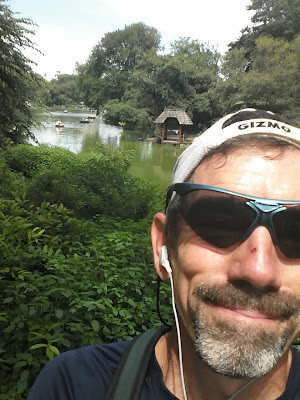 I continued east, slightly north, then slightly south to get around the edge of the water and over to the boat house where Kip could get a precise read on my location.  John saw me go northeast and decided I didn't know what I was doing, so he took off southeast.  That's when I lost him, or I guess more accurately, he lost me...

I cruised past a small wedding party by the boat house, complete with live music, and I briefly considered getting my "street musician" checkpoint out of the way there but decided that would be WAY unclassy.

Over to the next little pond and Alice in Wonderland!  We love this statue and the quotes around it.  Kids love to climb on it.  A woman was happy to take my photo here now that John had gone and left me: 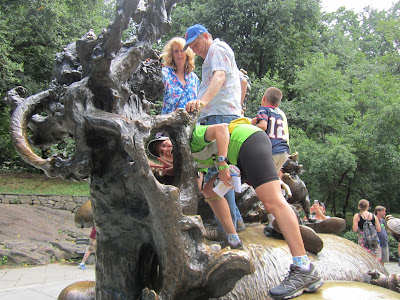 A short while later John got himself reoriented, getting his own photo at the back of Alice: 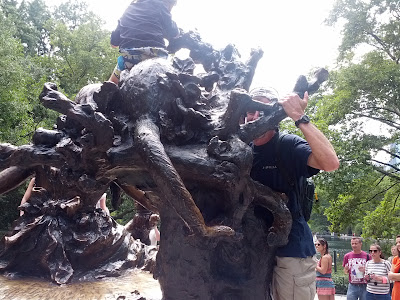 Time for a long subway ride south!  Kip helped me get to the green line on Lexington, and it wasn't until I was almost there that I remembered that all green-line trains were running local (vs. express) that weekend.  This meant that I couldn't switch to an express train to skip a few stops on the way down, although I still might not have done that anyway.  A train showed up right away and I got on to mull over the transit options.

Not finding any great alternatives, I settled in for the ride.  It was really strange being on a subway in the middle of a race all by myself.  I took a deep breath to try to relax.  Read through the remaining checkpoints.  Deep breath.  Reviewed the photos on my camera.  Closed my eyes for a second.  Rechecked the map.  Imagined where I might be going from here.

I looked up to see that we were pulling into Grand Central.  Not even past the start/finish yet!  Holy cannoli, this was another patience test.  Usually I can start a running chatter of commentary in John's direction when I'm nervously sitting on public transportation trying to hope for the best, not this time.

Half an hour after leaving Alice I was running down Mercer Street to these stairs where Billy Joel himself sat for the album cover of Innocent Man.  I was psyched to be here!  I had already decided that if this needed to be my skip point, I was coming back here after the race to see it.  Could not pass this one up - very cool indeed: 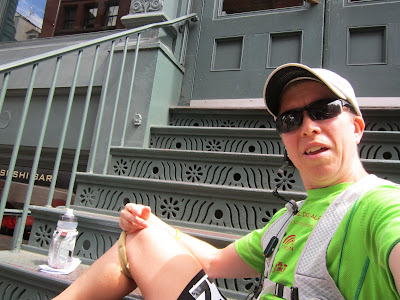 Dressed a bit differently and with a little more hair than me: 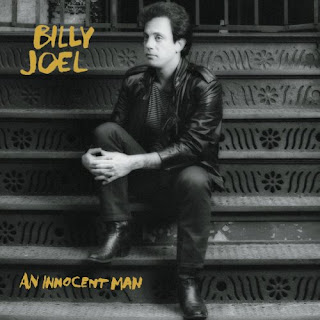 After that excitement, it was time to run to Washington Square Park and get a little wet.  I took off all my electronics and briefly considered taking off my shoes, but as John rightfully pointed out afterward, I would have had my adventure racing license revoked if I had.

A nice woman took this video of me touching the base at the center of the fountain:
http://www.youtube.com/watch?v=m0b6IIf45WQ&feature=youtu.be

Kip had told me to be on the lookout for a single pigeon and a street musician.  At one corner of Washington Square I found a jazz band that didn't seem to mind my silly attempt to dance along in exchange for a couple dollars.  I will spare myself the embarrassment of uploading that one to YouTube.

However, there were no pigeons to be seen.  Maybe something to do with the "Do Not Feed the Pigeons!" signs all over the park?

I ran a few blocks up to the next park - Union Square.  I decided to take a chance and detour into the park proper past all the market stalls, and I spotted pigeons!  Except there were 3 of them!  And they were in a fenced-off grassy area so I couldn't play sheepdog and try to isolate one.

So I commenced working on one of the strangest selfies I have tried to date - using a big bush to cover up two pigeons while leaving a single one in view.  But they kept walking around, in the wrong directions, dang it birds, work with me!

Here is the best one of that scenario, complete with a look of perplexity on my part: 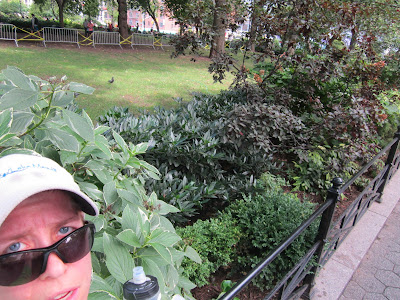 On my way back to the street I rounded the corner to discover two pigeons happily pecking away at crumbs on the sidewalk.  This shot was WAY easier - thank you dude! 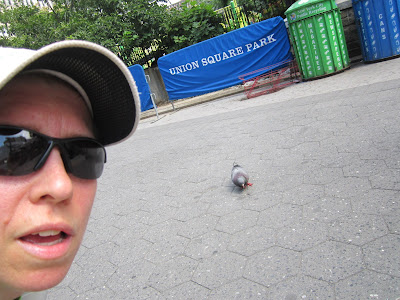 One more park - Madison Square, where I had to convince a couple strangers to help me with poses in front of the art installation.  Not just one picture, but three with the same person, in different corners of the park that required walking together in between them.  Hmm, this CP was by far the least exciting to me.  John skipped it in favor of running over to the High Line, that's how much he didn't want to have to bother other people about it.

I got lucky and found a couple willing ladies, at least the one in the photo was happy to help.  Turns out they work for the park, which I thought was pretty funny.  They must see all kinds of things (and people) during their days at work. 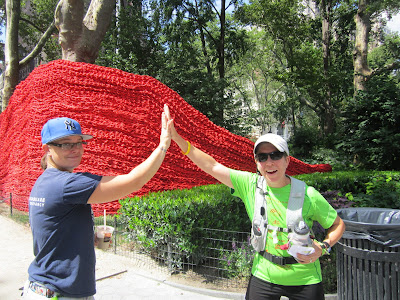 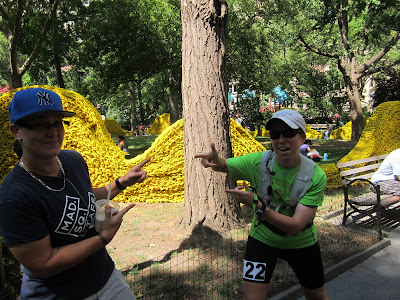 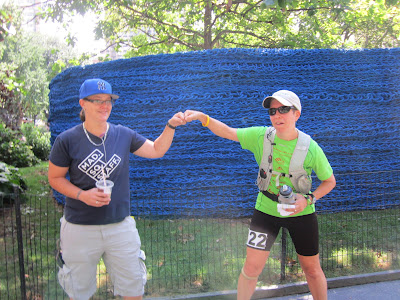 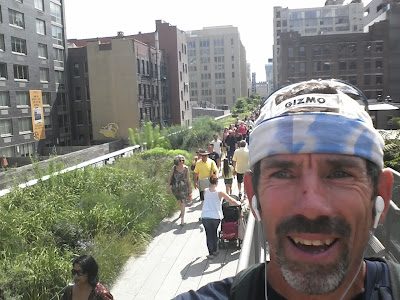 I decided to try the subway to get back even though I was only about 10 blocks from the finish line.  That would have worked great - IF I had caught the train that was closing its doors as I ran down the stairs.  Instead I waited on the next one, including a delay after I got on, argh!  Yep, shoulda ran it back.

More patience - only one stop this time - I hoofed it up the stairs and down 35th Street to the finish line - first one there, really?!

Then the race directors asked the question I have heard so many times (in different languages even) - "Where's John?" - I answered that I honestly didn't know.  Happily, a few minutes later he came running down the street.  All of our photos were good so we captured 1st and 2nd place. 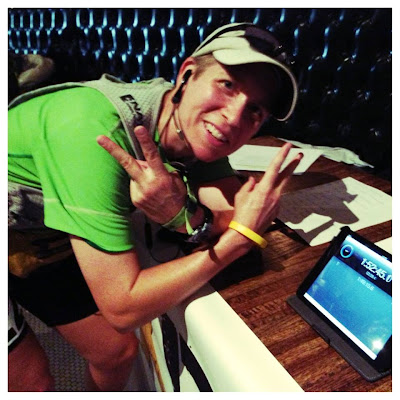 Zack Attack rounded out the podium in third, so they are now on top of the Xplore leaderboard - nice job! 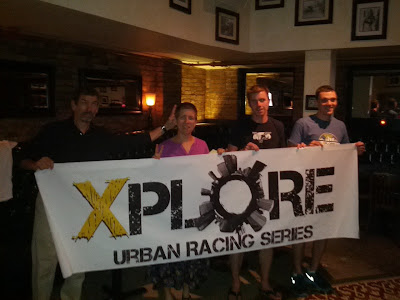 It was a super fun race and we look forward to the chance to Xplore another city in future.  Thank you Logan and Jonathan and crew!