We had so much fun with the Xplore race in New York that we kinda couldn't help ourselves in trying another one.  There is also an "I love Boston" factor about it all.  And it meshed well with a race we were going to on Sunday in New Hampshire.  Let's do it!

John and I raced solo again, hanging together at the beginning until we found a reason to forge ahead separately.  We initially fumbled just slightly, as we were hoping to catch a northbound bus, but the race started a few minutes late and there was no bus to be found around the corner.  We decided to head for the North End on foot.

Back the other way, over to the Greenway... there was team Zack Attack.  They were taking their picture at a road tunnel for CP12, and we thought this was a great idea so we followed suit: 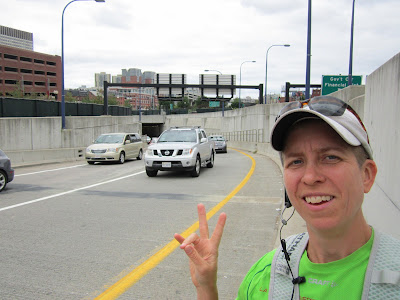 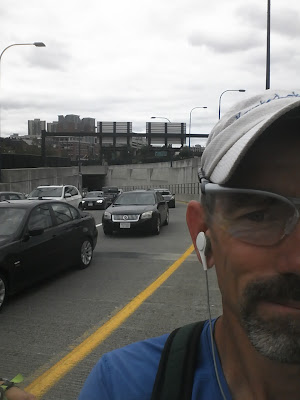 My phone contact Dave directed us over to the Quincy Market to take a video of ourselves galloping around the plaza shouting "the British are coming...the British are coming!" for 15 seconds.  Slightly embarrassing, but at least it was quick and easy.  I got a few looks as I ran around and made a spectacle of myself.  John declined to do this checkpoint.  Are you sure, John?  He was sure.

Time to run to the north end of the North End.  John ran ahead and we soon found the plaque for the Boston Molasses Flood next to a park: 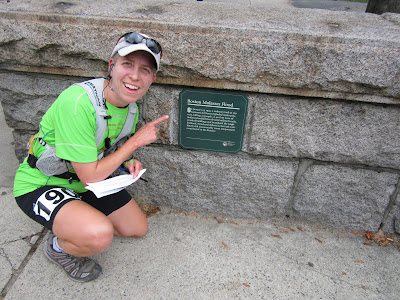 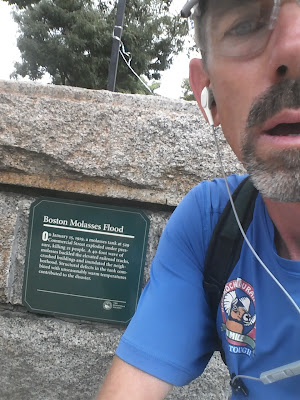 We noticed Zack Attack leaving the park, which was again helpful as it highlighted the swingset in the back for our CP9 photos of us jumping off a swing: 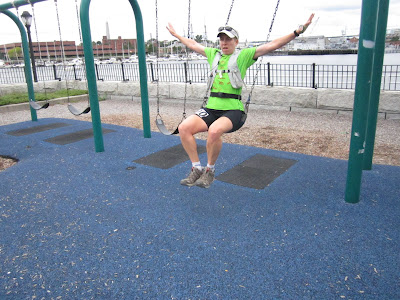 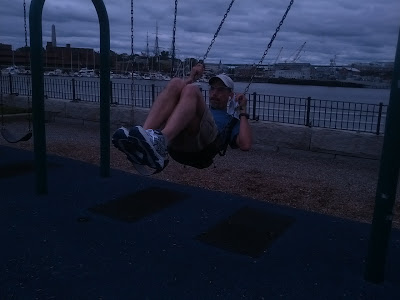 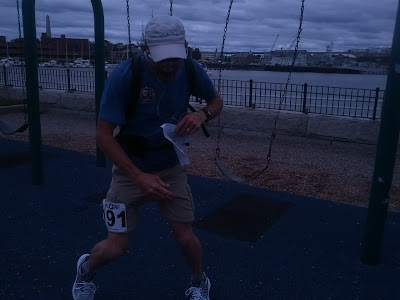 Then a quick jog down a couple streets to find a couple green doors at the front of the place where Rose Kennedy lived - we always learn a little more history at the Xplore races: 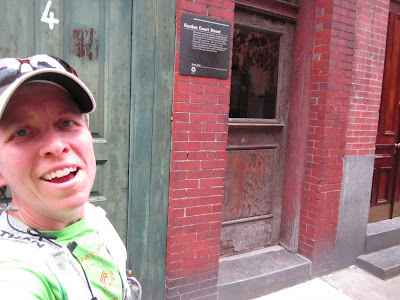 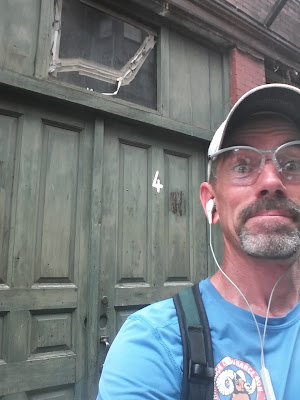 Now we needed to split up, as I was skipping the Science Museum checkpoint but John needed to go meet with T-Rex since he skipped the Quincy Market video.

Dave guided me back down to the Greenway and the Rings fountain for a video.  As I was putting down my water bottle, I noticed an armband on the ground that looked familiar.  Hey, I think that belongs to one of the Zack Attack guys.  I picked it up, and it had a phone in it!

I scanned all around, no sign of the team.  Hmm... well, I couldn't leave it there sitting on the ground, so I put it in my waistbelt to bring to the finish line.  Not sure what else to do.

So the checkpoint - I had to take a video of myself touching 25 different light fixtures.  The trick was that the lights were embedded in bricks in the ground, and they were alternated with water jets that started and stopped in various patterns.  I managed to touch 25 of them without getting wet, but it was close!

Now up to the Granary Burying Ground for photos with the graves of 2 signers of the Declaration of Independence (out of 3 who are buried there).  On the way, Dave and I had this conversation:

I didn't find Paine's gravestone but did get photos with the other two.  Thanks anyway, Dave! 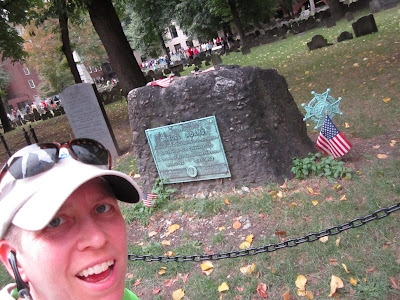 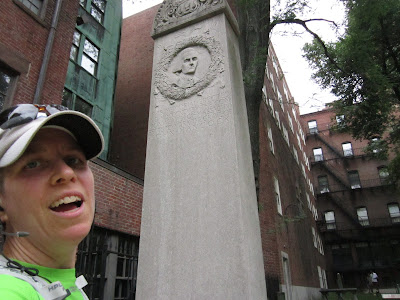 Dave did a super job guiding me across the large Boston Common park, at angles past a bandstand, near a Reggae festival, through the crowds, across the pond, and over to a large statue of George Washington.  I coaxed a group of tourists into taking a picture of me with two of them posing in front of it.  Thanks y'all! 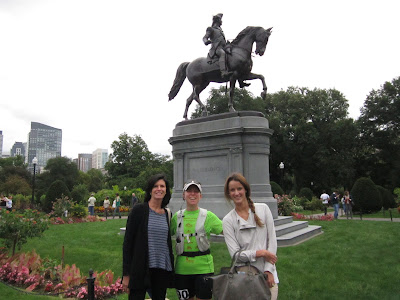 Dave told me it was a bit of distance to the next CP - at Fenway Park!  Sweet!  I ran to the nearby T station, waited a few minutes (longer than normal for the Green line), and eventually got on for a few stops to Kenmore.  I had time to figure out the details for the 3 checkpoints in this area, and you would have thought that would not be too much to remember.

My phone didn't regain "reception consciousness" for several minutes after getting back above ground, but luckily we had been in this area in a previous race and I was a little bit familiar with Fenway.  I started running around it on the north side, looking for a banner with digits that add up to 23.  Or any banner, I wasn't seeing anything.  But it was great fun listening to the announcer over the loudspeaker, as the Red Sox were playing the Yankees in Fenway at that very moment - someday I'll actually get back inside this historic venue!

Finally I got back in touch with Dave and soon after that I spotted a couple banners from 1903 and 1904.  Dave told me I needed 1967...  there was an entrance at the corner but I would need a ticket to get in.  I peaked inside and saw more banners.  The one for 1967 was just visible, sweet!

Another team was there, and we took each other's photo.  It's the blue banner on the left. 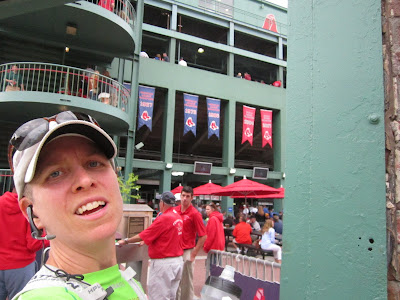 Apparently there is another set of banners on another outside wall of the park, which is where John took his picture.  I lucked into the one that was closer to the next CP, the victory garden and memorial stone in the Back Bay Fens: 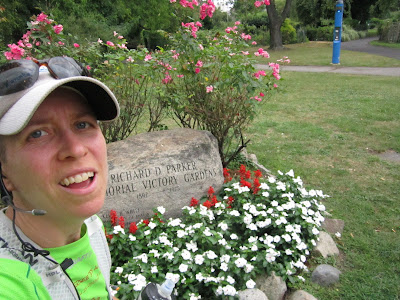 Dave did another nice job of remote navigation through a park, and I popped out at the back of the Museum of Fine Arts.  He said I was looking for "baby heads" although he wasn't sure what that meant.  When I saw these giant heads, it was so strange and obvious that I had to laugh: 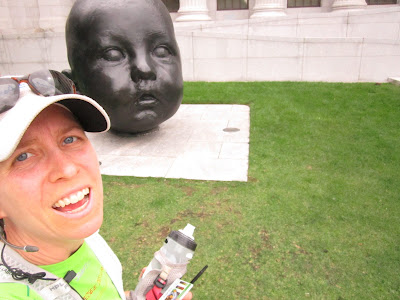 More giggling, as we were discussing the need for a tea bag, and apparently Dave's wife cracked up every time he said something like "you still need to get a tea bag", making him laugh, which also made me laugh.  CP4 was a tea bag-related video, no, a real tea bag, and we had thought about buying them at Starbucks early in the race but there was a long line and we didn't want to wait.

Also confusing was that Dave told me to find "the T" and we were trying to differentiate that from "the tea bags"...

I saw a T car waiting at the Northeastern University stop, so I made a run for it and made it.  Yay!  It sat there a few minutes before starting up, but at least I didn't have to wait nearly as long as John had for his rides on the subway.

On the way back toward the finish line, I discovered that the Quincy Market video was nowhere to be found on my camera.  What the heck?  Not sure how that happened.  At least it was close to the finish line, it would just take a couple extra minutes to redo.

Then I doublechecked the rest of the pictures and suddenly realized I didn't have an "X" pose with the banner at Fenway Park.  D'oh!!  It was clearly a photo requirement, and I clearly did not want to reverse steps at this point.

What to do?  I had previously skipped the T-Rex checkpoint, but I was actually on the subway that was headed right for it.  I started listening to the train announcer, "This train terminates at Lechmere", OK good, it doesn't stop before the Science Park station.  At least, I hoped T-Rex was at the Science Museum, I was only making an educated guess based on looking at the clue sheet.  Would my prior knowledge of this city help me or throw me completely off?  It could go either way.

I jumped off the subway, rounded the corner, and found this - yay!! 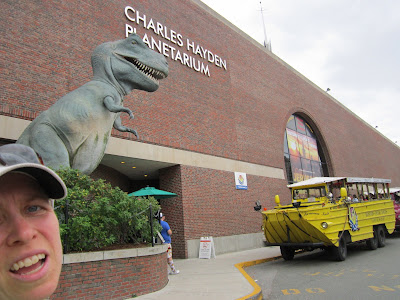 I called Dave with the bad news that I was on a detour that cost perhaps 15-20 minutes.  I initially tried the Green Line to get back up the hill, but there was no train in sight so I got back out of the station and ran for it.  Dave helped me get back to Quincy Market after I missed the turn onto Merrimac Street.

So here is my even-more embarrassing video - really, I do love the British, I do!
http://www.youtube.com/watch?v=go6bz2gjCVQ

Almost back to the finish, I ran inside Mr. Dooley's bar where Dave had prearranged for a couple tea bags to be available for me.  And they didn't even charge me for them.  Wow, thank you all!

I took a quick video of me emptying the contents of the tea bag onto my tongue and holding it there for 10 seconds.  It was slightly comical trying to talk to Dave while finishing the video with tea leaves in my mouth, but not really worth posting on YouTube.

One block over, and I was done!  Zack Attach was already there, having run a very clean race and easily coming in first.  Even without my detours I would not have beat them.  I was most happy to be able to return Mike's phone to him, glad that worked out!

In the meantime, John was still out on the course dealing with long delays on the Green line.  Here are some of his photos: 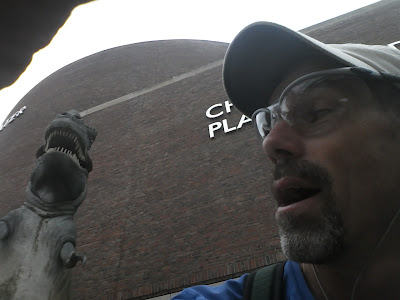 The right way to get the Fenway Park checkpoint photo! 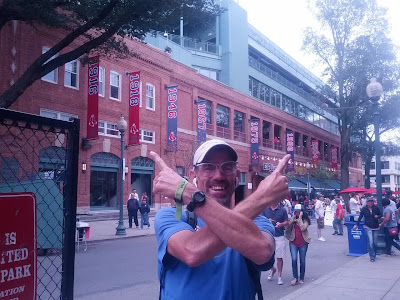 John had put down his pen, clue sheet, and map on a table while someone took this picture.  He then ran a block away before remembering to pick them up, so he went back to get them.  But the table was gone!  He asked around and managed to come up with the items from a nearby trash barrel.

But at least he had flashed the "X-pose" in his picture. 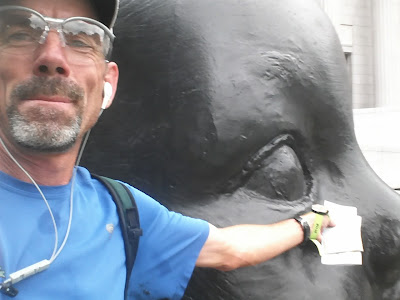 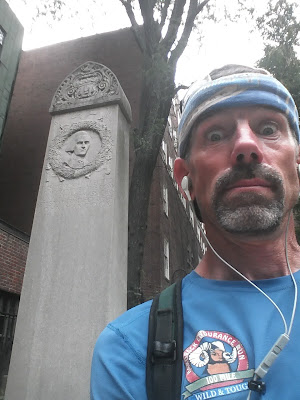 I met John at the Rings fountain to take his video there, and it's worth a giggle to watch it again (especially for the reaction sounds from the spectators):
http://www.youtube.com/watch?v=kKQ3iRF2IN8

He got back to the finish line, complete with tea leaves in his mouth, just in time to snag 3rd place before Mighty Motrin came running in a couple minutes later.  Not our finest hour(s) but we'll take it!

A photo compilation from Xplore's Facebook page - we were attempting a new version of the "X-pose" on the lower left: 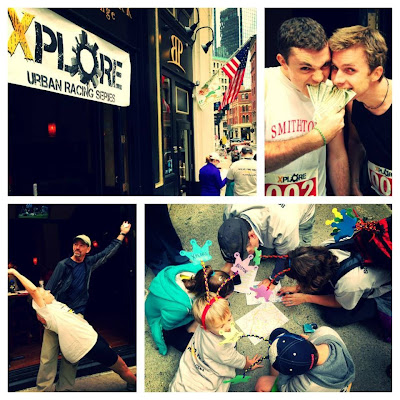 Thank you guys for another fun day in the city!

We capped off the weekend with an excellent evening with Elaine and her family and their new dog Sadie on Saturday night.  Then Sunday we drove up to New Hampshire to run the Pisgah 50K trail race.  Beautiful weather, lovely woods, and we now have done a race together in state #25!