We were looking for a Super Dare qualifier and any excuse to spend just one more weekend in New York City.  We got both last weekend, along with beautiful weather and some "hang-out time" with Ron and Jerome for the first time in quite a while.

All in all, lots of fun!

The Urban Dare race started on 14th Street a couple blocks east of Union Square.  From here, the race course could go in just about any direction for whose-knows-how-far.  At least there were plenty of subway options along 14th Street, we just needed to figure out whether to jump underground, where, heading in which direction, and which stop to get off at...

One of the checkpoints referenced a tavern and George Washington, so I suspected we might be going way south.  Dave on the phone confirmed this when he figured out another checkpoint that was near City Hall.  We had been walking toward the green line and that was all we needed to run down the stairs.  Amazingly, there was a subway train sitting there waiting for us, so we jumped right on with one other team.  Happily, it was a #4 train heading all the way south.

Things were starting out well.

While on the train we pulled out all the maps we had stashed in John's pack to try to figure out the running routes in the angular streets around Wall Street.  We were debating which subway stop to aim for, thinking initially we might try City Hall but then changing to Bowling Green.  Reading through the clue sheet, John recognized the "Roots" sculpture in the same area.  He thought it might be right at the end of Wall Street, so as the train pulled into the Wall Street station we impulsively decided to get off there.

That was about perfect, as far as that checkpoint location goes.  And the sculpture is awesome too: 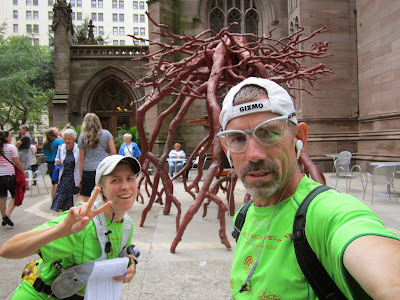 We had a bit more difficulty getting over to Fraunces Tavern trying to rely on our memories, with help from Dave who was trying to catch up with where we were vs. where he thought we were going to be.  Also a guy on the street who enthusiastically pointed us in the wrong direction at first, and just as happily pointed us the right way as we came by him a second time... 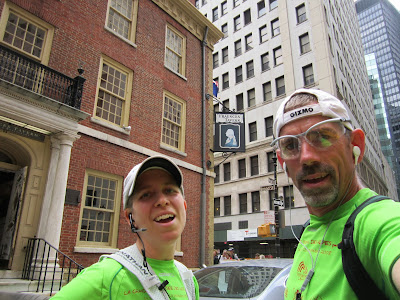 It gave our crew time to locate and map the bonus clue of a "Dancing Figures" sculpture.  We initially picked the wrong sculpture by Keith Haring but quickly adjusted to find this around the corner - cool! 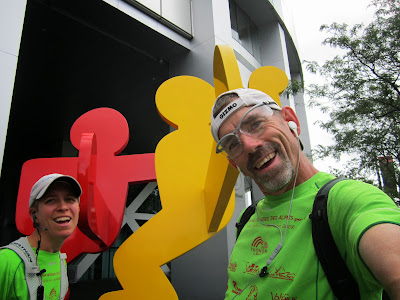 We ran back up Pearl and over to Water Street to find an inland lighthouse at the Titanic Memorial.  No race photo because this was a "dare" - specifically the Spellbound Dare where we had to find numbers corresponding to letters and add them up for the word on our passport.  We knocked it out and got a stamp on our passport.

A picture of the lighthouse, because it's pretty cool: 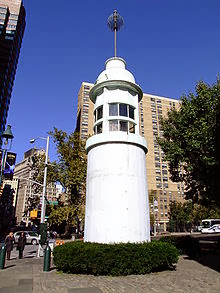 Then we ran on up to City Hall Park for another dare, this one a 3-legged shuffle around the fountain.  We spotted the team that had been on the subway with us, go ladies!

It was a short hop up to Foley Square, but we spent a few minutes there looking for a race volunteer.  Another couple teams were also wandering around, and we all decided the Dare must be missing (turns out the guy showed up late).  Here is our photo there instead: 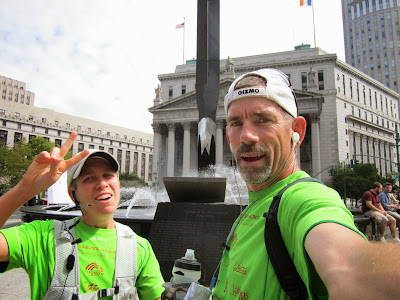 We tried to convince a couple of tourists to help us with a picture of them posing like the famous WWII kissing photo by Eisenstaedt.  The first couple I asked was completely "no English", the 2nd one claimed to speak some English but we had a devil of a time trying to explain what we were asking them to do.

We really should have worked harder at that or tried again with someone else afterward... this is clearly borderline unacceptable as a race photo goes: 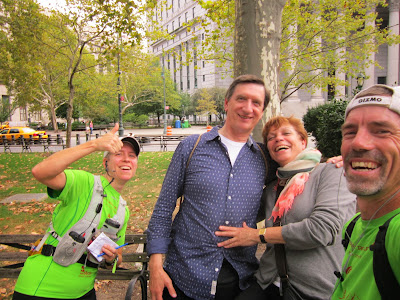 Dave directed us to turn north on West Broadway and look for Moore Street going off to the left.  It was supposed to be between White and Walker St, but when we got to that block we saw nothing but buildings.  Dave suggested it might be a small alley?  We weren't sure if we should try opening doors looking for a way through...

We were all confused until I told Dave we were at "393 Broadway" and Google pointed out that BROADWAY is 2 blocks east of WEST BROADWAY.  Ah ha!  We all will not soon forget this fun fact.

Soon we were in the right spot, in front of a firehouse that showed up in the movie Ghostbusters - too funny: 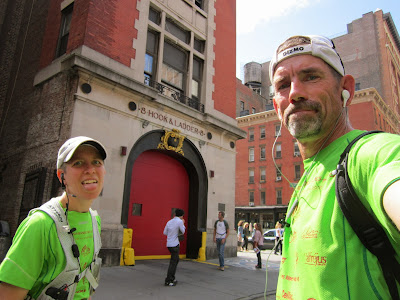 From there we ran several blocks up West Broadway and turned down Prince St. to find one of several galleries in this area: 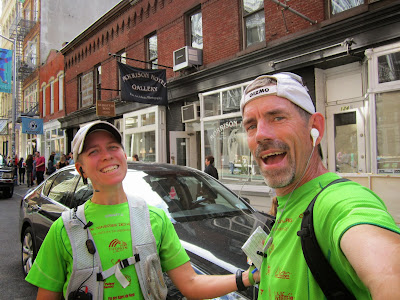 Across Houston to the south end of NYU, we found a gigantic Picasso Head in a courtyard, along with a couple volunteers administering a trivia dare.  We got the easiest trivia questions ever, something to the effect of:

What emergency response technique did Henry Heimlich invent?
What was the only thing on the menu at the Billygoat Tavern in a Saturday Night Live skit?

Another excellent location that deserves a photo even though we weren't required to take one ourselves: 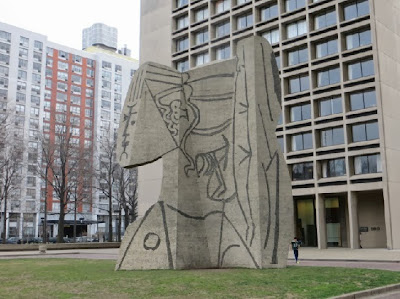 From there Dave directed us west into Greenwich Village.  I have not been looking forward to the day we would need to do race navigation in that area, with the crazy, confusing angular streets.

I was right to think this.  We made almost a full tour of the triangular block of 7th Ave, Bedford, and Commerce/Cherry Lane, frustrating all 3 of us before we figured out what we were doing and located the Cherry Lane Theatre.  At least it was a small block. 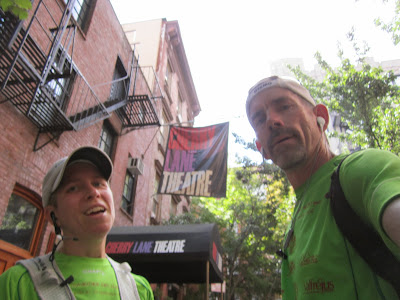 The zigzag back east went better, even with all the pedestrians to dodge.  Dave did a fine job of getting us to the Blue Note Jazz Club: 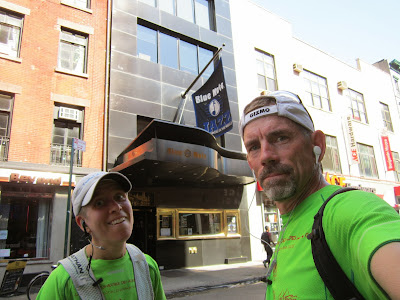 Another excellent bit of navigation to the east, including a perfect angle through Washington Square Park, and then we were at the Cooper Union Library.  We weren't quite sure that we were at the right building at first, as it didn't have any "library" signs, but the lady inside immediately confirmed we were at the right place.  Apparently we were not the first team to inquire. 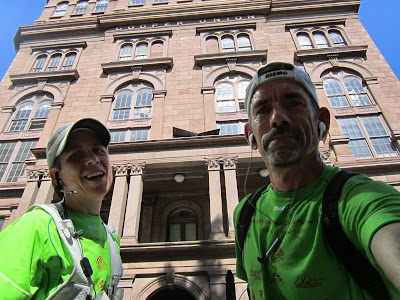 Just a few more blocks of running and we were done!  Our photos were good, for first place.  A fine way to finish up with our Northeast Racing Series.  Huge props to Dave and our crew for helping us get there.

Side note - the race director didn't have to accept our WWII scavenger hunt photo, but if he hadn't we would have had the option to try again or take a 15-minute penalty.  We had enough time before the next team arrived that we could have accomplished this, so we don't feel quite as bad about that.  But it's a good reminder to not be sloppy next time. 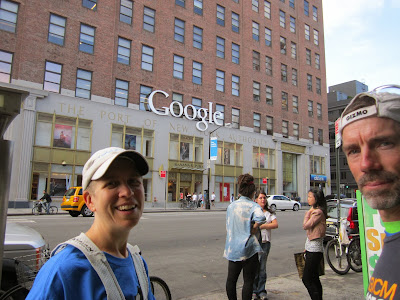 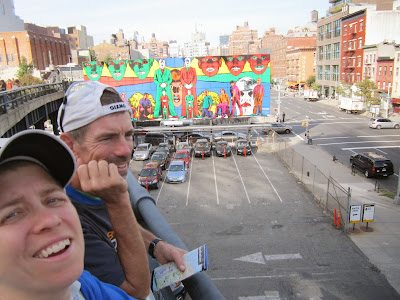 A fun High Line Trail window box where people can sit and watch traffic below their feet: 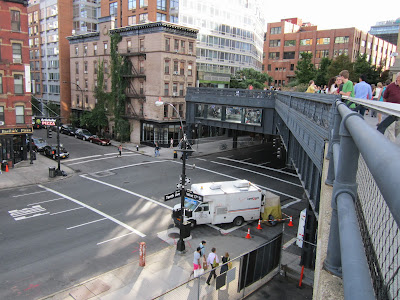 The next day we ran over to see Grant's Tomb, then spent the afternoon wandering around museums.  Ron and I spent some time at the Met.  It was so great to see you, Ron! 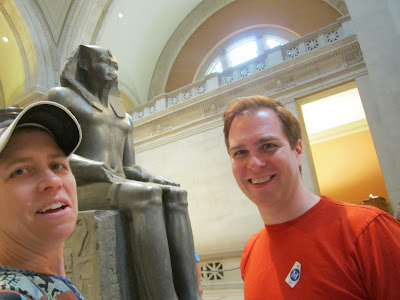 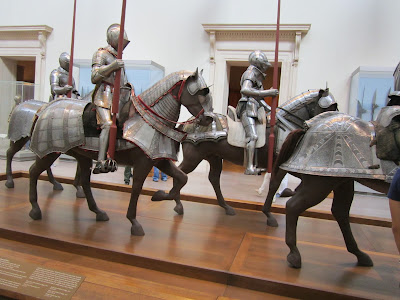 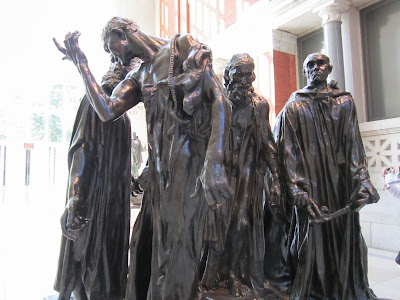 A hawk hanging out on top of the Met, attracting a lot of attention: 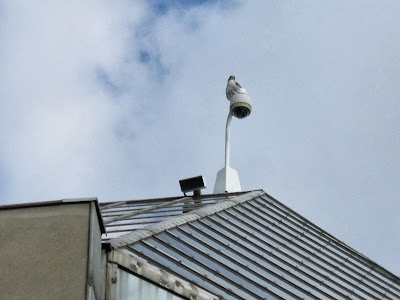 Another fun one in NYC!