New city, another attempt at a classic race, the Super Dare!  I was a bit intimidated coming to Los Angeles to do a championship race, but we spent a couple days traipsing around downtown and learned enough to feel comfortable with the grid layout and general location of things.

What we missed was the potential for a long subway ride out to Hollywood and back.  When we got our clue sheet and found at least 4 checkpoints out there, I had several moments of indecision.  The right call would have been to get on the subway and head there immediately.  Instead we stuck with the area that we knew first.

I decided that the de la Hoya statue at the Staples Center was too close, so we jumped on the subway toward Grand Park and ran down the street to the Molecule Man sculpture: 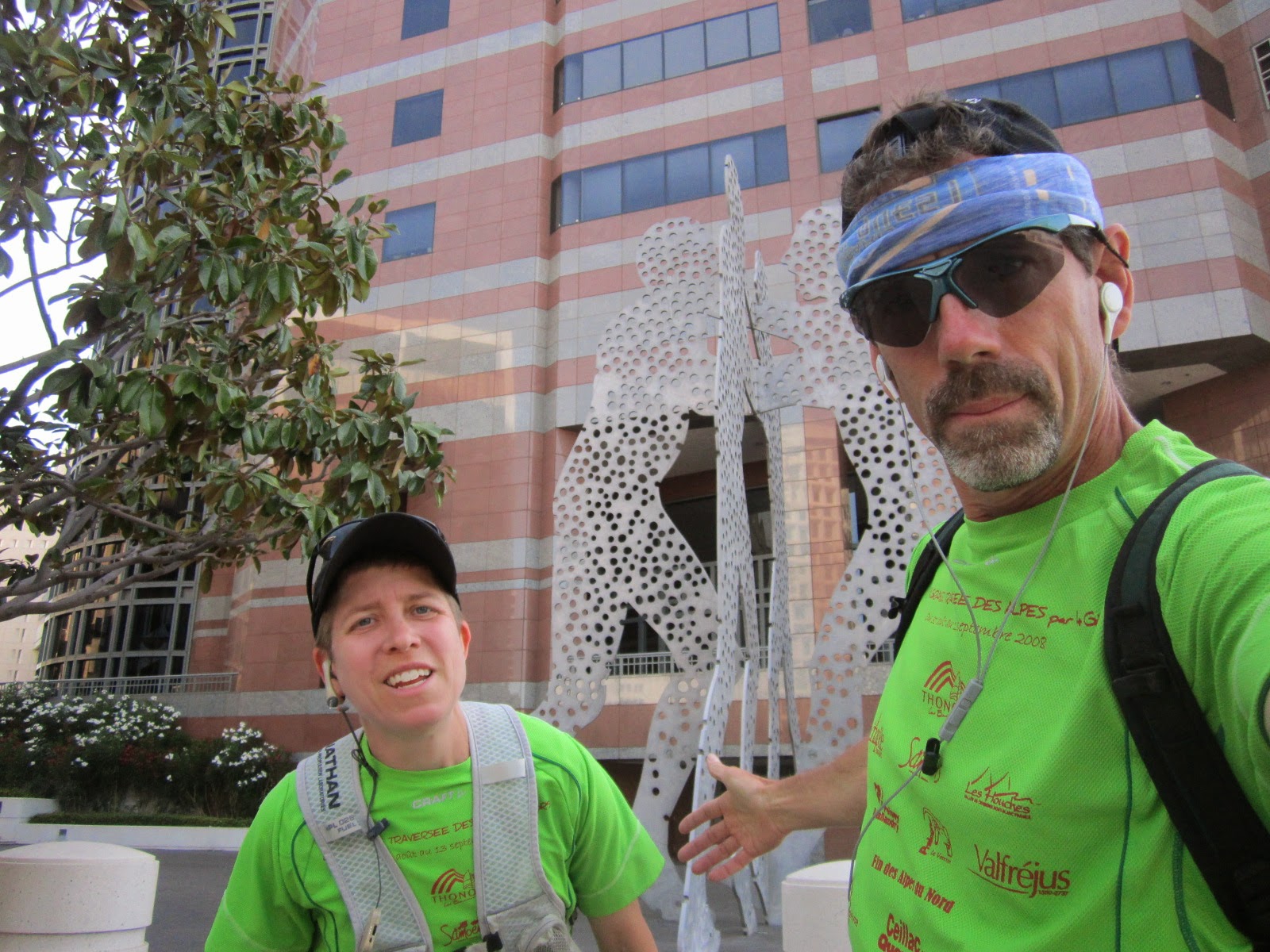 Then a couple blocks north to El Pueblo, where we found a statue of a previous governor.  What we didn't find was a volunteer for the "Balloon Dare", so we took our photo with the statue: 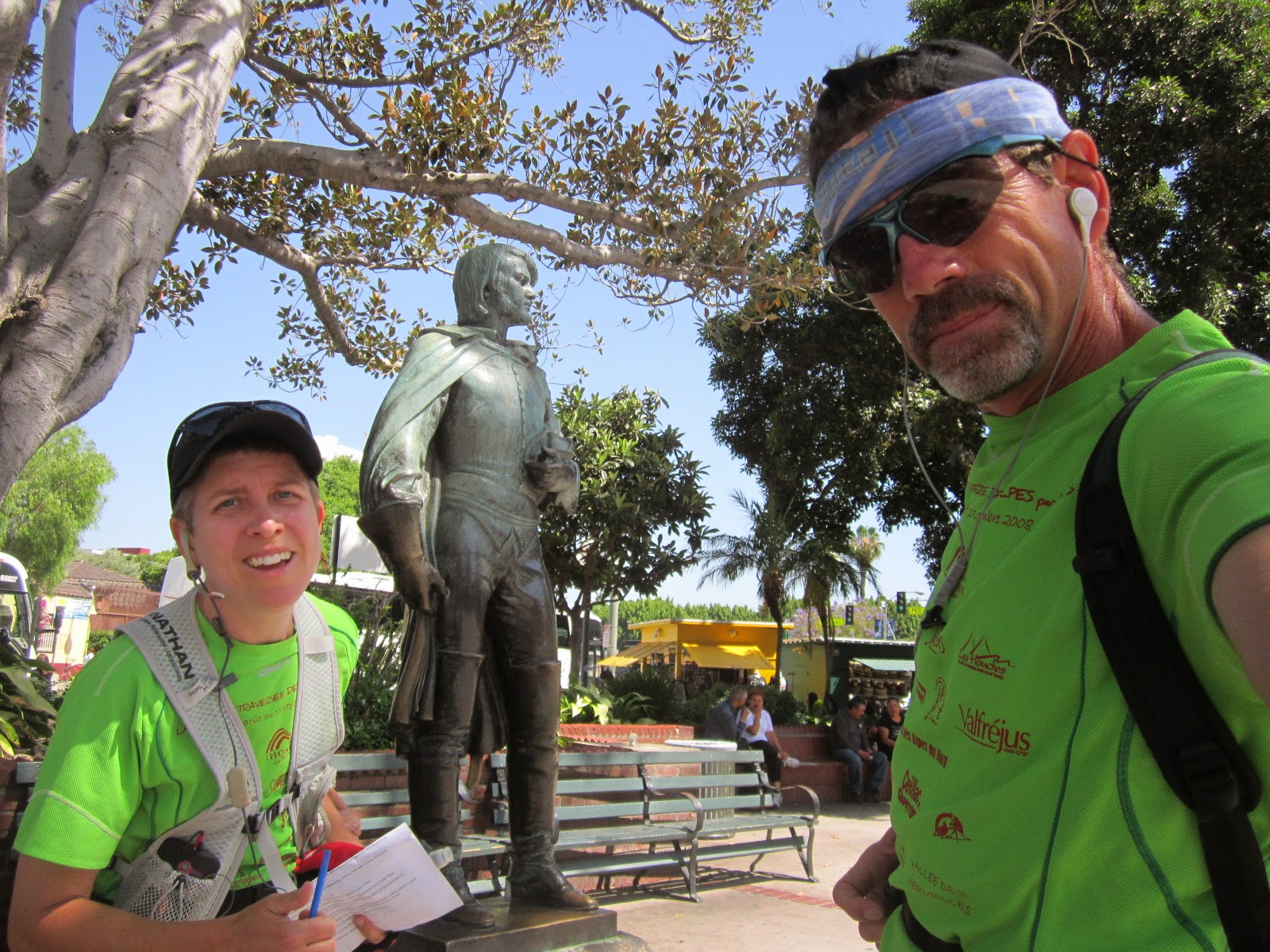 Running back toward town, we encountered the volunteer walking toward us, and he gave us the materials to make the balloon sword.  Passport stamp acquired, we were on our way without too much extra delay.

"Too much extra delay" was happening in other ways, however.  First we ran around the wrong building looking for the "In the Eye of the Storm" sculpture, finally getting help from a friendly policeman who knew where it was (I was impressed with that). 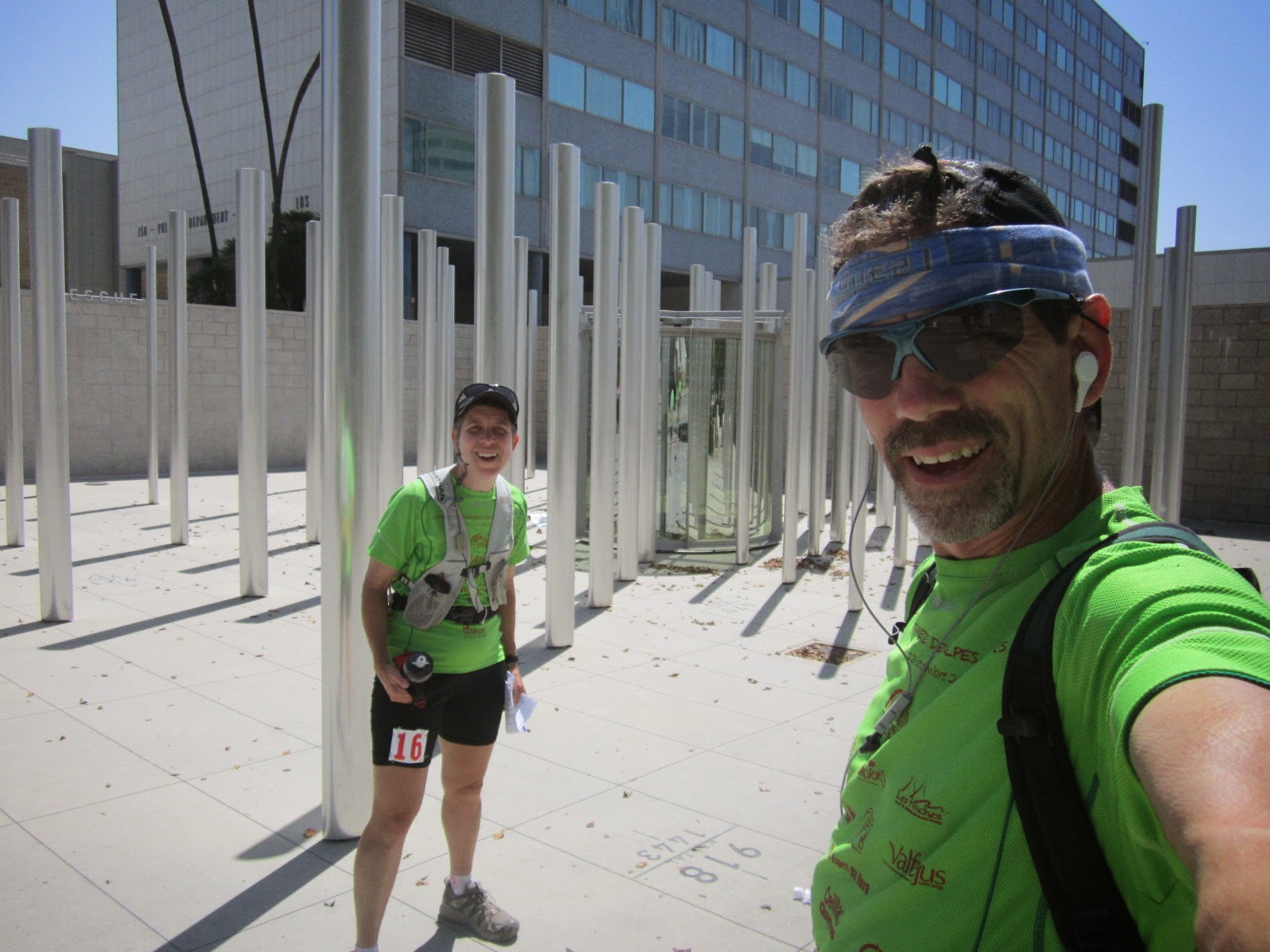 Next we continued south, hitting Dr. J's Vibrant Cafe (I guess we ran there pretty fast, from the looks of us): 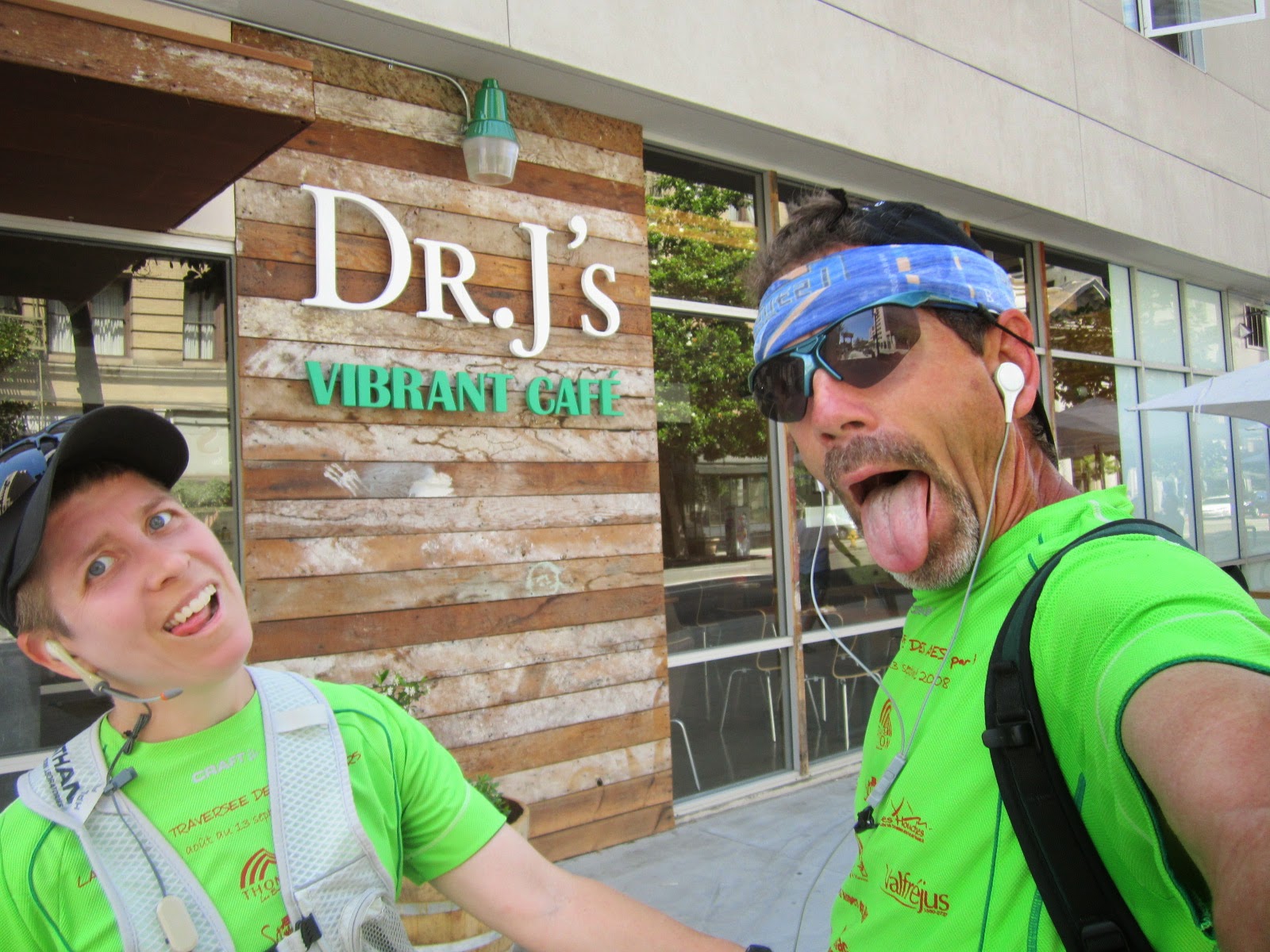 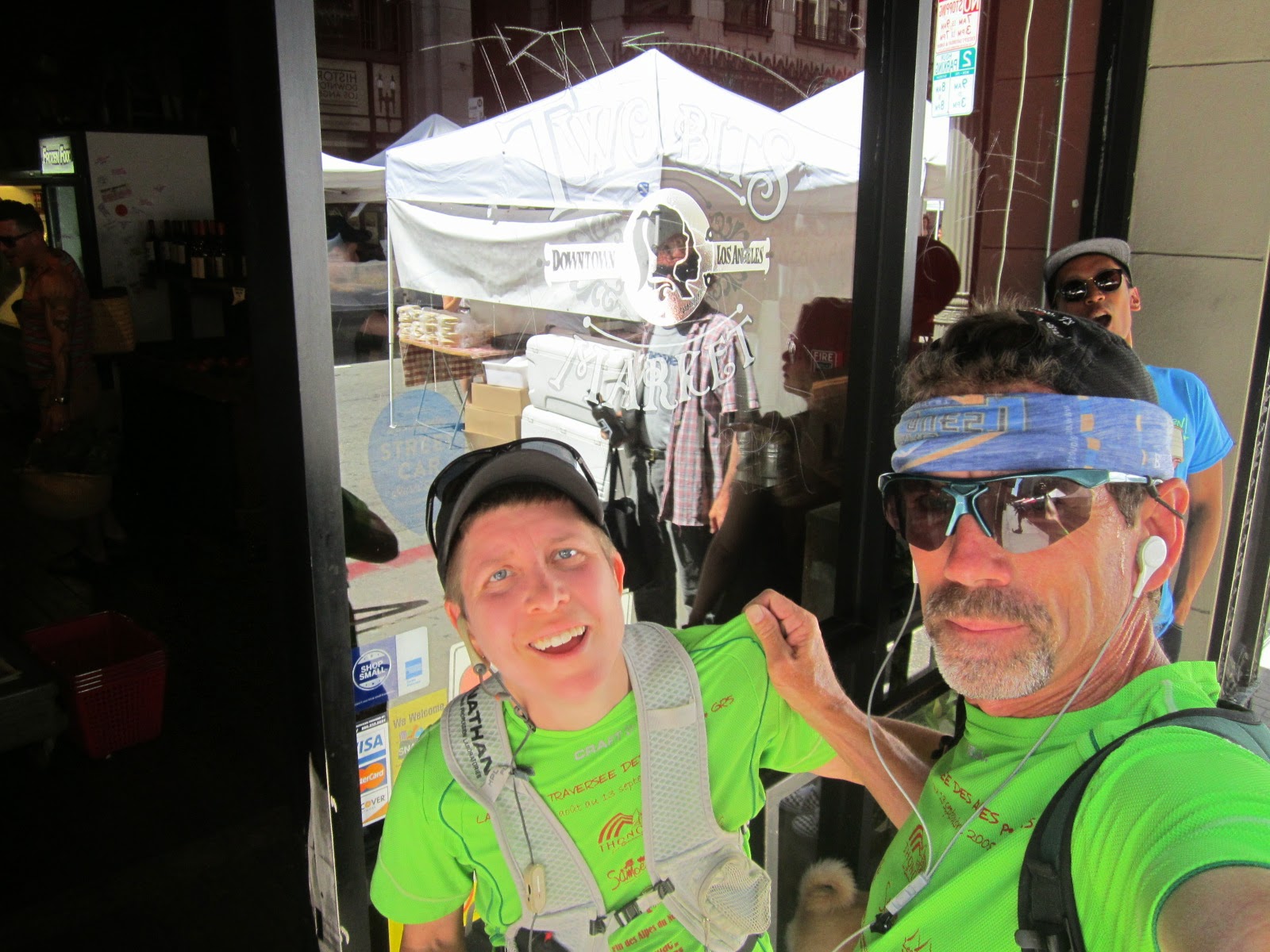 And now for "Too Much Extra Delay" #2 - we had missed the sundial at Union Station.  Argh!  Big error.  We continued over to Pershing Park, did a beanbag toss, then got on the subway back to Union Station.  Much more ideally, we would have been heading to Hollywood at that point, but there is no skip point in this race so we had to go back either now or later. 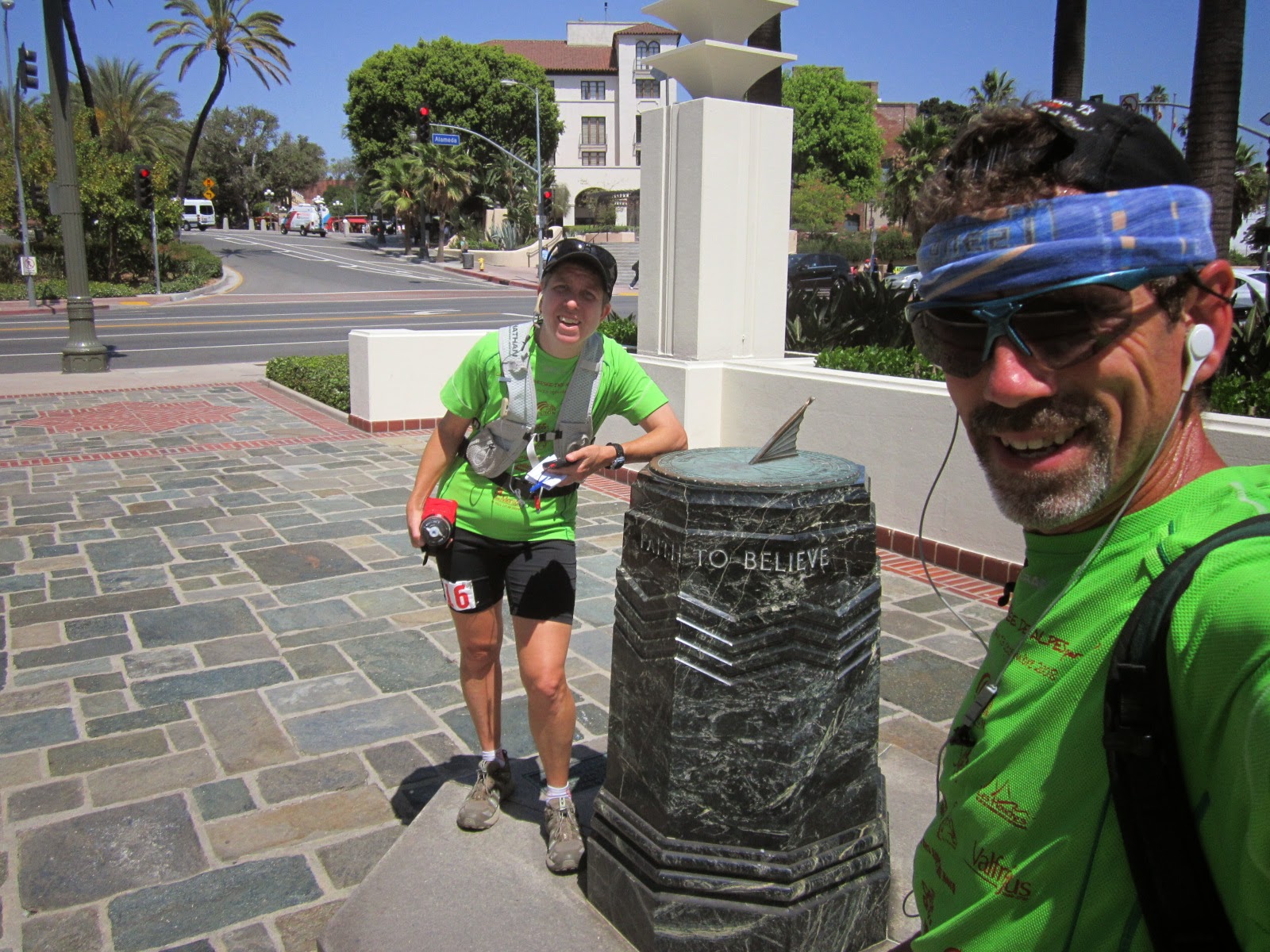 And BACK on the subway... luckily we never had to wait too long for the train in all of our travels, but the extra ride cost us perhaps 20 minutes of backtracking.

Finally, the long journey up to Hollywood.  We had never been there, so I was pretty excited.  "John, we're going to Hollywood!"

We had a pretty good run around that area, starting with finding Snow White right off the bat. 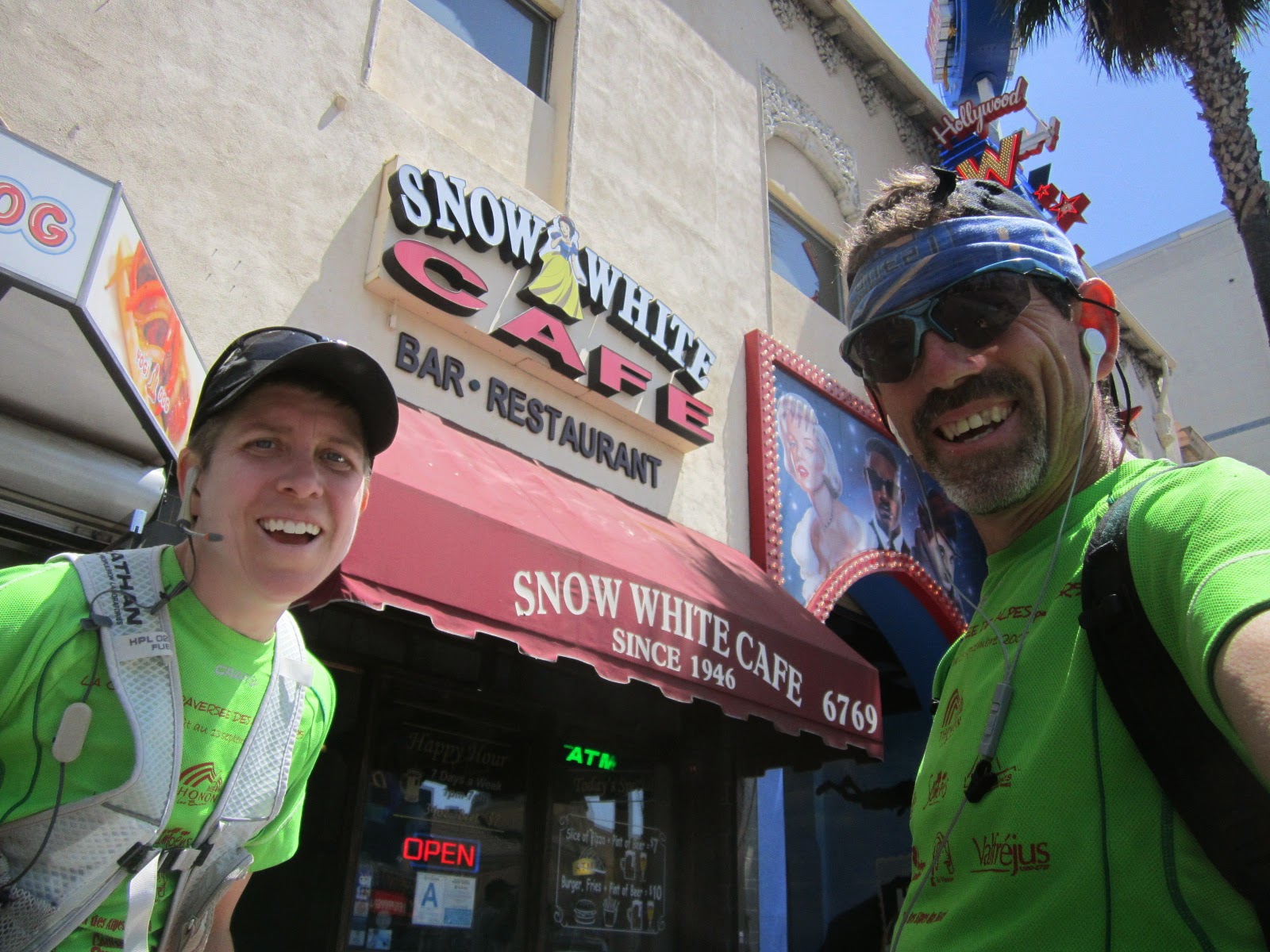 Minor glitch when I couldn't see the Guinness World Records place right across the street.  Shouldn't it have a big sign on the marquis?  Well, either I'm blind, or it doesn't.  John wanted to cross the street and look closer, which totally would have saved us a couple minutes.  We were sort of also looking for our Star on the sidewalk (ours was "Walt Disney") on the north side of the street, but that's a weak excuse.

Finally the video screen flashed "Guinness!" and I was like OH! so that's the place, and we crossed the street to find the 5.5 ton rock that you can spin: 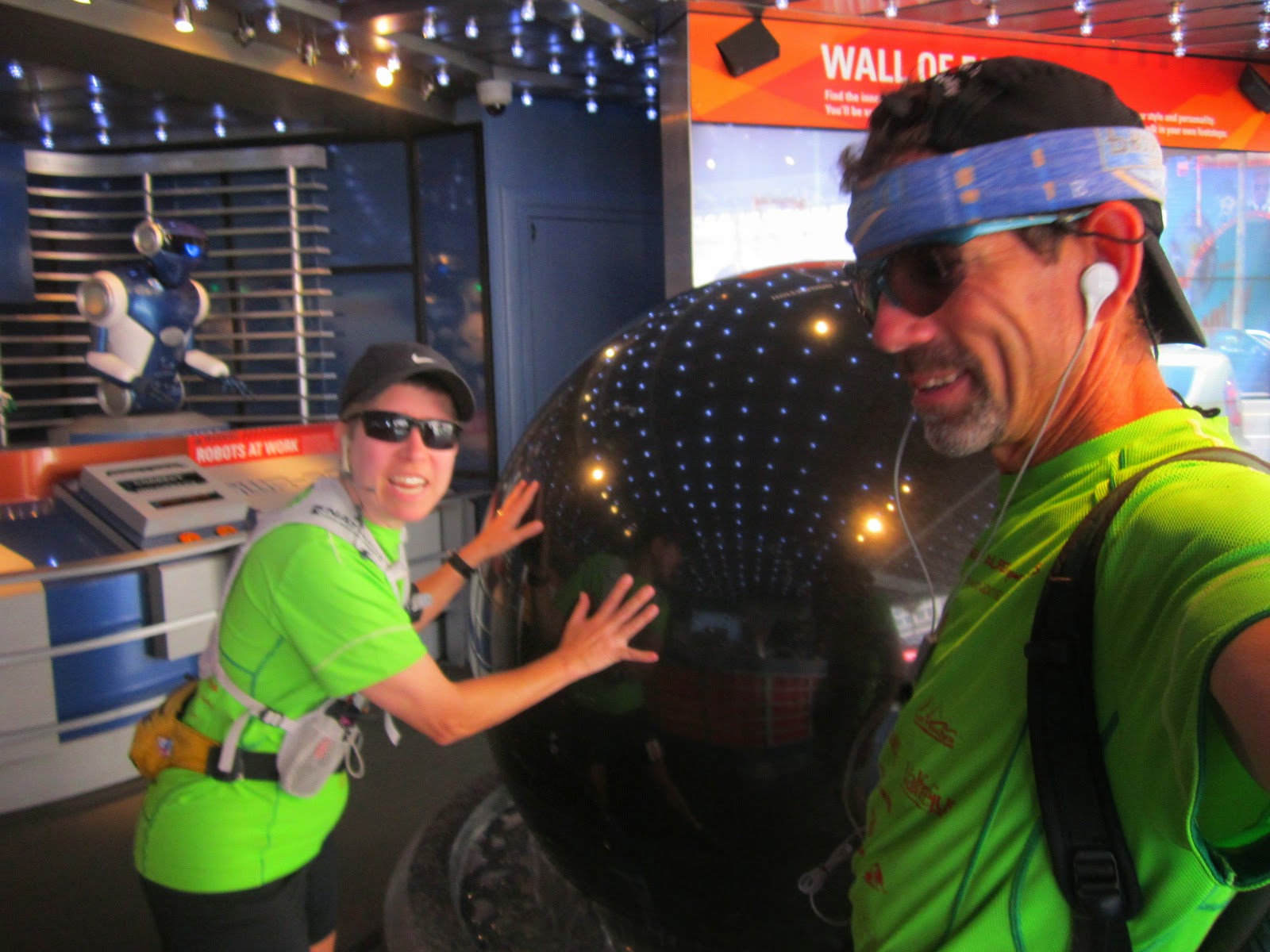 Back across the street where John immediately located Walt Disney's star - too cool! 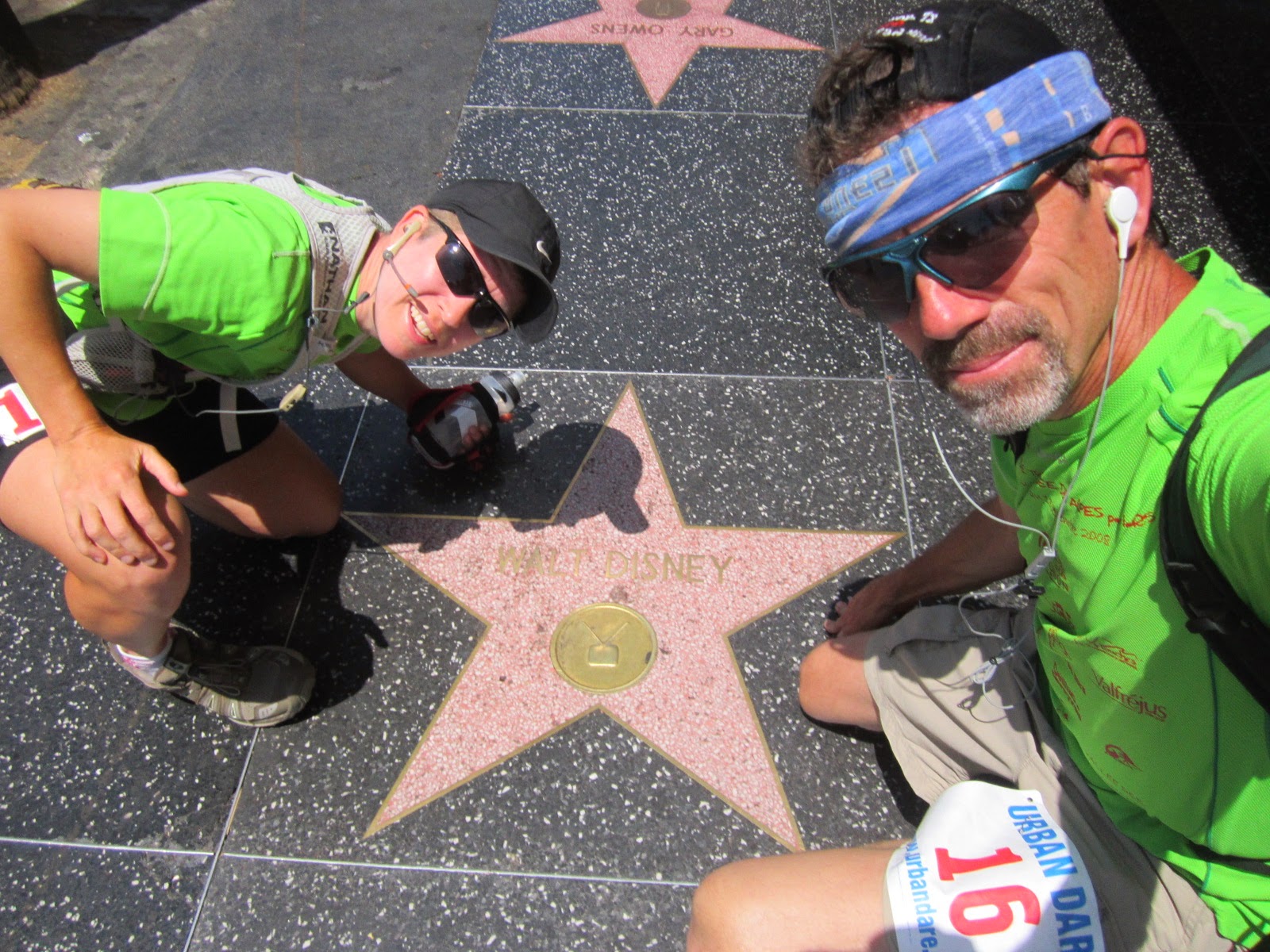 Away from the hustle and bustle of Hollywood Boulevard, we ran down a side street to a mural of Jim Morrison: 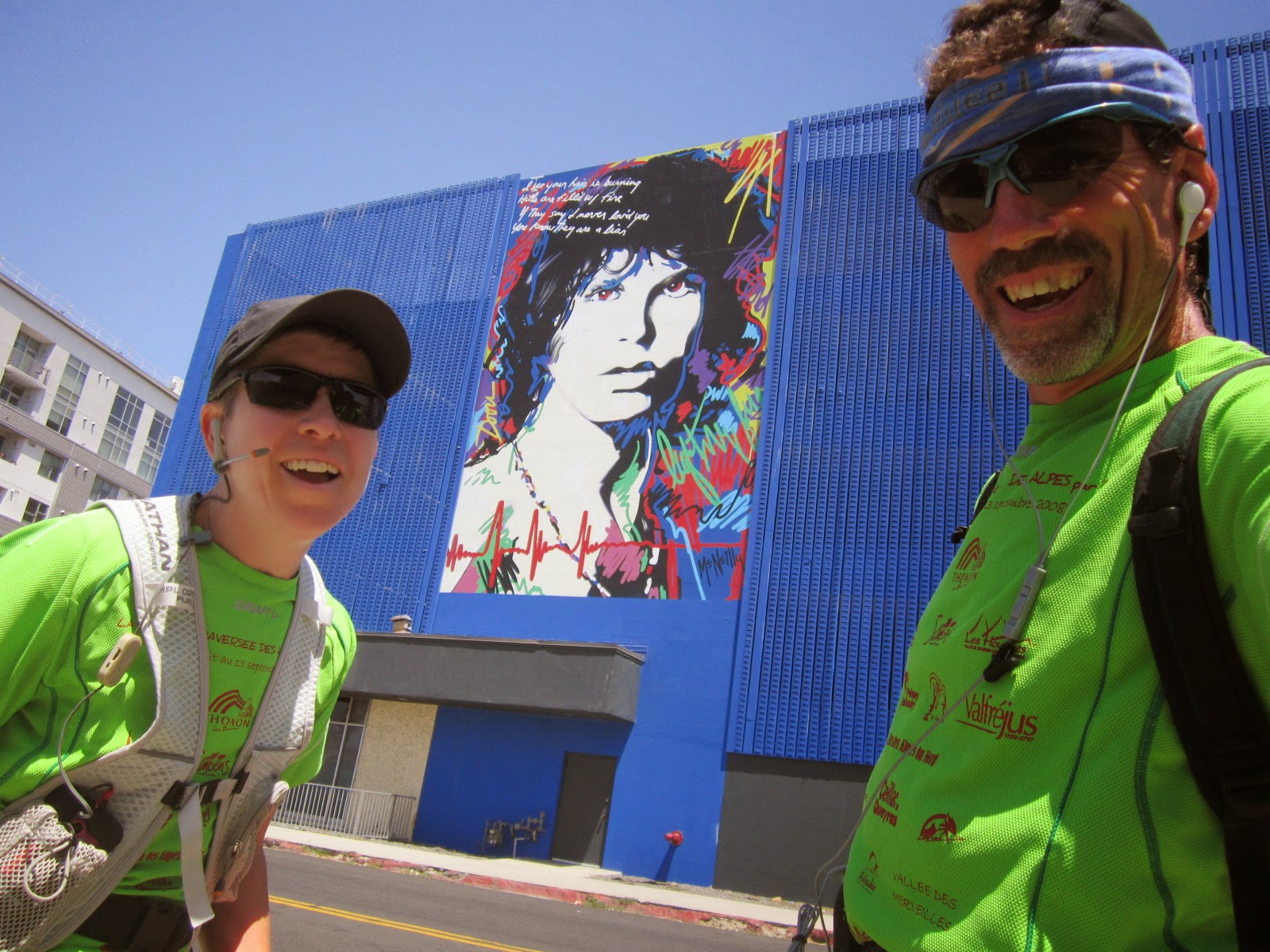 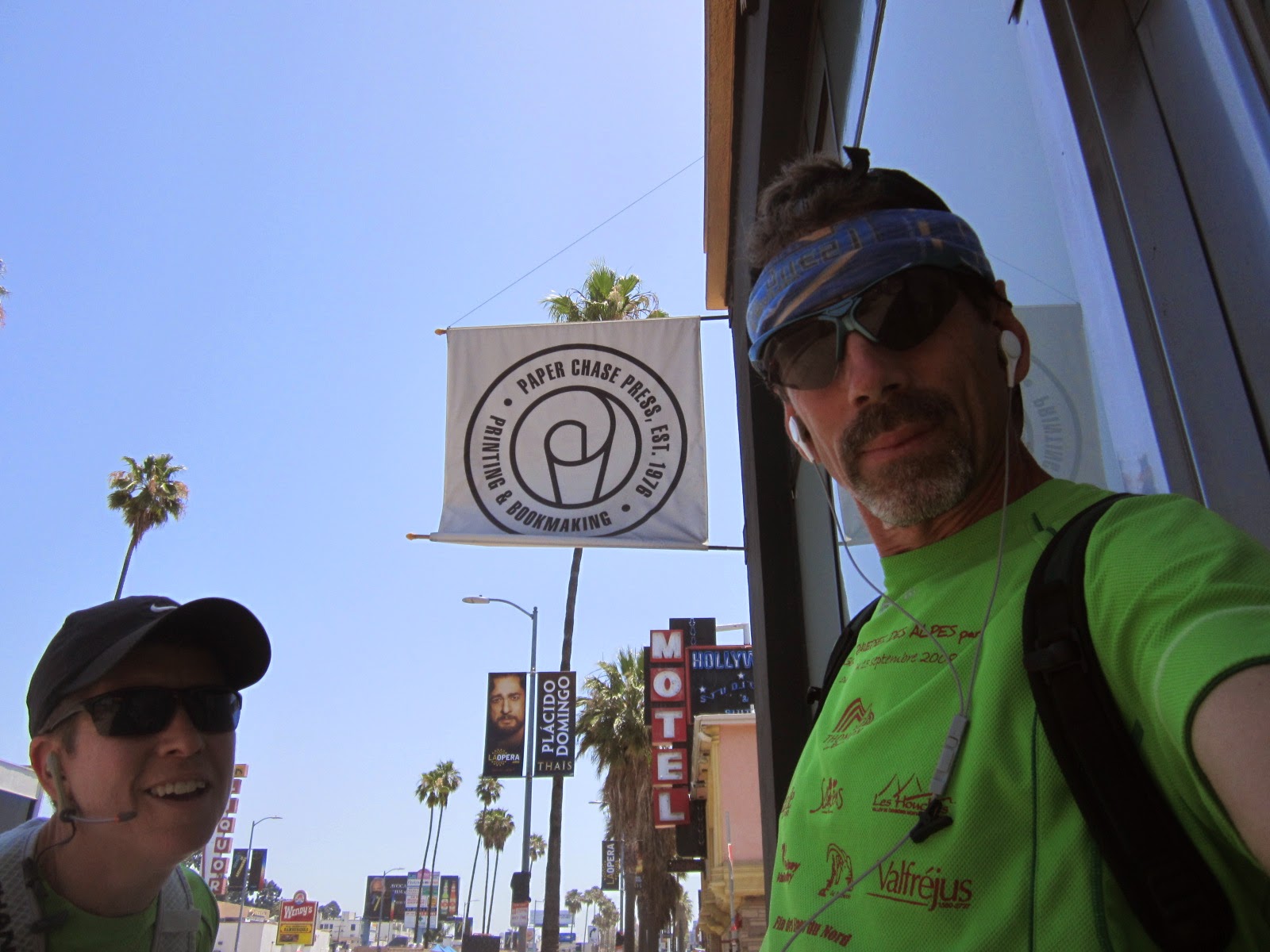 Then to the RockWalk of Fame where we searched for a few seconds to find the hand prints of the band The Smashing Pumpkins: 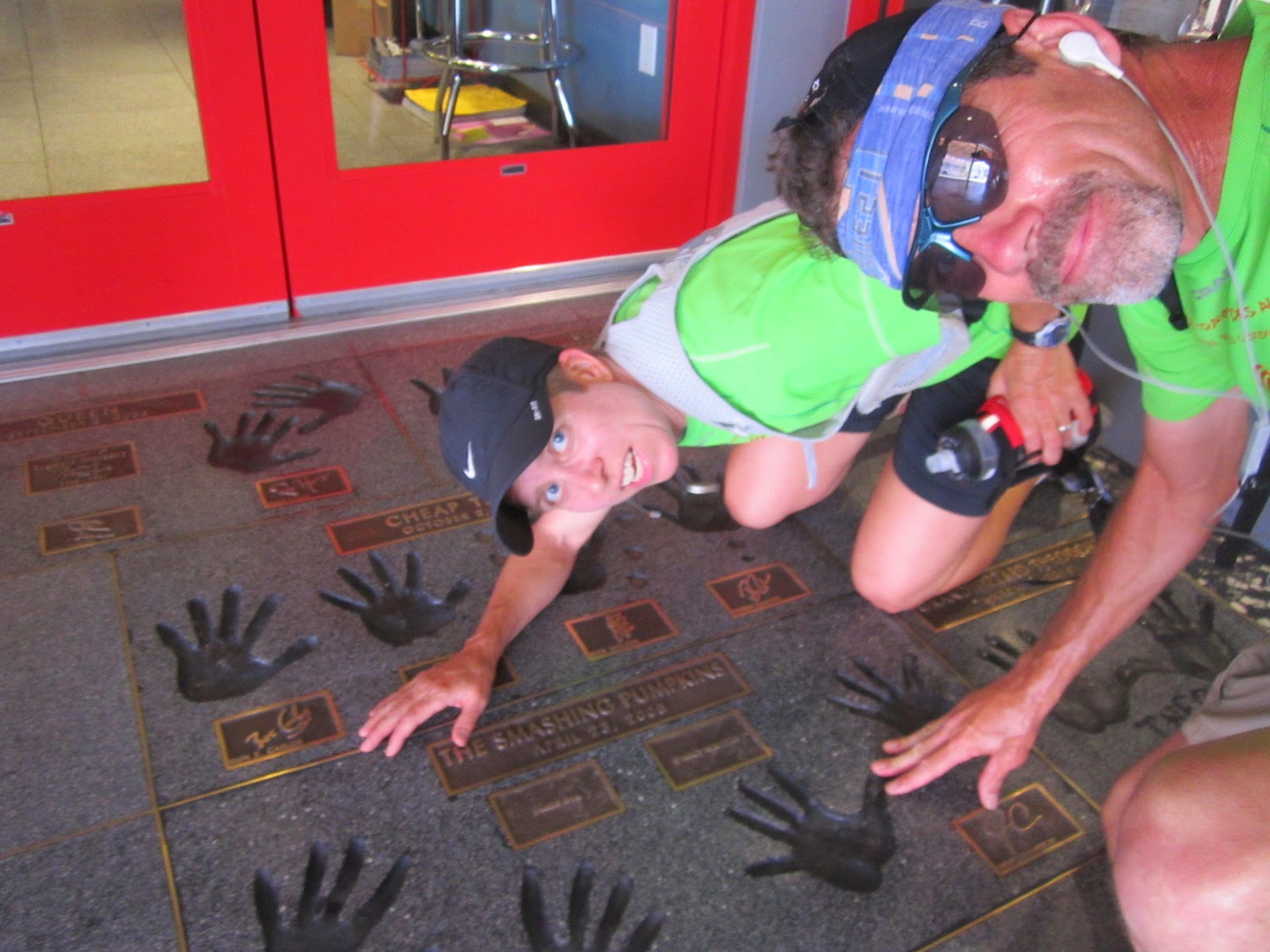 It was a bit of a jog down to a park, and Sheila told us we were looking for a checkpoint and the bonus location.  The checkpoint was the first thing we encountered, the Babi Yar Memorial: 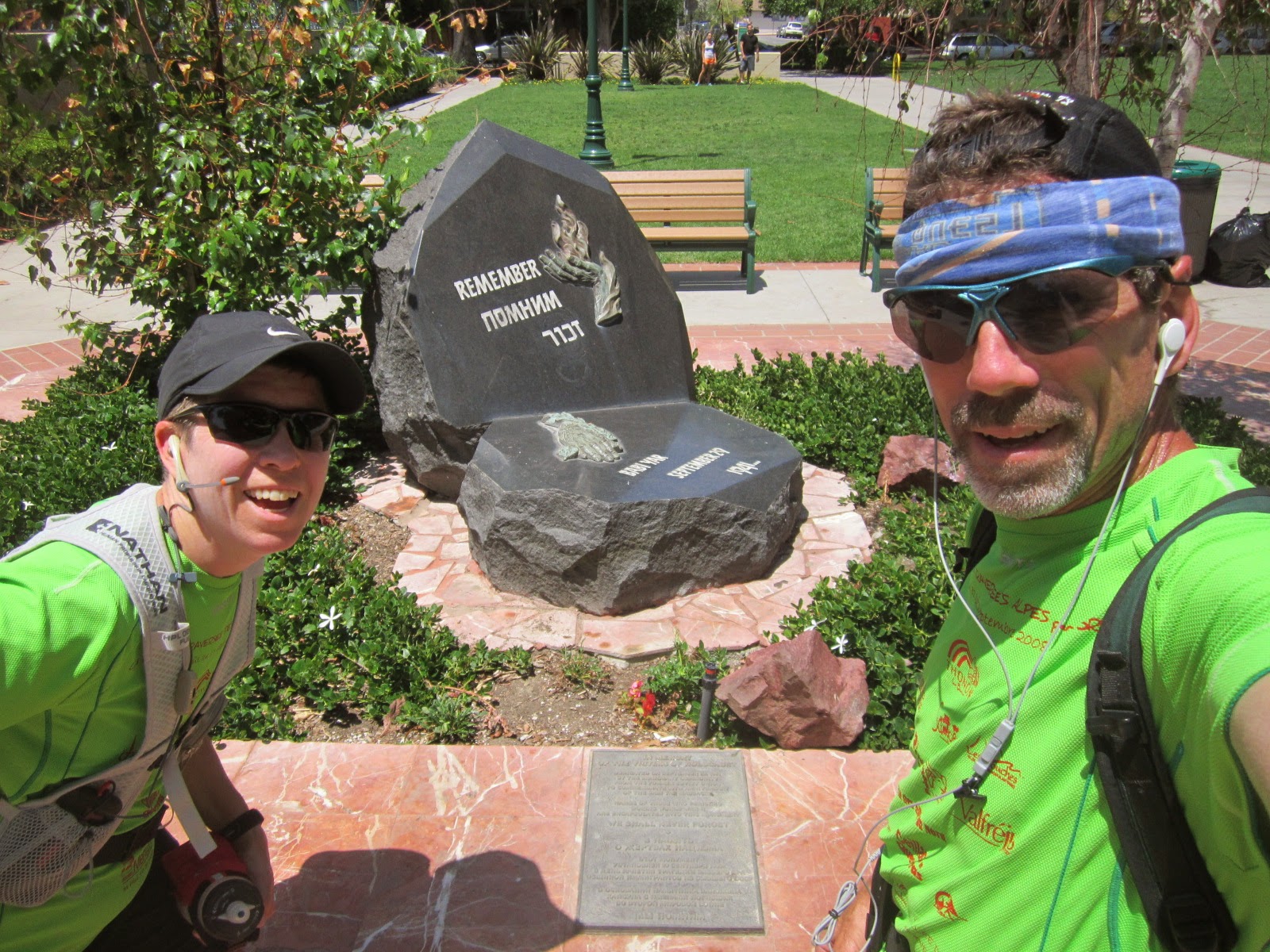 Then we started looking for the bonus, called "Baby Beast".  Well, we found its mother, and the sign suggested we might be looking at the whole sculpture - "Three Horned Beast (and Baby Beast)".  But the clue was to find the Baby Beast, which Sheila told us was metal and silver in color.  We had enough information to realize we weren't at the right place, but we took this picture anyway: 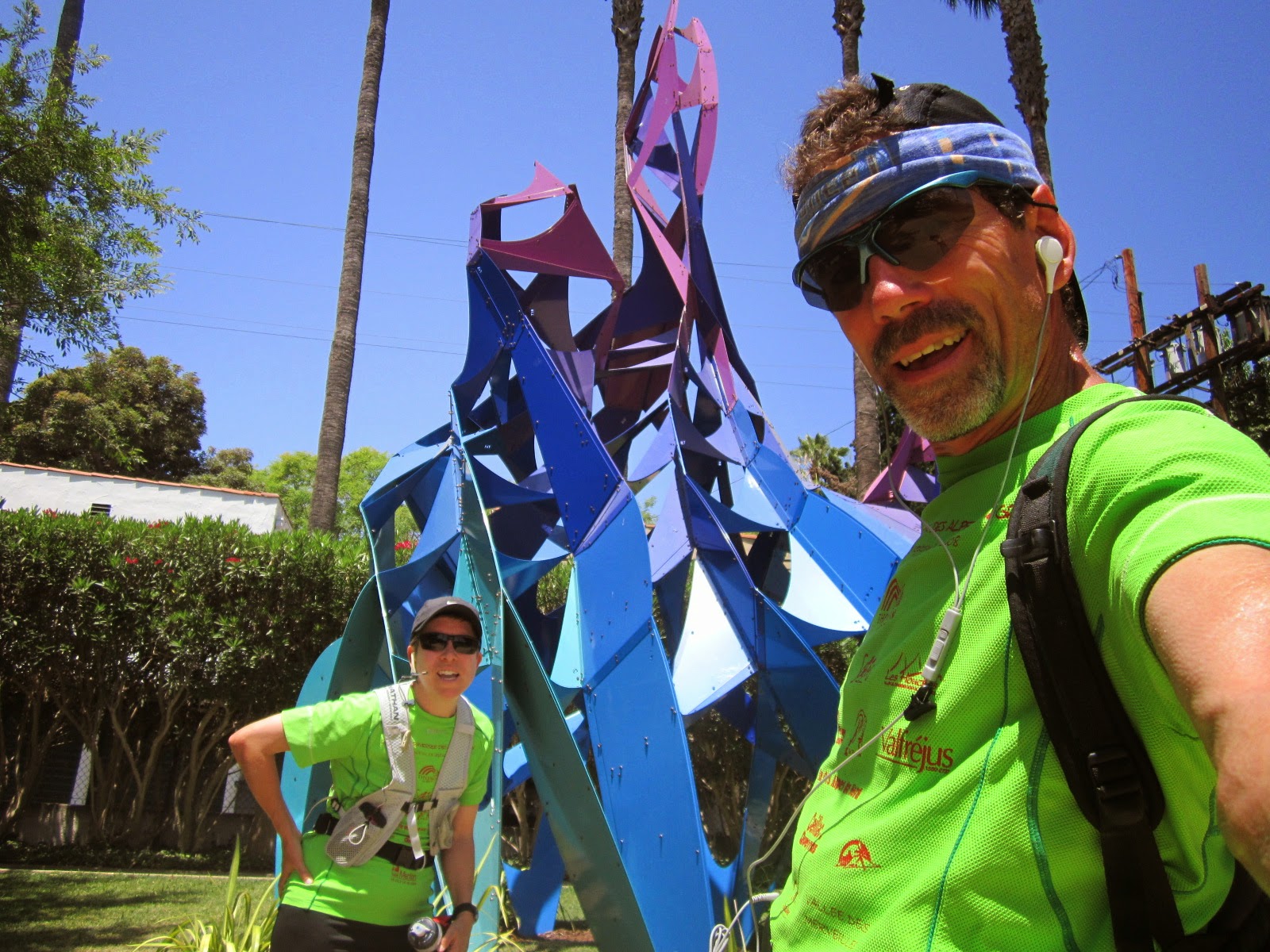 We then left the park and started back.  We found out later that the Baby Beast was on the south end of the park, so it might have taken us a few minutes to find it.  It wasn't certain whether we would have got it within 10 minutes (which is how much the bonus was worth).

On the way back to the subway we found our final Hollywood checkpoint - Kermit the Frog dressed as Charlie Chaplin, standing on top of the Jim Henson Studios building.  We could see him a long way away, very cool: 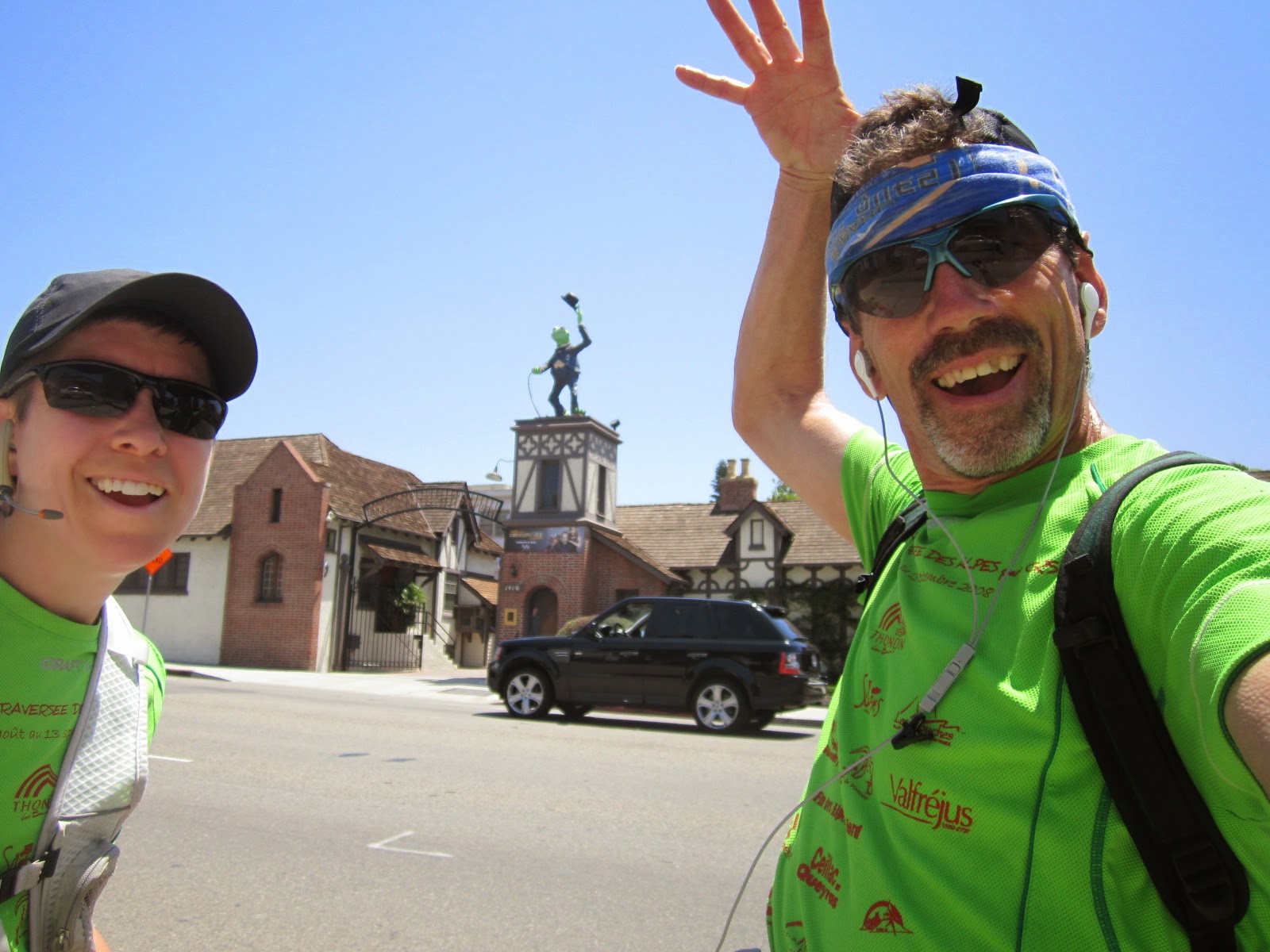 Another long subway ride (I think at least 3 other teams were on the same train).  We were happy to get off at 7th Street instead of taking any more trips up toward Union Station!

We ran down to Grand Hope Park and did a quick dare where we walked around a fountain while keeping a soccer ball between our bodies without using our hands.  Then over to the Staples Center to get our picture with Oscar de la Hoya finally: 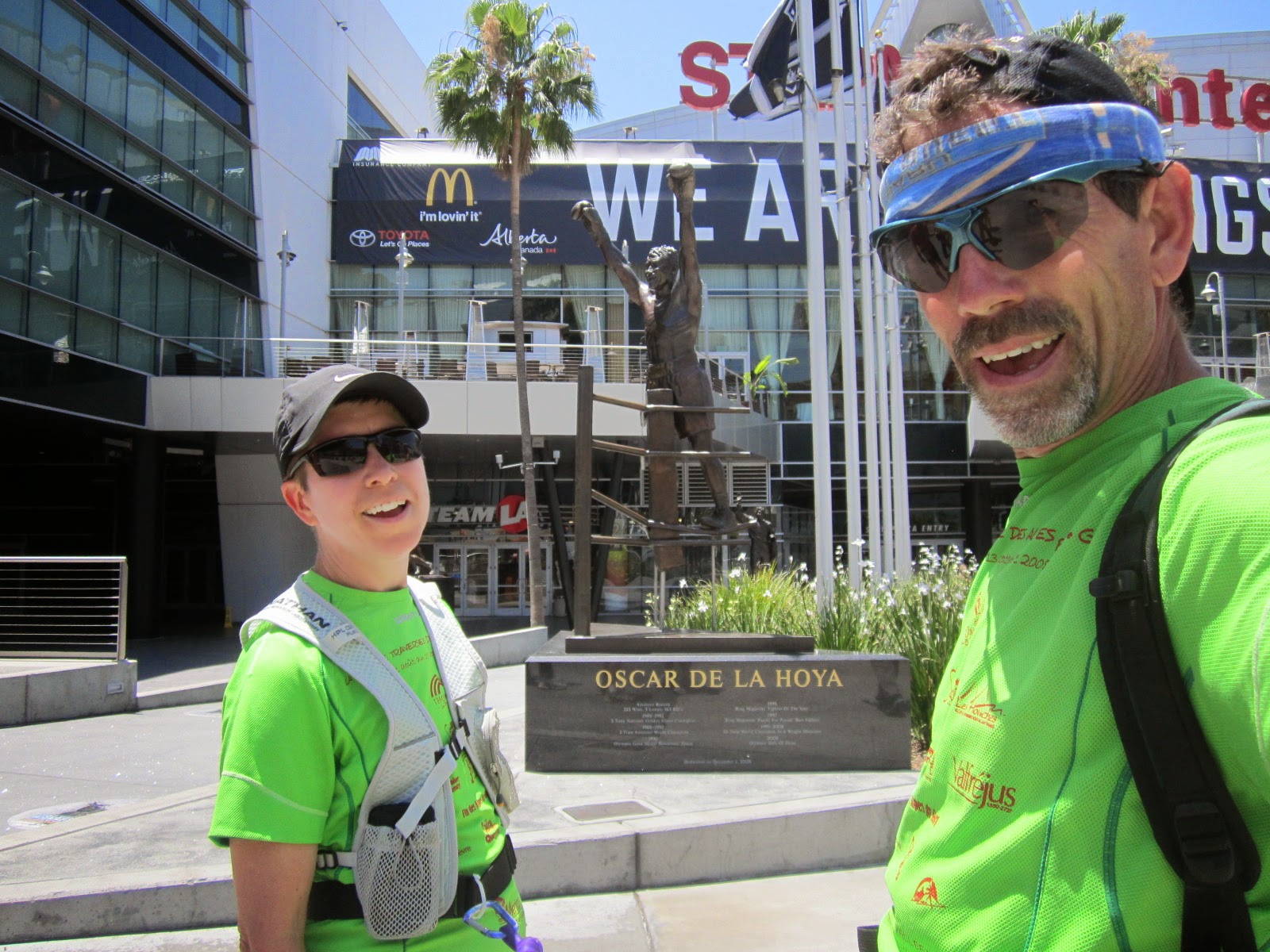 And back to the finish!  Chris and PK were there waiting, and they had the correct bonus picture, so they handily won the Sunday race.  We were 2nd place, which combined with our obstacle course and trivia placings put us solidly in 2nd place overall (still behind Chris and PK).  Will and Jen moved up several spots with their strong 3rd place run on Sunday to finish in 3rd overall.  Congrats all! 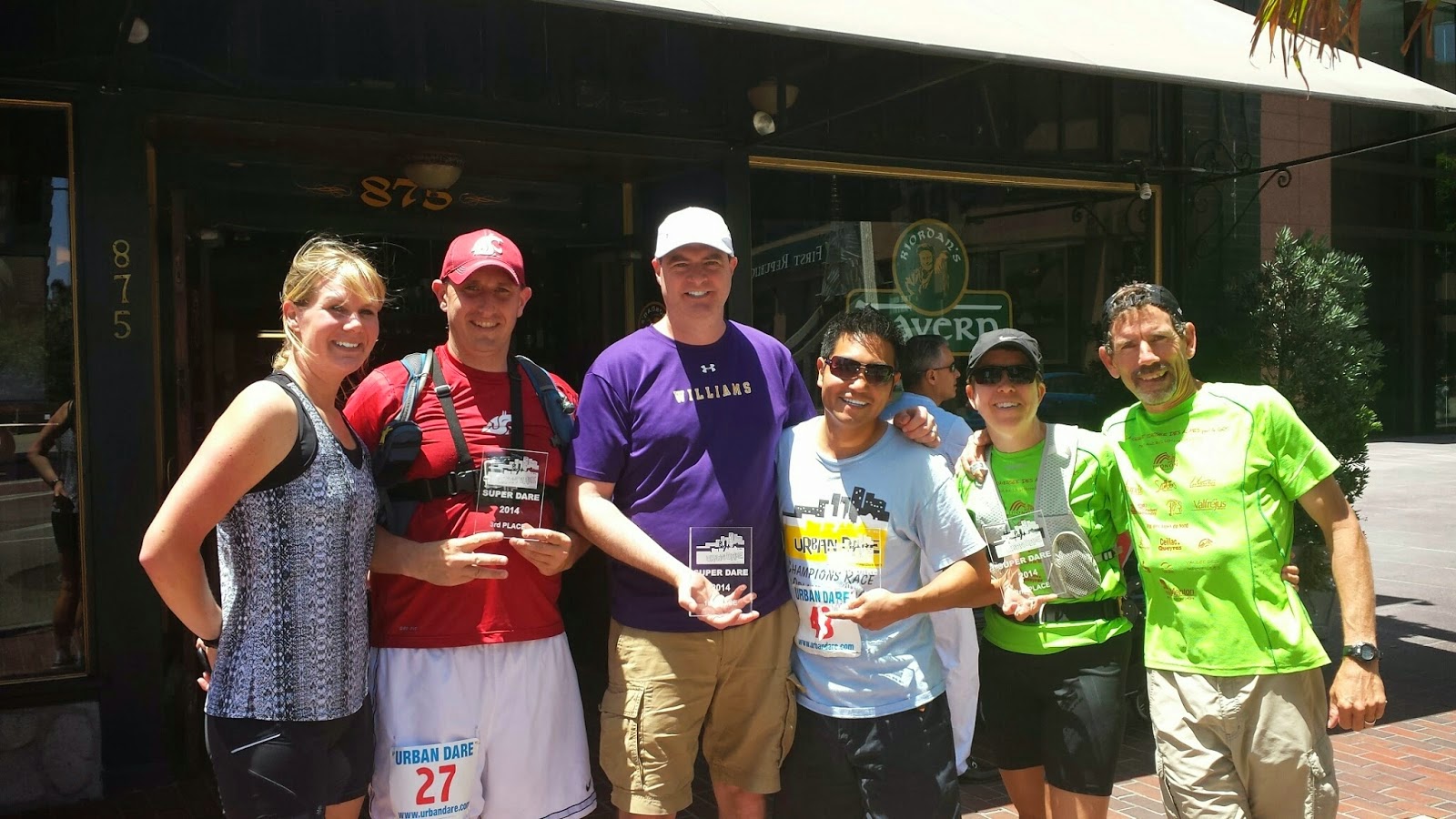 For those of you keeping track, this makes 4 for 4 for 2nd place Super Dare finishes for us.  But it was enough fun that we aren't giving up yet!