Hardrock - Silverton to Cunningham and back

After catching a couple hours of sleep in Silverton, I managed to get on my feet in time to see Killian Jornet crush the previous course record.  He came dancing into Silverton in 22 hours 41 minutes, amazing!!  I was lucky to get to listen to some of the interview questions and watch the media surrounding him: 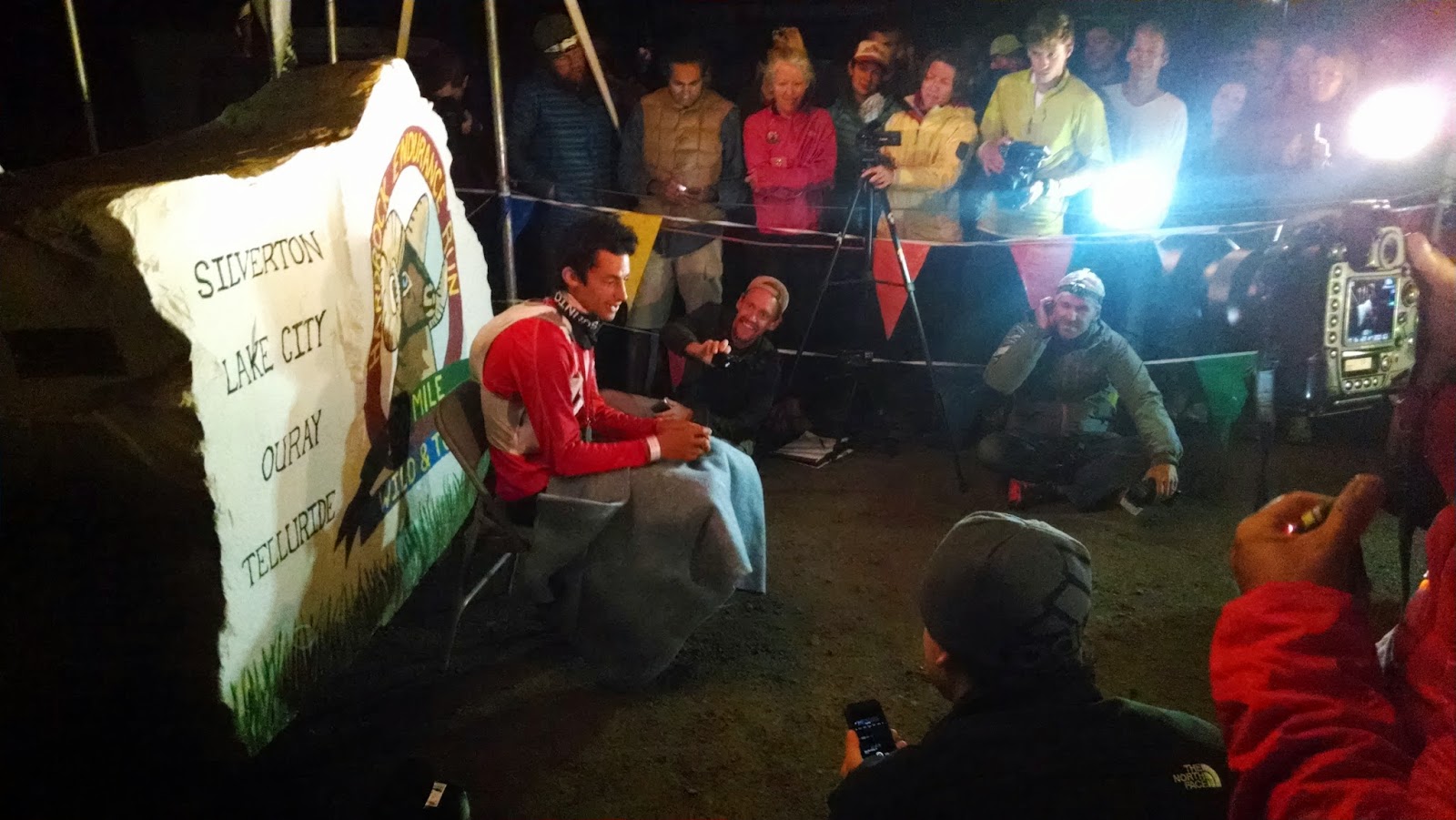 Time to get going up to the Grouse aid station.  Kelly (Ryan's girlfriend) and I got there with only a few minutes to spare before Ryan showed up.  He did great on the hike over Engineer Pass!  That massage in Ouray was a miracle cure.

Putting on sunscreen for day 2: 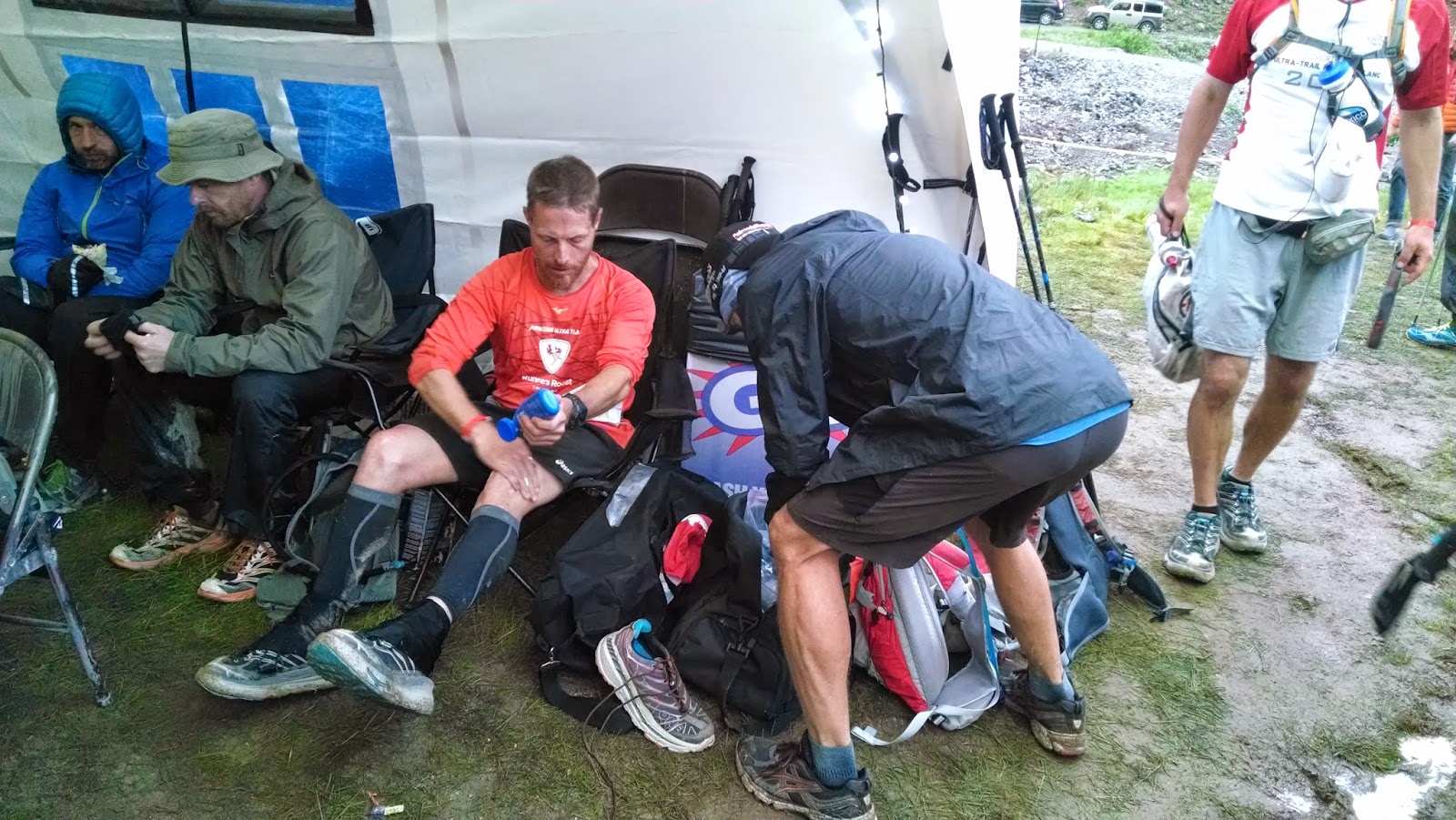 John looks a little loopy after staying up all night.  Happily, Kelly and Ryan look good for the start of the next section of the course, a climb up and over Handies Peak: 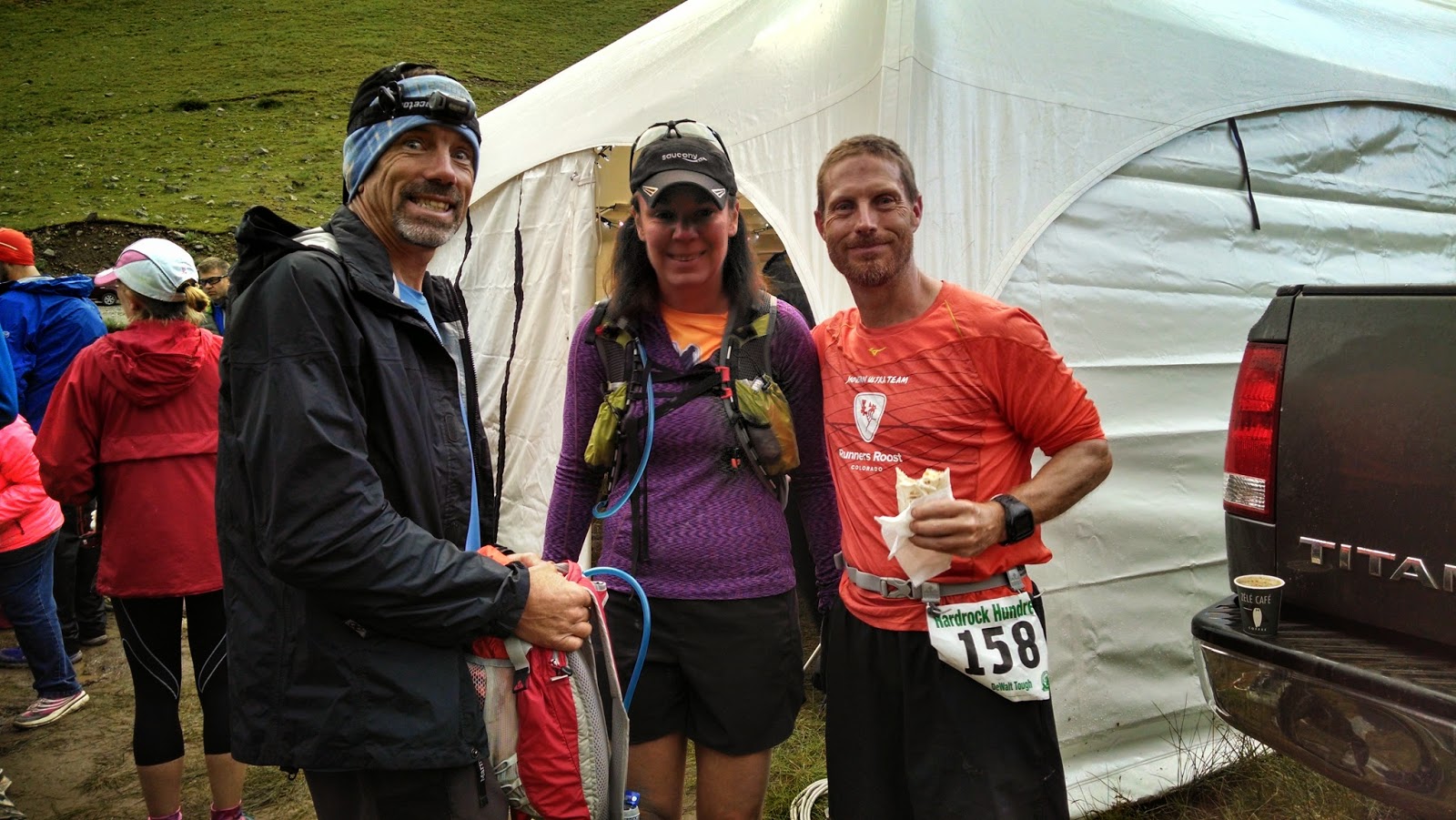 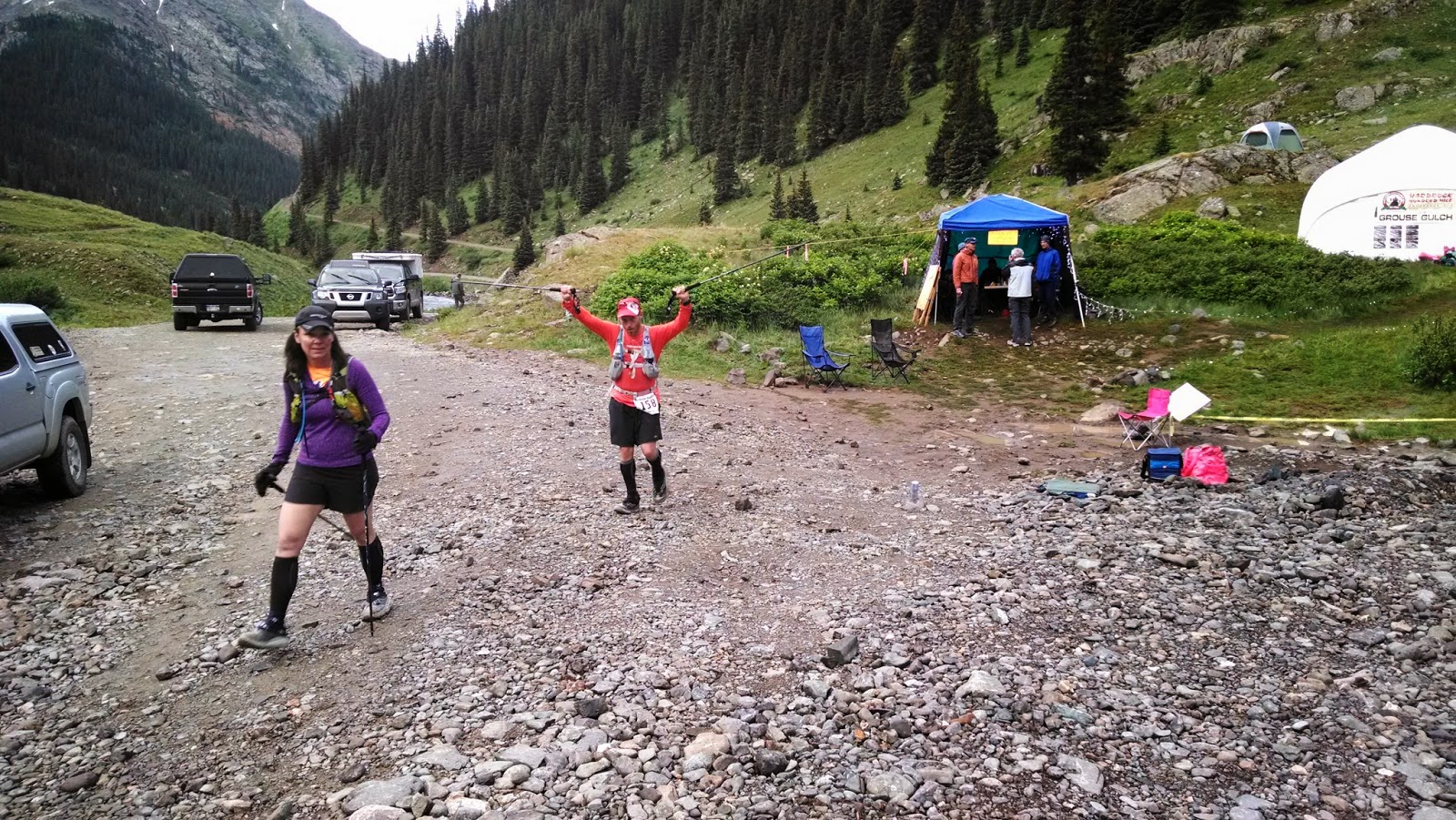 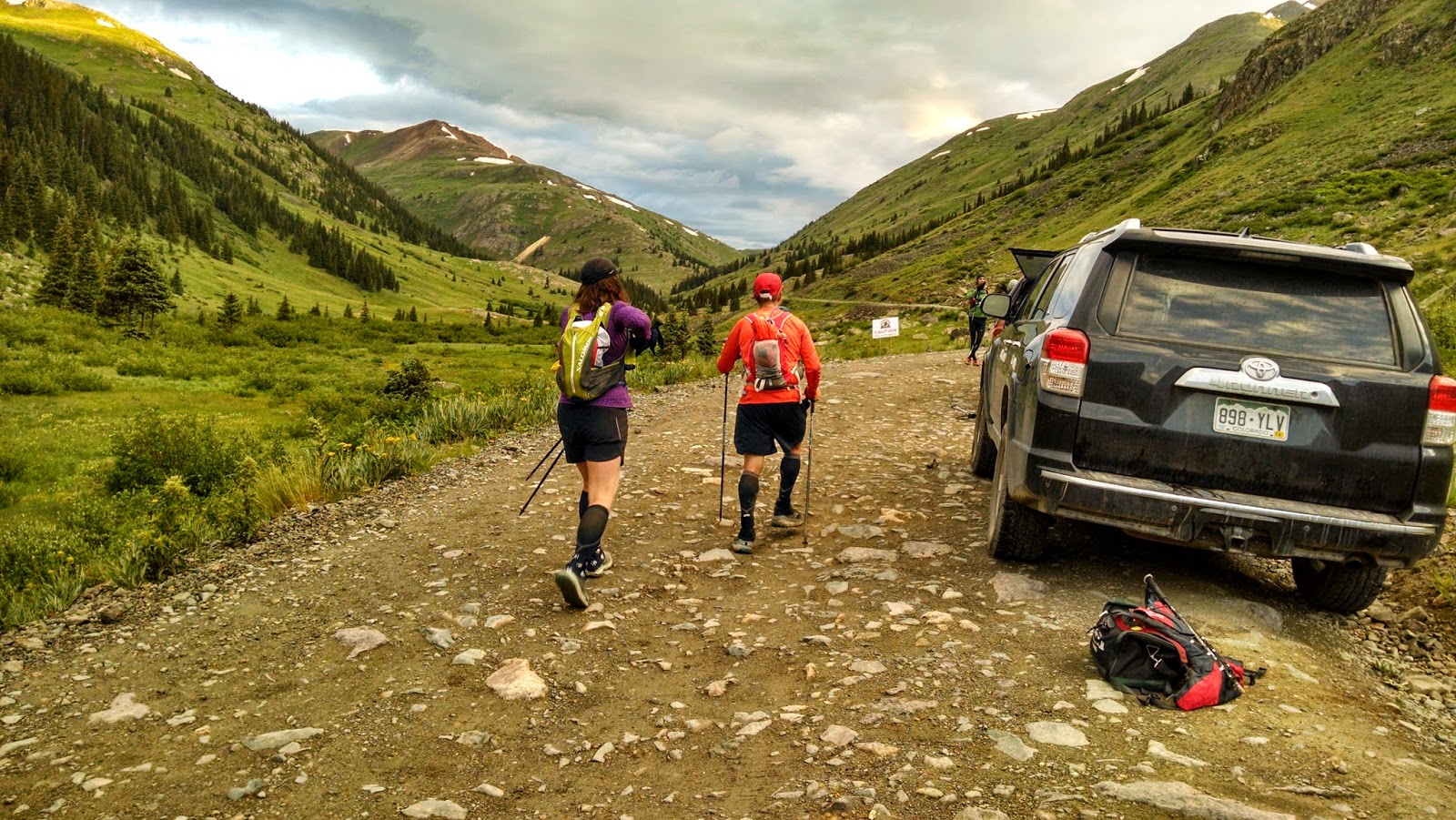 Starting up the trail... we wouldn't see them again until dark: 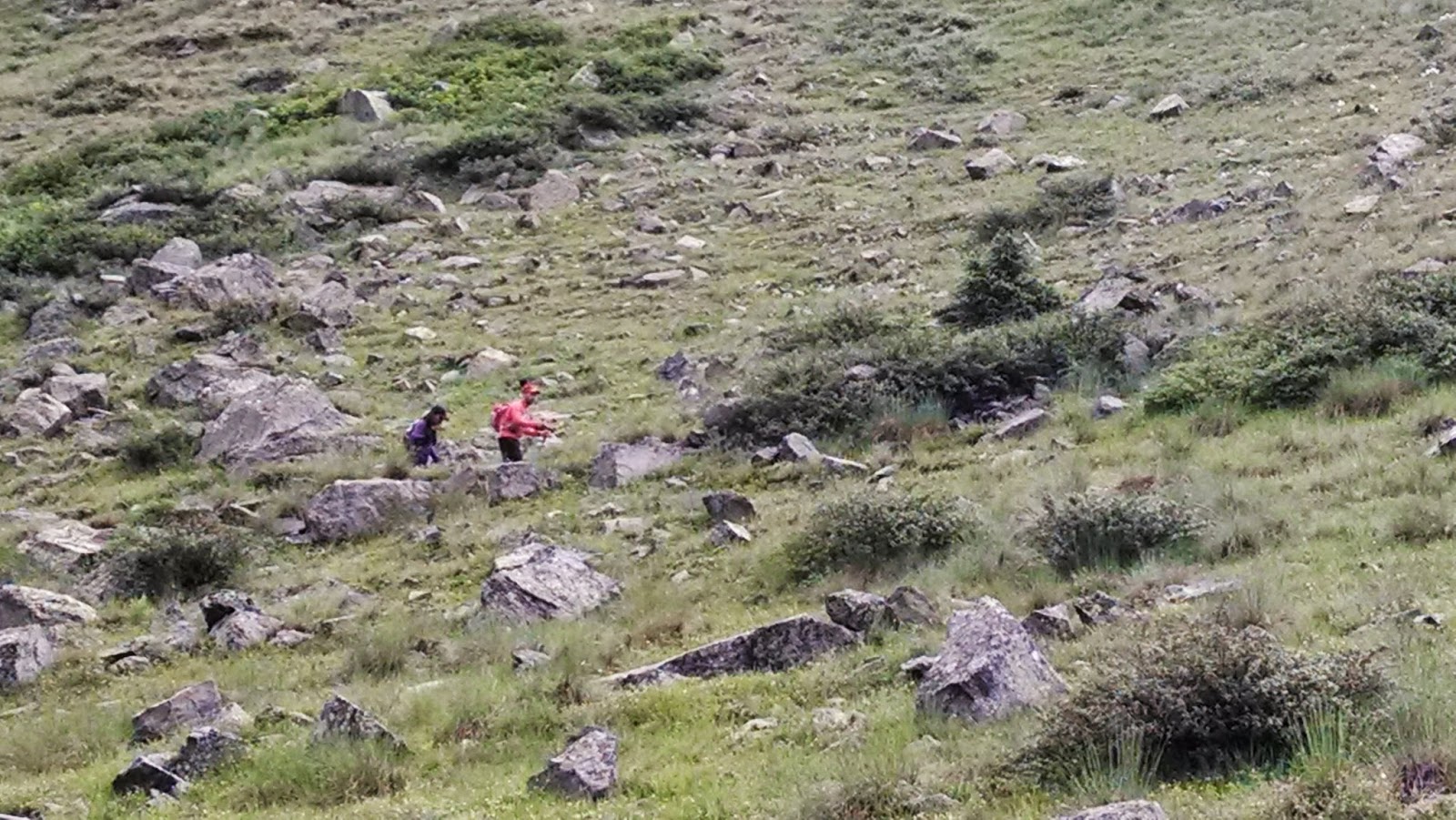 Back in town, we caught Ted coming to the finish, yay Ted! 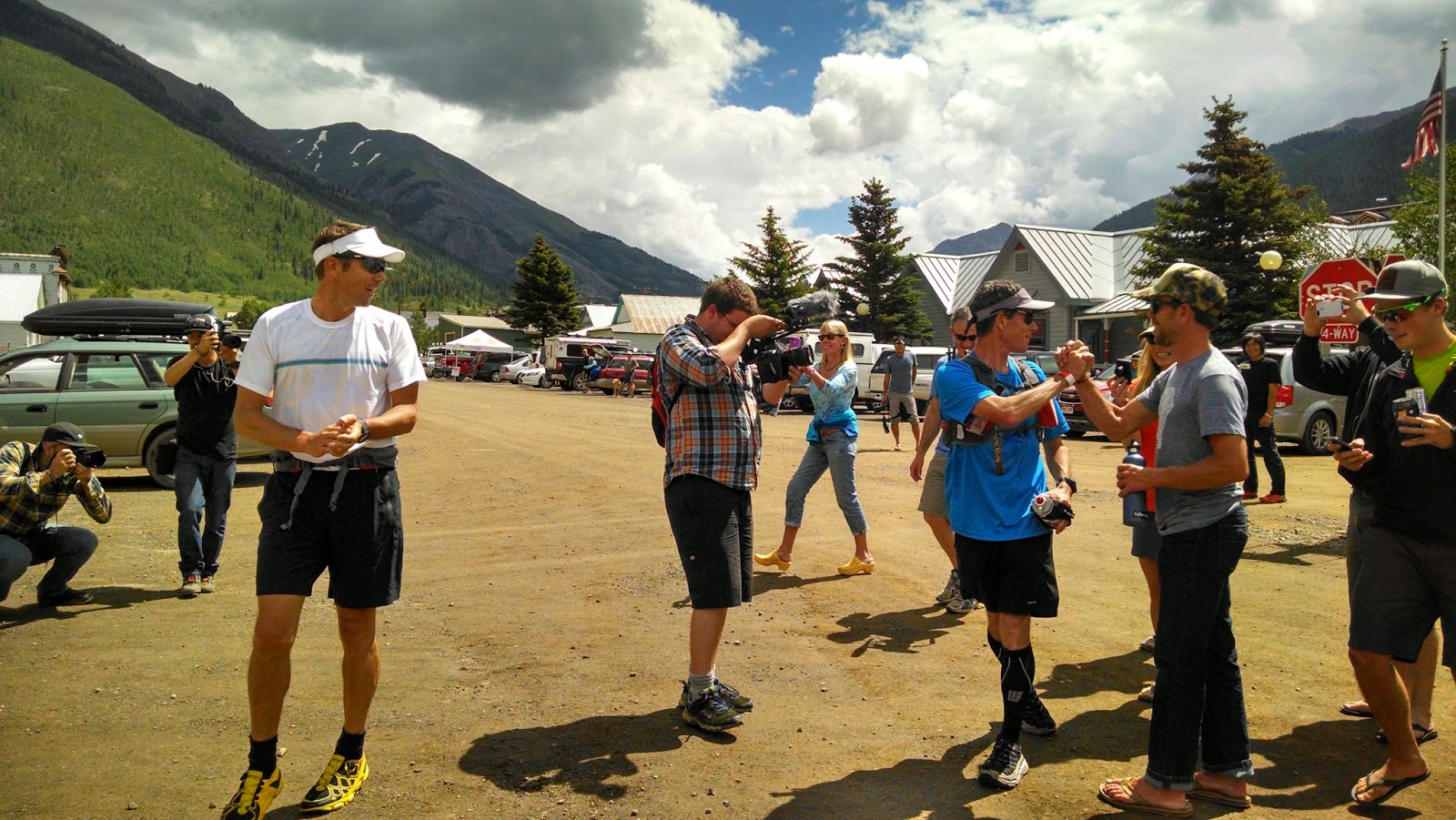 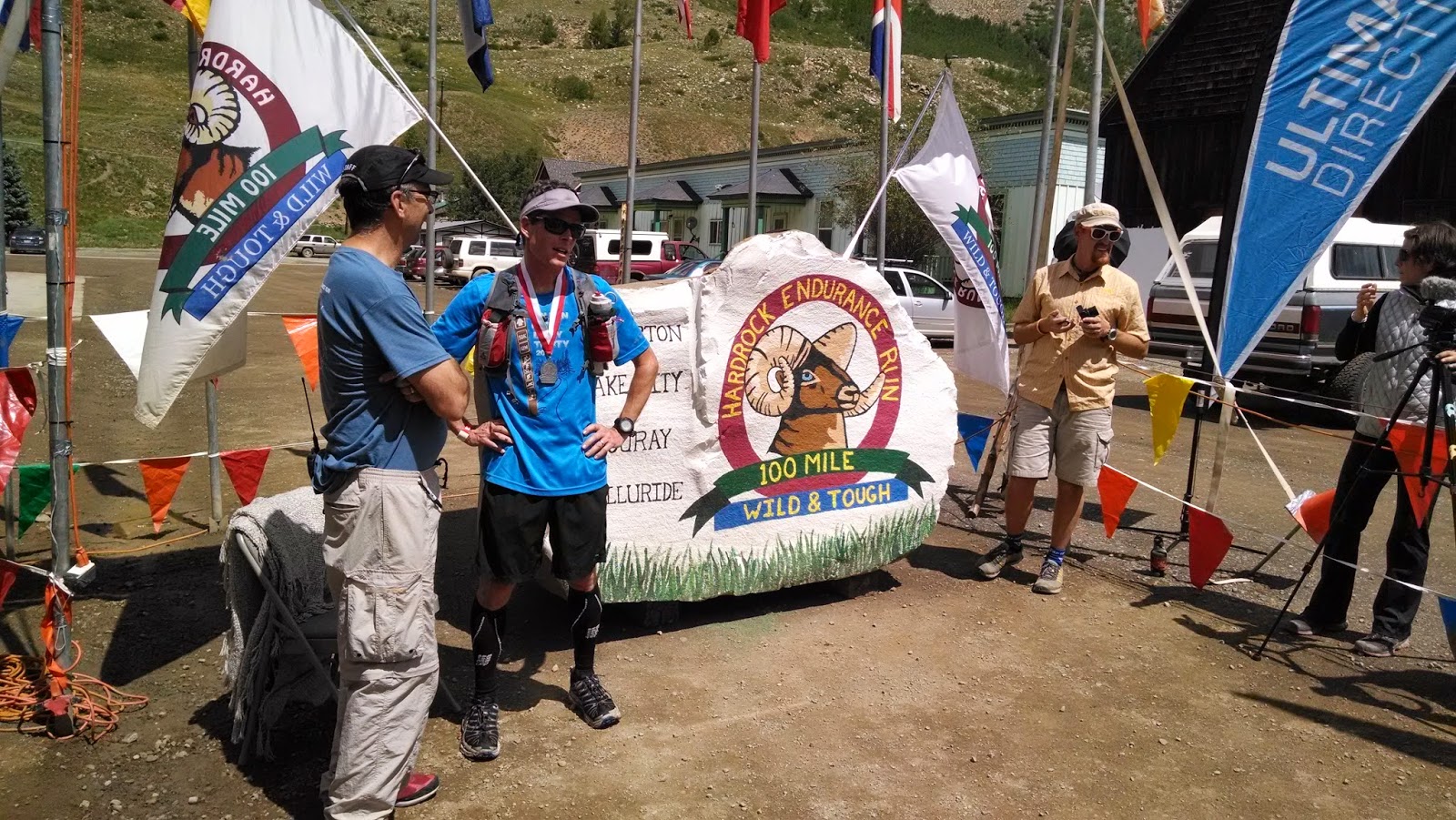 Darcy coming in for the win on the women's side: 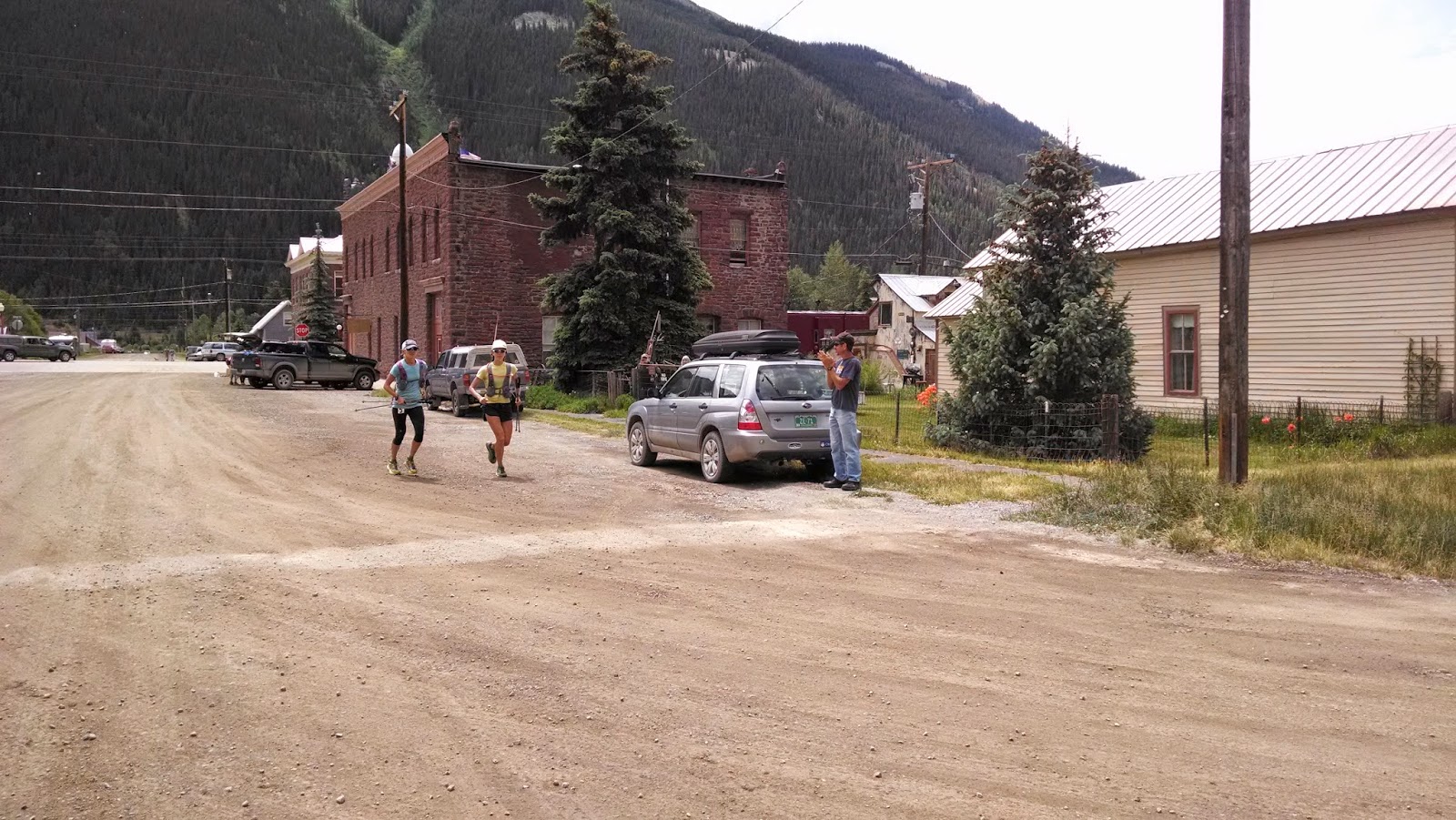 I started up a hike along the course backward from the finish, following it over Dives-Little Giant pass to the final aid station (Cunningham).  It was an afternoon of beautiful scenery: 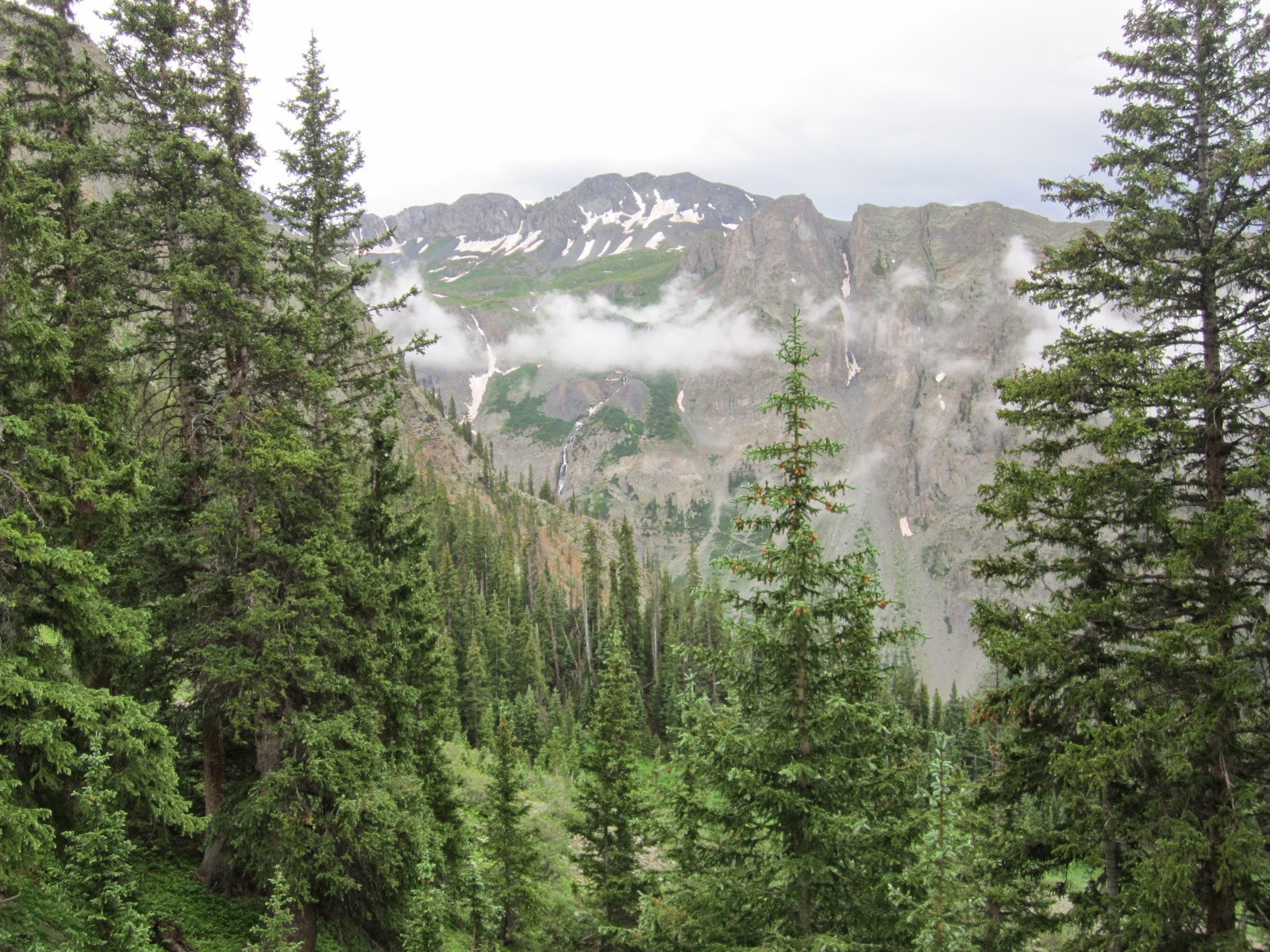 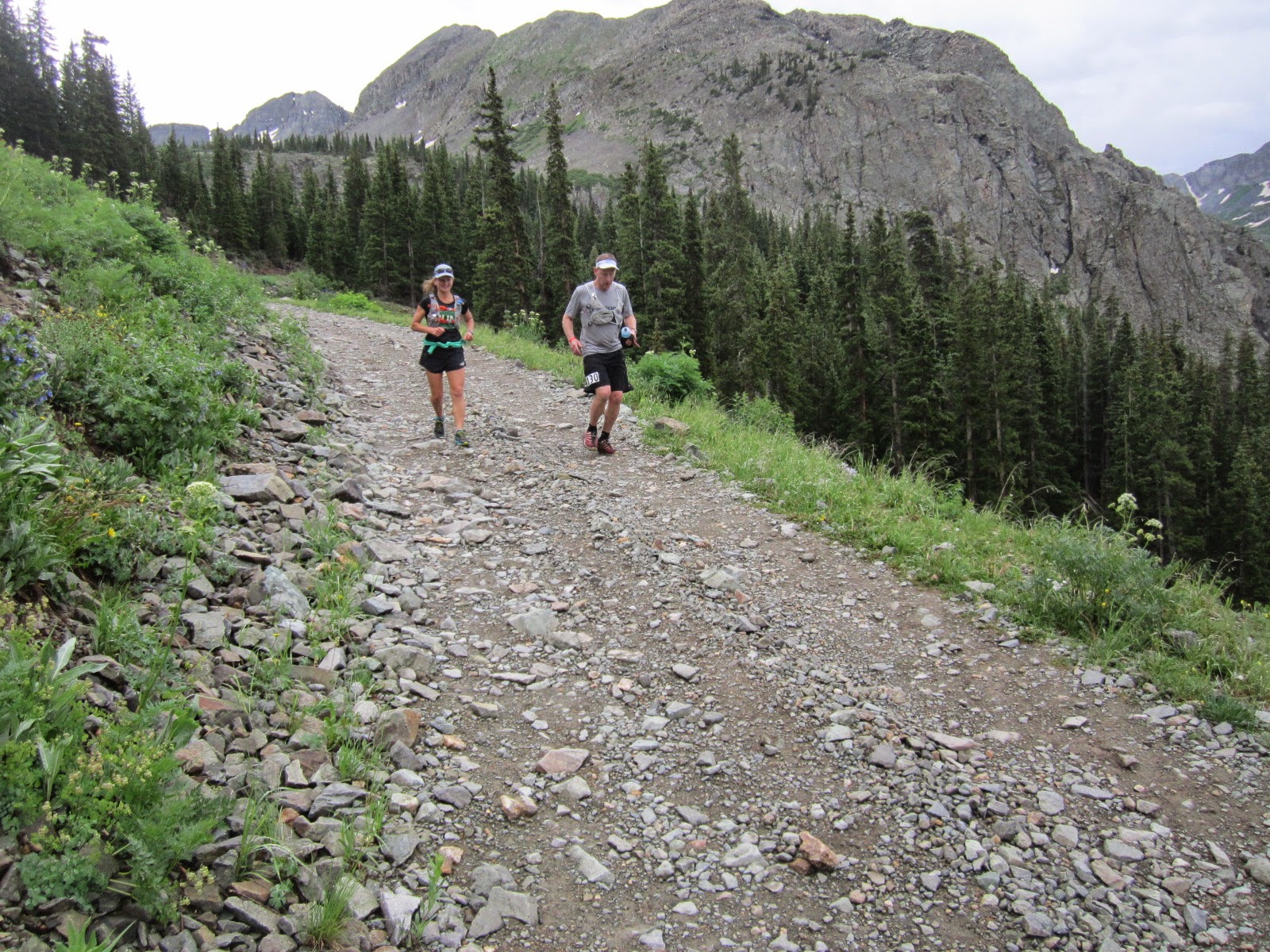 I enjoyed taking pictures all the way up and over the pass: 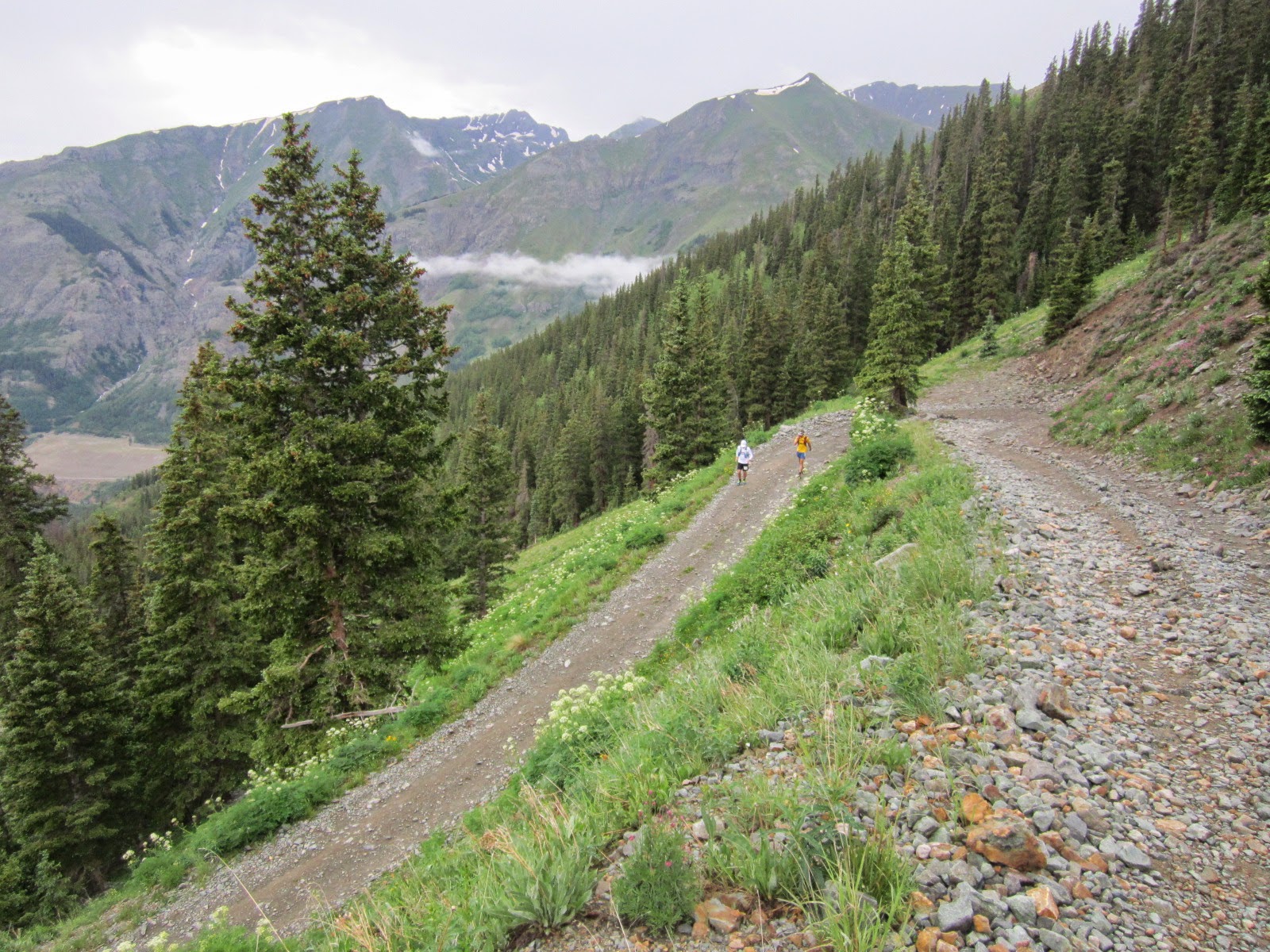 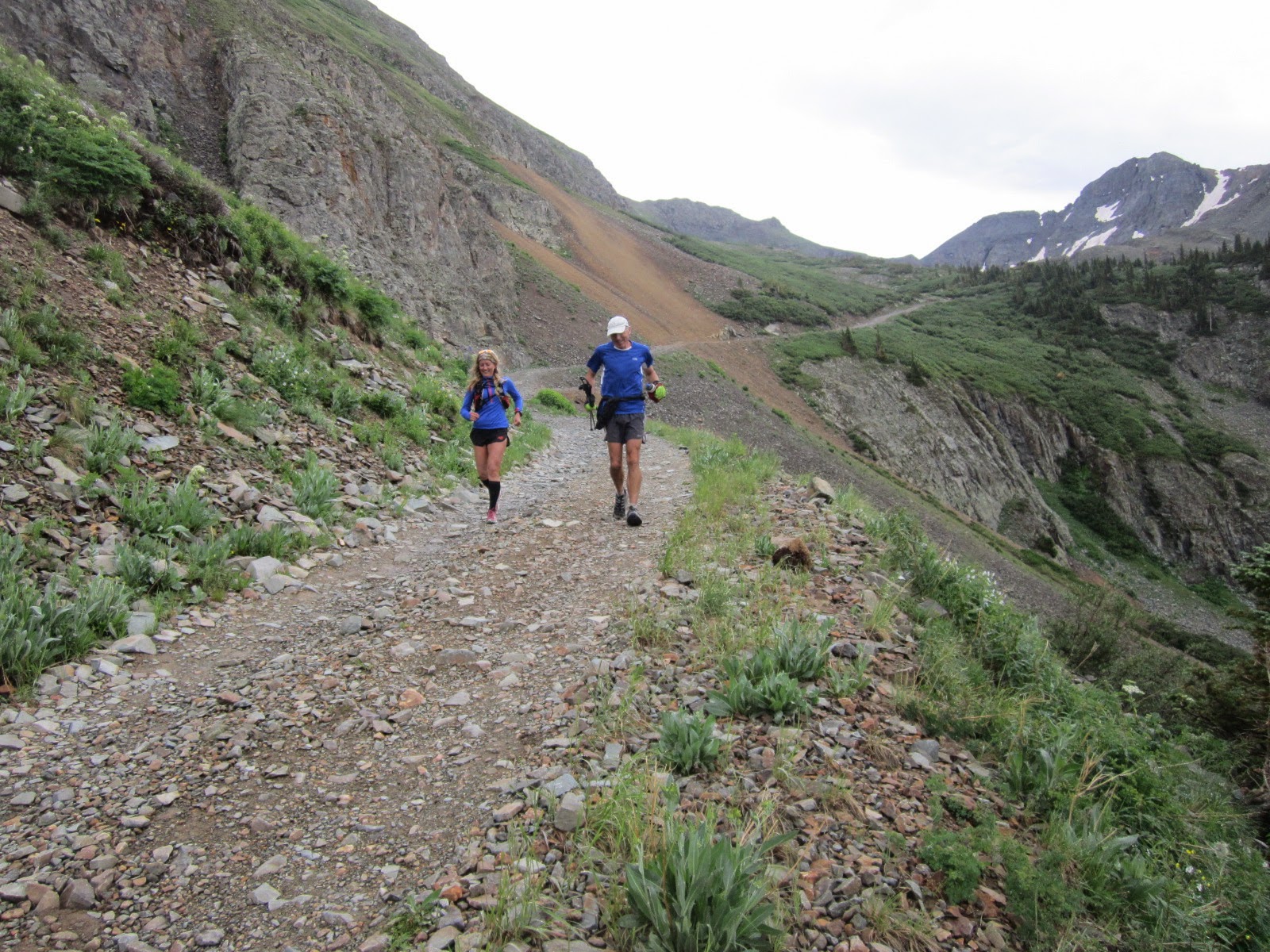 It's John Sharp!  Doing great John!  Getting some help from his pacer, Gina, with getting rocks out of his shoes: 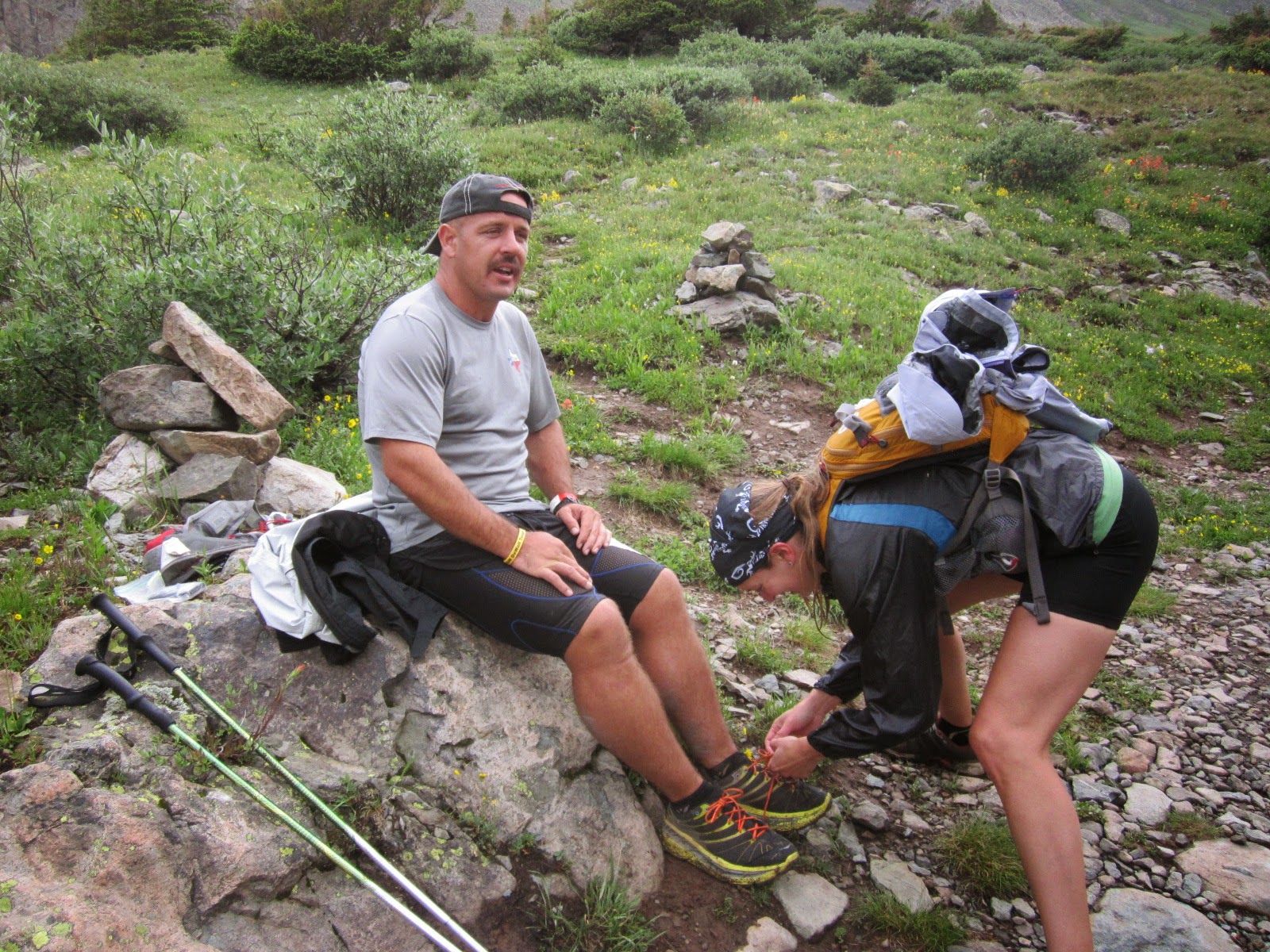 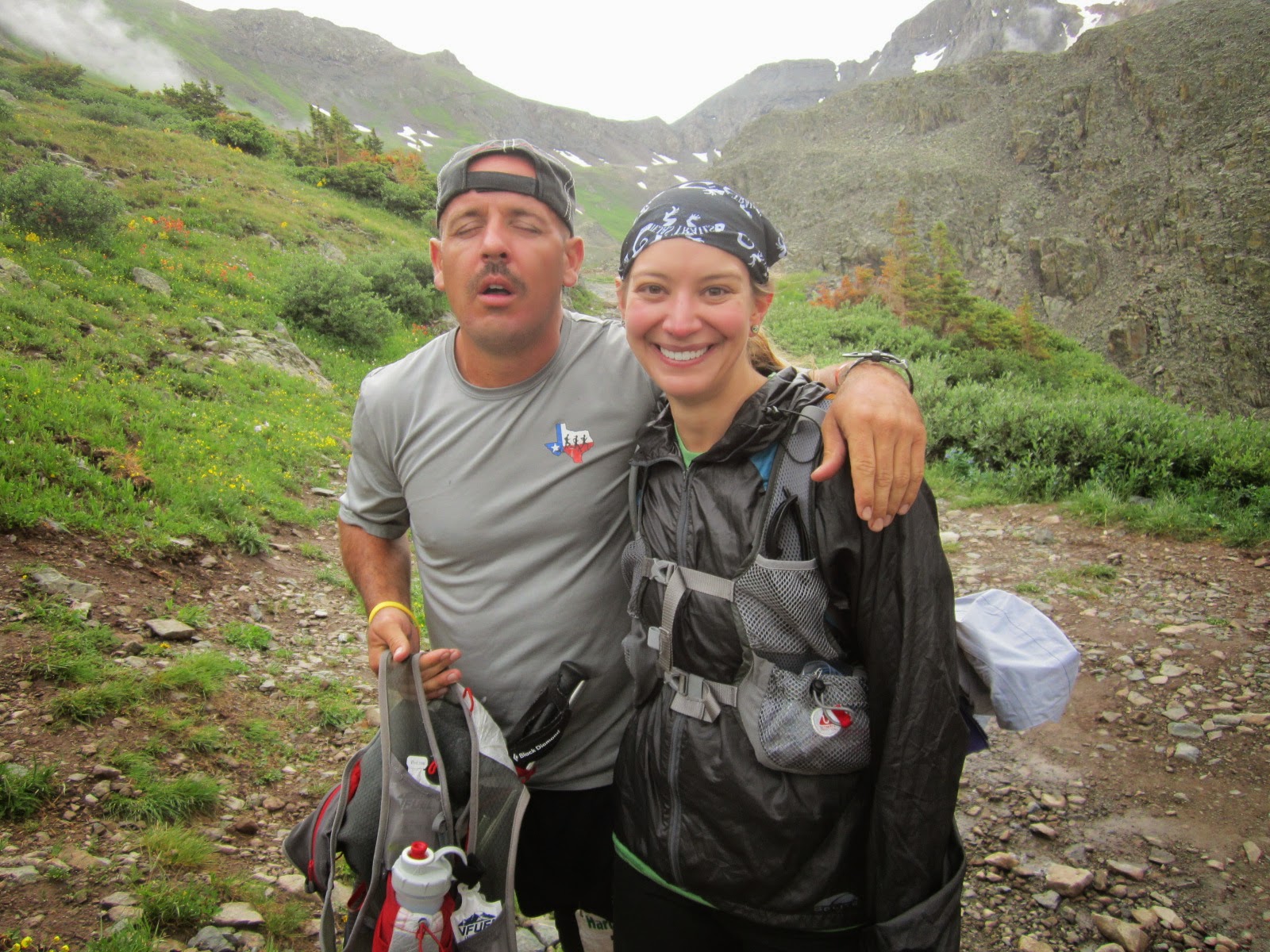 Pretty lake on the way to the pass: 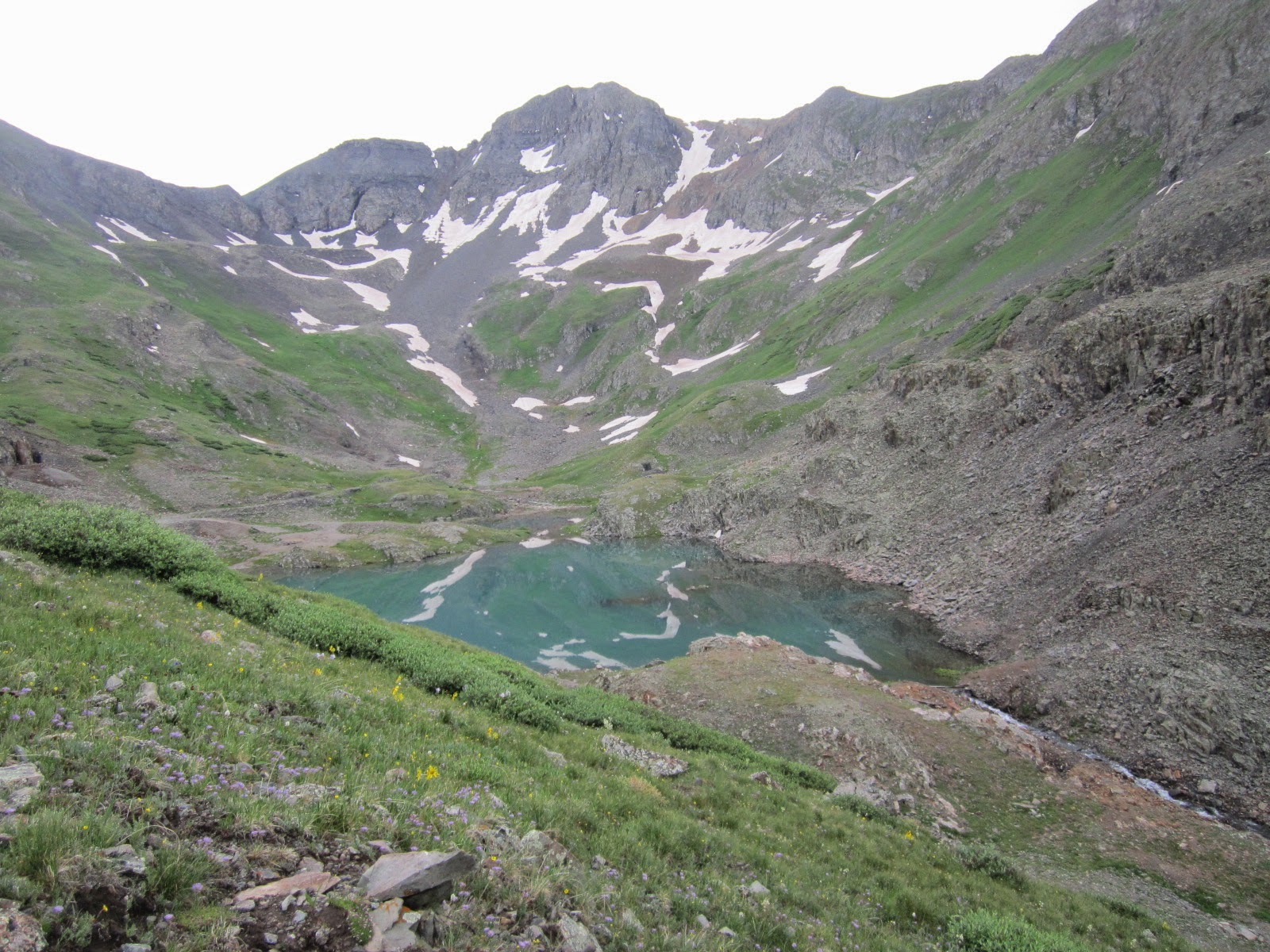 A cairn and columbines: 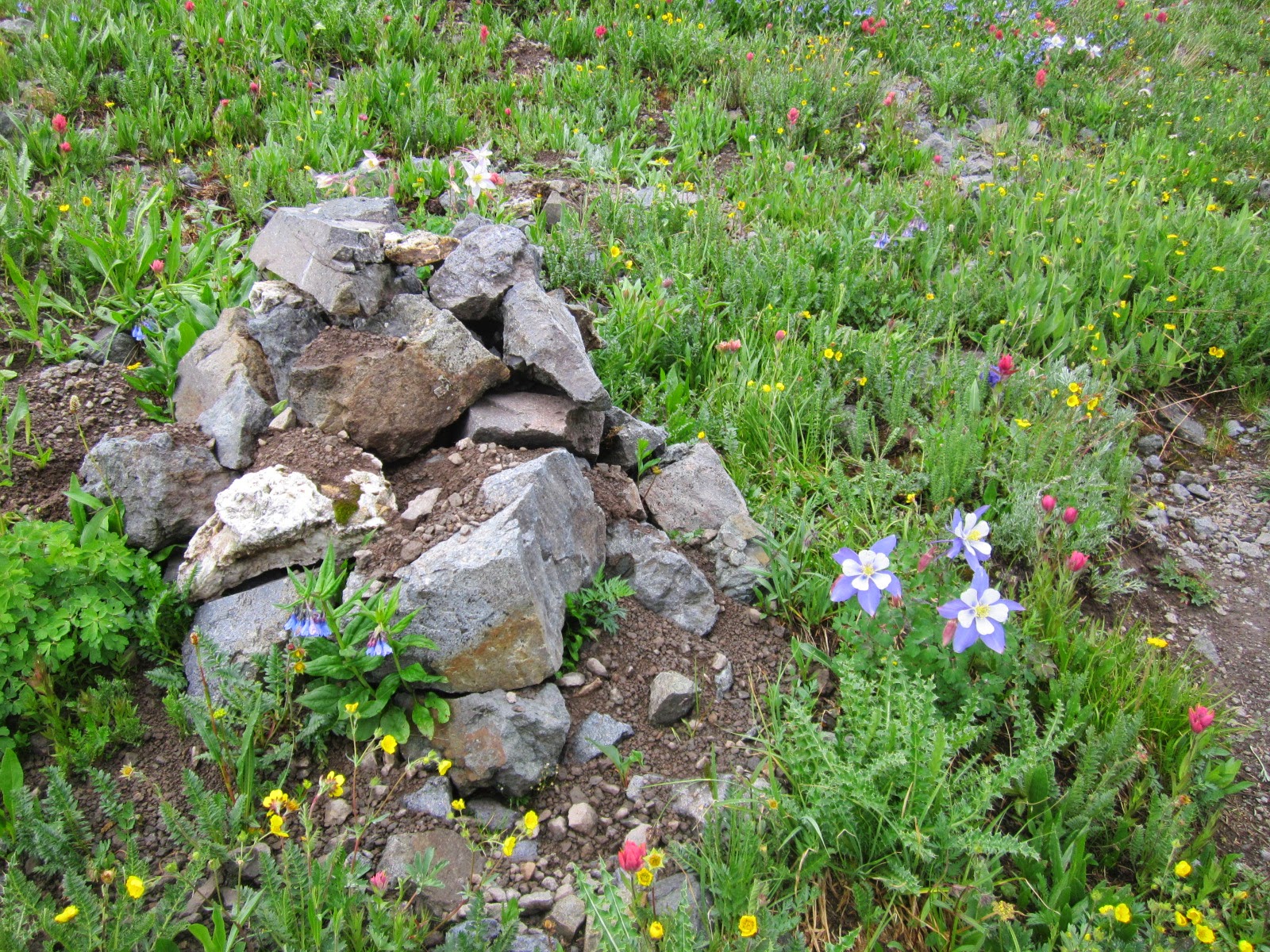 A cloud briefly rolling through... 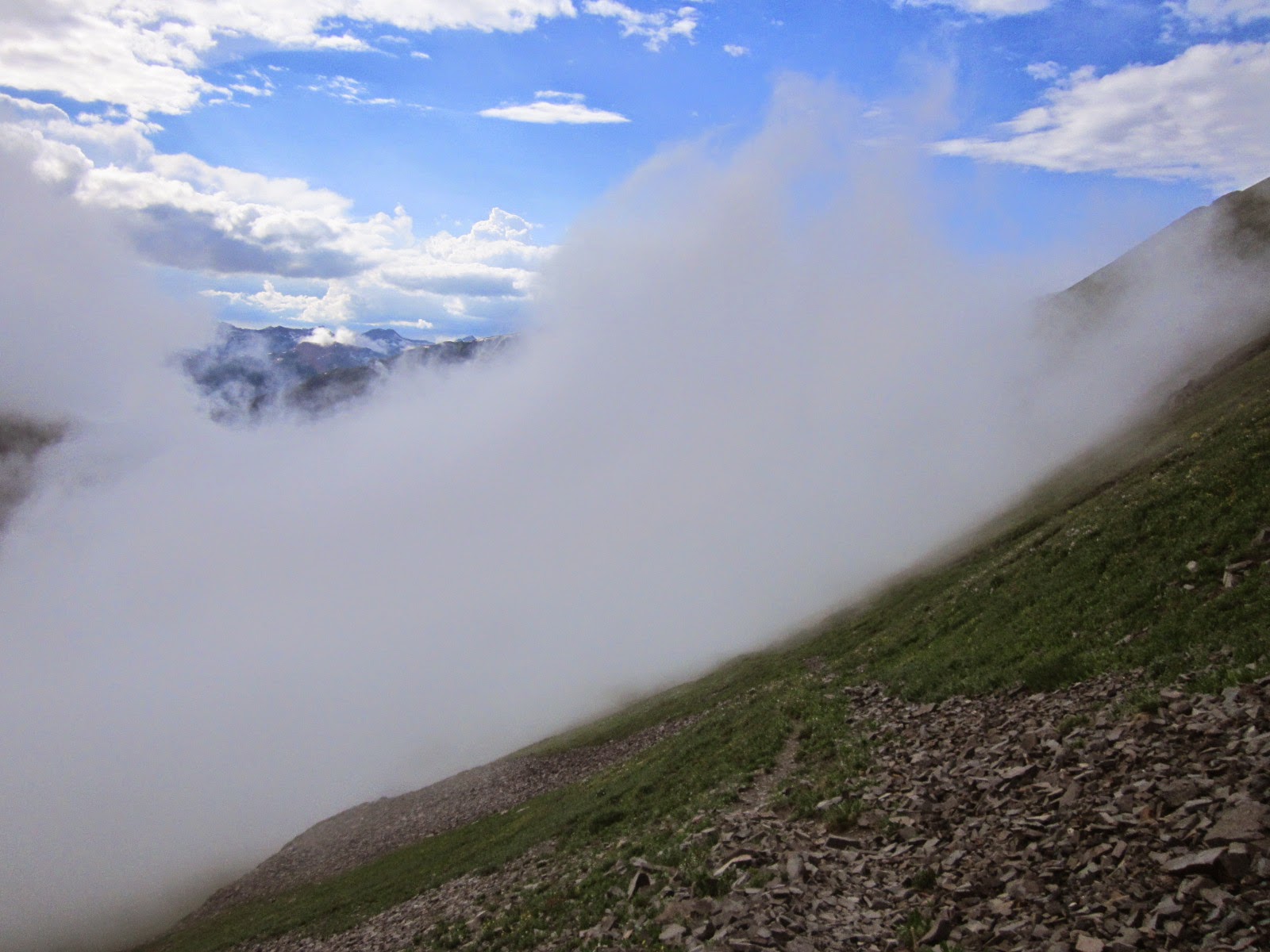 The last challenging descent for the runners: 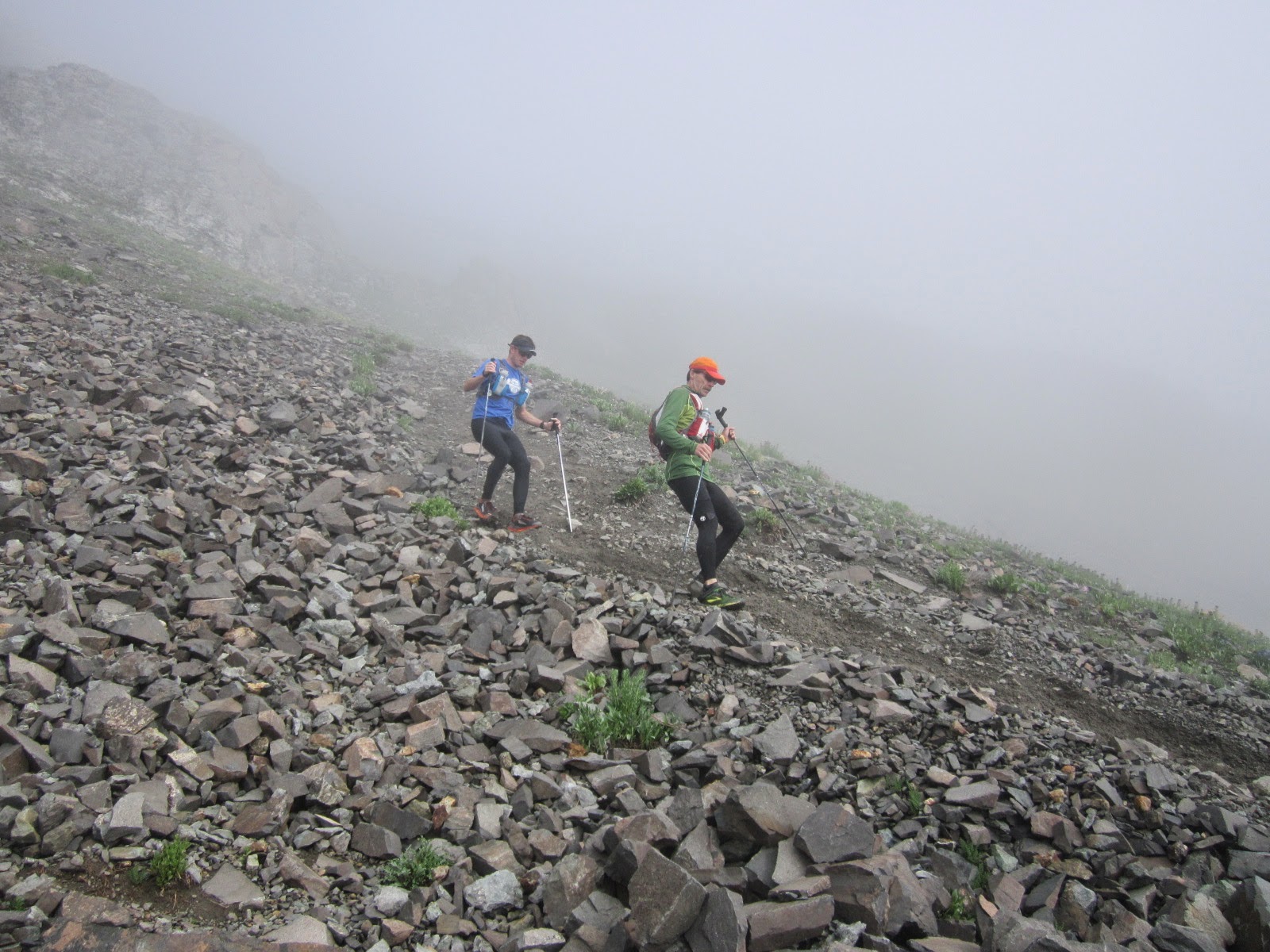 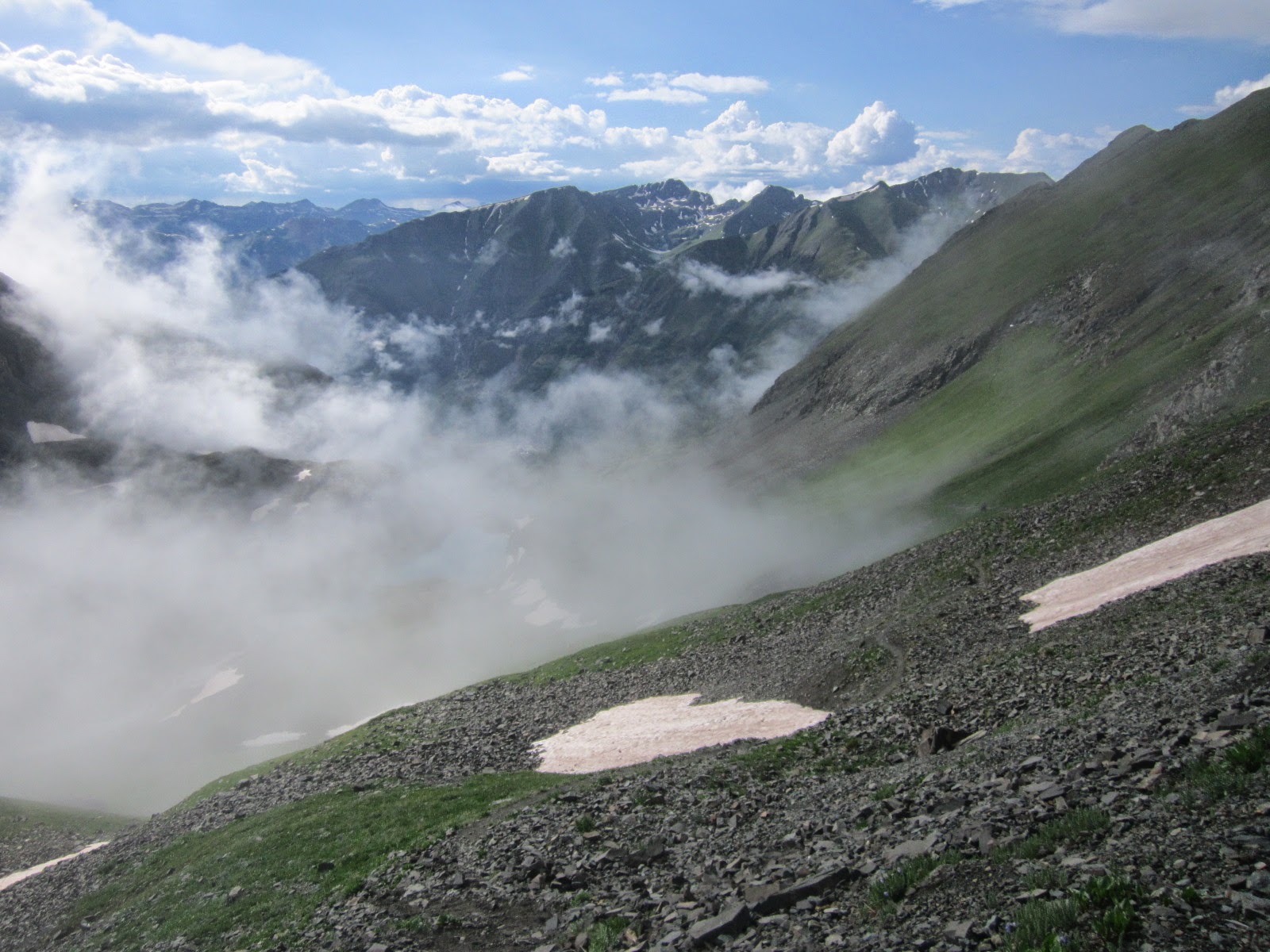 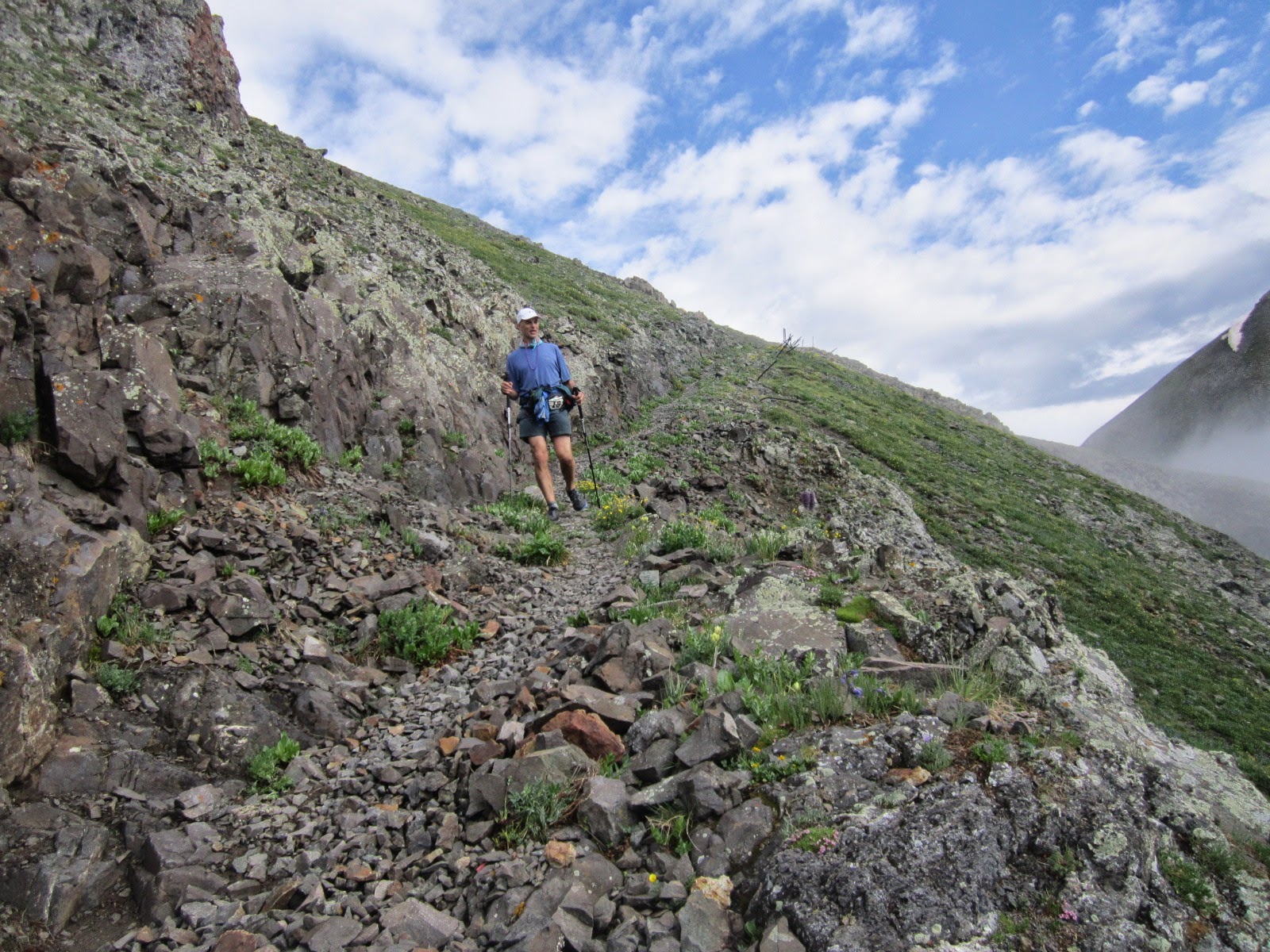 The other side of the pass: 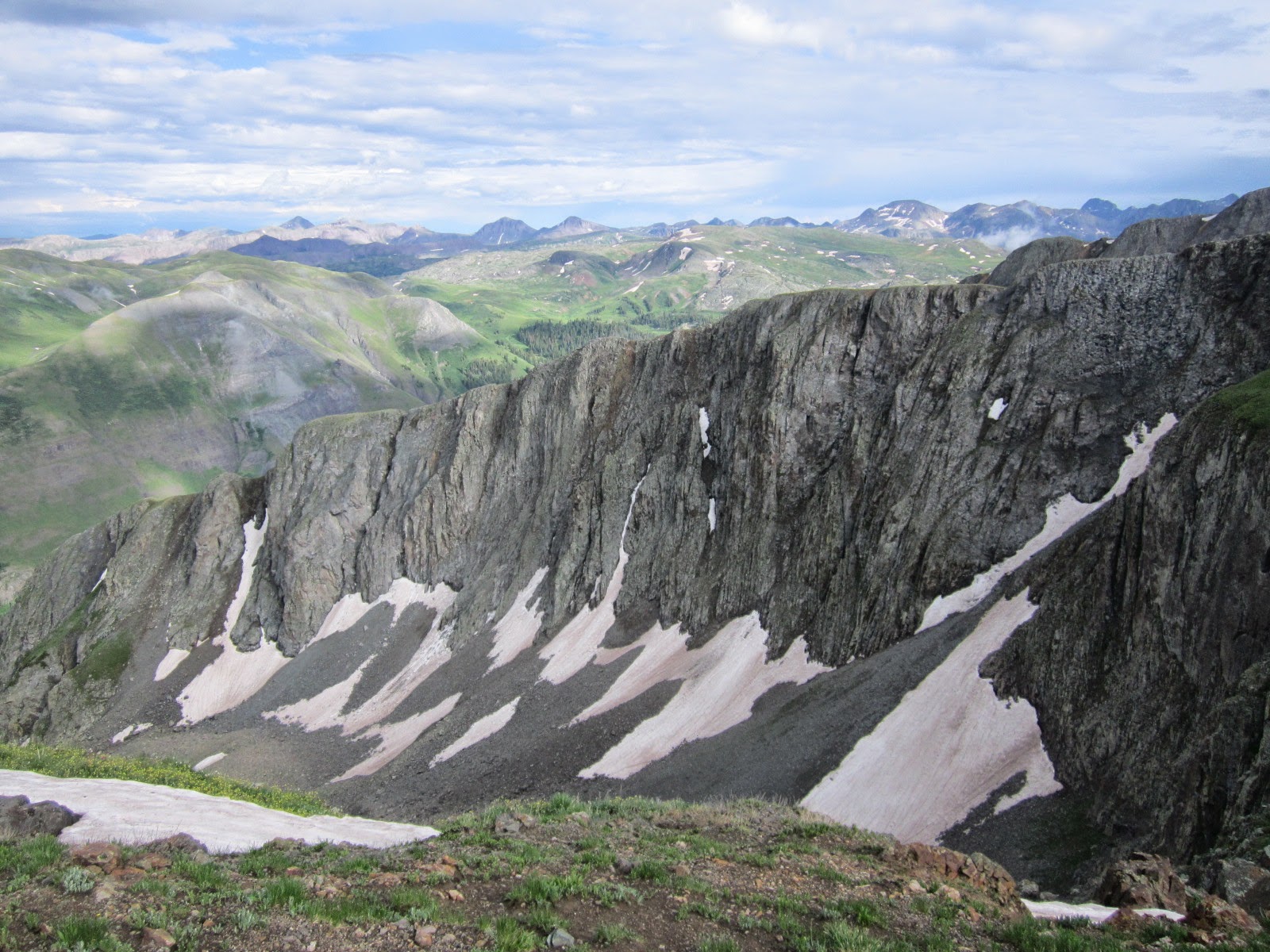 Runners just about the finish the last climb: 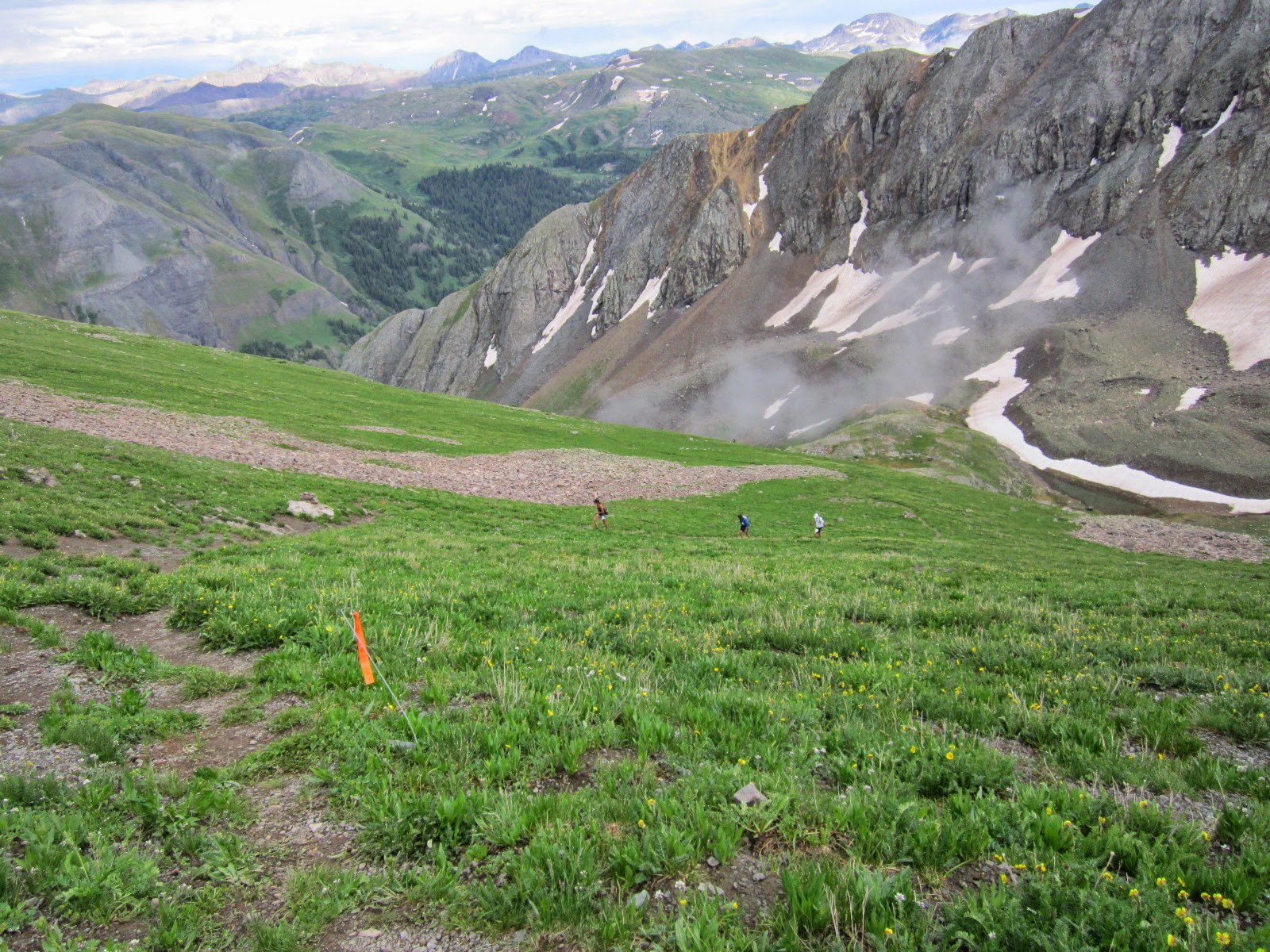 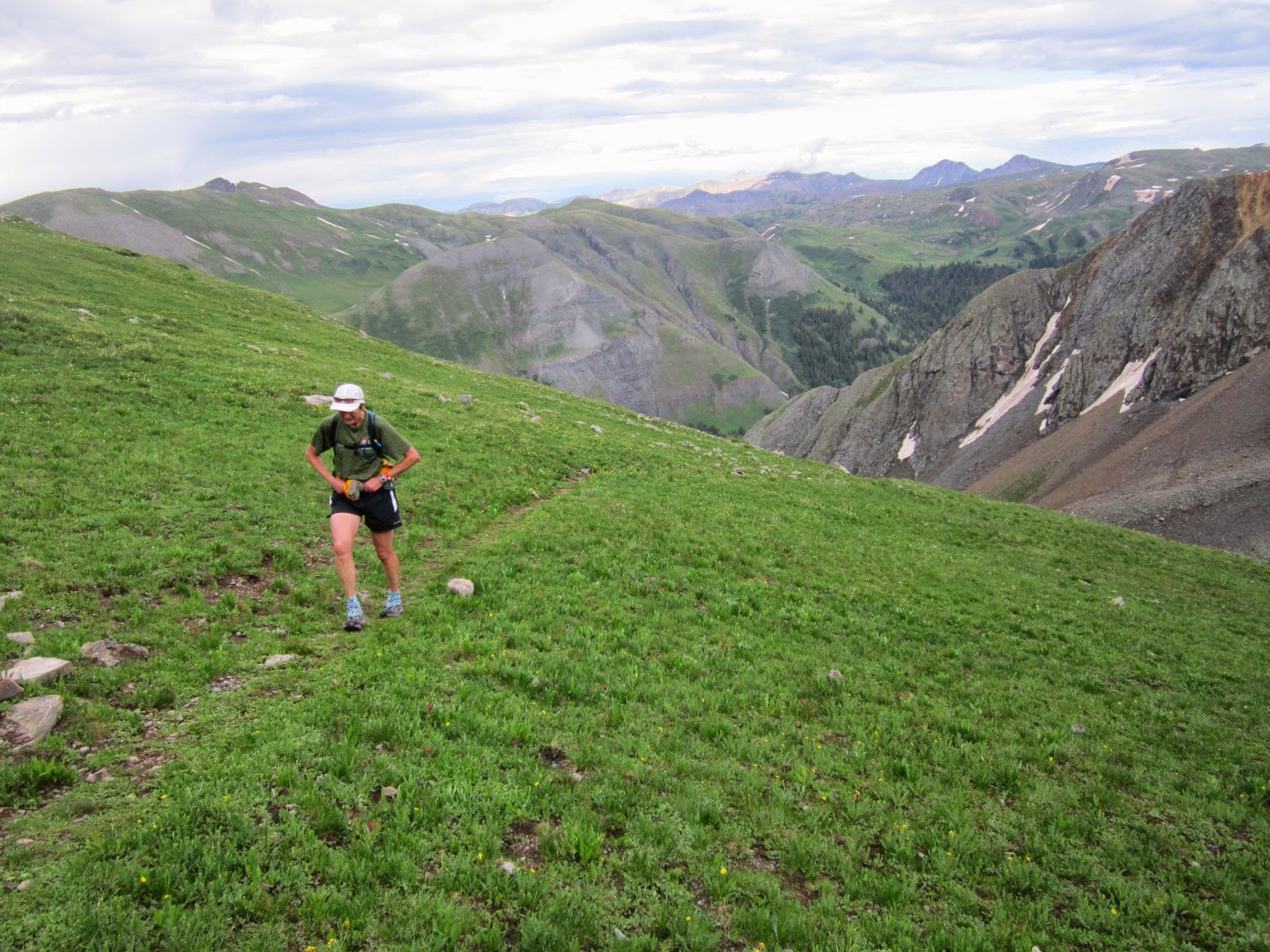 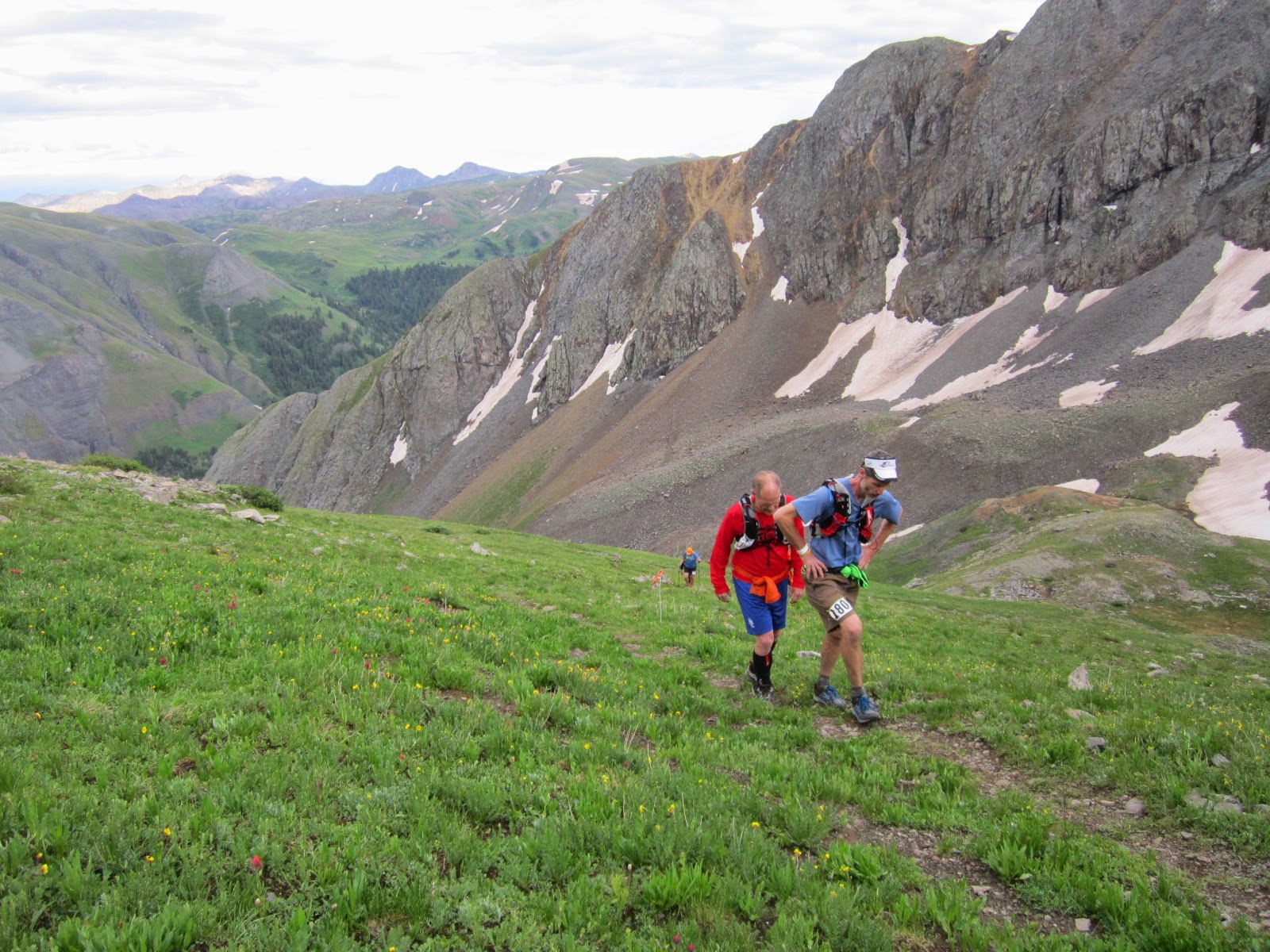 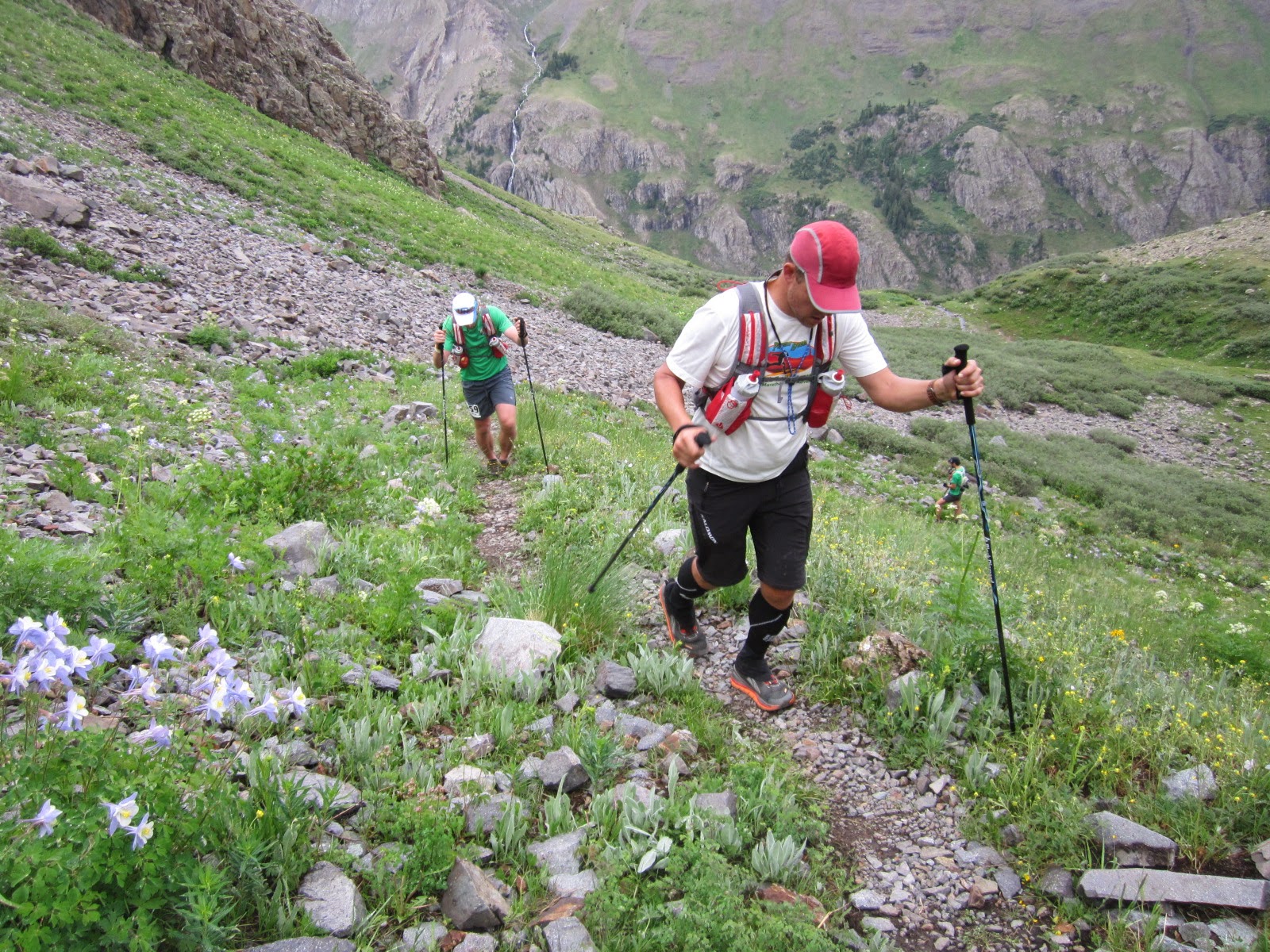 Watching our friend Jeff climbing up from Cunningham: 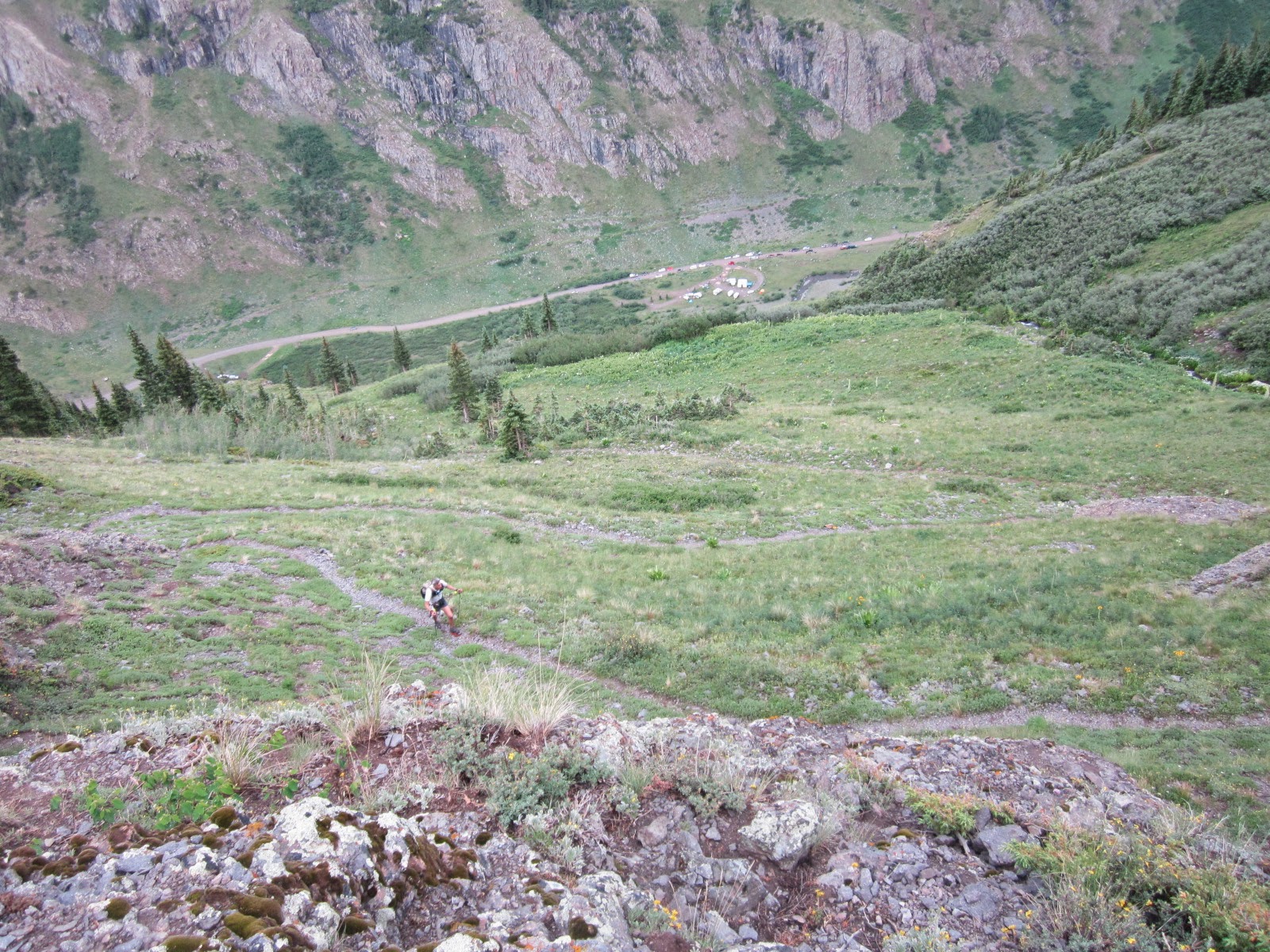 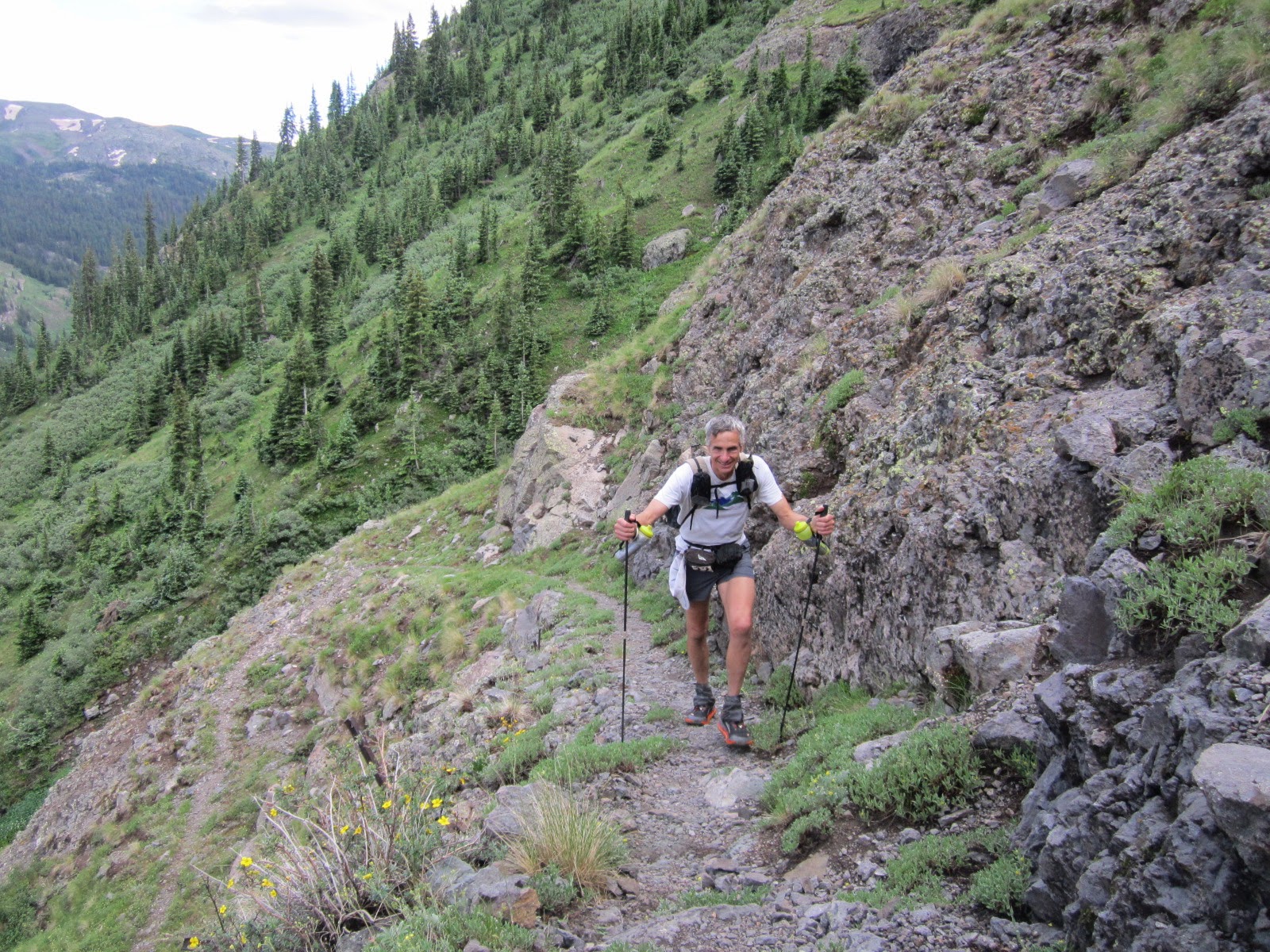 I headed down to the aid station and took a nap while John watched for Ryan and Kelly.  John woke me up when they arrived and I got ready to pace Ryan on the final section of the course.  Ryan was still climbing well, so we made it to the top with no issue.  Ryan told me he was seeing things that weren't actually there, and he was happy to tell me about them (always entertaining).  Rolls of toilet paper, a dumpster, a big fish, a longhorn, some trash, a polka-dot purse.  My favorite was when he walked up to a cairn and stood staring at it.  I asked what he saw, and his reply was, "A pile of rocks."

The downhill trail was tricky, especially because Ryan's feet were hurting.  They hurt worse when he kicked rocks, so he was trying to avoid that but it was difficult.  We took it slow down the upper section.  Once we found the road he picked up the pace and we made good time down to the creek crossing.  One last long, long trail to go!  Finally we popped out at the ski area, made short work of the roads through town, and reached the Hardrock rock: 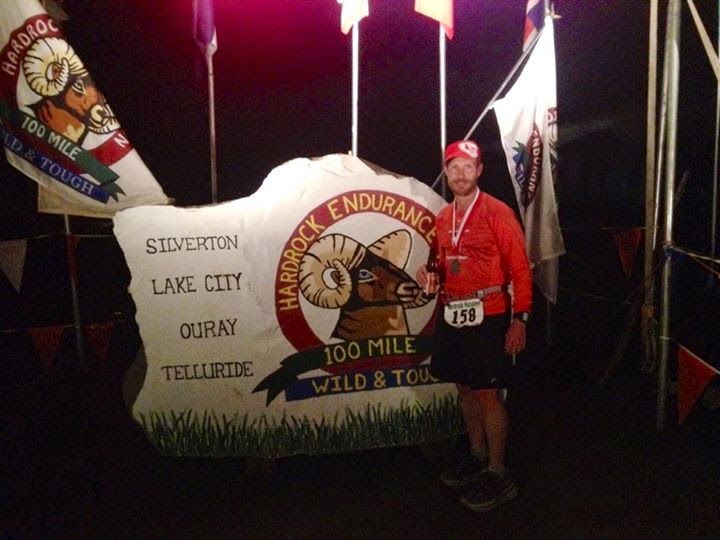 Congratulations Ryan and all Hardrock finishers!  You are inspirational!