The final Great Urban Race championships and last GUR race ever.  It has been a fun bunch of races over the past years, we will greatly miss them!

We came to Vancouver to experience as much "GUR" as possible, with the main goal of making it to the finals.  I've been nursing a gimpy knee, staying off it lately in hopes that it wouldn't slow us down too much during our run around the streets.  Technology was another challenge, paying extra $ for international phone and data service, but at least we had a whole lot more to work with compared to the Bahamas Super Dare race a few years ago.  No complaints.  Especially when we didn't have to do any social media uploads during the race, thank you for that.

Time to run around beautiful Vancouver!  We recognized a couple addresses to the south of False Creek and ran to the closest bus stop.  No bus in sight, so after a short while we decided to jump to a different street and test our luck there.  It was good!  Almost too good - John hauled butt across a park to jump on board.  I watched the bus doors close as I huffed my way toward it, hoping John could sweet-talk the driver into waiting for me.  Happily he did, and I didn't lose my racing partner in the first 5 minutes of the race.

On the bus, yay!  We passed Team Nads as the bus crossed the Granville Bridge, so it looked like an initial bus gamble had paid off.  We might have been the first team to arrive at the Reckless bike shop, where I spun a bike wheel and John worked on flicking a playing card through the spokes.  The hardest part seemed to be getting any distance on the card, but John got the hang of it soon enough. 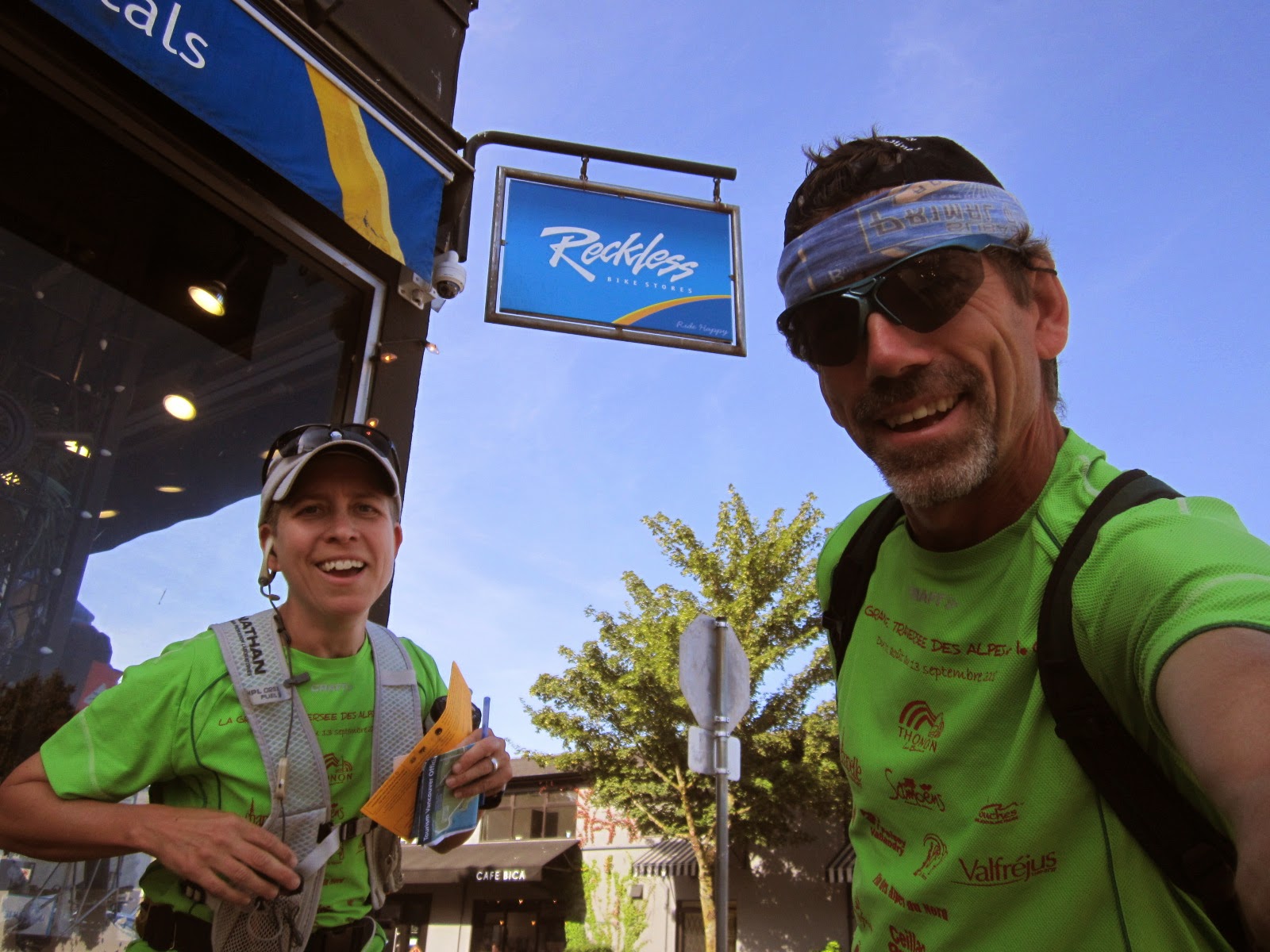 Around the corner to a grape stomping place (I think?) where John stripped off a shoe and moved some corks from one bucket to another with his toes (hope they don't reuse the corks).  He's pretty good with his toes and knocked this one out. 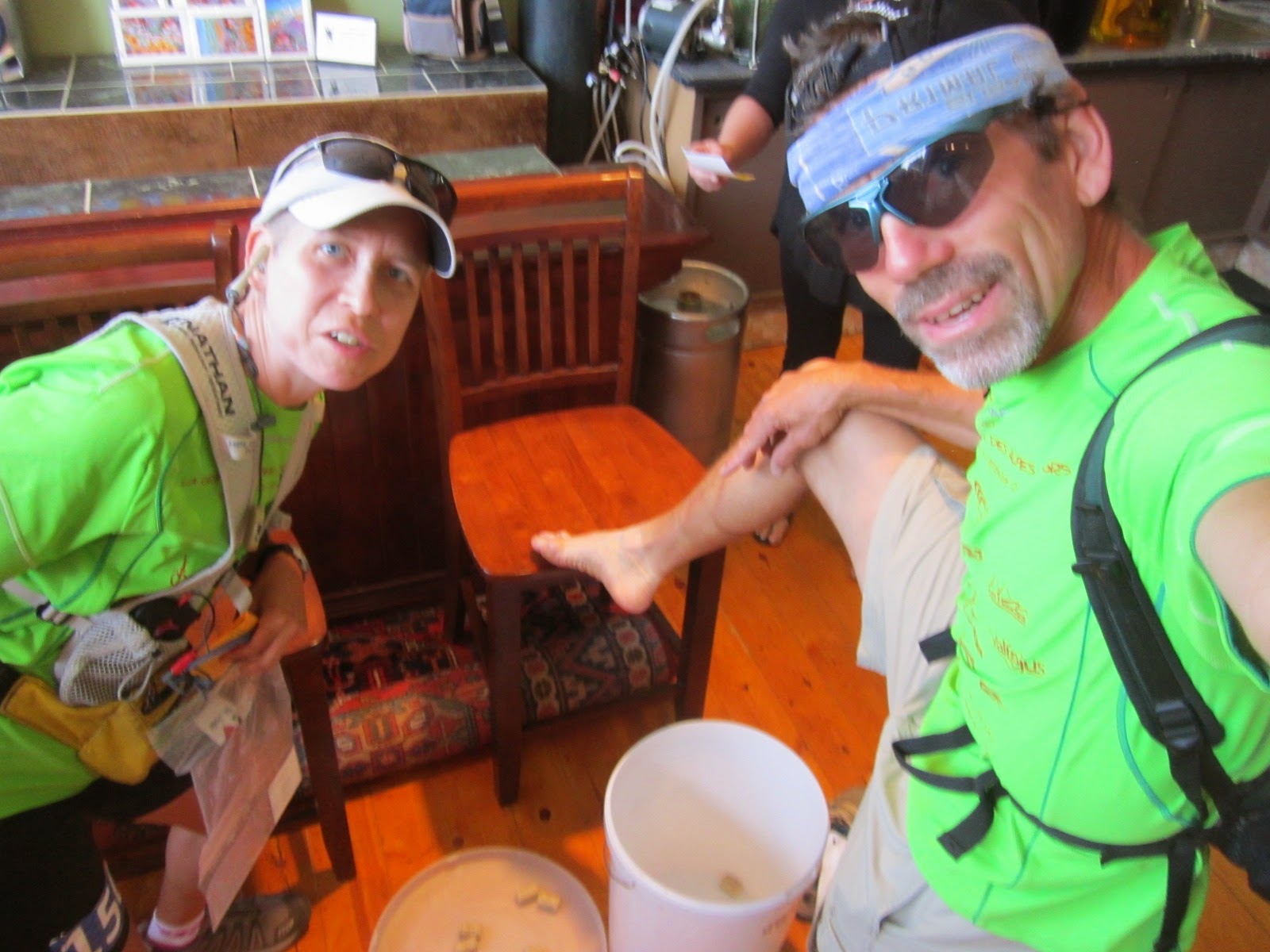 Granville Island was close by with our next checkpoint - hey, we're finally doing a stand-up paddle!  We had practiced last year in Puerto Rico, only a few months later to put that training to the test.  I hung out on the dock and took pictures as Kip and I cheered on our respective teammates: 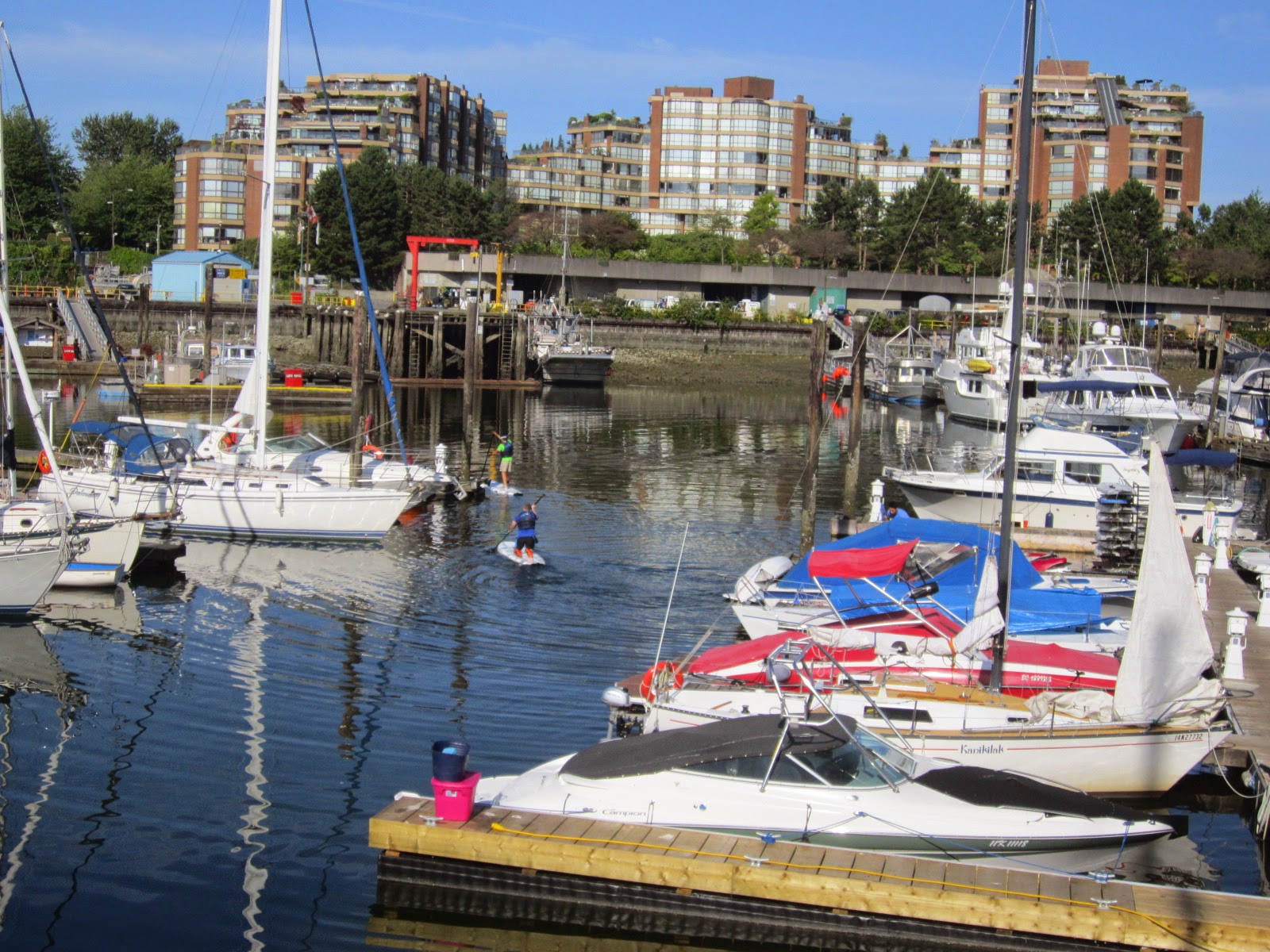 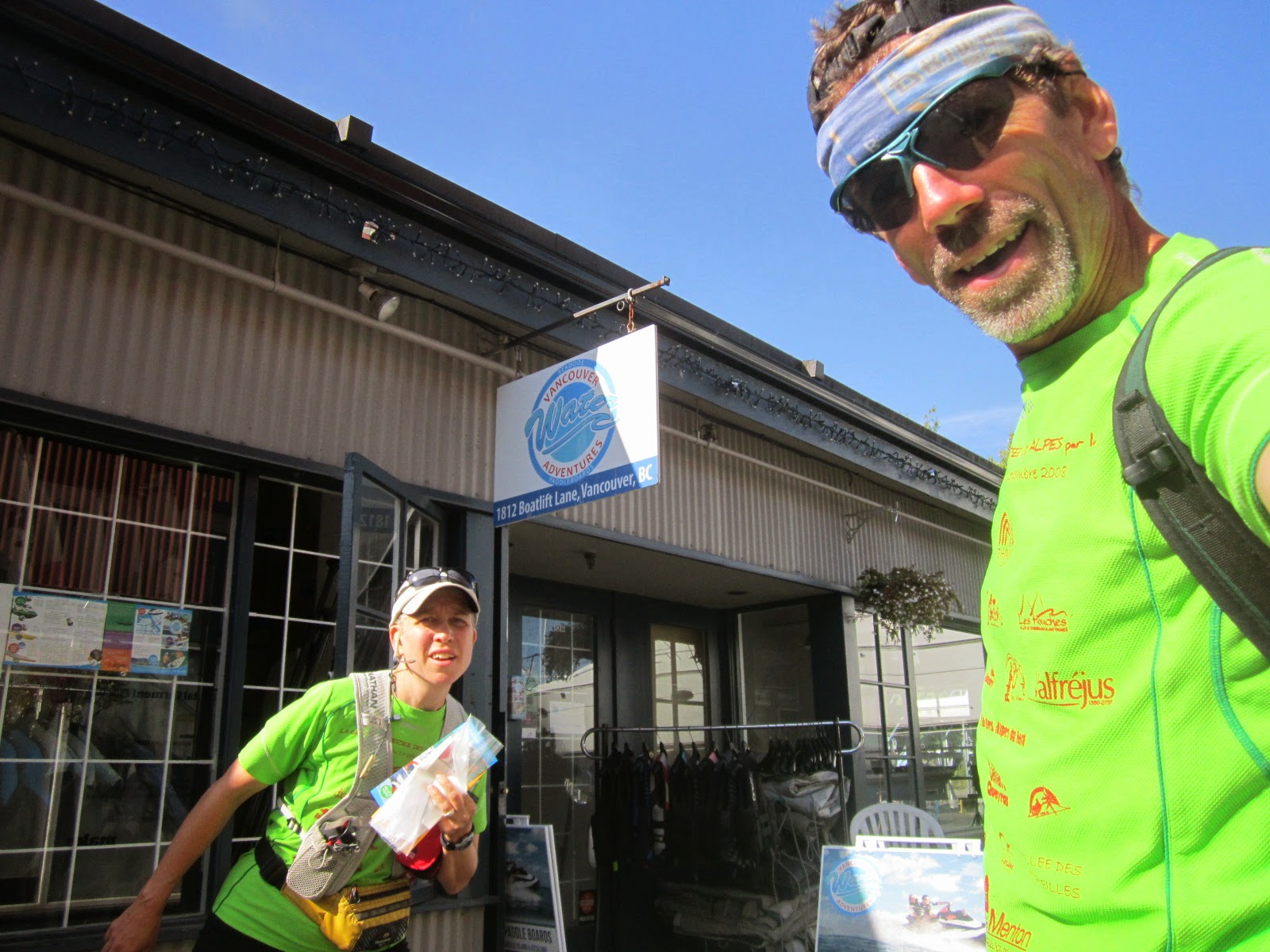 Right around another corner to the Lobster Man - looks like another challenge for John.  He was blindfolded (not sure how many layers of blindfold he's got on there) and then had to reach into a tank to pick up a crab.  I held up my end of the bargain with selfie duty for once.  Yay, we both did it! 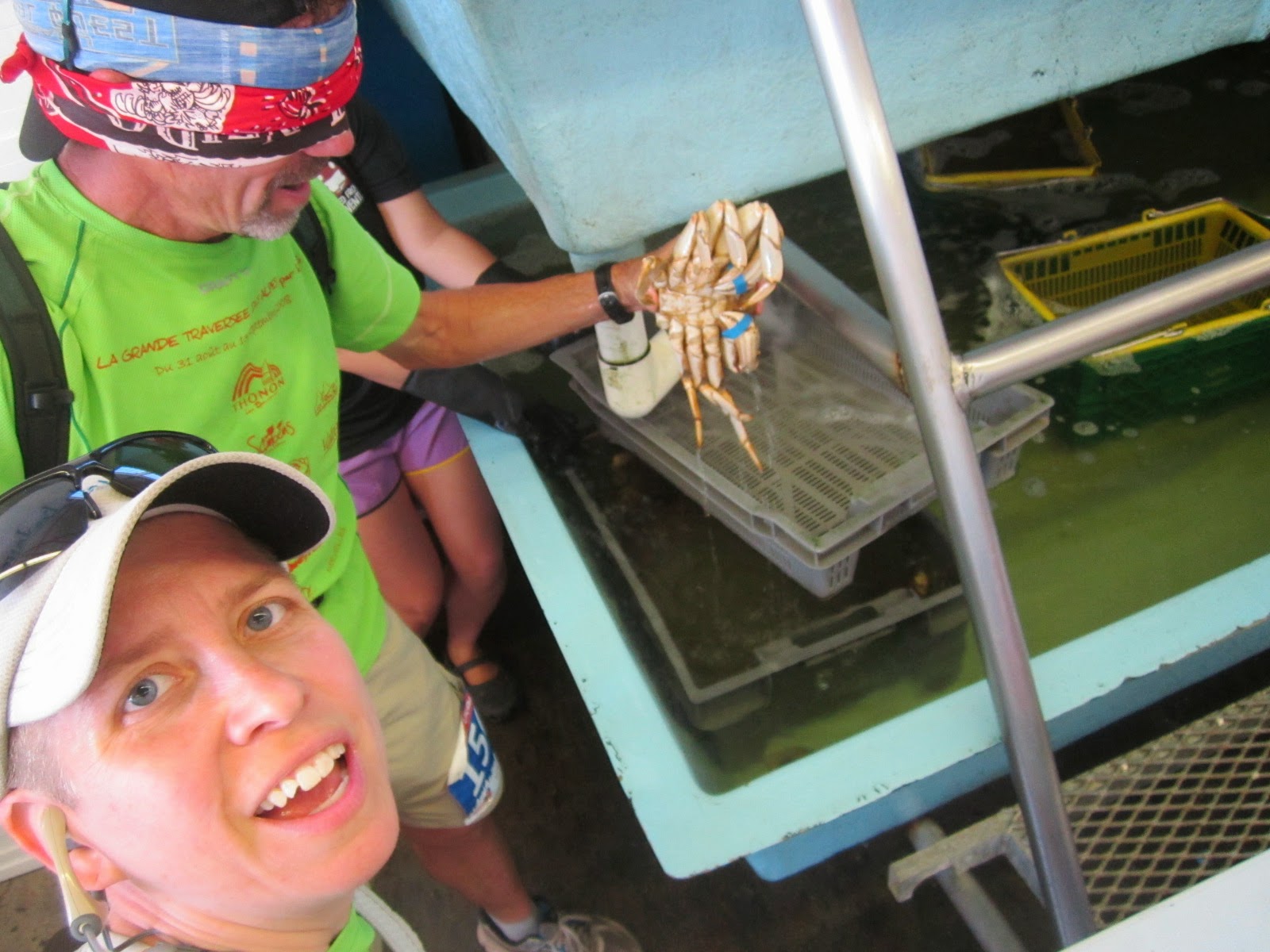 On the way off the island, several teams noticed this "Arret" stop sign for one of the tic-tac-toe squares, nice.  I'm not certain what's so funny, surely I'm not yelling at John already... 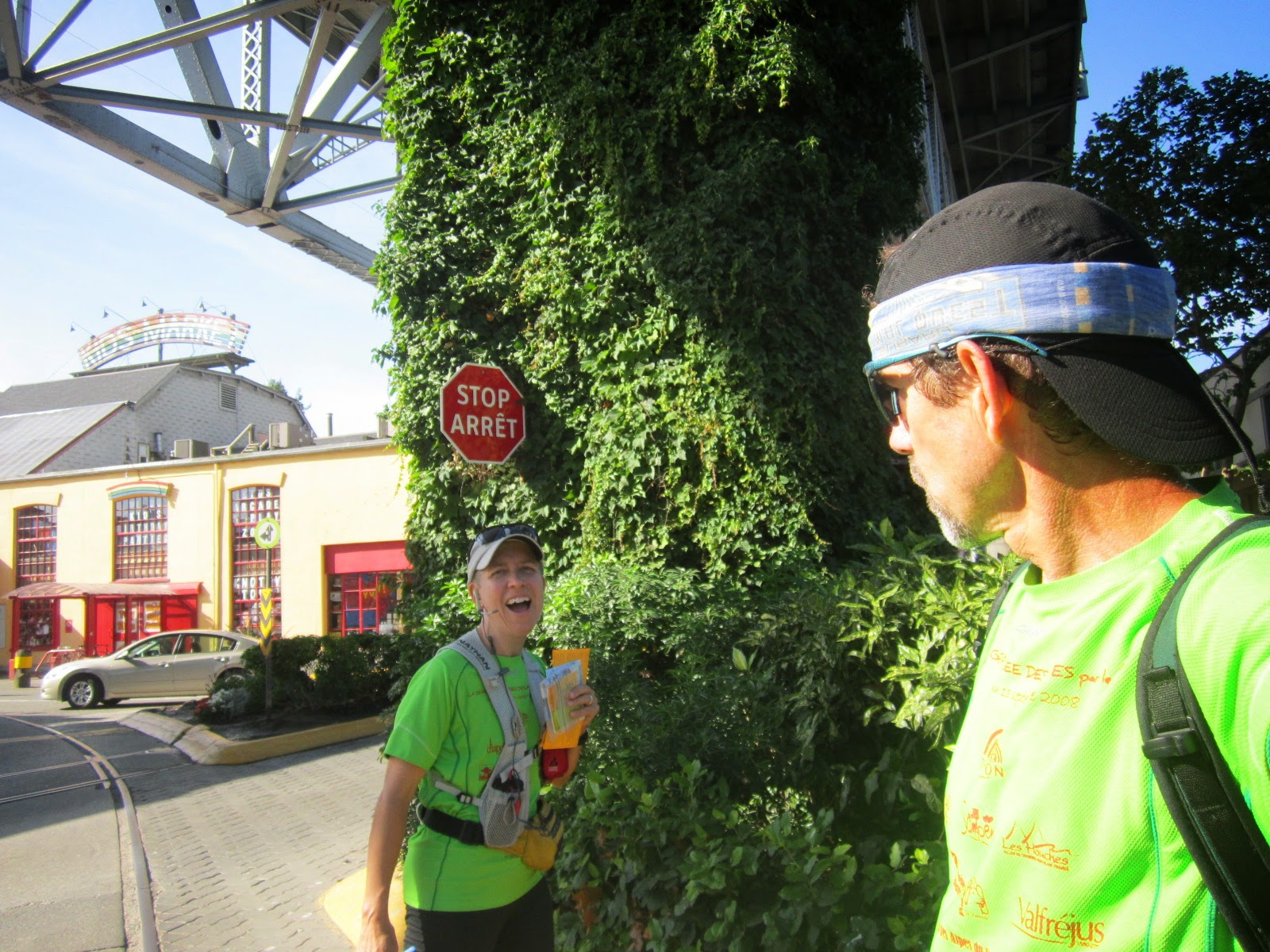 Time for the first long run of the day.  We hooked up the tow line and hoofed it to the east.  My knee was holding up fine and we were somewhere in the vicinity of Kip/Dave, the Nads, and various other teams when we hit Solly's bagel place.  Here we had to stretch out bagel dough to pass it over our bodies while holding hands, neat!  We managed easily enough and got our photo: 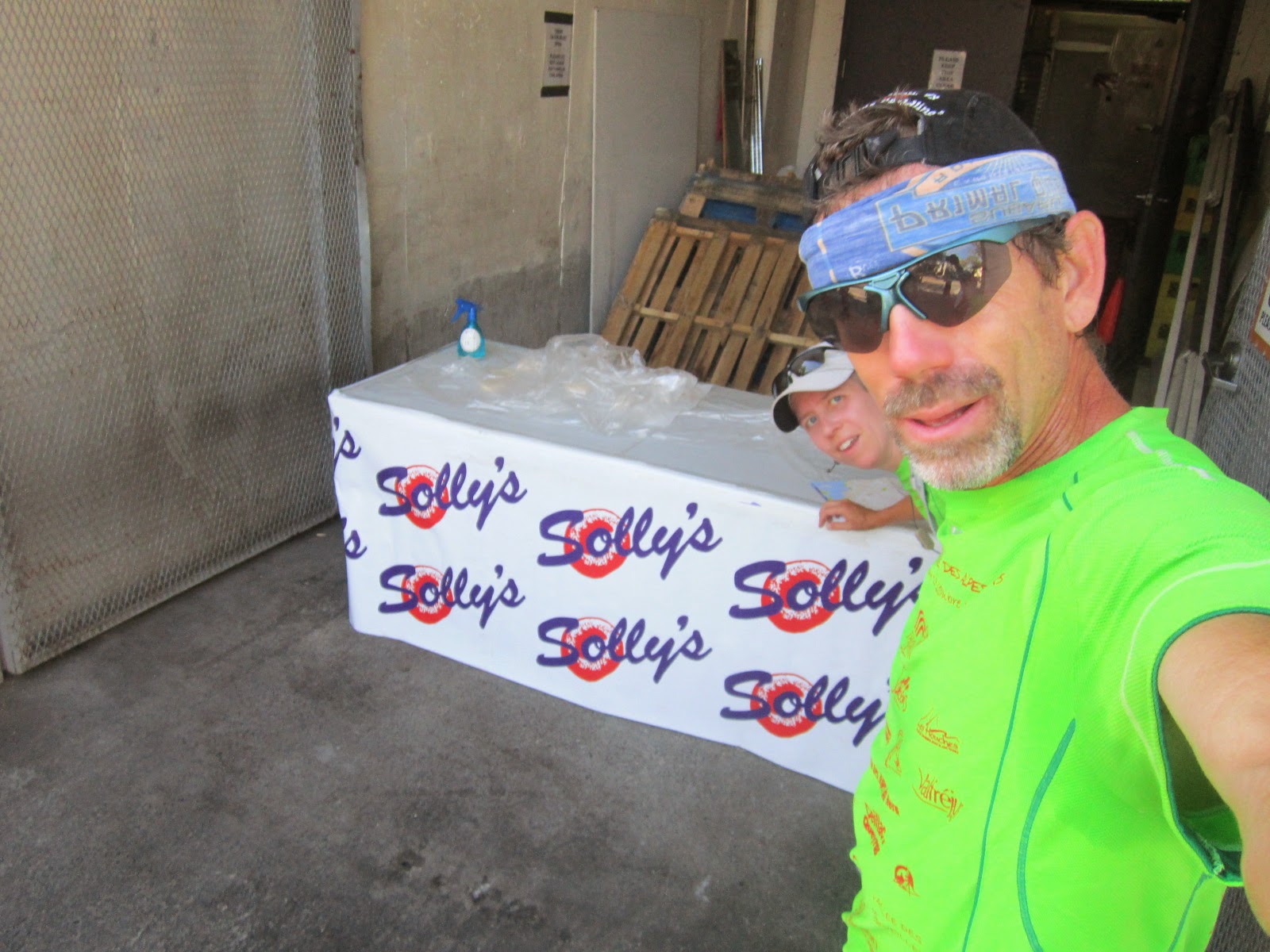 A coffee bean challenge, uh oh!  Straws instead of chopsticks make all the difference, no problem.  John made it a point to capture the Nads on film behind us, hi guys!  Also, a shout-out to Andy for offering to let us go ahead when it seemed like we had lost our place in line.  No time was lost by either team, I don't think, but we greatly appreciate his concern for fairness. 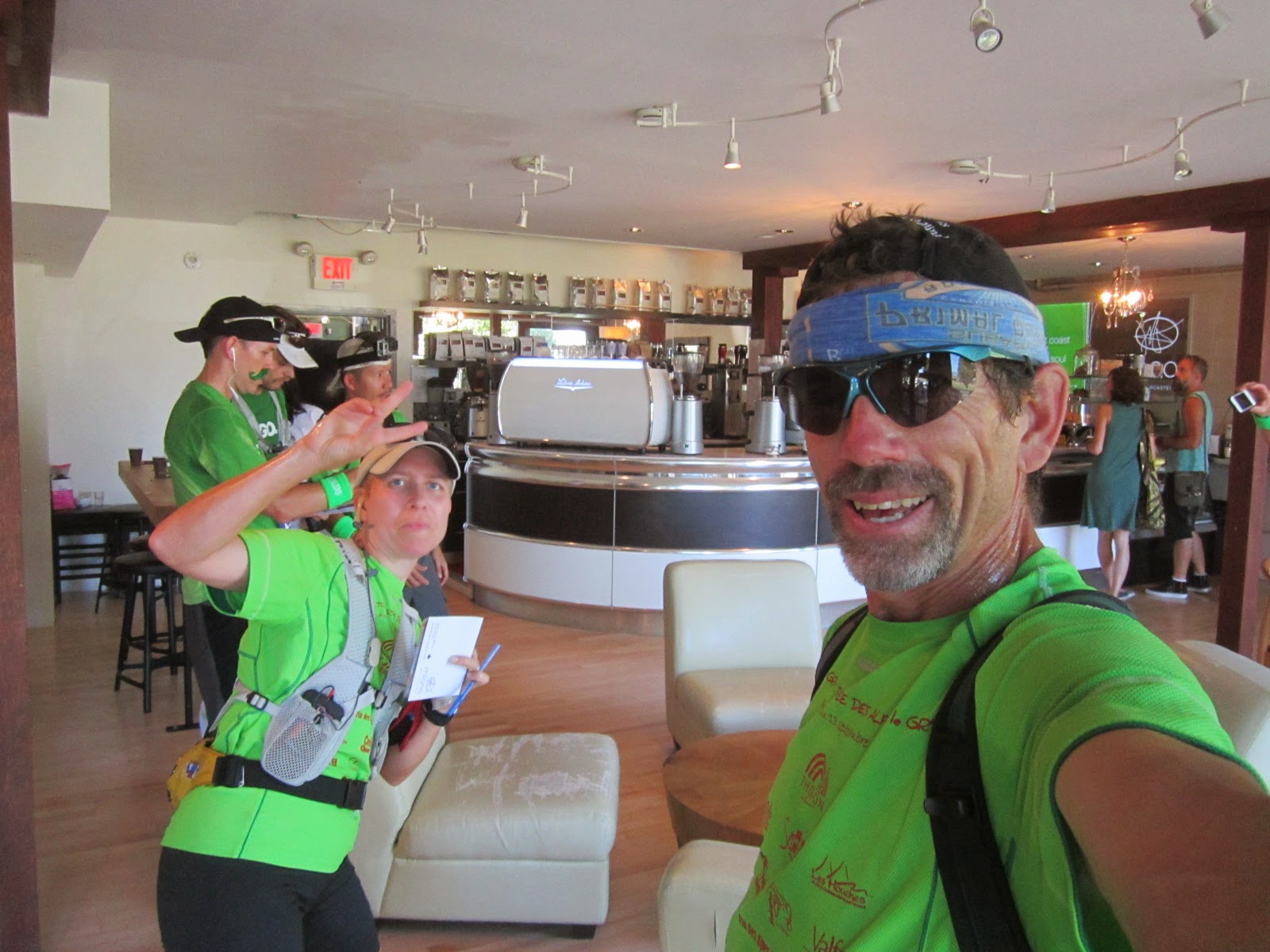 And a quick shot outside the coffee shop, this time with Zack Attack in the background: 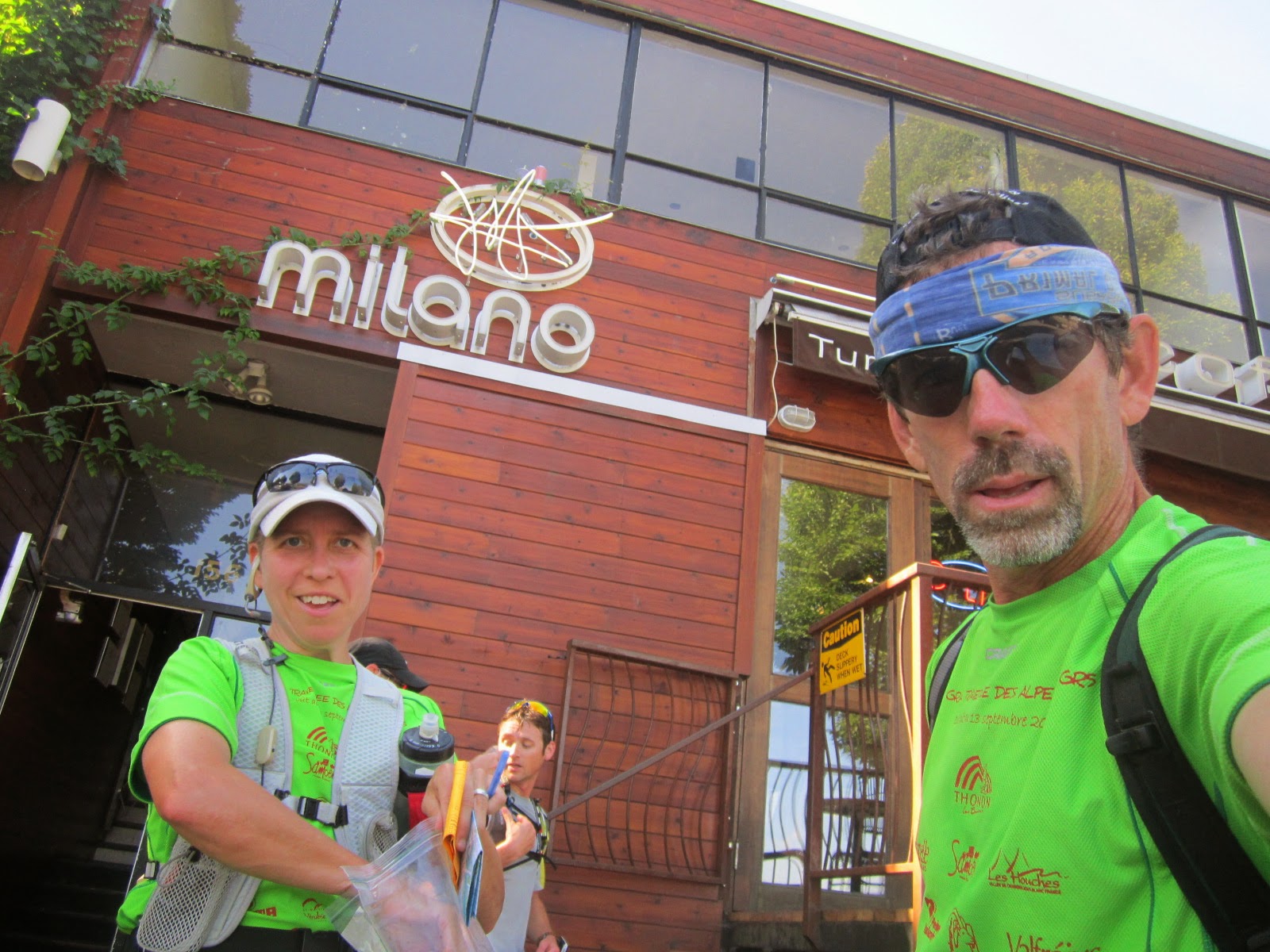 On over to Main Street where it was my turn to perform a challenge - flipping a popsicle stick around from one end to the other in my mouth.  I eventually realized that I have a tongue and managed to make it work:
https://www.youtube.com/watch?v=KEEdmhj3zdw

Up the street to a bakery where John dropped tea bags from a balcony to try to land one in a cup on my head.  We lost a couple minutes here trying different things to get the tea bags to drop in any predictable kind of way, but eventually landed one, phew. 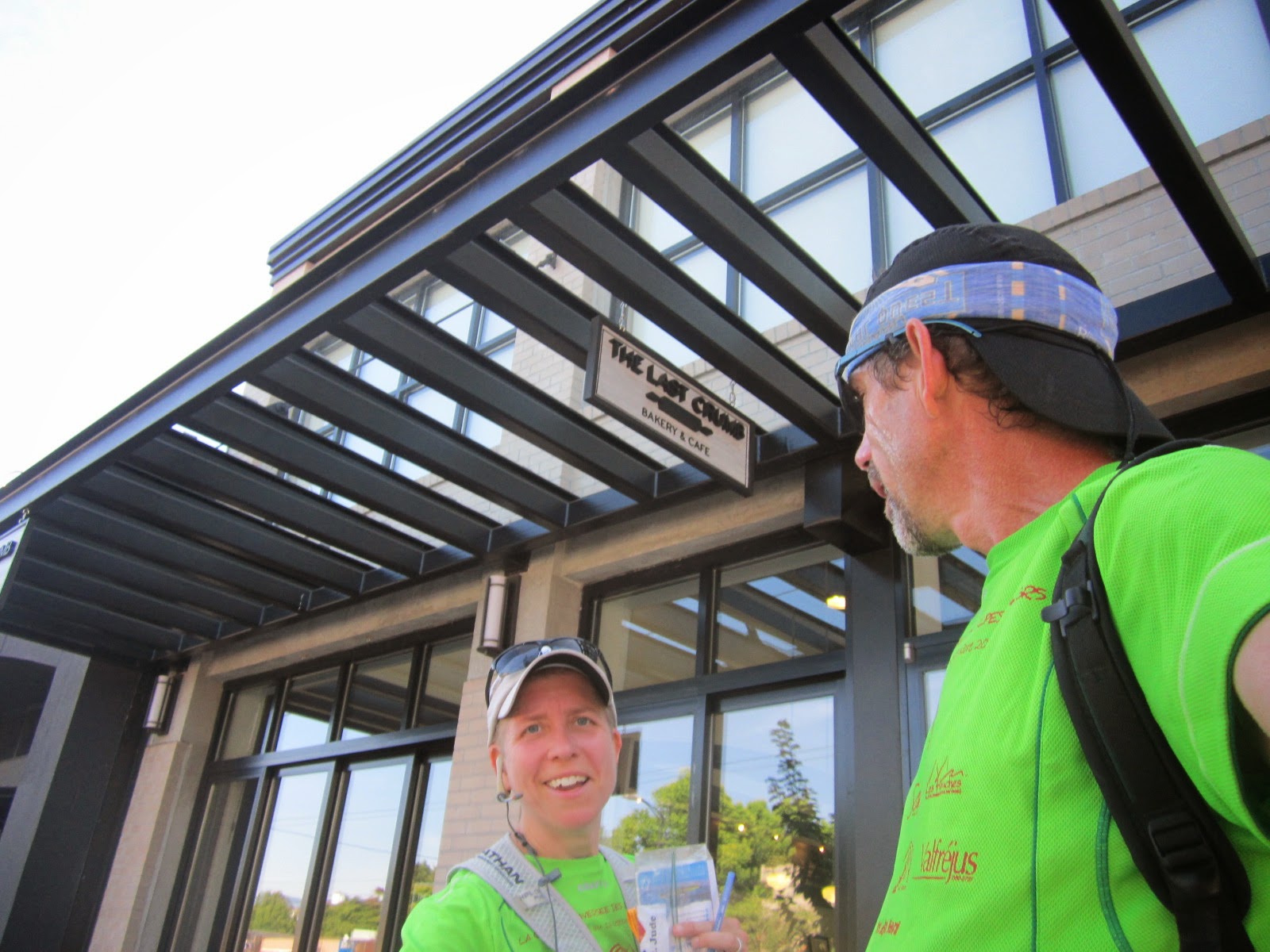 Now back to town!  Sheila had been wading through various public transportation options for us, deciding to send us over to Cambie St.  We were to look for a bus while running north on Cambie to the Sky Train station.  No bus, but an immediate and very fast subway awaited us at Broadway.  Soon we were back downtown and running toward...

...Button Button!  The woman running the shop was great, perfectly helpful without giving anything away.  Kip and Dave were just finishing up as we got there, then a couple minutes later we found our "button in a haystack" (spoiler alert for the afternoon race) and we were done too. One last checkpoint, a bit of a run and we were looking for a bus because my knee was starting to talk to me.  No bus, just a little limping on over to a flower shop.  This was actually the funniest challenge of the morning, dressing your teammate up like a flower.  How does that work, you might ask?  Wrapped in cellophane, tied with a pretty red bow, and with a flower in my mouth for good measure.  Nice work, John: 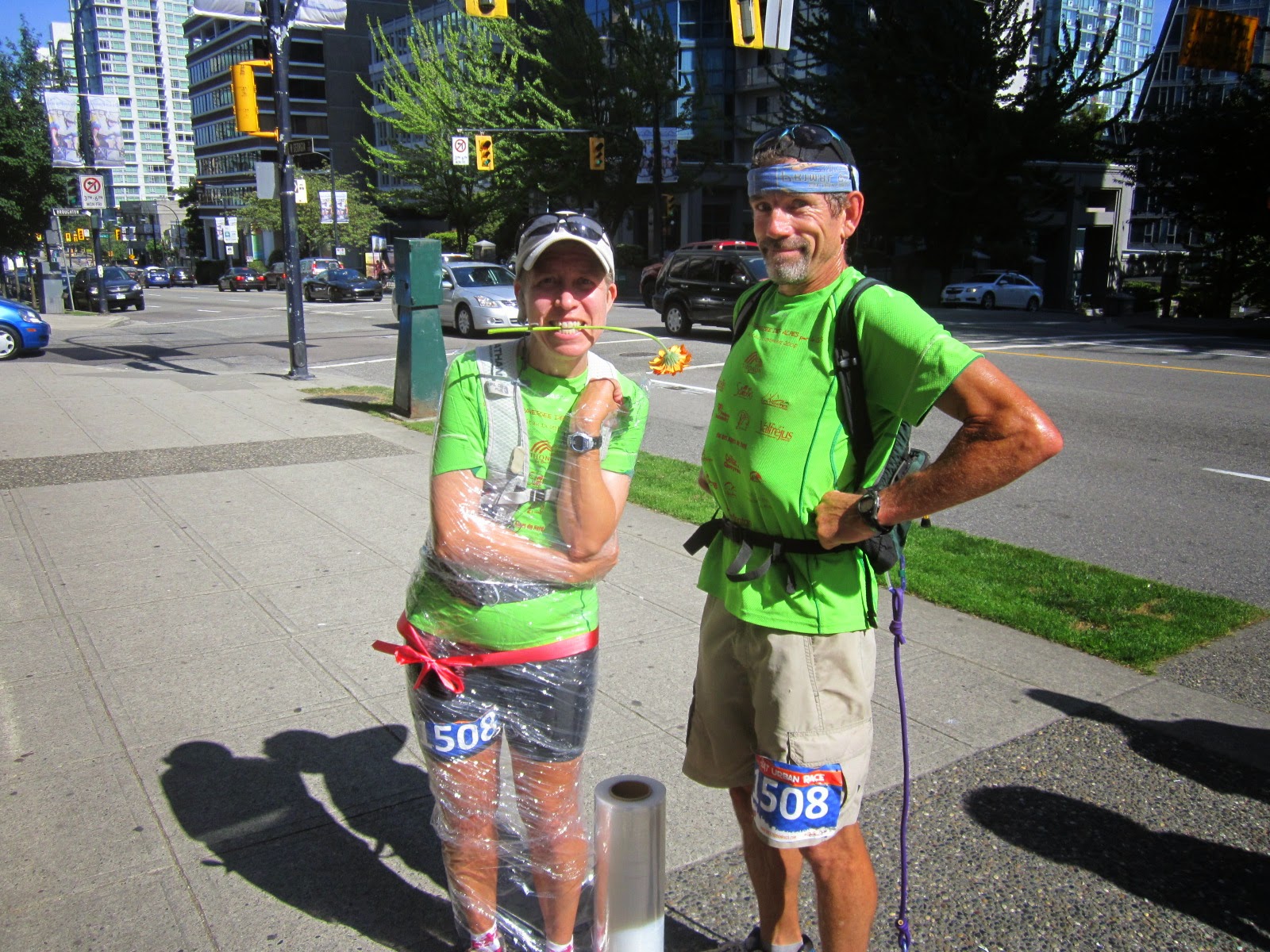 Just some cellophane/ribbon disentanglement, a few blocks back to the finish line, a box of mac & cheese, and a loonie and a toonie in our pocket to close out the tic-tac-toe grid: 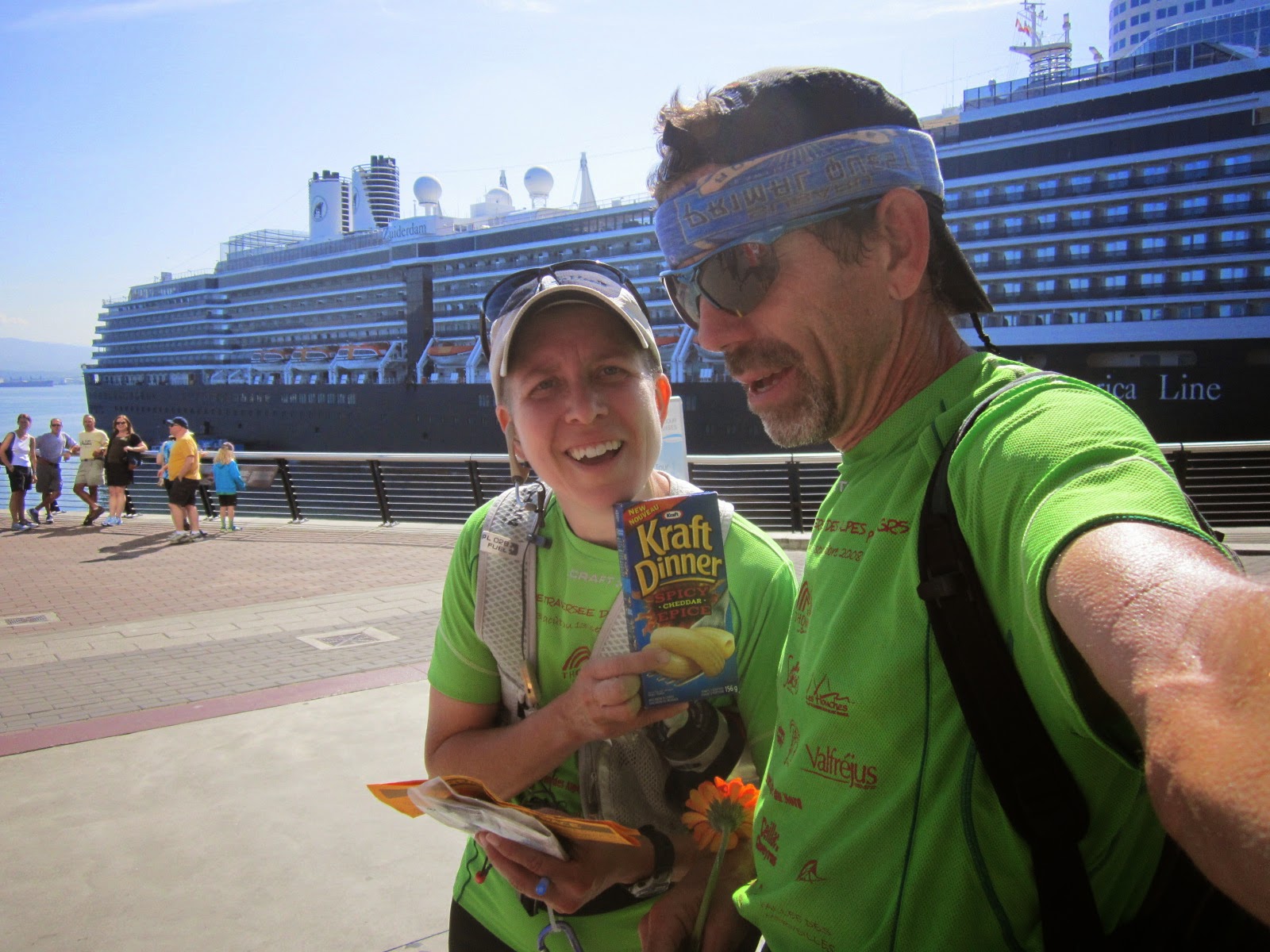 Good enough for 5th, amid a group of 4 teams within 4 minutes of each other for 3rd to 6th place, including Kip and Dave, the Tweedles and Taintastic.  We would be joining the Finnsters, the Nads, Cougin' It, and our friends Richard and Chris in the Elite 8 afternoon race.  Success! 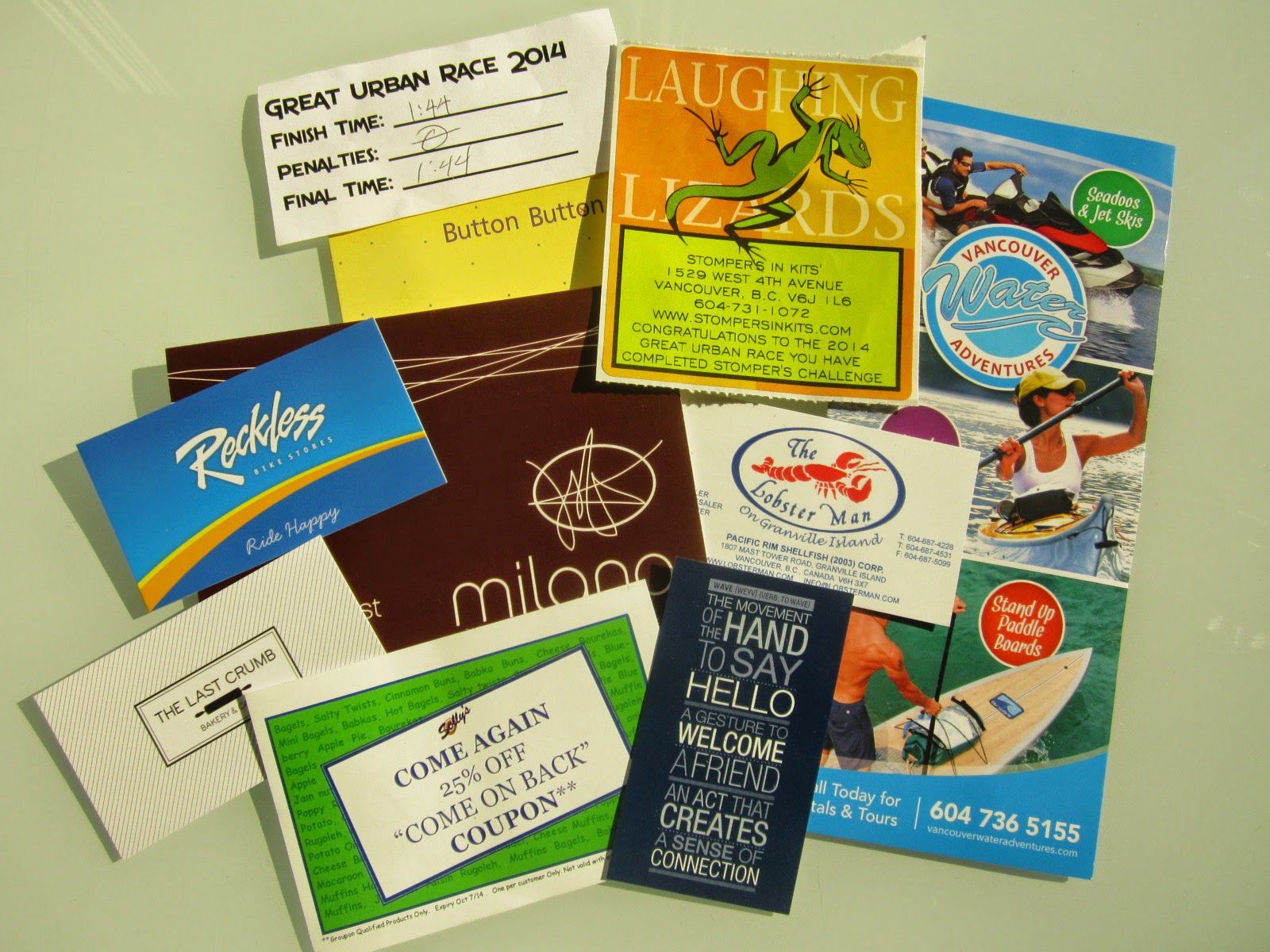 Now to go figure out what to do with my knee for the next race...