Yosemite!  Let's start with the big one - our hike up to Half Dome.  We scored permits in the lottery a few months ago and basically planned our visit around it.  It was fun to bike over to the trailhead from the campground and start walking from there.

The start of the trail, also the start of the John Muir Trail, which is very cool and maybe a trail we will follow the whole way someday (211 miles to Mount Whitney!): 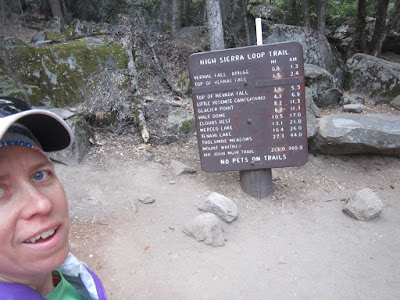 Beautiful trail heading up the valley: 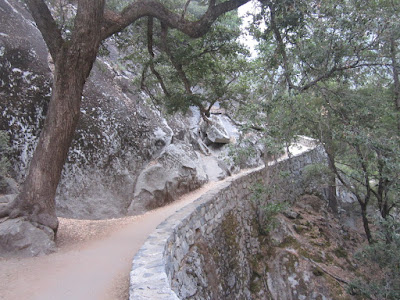 I opted for the Mist Trail instead of the JMT bypass in order to see Vernal Falls.  Fun duck-under rock: 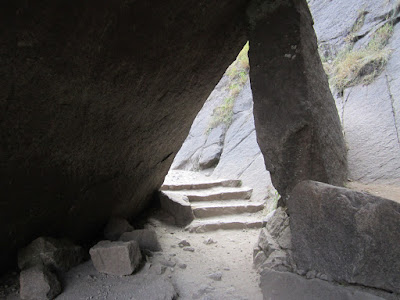 And a beautiful waterfall!  There wasn't a whole lot of water but it was still flowing, and we can imagine how amazing it is during spring snowmelt.  Water flows out of cracks in the rocks and there is a rhythmic "clink clink" as it hits the rocks at the bottom.  I enjoyed spending some time admiring Vernal Falls: 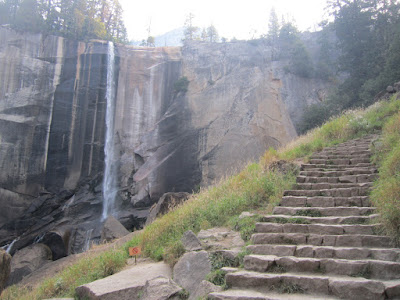 The last steps up to the top of the falls: 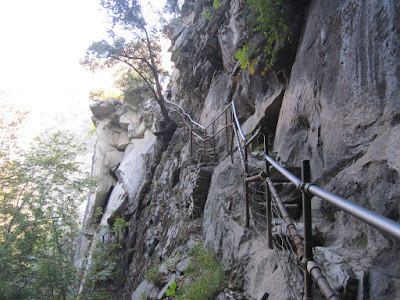 A glimpse of Nevada Falls, also tall and gorgeous, just harder to see: 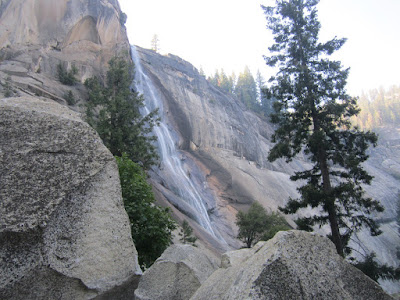 The back side of Half Dome - we're coming! 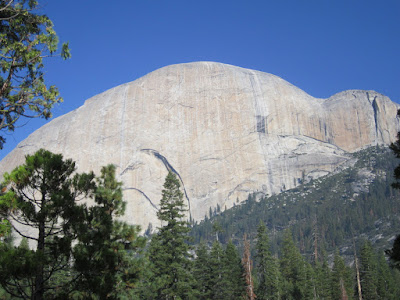 Starting up the trail on the "subdome," the smaller hump with a lovely trail cut into the rock: 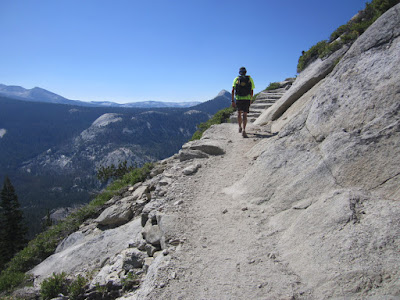 Stunning view of the valley to the east - that's a lot of granite: 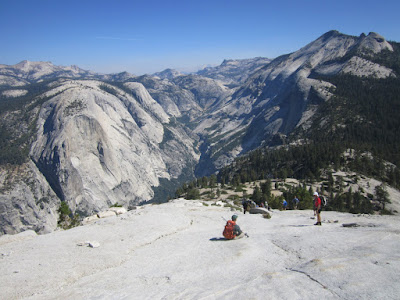 Seems like an appropriate place for a selfie, with the cables in the background: 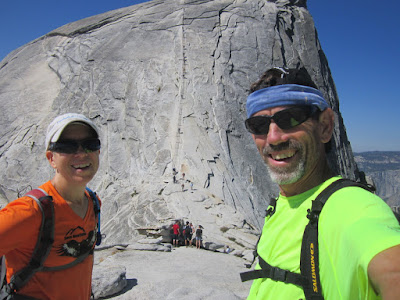 So, I put the camera away and concentrated on getting up the cables.  Wow, that's a steep rock face!  We hauled ourselves up, and I was rather amazed that this is an actual "thing" that people do.  We had brought a lanyard for me, just in case, and I was more than happy to have it along.  Yes please, I would like to clip myself into the cables as backup protection.  With that many people above and below us, and with the rock being THAT STEEP, it made sense to be clipped in (even though it was just to my backpack strap and not a harness).

Wow, just wow.  The cables and posts and planks made it a doable endeavor, and quite memorable.  Eventually, waiting our turn as people pulled themselves up above us, we made it to the top.  Yay!

One of our first views from the top was over to the north rim and the beginnings of a fire, hmm: 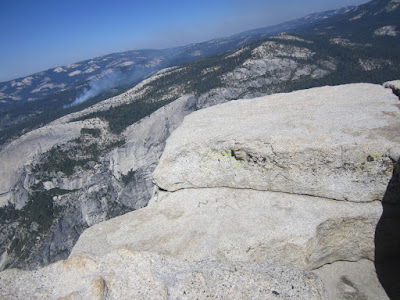 A guy taking a picture of a group over on the jut-out rock: 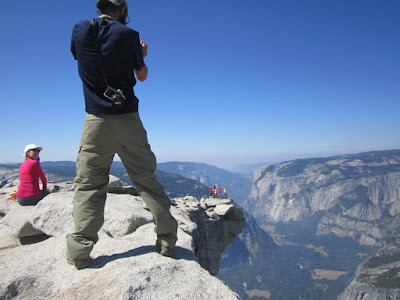 Looking back to where we were just sitting, it is quite an impressive spot: 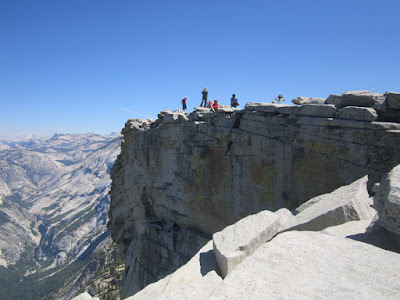 A view toward the west and the entrance to Yosemite Valley.  It was a bit hazy from the Rough Fire (which is many miles away but huge), happily this particular day was about as clear as it would get: 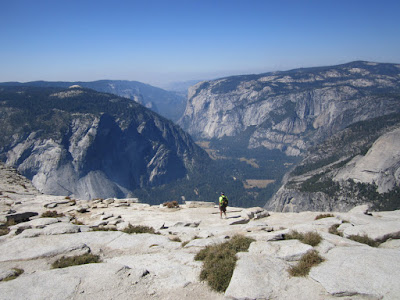 John took a photo of the valley below (I declined to get close to the edge): 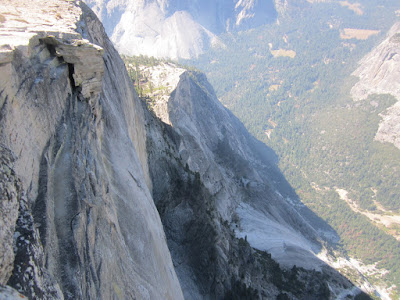 Yep, doing just fine over here on this rock  :) 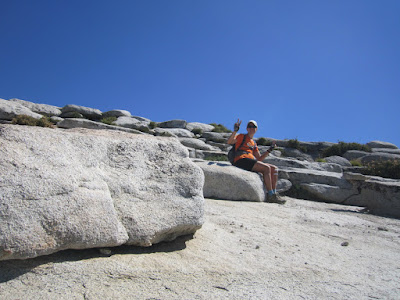 Yay for being on top of Half Dome! 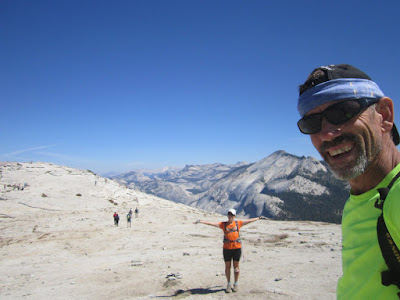 I was surprisingly more comfortable on the way down (compared to going up, probably because I was wondering the whole way up how the heck I was going to get down!).  Good gloves and a rappel technique worked great.  I was happy enough that I got out the camera for a couple mid-descent shots: 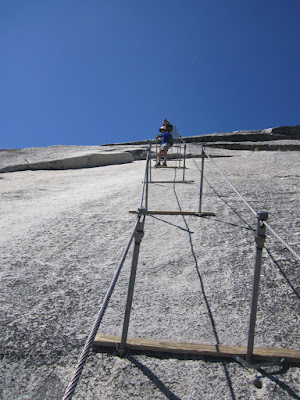 Lots of people still coming up, fun that I got to meet a lot of them and chat briefly at each post: 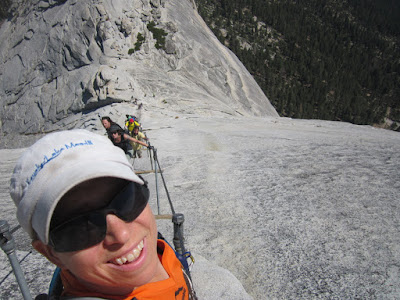 John made it down way before me (he probably ran down or something) and took the opportunity to snap a couple photos with his phone - that's me at the bottom of the picture: 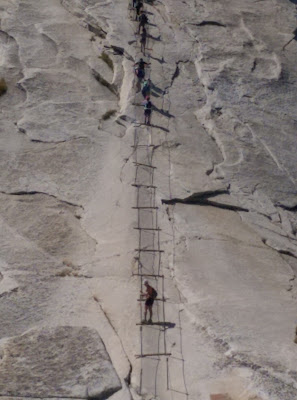 I made it!  Very happy to have the lanyard, and I highly recommend it for anyone not completely comfortable with this kind of thing: 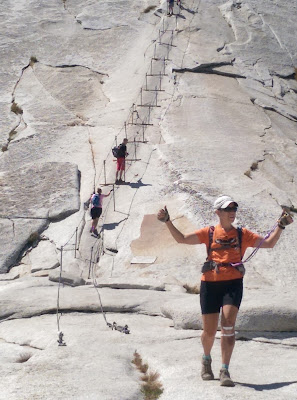 It was a fun run all the way down.  I spotted a woodpecker in a tree along the way: 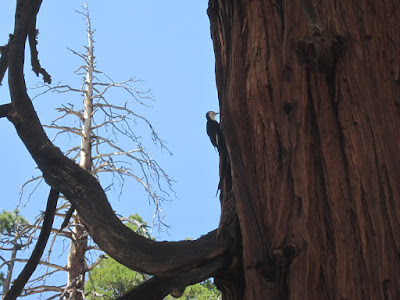 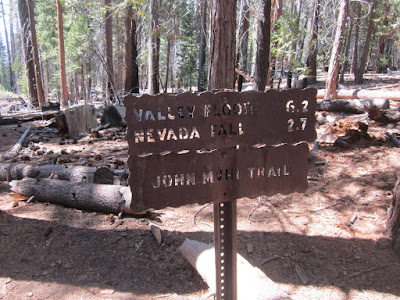 View from the top of Nevada Falls (following the JMT all the way down): 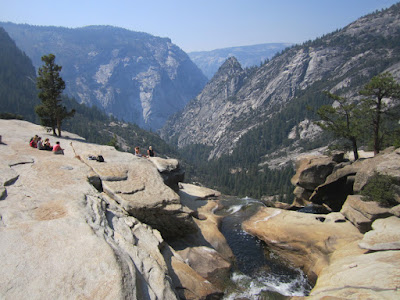 Amazing trails built into the side of cliffs: 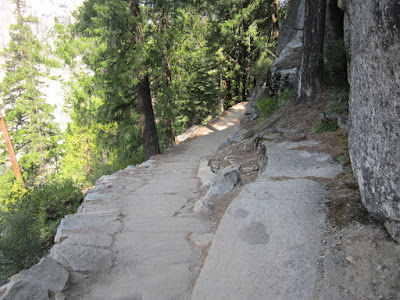 And the view in the other direction: 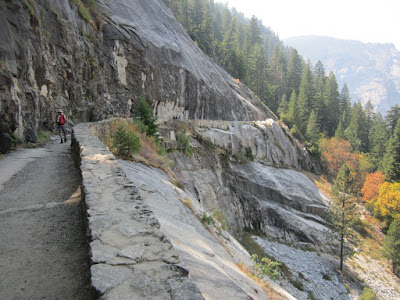 A decent glimpse of Nevada Falls: 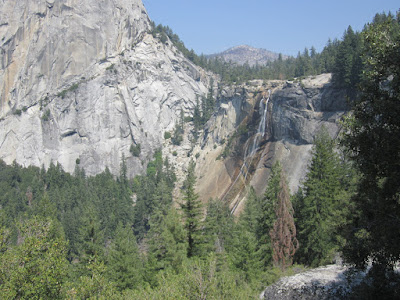 And one last look at Half Dome from that back - thank you Half Dome! 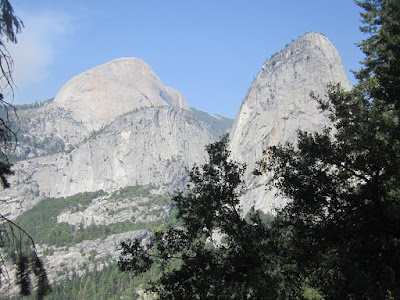 And, oh, that fire is getting larger.  We should probably keep an eye on that... 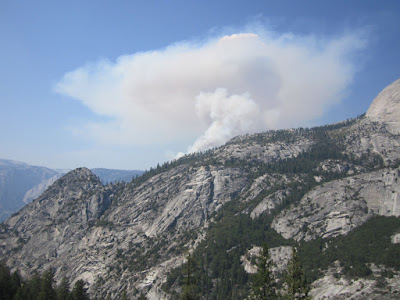 What a fun day!  Totally enjoyed it.