I volunteered at PQ-Tahoe, wanting to see how the new incarnation of this race would unfold.  I enjoyed our time volunteering in Montana in 2008 and it seemed like a fun addition to our summer.  It was indeed fun, in fact a lot more fun than last time.  I met many amazing, awesome, inspiring people, laughed a lot, cried a little, and I think I even helped some here and there.

I was impressed with the race directors and I respect the way they ran the event.  They obviously care a great deal about all the people involved and about putting on a good race.  No race is without glitches, but in this case I truly believe the RD's learned from them and will come back with an even better event next time.  They worked incredibly hard, constantly helping and getting hands-on with all aspects of the race.  Kudos to Maria, David, and Paul, I enjoyed working with you!

And huge congratulations to all the racers that tackled this beast of a course.  It was huge.  It was challenging.  It never seemed to end  :)  And almost all the teams persevered right to the finish line.  With smiles on your faces!  It was a true joy to watch.

OK, from the beginning, with gear strewn around race HQ as teams got organized before the race: 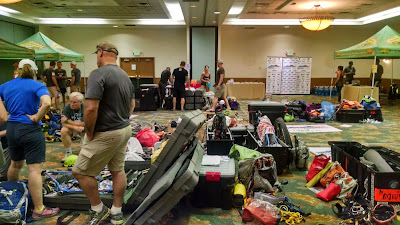 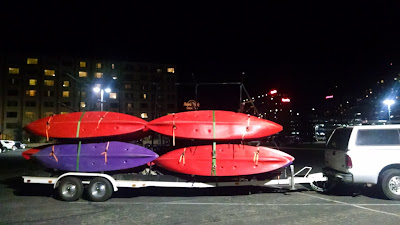 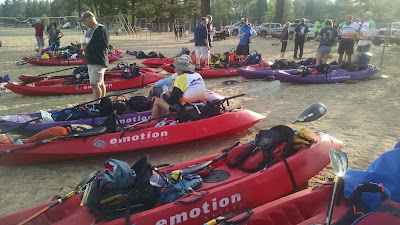 All the stuff making its way into boxes to be loaded and transported: 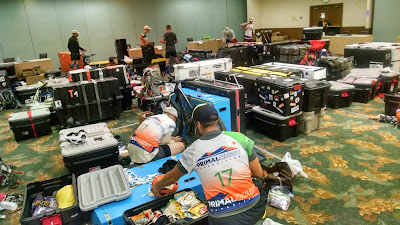 The team parade to the base of the gondola: 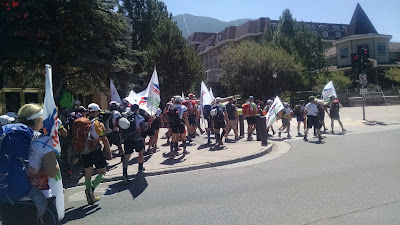 A beautiful view of Lake Tahoe from aboard the gondola on the way up to Heavenly where the race would start: 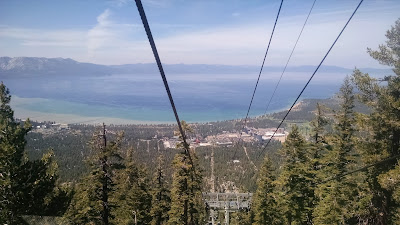 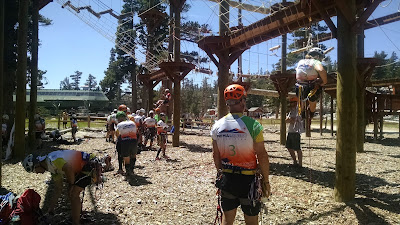 And... go!  The race started with teams running down a dirt road from the top to the bottom of the mountain.  The instructions were to follow the markings down the road.  When the markings went one way and the road went the other, the lead teams went to check it out.  Hmm... 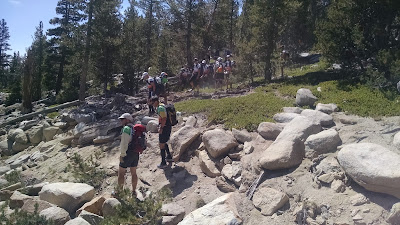 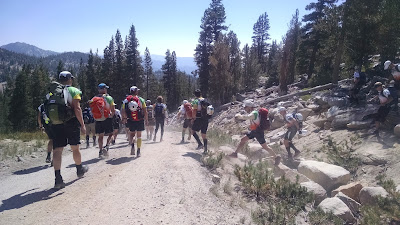 Team NorCal trekking down the road: 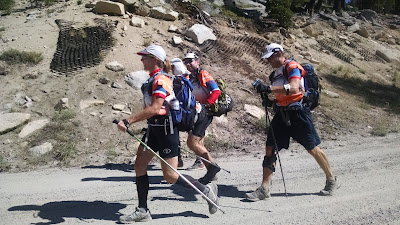 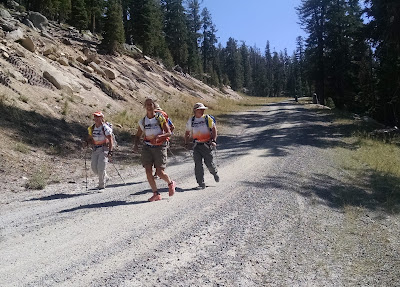 I had fun running down the hill with the teams, then I drove over to Cave Rock (TA1) for the take-out of the first paddle leg.

Team Bones was the first one to arrive: 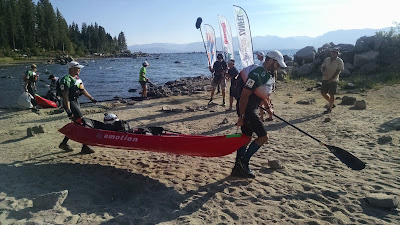 Changing out of PFD's to switch to bikes: 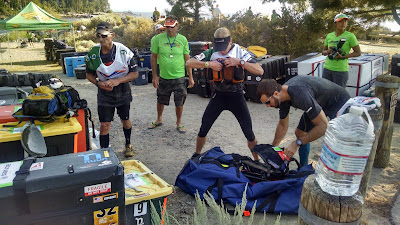 At that point I needed to leave to "set up" CP2 (i.e. put up a PQ flag and have my clipboard ready).  I spent the evening checking off teams as they came through Spooner Pass to start their long (long!) journey on the Tahoe Rim Trail.

The camera crew getting lots of footage of team Bones: 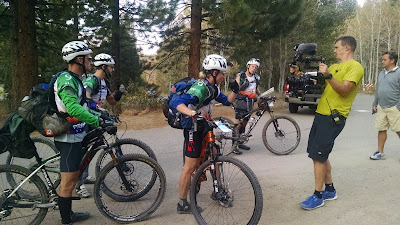 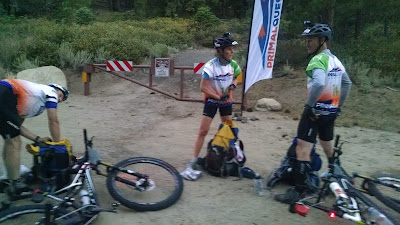 Team NorCal checking in at CP2: 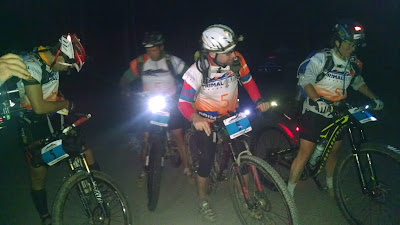 Team Seek Adventure was all smiles: 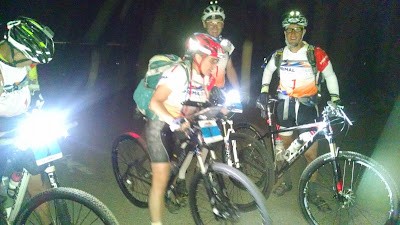 From there I continued - oh wait, I actually got to sleep in my own bed that night!  That was a nice little break.  OK, now ready to start on the long adventure out on the course for 6 days.

On the way to my first TA (#3) I stopped in at TA2 at Kirkwood where teams would arrive on bikes and leave on foot.  This TA had a huge parking lot to work with.  Lots of space (and wind) but no shade.  They did a nice job with the visual setup: 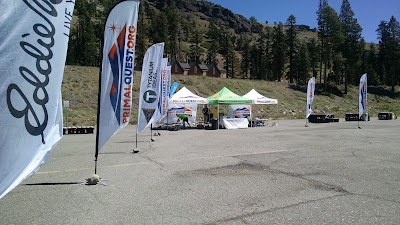 Team GODZone was the first to arrive.  One of the ladies (the one not in the photo) was feeling rather sick, so they weren't in a huge hurry to move on: 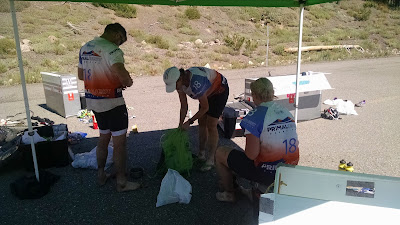 Seems like a good time for a recovery nap: 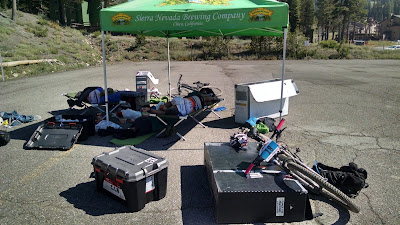 I wanted to make it to TA3 before dark, so I drove on ahead.  The scenery in this section is amazing, I can only try to imagine what the racers got to see during their trek: 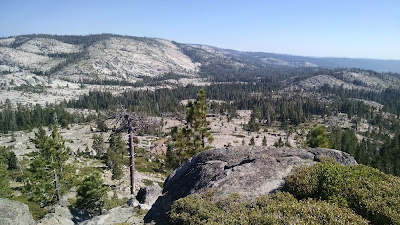 TA3 was at a shady campground next to a creek, very nice.  The main downside was the bugs, but really they weren't too bad.  I got to meet John Vonhof (of "Fixing Your Feet" fame!) and Khristy the medical lady and Phil my co-TA captain.  Except Phil ended up getting called to do a lot of other things so we never really got to work together, bummer.  A bunch of other folks came and went, the media teams, the POV camera guys, the logistics crew bringing gear and bike boxes, more medical staff, the TA4 volunteers, and the race directors.  Way more folks than I ever saw at a TA in Montana.

I had time to run up the road and view the massive climb site of Calaveras Dome in the morning.  What a rock!  I cannot imagine ascending and rappelling this thing, although I have a few friends (and a husband) who have described it to me from 2003. 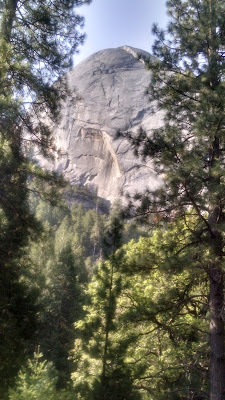 All teams were moving quite a bit slower than expected, between the hike-a-bike on the Tahoe Rim Trail and the challenging terrain in the trek.  That pushed back the whole timetable and required some adjustments, but eventually things seemed to get sorted out.  The biggest disappointment is that 3 teams didn't get to do the ropes, bummer.  The RD's never meant for that to happen and hopefully they will prevent that from ever happening again.

Team Bones made it to the ropes first, eventually completing it and then trekking to TA3 in the early morning.  They slept a couple hours and then got up to build their bikes: 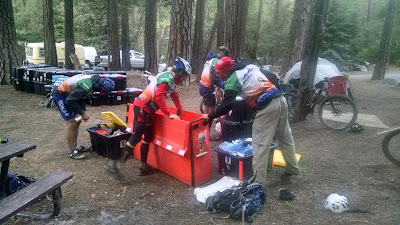 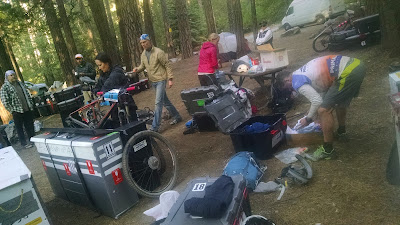 One of the racers had apparently found this, carried it to our TA, and put it in the trash.  I rescued it briefly so I could send a photo to John - my turn to find an apt balloon! 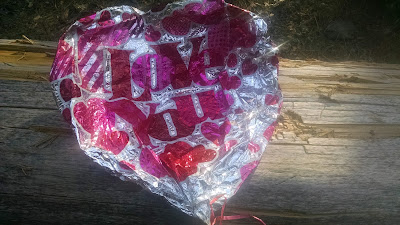 We realized that the sections between TA3-TA4 (fast bike) to TA5 (a few hours of whitewater kayaking) to TA6 (a trek that could be as quick as 18 hours) would not take the lead teams very long.  We were all scheduled to head to TA6 next, but there were still 9 teams coming to TA3.  Time for one of us to go set up and man TA6, so I gathered some supplies and one EZ-Up and boogied on out of there.