Yesterday John and I volunteered for "Traffic Control" at the Leadville 100-mile mountain bike race. This is our first experience with this race and this type of assignment. No one ran over a cyclist at our intersection, so I guess we did OK.

The start/finish line on 6th Street in Leadville: 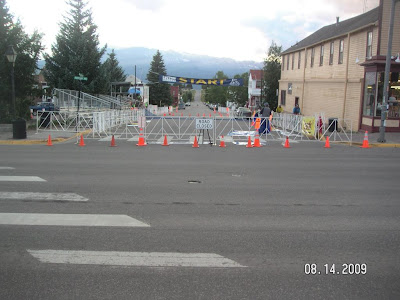 The day started out rather miserable - cloudy and then rainy for a couple hours. We had enough clothes on, but we were sure glad we weren't on bikes: 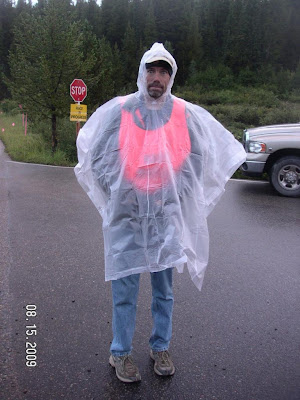 The rain cleared briefly and we even saw some sun when the first sets of riders came through. Lance Armstrong and Dave Wiens (winner of the past 6 races) are in this pack somewhere: 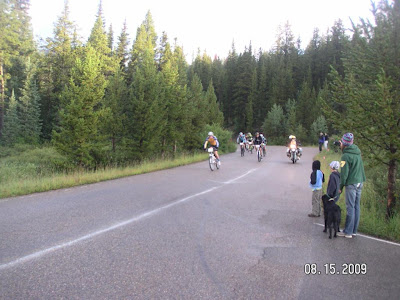 Another of the early packs: 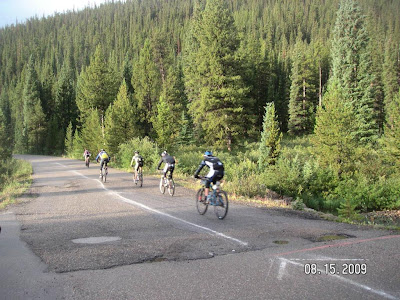 Then it started raining for real, and many cyclists looked pretty miserable at the bottom of our hill next to May Queen campground. At least they were about to start climbing again, hopefully that warmed them up a bit. Some of the riders were actually smiling, which was a surprise. My favorite was the little bike bell "ding ding" greeting that we received from a couple racers. Very cool.

We heard reports of a rider going off the road above us. We didn't have cell service, so John tried to find the sheriff (but he had departed from the intersection at Hagerman Road) and finally when the largest packs of cyclists had gone through he drove up the road and found a guy named Elden looking pretty beat up. Elden had lost focus and ridden off the side of the road, bounced over some rocks, and cracked his helmet. Luckily he didn't hurt himself too seriously. John drove him back to town to the med tent, and that was our excitement for the morning.

After lunch in town we scurried back to our post just in time to see Lance ride back through - go Lance! He set the course record, and I heard he finished with a tire going flat. When he came past us with about 15 miles to go, he looked like he was just out for a weekend ride: 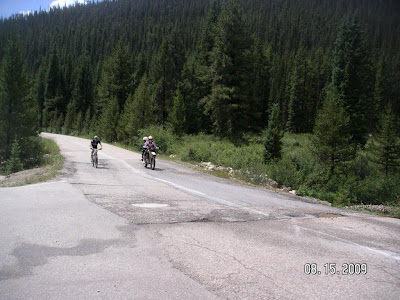 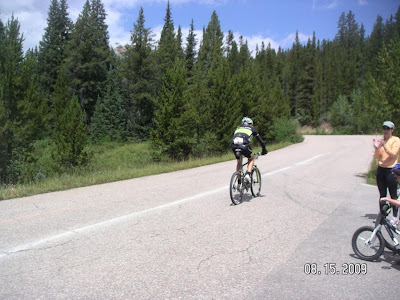 John barely caught a glimpse of Kathy Hudson as she pedaled by, so he managed to yell out her name - awesome finish, Kathy!

Cheering on the racers: 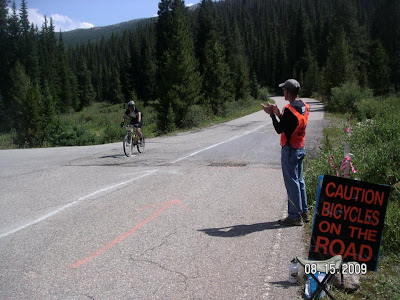 Some spectators put on a hula show for a while - don't worry, be happy! 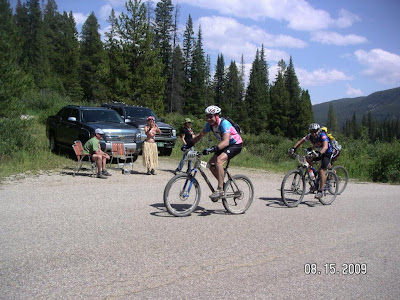 A crew lady showed up and assisted a couple riders - I'm not clear on whether this is legal or not (it's not for the 100-mile run next weekend) since I didn't study the rules for this race. But she was really nice, and helped a couple people she didn't know as well. 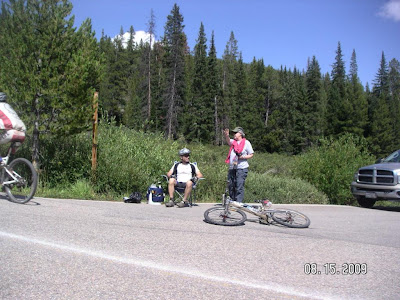 Our biggest problem was that we were unaware of an aid station that apparently existed at the top of the next climb. People started asking us about it and we couldn't give them a good answer. We finally got confirmation from someone's family who had just come down from there. Odd location for an aid station - at the top of the last big climb instead of at the bottom just before it. 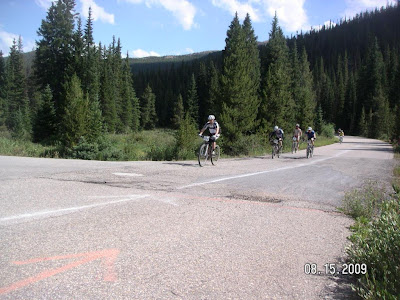 Our excitement for the afternoon was watching several guys try to start the next climb to find they were out of energy. Two men stopped at the pull-over above us and decided to take a nap (the first one lying on the ground may have influenced the second one a bit later). John brought jackets up to keep them warm. At one point there was about 5 riders hanging out up there, but one by one they got up and slowly left, including the two sleepers. We heard they finished within the 12-hour cut-off. Congratulations!

After it was clear that the last few riders were not going to make it in 12 hours, many riders kept going anyway, but some had had enough. One group reported a guy having trouble over on Sugarloaf, so we got to converse with Search and Rescue and a sheriff while the guy finally rode up and announced he was feeling a bit strange. His wife picked him up, and hopefully he turned out OK.

More riders pulled over to stop. We gathered a crowd of bikes and guys, and luckily 2 had phones that worked (thank you, AT&T). A couple pick-ups later and we were left with 2 bikes and 2 guys, which we could fit into the truck for transport back to town. I'm impressed with everyone who started, rode as far as they could (especially in the nasty weather), and showed courage in the struggle.

We saw the awards ceremony this morning and got to cheer and clap for the winners, Rebecca Rusch and Lance Armstrong. Dave Wiens got a huge ovation for his second place effort. Lance gave a nice speech about having come in second last year at this race, and learning that it was OK that he didn't win. He related it to the Tour de France this year, having tried hard but coming away with third place. He seemed pretty stoked to win Leadville this time. He said he would be back next year and then said something about doing the 100-mile run too... and immediately added something about just kidding (but wouldn't that be neat?). 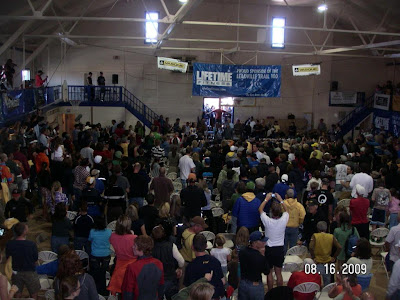 Glad to hear yous are are having a fun time up there. BTW here is the blog of the Guy John rescused.