We've slept a whole bunch and we're finally back to the land of the living...

But I only have time for a quick post because we're going to start our volunteer week for the TransRockies stage race this afternoon. Luckily those racers are coming to Leadville today, so we don't have to travel until tomorrow morning. More on that later.

For now - we finished! I'm a bit sore and mostly relieved. I was well ahead of the cutoff times throughout the race, which gave me some space in case I ran into major problems. And while I didn't hit any major walls, I did lose every bit of climbing legs that I thought I had. This happened going up Hope Pass the first time, and a bunch of people passed me while I struggled to maintain some semblance of reasonable pace. The downhills went GREAT and I passed a bunch of people every time (many of them the same people who walked by me on the way up). I got to know one group of guys really well because we passed each other time and time again. So my overall speed was fine, but I didn't look forward to the hills.

It's hard to say what happened there - it was pretty hot for this area (in the 80's) and I was somewhat dehydrated, but I think I had enough calories and electrolytes from the SPIZ and Ensure. Certainly we are not heat-acclimated, so that may have contributed. Maybe I started too fast. Maybe I need more hill training. Maybe the altitude affected me. Whatever the case, whenever I tried to walk uphill, my breathing increased beyond normal and then I got nauseous. John reported having similar problems.

My main motivation turned into "finish before it gets hot out again", and it was plenty dark and cool for the last several sections of the race. I really enjoyed running in the darkness, listening to music on my iPod, knowing I *should* be able to finish this thing. I speed-walked the last several miles up the Boulevard and into town as the sky turned from black to gray, finally crossing the line after 26 hours, 38 minutes, 56 seconds. Yay!

John started out super-fast but also lost his climbing legs and eventually had to walk most of the last 2 sections. He finished in 24:45 (and no, neither of us came anywhere close to finishing before Team Vignette won at No Sweat!!). Well done, John - and Team V!

I'm looking forward to sending in my Hardrock 100 application next year, and John is swearing off 100-milers for good (again)...

Some photos courtesy of Ryan and Kelly - thank you!

I was happy to make it back to Twin Lakes after surviving two crossings of Hope Pass: 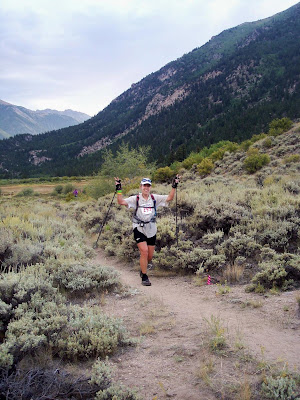 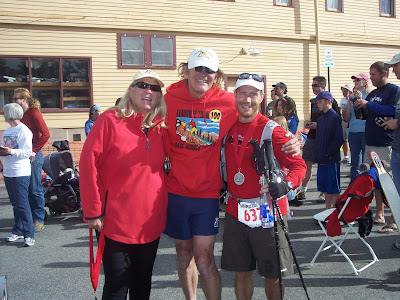 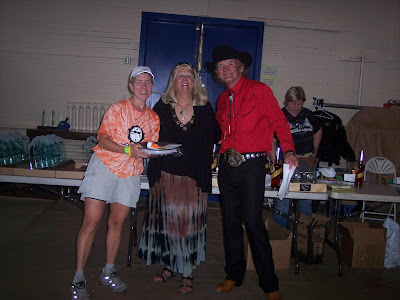 Special thanks to Brandi for stepping in as impromptu crew lady for me at Twin Lakes and May Queen - that was a huge help in getting me through the aid stations quickly, plus it was great to see someone I knew who was rooting me on. She even took care of my wet shoes and socks without flinching - now that's an adventure racer.

Big "well done!" to Markus, who ran by me at incredible speed going UPHILL on the Boulevard to the finish - wow!

It was quite an adventure, and I plan to write a real race report eventually. For now, it's time to be play volunteer again while we recover and figure out how to get heat acclimated for Texpedition...
Posted by Marcy at 10:19 AM