I had been lucky enough to get to run the middle section of the course back in February in a training run, so I didn't have to think too much about what lay ahead. I figured if I were lucky I would get to Camp Roosevelt before dark, but after the first third I knew that wouldn't happen, nor did it matter much. When you know you're going to spend the entire night and into the next morning running, it takes away the pressure of trying to get as much done before dark as you can - you're going to see the same amount of darkness no matter what.
I walked out from Elizabeth Furnace aid station behind two tall guys, and John made me laugh by flexing his muscles to imitate the guy immediately in front of me. It turns out my crew had dubbed this runner "Muscleman" which made perfect sense to me. The guys went on ahead, as was the custom for anyone leaving an aid station with me and then climbing a hill.
Eventually it was back to the quiet of the forest as the sounds of the aid station below died away. I was happy without a pack on my back for this short section, and eventually I made it to the top. The run down the other side was smooth and uneventful, except that I passed a blonde named Susan near the bottom. We ended up going back and forth for the entire rest of the race, and I managed to restrain my competitive drive the whole time, which rather amazes me.
[Aid station 6: Section rank = 71, Arrival place = 105 - that was a big jump]
Hello again, friendly race photographer! 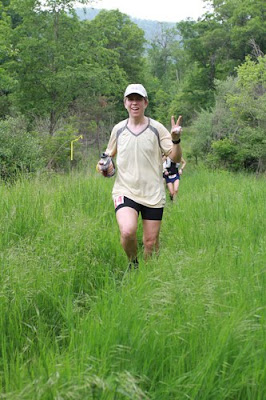 Apparently I was in really good spirits here! Yep, that may have been my favorite section. 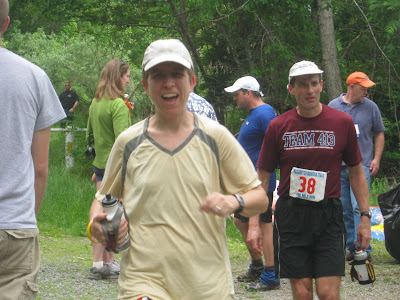 Pack back on - and love the duckies! 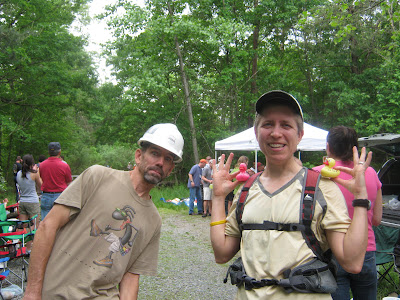 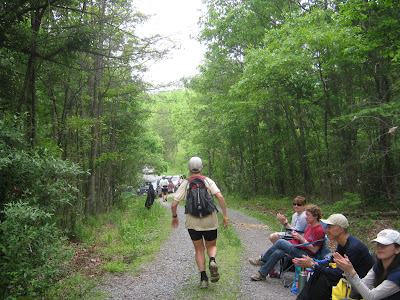 I wasn't looking forward to the upcoming road sections, so I put my iPod on and listened to podcasts to pass the time with Click and Clack and Wait Wait Don't Tell Me.
Partway along, a car pulled up behind me and look who's here! My crew was being adventurous and/or following the GPS that told them they could cross the river this way (apparently true!). John popped up to take a picture: 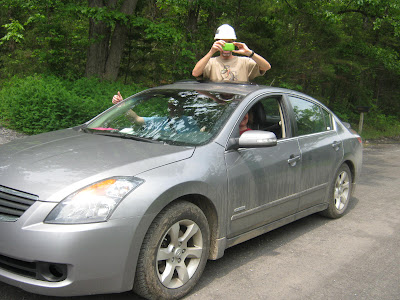 And I got them to hand me a camera to return the favor :) 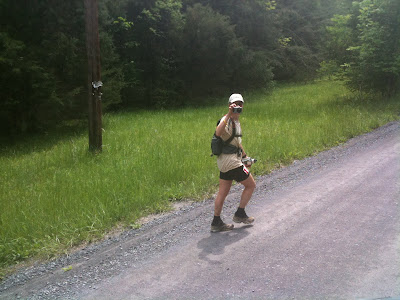 It was great to see them having fun - and later I got to share vicariously in their quest for some treats: 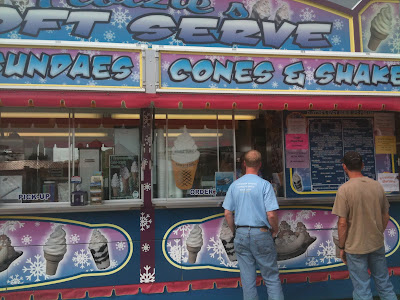 Apparently I was climbing the mountain in the background right about this time - too funny! 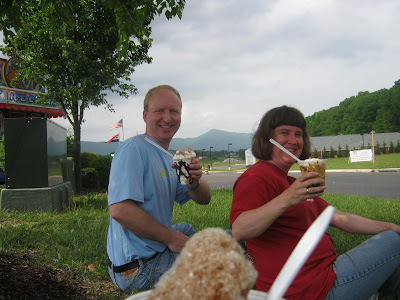 Anyway, back to the less exciting stuff. The first road section ended at aid station 7, where I sat to drink an Ensure and load my pack with a couple Spiz baggies from my drop bag.
[Aid station 7: Section rank = 99, Arrival place = 105]
It was getting hot all of a sudden. At least we had shade part of the time, even on the road. But everyone was sweating and starting to feel the heat. I had to really control myself up the next climb to keep my heart rate from going way high, so I took careful steps as the climb got steep and tried to maintain a decent posture. Finally at the top, phew.
The ridge was much better, with a wonderful light breeze coming across. This section of ridge has a ton of long-ish ups and downs and seems to go on forever, but I knew that and I had my earbuds in, so I just settled in and got moving.
The only part that threw me for a loop was a section that I must have done incorrectly during the training run. The trail apparently goes along the eastern side of the ridge on a narrow, steep path that I did not remember at all. Climbing over boulders and working my way along, I had to constantly verify the ribbons marking the course. Oddities. Finally it merged with the trail that I must have followed around the western side of the ridge last time, and I was back on familiar ground.
Then there was the purple trail heading downhill, yay! I eased on down the steep stuff, then ran down the gentler stuff to the aid station at the road.
[Aid station 8: Section rank = 106, Arrival place = 104]
No crew allowed here either, and in fact I had already mixed my second Spiz and still had enough liquid in my bottle so I just walked through the aid station. But not before I got to pet the sweetest German Shepherd who thought I smelled interesting. I can imagine!
I was pretty sure I was going to smell really rank by the end of this thing. The woods were dank, dark, and deep, but I had promises to keep, and miles to go before I sleep...
Another road section, more "zone-out" time with the iPod. I ran in the sun and walked in the shade. Blah. Just keep on keeping on.
Eventually there were signs of life - people walking on the road telling me the aid station was just ahead. Nice!
[Aid station 9: Section rank = 44 (really?), Arrival place = 100]
Hi John! Here's my bottle: 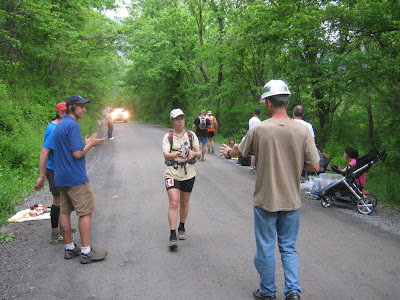 It was awesome to see the gang again, and great to know that I'd see them at almost every aid station from here on out. They told me that they had pizza with them if I might want some now? Heck yeah! Ham and pineapple, baby! 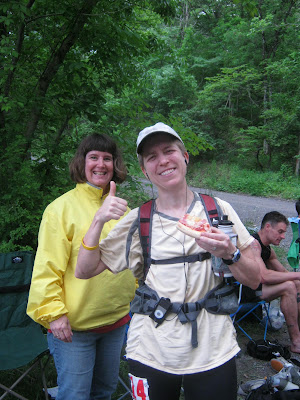 I would have loved to stay and chat, but the mosquitoes were really aggressive near the river, so I had to move out. It was still quite warm, so I left my jacket with them for one more section.
Walking out with John: 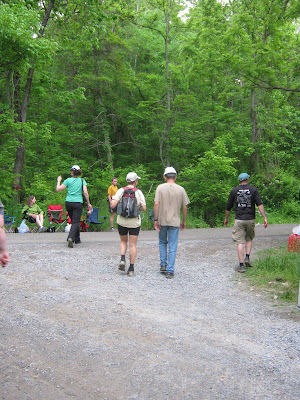 The next section started with a big climb, and I was glad to be familiar with it since it seems to end partway up but then keeps going. Not long out of the aid station it finally started raining, and it seemed like it might turn into a downpour. I pulled my thin poncho out of my pack and tried to get it to spread out and over my head before the whole endeavor became pointless. I sort of succeeded. The coolness of the rain felt great, but I didn't want to get super soaked right before dark. Especially when absolutely nothing was drying that day. I miss the desert.
Anyhoo, back to reality. I made it to the ridge and followed it for a while, this ridge section not being as long as the last one. Then there was the trail down the other side, which I remembered being long and really windy and taking forever during the training run. Luckily I have Paula Poundstone's book on my iPod, so I mostly just laughed and followed the trail wherever it felt like taking me.
It got dark. I got out my backup headlamp and carried it to light up the trail in front of my feet. The rain stopped and I stuffed the poncho back in my pack. There were a couple wet, muddy spots, but nothing too terrible. Plenty of rocks, per usual on this course. And Paula continued to humor me.
I was actually surprised to walk into the parking lot of Camp Roosevelt! I had pictured the aid station being right there, but it was all dark and we had to go a short ways down the road to the actual aid station. No matter, I was just glad to be there. I clicked my headlamp to the red light setting and back to white a couple times, and John jumped out of the car to greet me - Hi husband!
[Aid station 10: Section rank = 93, Arrival place = 94]
Ready for action: 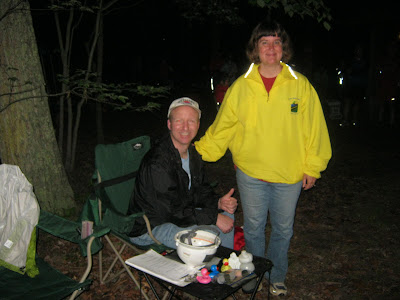 The duckies seem fond of me: 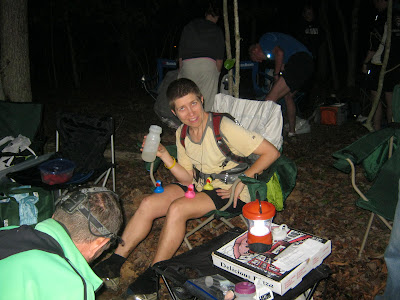 Well, that went OK! Only one more third to go. And it would be a long one.