The Massanutten Mountain Trails 100 Mile Run:
I've never done a 100-miler as a training run. There's a first time for everything! I have also gained valuable experience with every race I've run this spring, and the Massanutten 100 would be no exception.
There was one exception for this race, however - my wonderful crew! I looked forward to seeing John, Kathy, and Bob in every aid station, listening to them cheer and helping me with everything I could need or want. I don't know how they managed it, but it was never raining when I came into a crewed aid station. Now that is a talented crew.
I decided to run easily for as long as possible, play it by ear, see if it helped the later miles if I started out without pushing. Particularly, I kept my heart rate low-ish on the uphill climbs and I was gentle on my knees on the downhills. I called it when I mentioned I was most concerned about blisters due to the weather (muggy and forecasted to be rainy). I tried running on softer surfaces and staying off the rocks whenever I had a choice. But as you may be aware, Massanutten ROCKS and you can't avoid all of them.
Not-so-bright and very-early (4 a.m.) start: 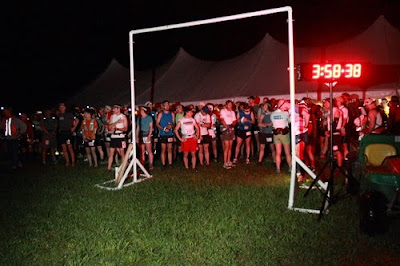 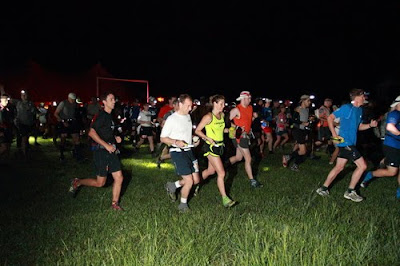 I'm somewhere behind all these folks, just moseying out to the road: 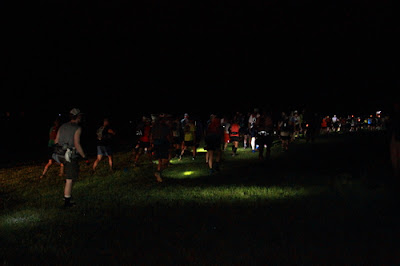 There was no rain for the start, yay! I followed everyone up the first road for 3 miles, taking it easy at a fast walk and listening to conversations around me. The highlight: "When I go slower I don't puke as much." I assume she meant later in the race.

I filled both bottles at the aid station at the trail turn-off, preferring to take a little extra time in lieu of carrying more weight up the first 3 miles. Looking at my watch, I could not even believe that it had taken me one whole hour to get there. I think there were 2 people behind me at this point.

Time for some trails! I was ready - especially when I started calculating pace and wondering about the cut-off time at the next aid station all of a sudden. I didn't expect to be bumping against one so soon. That got me moving. I started passing people, still not climbing too quickly but moving well over the rocks and up the trail.

It was dark for a long time. I used a tiny micro-light that wasn't enough for this first section. Even at the top of the ridge as the sky seemed to be getting slightly brighter, we were stuck in a fog bank that made it hard to see for a while longer than expected. This section was pretty rocky but I expected worse - and I'm sure it was worse when it was near the end of the race before the course was changed up.

I followed a couple folks, and one mentioned that it was better that her mother wasn't crewing her because she would be trying to convince her to quit at every aid station. Such a concerned, caring parent - but I don't think I could handle that either!

A whippoorwill was calling in the early morning darkness, very pretty and slightly eerie through the fog.

I passed a few people and then fell in behind a long train. That lasted a while before I was able to pass everyone in the train, but the last several stepped aside all at once to let me go. Thank you! Another guy followed me and we chatted on the nice downhill run. He had gotten very little sleep because of a cricket chirping all night near his tent. Our cabin didn't have any such problem, thank goodness.

Down the Edinburg Gap and my crew, yay! The duckies from last year's July 4 duck race made their first appearance - too funny, I didn't expect that! John was repaying my "duck on the trail" antics from last year's Hardrock. Drink, drink, reload, go! Oh, and I made it well within the cutoff time and didn't have to think about that again for the rest of the race, so that was nice.

After passing a bunch of folks on the previous flat and downhill, most of them came by me on the next uphill. This would be a pattern for the race. Even when I work at it, I'm slower on the uphills compared to folks around me. And I wasn't working at it today.

Hi to the nice photographer hanging out in the woods! 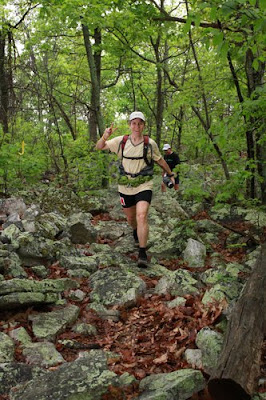 Then the ridge - and most people disappeared, either ahead or behind, and it was calm and quiet running for a while. Just stay as comfortable as possible for as long as possible.

Toward the end of this section there was a big opening in the trees where we could get a good look at the inside of the cloud that covered us all morning. Who needs actual scenery? The trees and azaleas sure were pretty, anyway. And the flowers smelled great.

And it wasn't raining (yet)! The forecast was much worse than the actual for the first half of the race. Certainly it was humid, but it was nice not to be soaking wet.

A really nice volunteer helped me with my drop bag at aid station #3. I couldn't remember the elevation profile for this next section, but was pleasantly surprised that it was pretty much flat. We ran on one side of the ridge for a while. Then we ran on the other side. My feet noticed a difference from one side to the other, with a couple hot spots starting but only in very specific spots that I didn't feel unless I had to run over a bunch of rocks for a while.

You can usually tell when the Massanutten Trail makes a definite turn in the downward direction off the ridge, as opposed to the little ups and downs all along the top. This one was a steep drop where I took it easy, passing only a couple of folks including a guy using trekking poles. I would have liked my poles but decided it was better training without them this time.

Aid station #4 was un-crewed but we were really taken care of - I even tried some scrambled eggs and almost went for a pancake but decided to drink my Spiz instead. I got to demonstrate the Spiz-drinking-from-a-baggie method for one of the volunteers who is also a runner. That's always fun.

Walking out of here there were a bunch of folks around me who were mostly going slightly faster up the road. No surprise there. Eventually I came to the steep climb up and over a narrow ridge. Taking it easy, this went really well and the top appeared sooner than I expected. Can't argue with that.

The other side was one long downhill run to Elizabeth Furnace. OK, first there were a few rocks to deal with, but then it turned into an awesome, winding, gentle trail. I loved it. The sun was even shining, and I was about to see my crew again. I missed them. I could get really used to this crew thing.

Bob hanging out at Elizabeth Furnace: 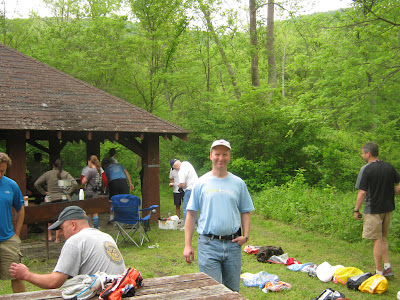 Kathy can do selfies too! 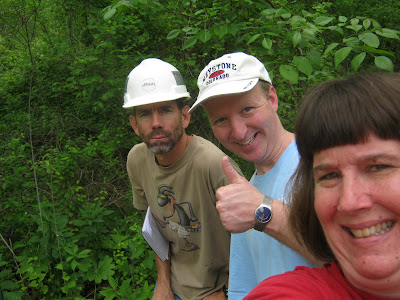 Running in along the creek: 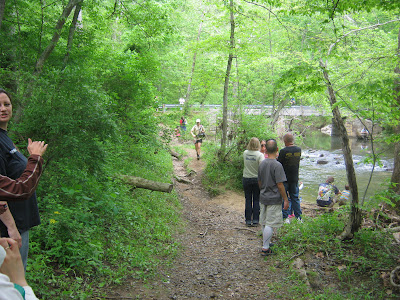 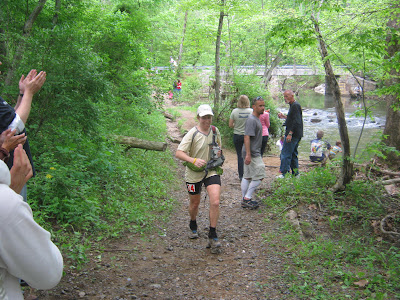 Hi guys! I was happy to drop off my pack and just carry a hand bottle for this next section. I gave John my hand bottle to prep, I gave Kathy my pack with a couple of instructions, and I turned to Bob and asked him to bring the Powerberries to the next aid station. He looked at me like he had eaten them all and couldn't believe I was asking for that particular item. Actually, he just didn't know what I was talking about (apparently Kathy and John had been hiding them).

Here we are the day before the race, modeling said Powerberries - an awesome Trader Joe's creation of dark chocolate and various types of yummy berries: 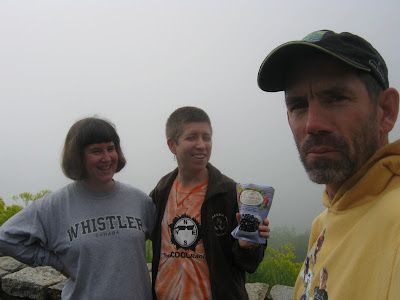 Well, the first third of the race went well - just running within myself and enjoying a day without rain (so far).