Scenes from southern Idaho - part 1 of 2

Although we're now a couple states away, here is a look back at some scenes from our recent time exploring southern Idaho.  It's not a place that was on our radar, until we starting looking at the map and finding things to check out.

For example, the beautiful bridge over the Snake River at Twin Falls: 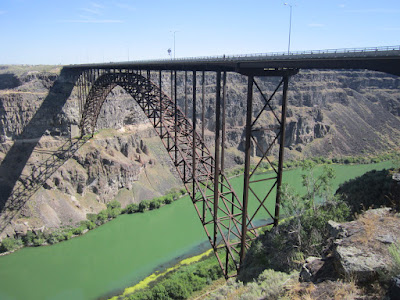 Quite the scenery along the river gorge: 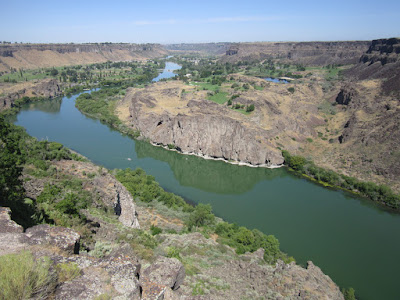 And BASE jumping is legal from the bridge!  We didn't know that when we saw a couple guys jump (tiny parachute sort of visible in this photo) and we were wondering if they were going to hurry away to avoid the authorities.  Nope, totally legal!  And there are companies that do tandem jumping!  Didn't quite get the beta on that for John to try it, maybe next time! 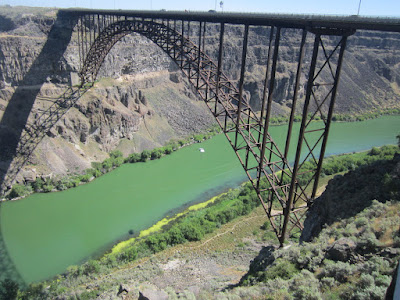 Statue near the bridge: 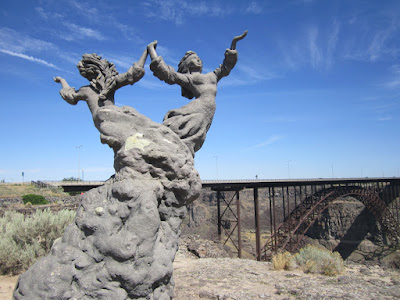 Memorial for Evel Knievel who attempted to jump across the Snake River near here on a rocket-propelled motorcycle.  He failed when his chute opened early, but at least he was OK.  Kinda crazy... 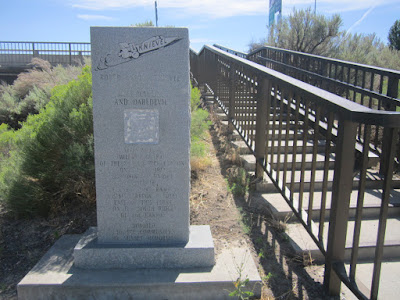 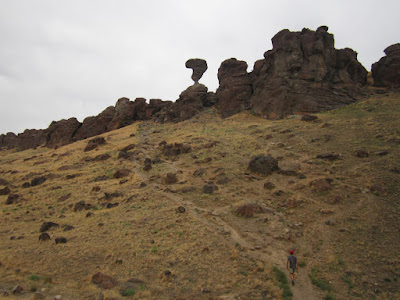 Close up look from up top (with our truck down in the background): 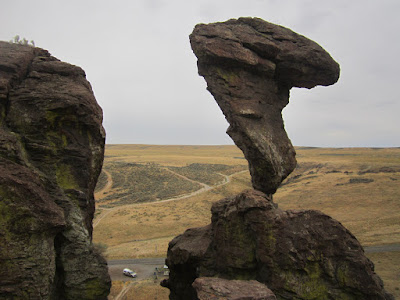 Just perched there, who knows how long that will last: 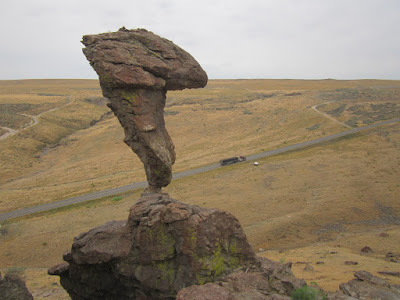 Looks like a drunk line painter, but apparently this was to warn about an approaching intersection.  Sure got our attention: Shoshone Falls, very pretty!  In the spring there is even more water (before they start diverting for irrigation), still quite a sight: 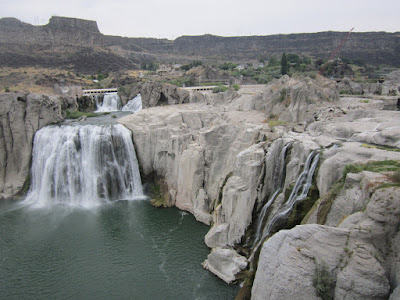 Downriver scene as we started a nice little run on the park trails: 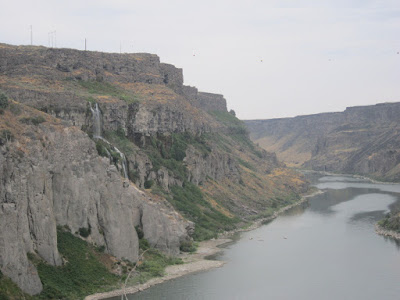 The Evel Knievel jump site - too funny!  Here's the view he would have had before taking off: 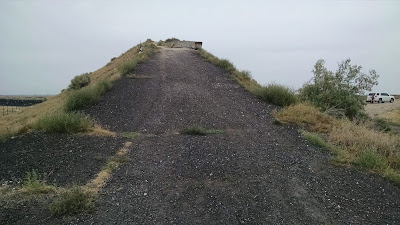 The wide canyon across the Snake River: 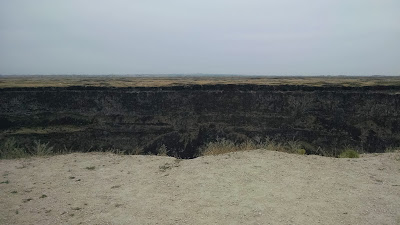 Side view of the jump hill: 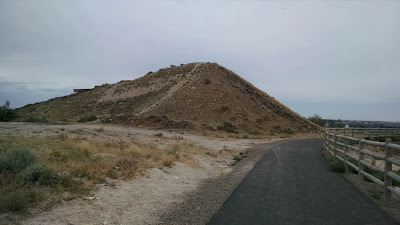 And trying to get the whole picture (it's worth checking out in person if you're ever in Twin Falls): 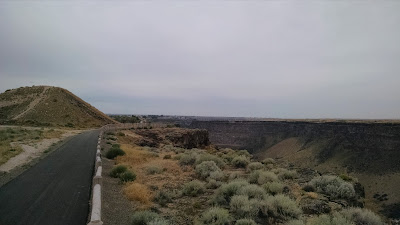 Looking back toward Shoshone Falls: 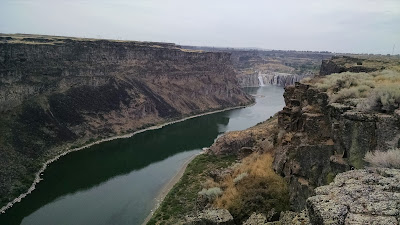 We did another excellent run at Box Canyon.  Here's John looking over the top of the canyon, a wide bowl with a rocky drop-off: 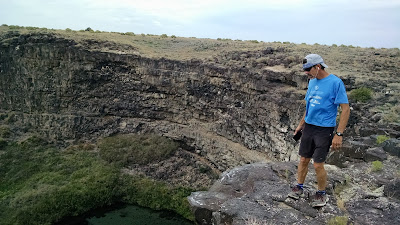 This water just came out of the bottom of the cliff!  Must be a super-large springs coming out of the aquifer.  This aquifer covers the huge plains area that includes Craters of the Moon (and probably drains from Borah Peak), pretty neat to see it all from top to bottom in our travels: 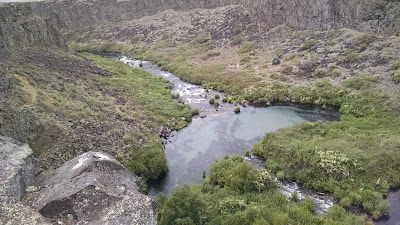 Part of the extensive canal system that is used for irrigation and the like: 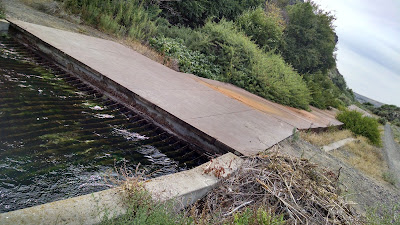 Nice clear water in the canyon: 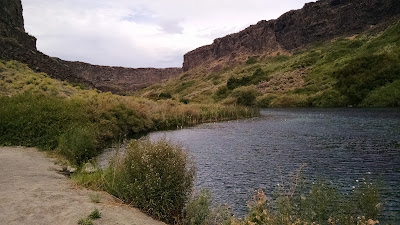 John thinking about swimming?  Or just checking out another little springs flowing out of the rocks across the way: 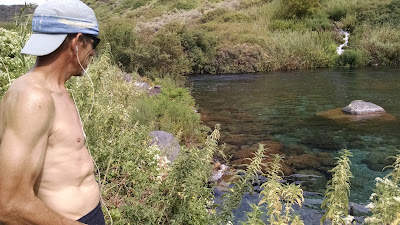 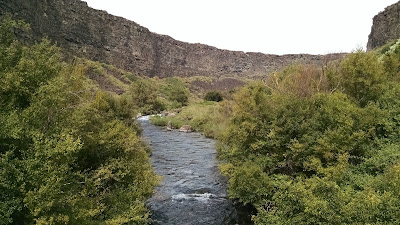 And an excellent waterfall that we could see up close: 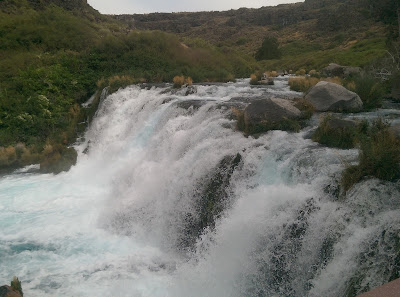 Malad Gorge, another huge canyon with water coming out of the rocks from seemingly nowhere, pretty dang cool: 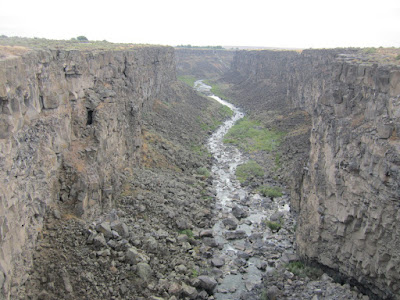 Pretty waterfall right under the highway: 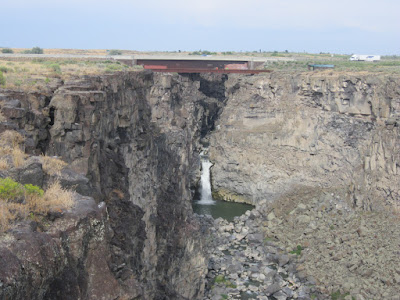 More pictures to come!  Maybe not today, but eventually  :)