In the interest of catching up on belated blog posts, I'm going to attempt my shortest race report ever.  Not sure I will succeed, but here goes...

John and I were looking for a race in Utah, and we had heard that the Speedgoat 50K was scenic and quite challenging.  Plus it's directed by Mr. Speedgoat himself, Karl Meltzer, so we were curious to come see what it was all about.

What made it difficult: Lots of climbing (over 11,000 ft) and some of it steep and a bit of it off-trail.  Elevation (much of it over 9000 ft), which we were partly but not completely trained for.  Heat of the afternoon, tempered by water on my head from cold mountain streams.  Rocks and difficult footing and steep dirt in places.  At one point on a long stretch of downhill that was covered in rocks of all kinds, a fellow racer commented that it was like being put through a cheese grater.

What made it great: Wildflowers!  The most we had seen all summer, tons of different colors all at once.  Beautiful.  A fun course on mountain bike trails and hiking trails and jeep roads and "not a trail" sections up and down the sides of hills and mountains.  Spectacular views off into the distance, at least when we took a break from watching our feet to stop and look around.

The best part: Traversing a tunnel through the mountain!  Totally unexpected (although the aid station next to it was called "Tunnel"), totally cool - and chilly inside, awesome, what a blast and a wonderful surprise.

Special thanks to: The volunteers, everyone who served up cold water and ice and fruit and pickles and cheese.  I even got to chat briefly with Roch Horton and listen to him play a song on his boombox featuring Karl singing and playing the harmonica.

Something different: Not knowing the course much at all going in.  I couldn't get the Google Earth "flyover" to work so I just printed the elevation map.  That was actually the most helpful, understanding how much and how big the ups and downs would be.  It was fun trying to figure out where we might be going next, especially as the course criss-crossed the upper part of the ski area, down the backside and back up, across to another peak, down and through the tunnel (so cool!), way down and way the heck back up again and along a pretty ridgeline (ugh, the last big climb was a doozy).

One last challenge: In the middle of the last big downhill, well first there were these crazy mountain bikers coming down one of the "not a trail" sections straight down the mountain, that was nuts.  Anyway, after that there was one last hefty little multi-pitch ascent that was most definitely NOT on the elevation map.  Karl promised to fix that on the website for next year.

How we did: We finished!  Both of us climbed well for much of the race, I even surprised myself by passing more people on the uphills than the downs.  There were some pretty awesome technical downhill runners in the race.  Impressive, especially near the back of the pack where I was running.  Both of us were fairly out of gas by the last big climb back to the peak.  At least it was only a 50K, even if our times were more like for a 50-mile race.

John caught me on film heading to the finish line: 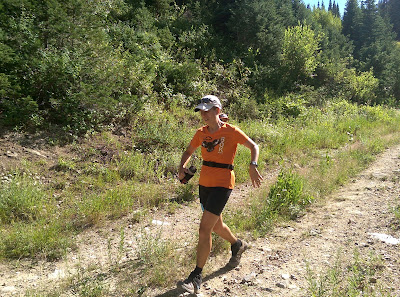 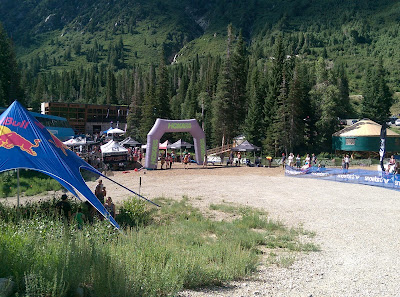 Final thanks: To Karl Meltzer for an awesome race and it was so great to meet you at the finish line! 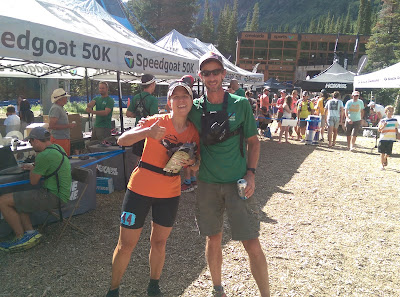