So excited to have a National Parks pass again!  Have card, will travel: 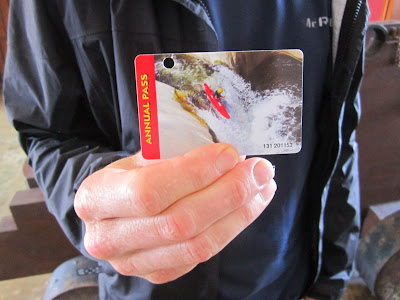 The first event was a tunnel tour at San Cristobal (I like to call it "Fort Crystal Ball").  Our ranger told great stories that kept us entertained, and we enjoyed the history lessons and the explanations for why the fort was built the way it was.  San Cristobal was built to defend against enemies approaching by land.

Our ranger working on a history lesson: 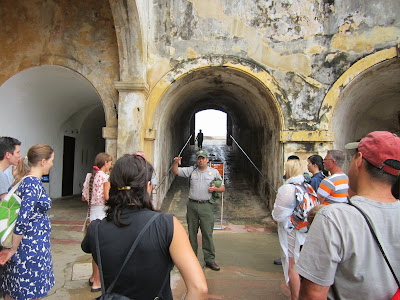 Here is the normally-locked door to a tunnel that is not accessible except during this tour.  It was really dark in this small tunnel, quite an adventure proceeding down it to get to the little portal hole to see the sea outside.  Not easy to take pictures of the tunnel other than this one: 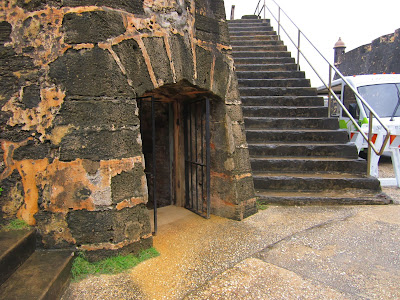 One of the many iconic towers of the forts (as also seen on Puerto Rican license plates): 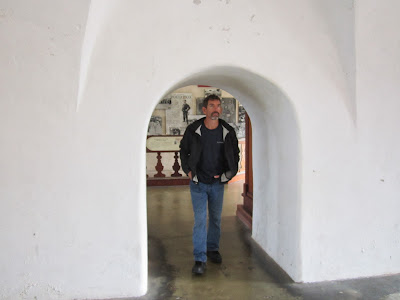 A look over toward town from inside a defensive position: 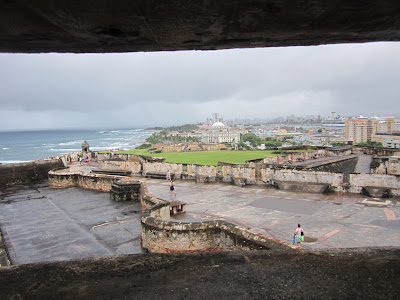 A break for lunch at the farmers market - one of our better local meals: 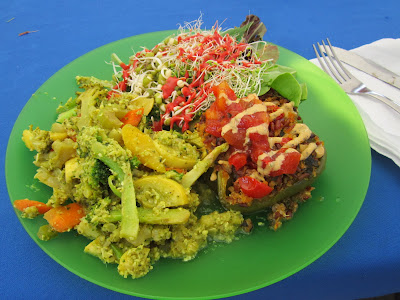 Next we cruised over to the El Morro fort, where the focus was on defense against naval invaders.  The top deck of the fort is large, with good views: 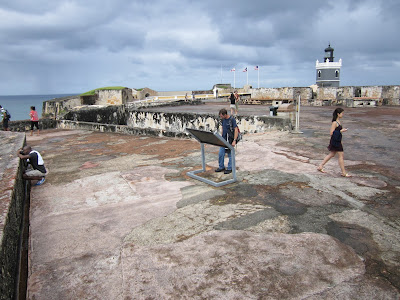 Checking out the great lawn from on top of El Morro: 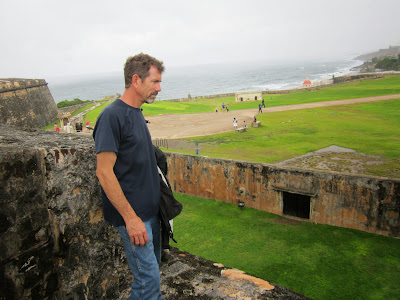 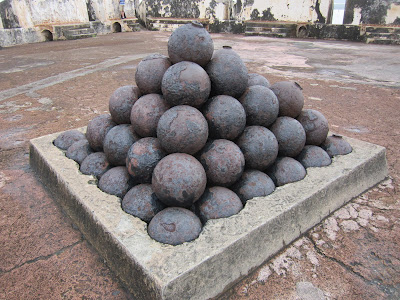 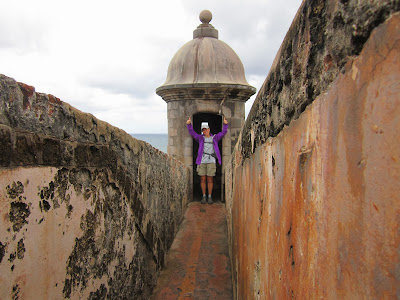 Next up was a tour of the El Morro lighthouse.  It's obviously much newer than the rest of the fort.  The lenses are apparently original, even though the tower has been rebuilt at least once. 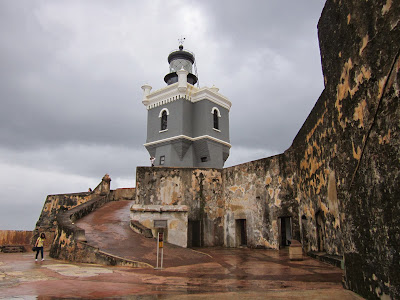 Cruise ship watching from the fort: 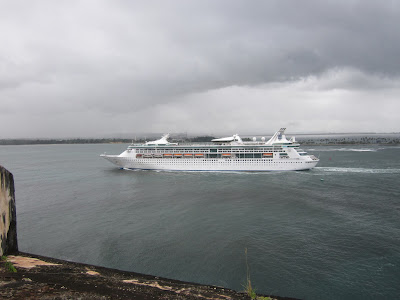 Can't get enough of the scenery.  Also - views of the dark clouds that dropped rain on us off and on all day: 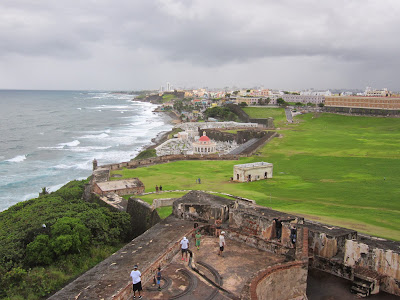 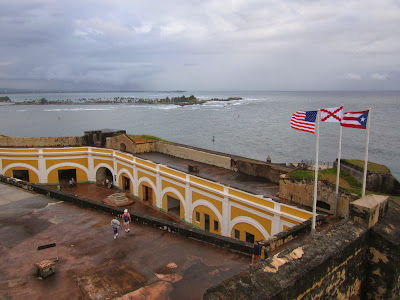 We were really lucky that the rain held off long enough for our group to get a tour of the walkway at the top of the lighthouse! 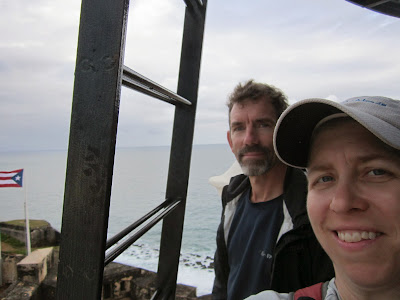 Checking out the Fresnel lenses: 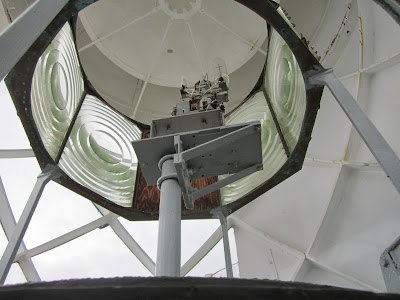 Back to San Cristobal the next day for a "wall walk tour".  This time we walked way around the grounds to get a feel for what it might be like to guard the fort from various spots. 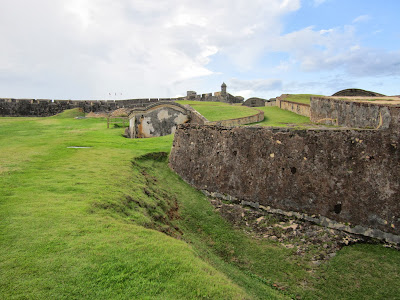 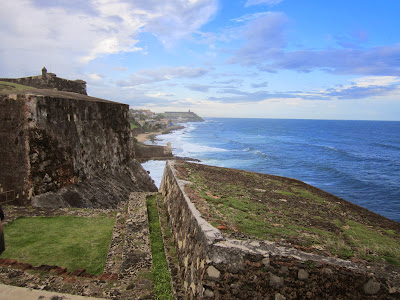 I got distracted by a couple shells that were trying to walk through the grass... 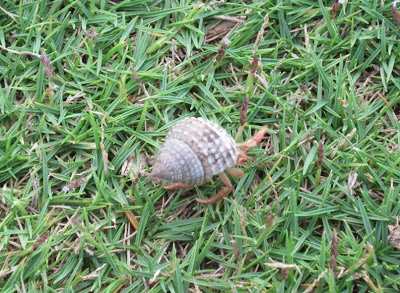 This one made it to a vertical wall and STARTED DOWN - it was fascinating watching it down-climb until it found a crevice and took shelter. 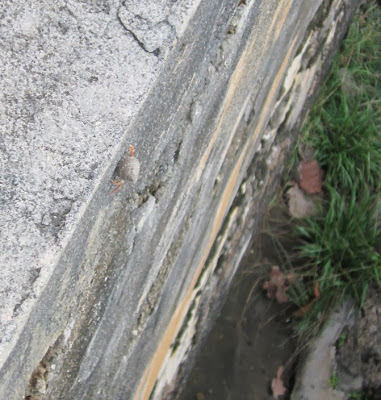 Another distraction - little leaves that close up when you touch them (and a bit of our ranger guide's voice in the background):
http://www.youtube.com/watch?v=bB0Ybt31lno 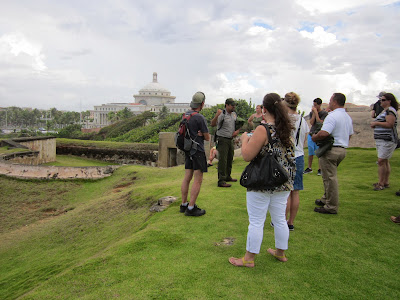 Iguana!  These guys were all over the trees and bushes. 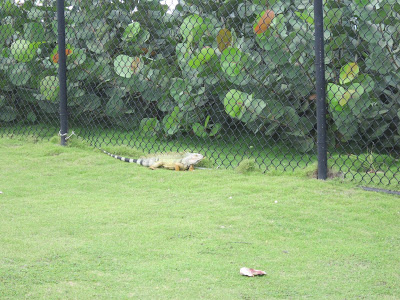 The waves were really crashing on the rocks down below.  It gave a good sense of why the San Juan bay was valuable for ships sailing across the ocean from Europe looking for a place to land and get fresh water. 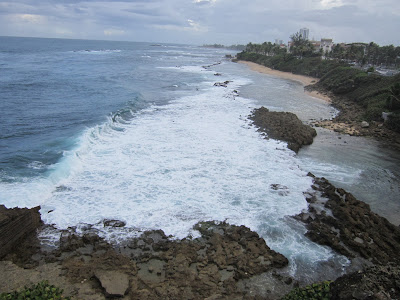 Another short video - a wave below San Cristobal:
http://www.youtube.com/watch?v=RxBMTk0HT-Q

Part of the defenses: 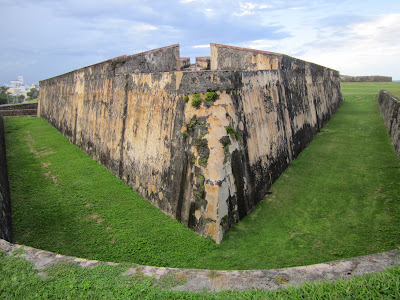 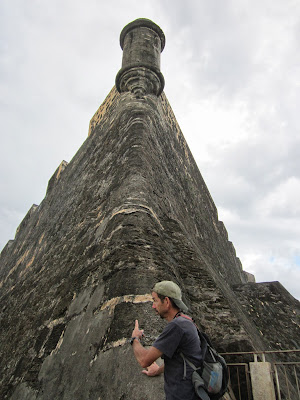 And one more view! 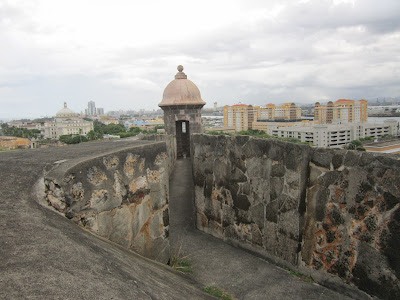 Totally unrelated, but while I was loading videos I found this one we took at Walmart in Puerto Rico - it reminded us of France, oddly enough...
http://www.youtube.com/watch?v=W9Lj5HT5vfY