Great Urban Race was back in Austin - and so were we!  Along with a bunch of friends, always more fun with friends.

Sheila helped us figure out our first destination, Uncle Billy's BBQ place on Barton Springs Road.  Before we could consider looking at bus options, we were running over the Congress Avenue Bridge and along the south side of the lake.

At Uncle Billy's we found a "rope the keg" challenge.  John landed his easily, but we both had to do it so he coached me with my lasso throws and eventually I got it.

Just for kicks, we carried around a plastic egg to get a sense of the "fun" that Phil and Peter must have had carrying around a real one in the Puerto Rico finals - the egg we wish we hadn't overlooked! 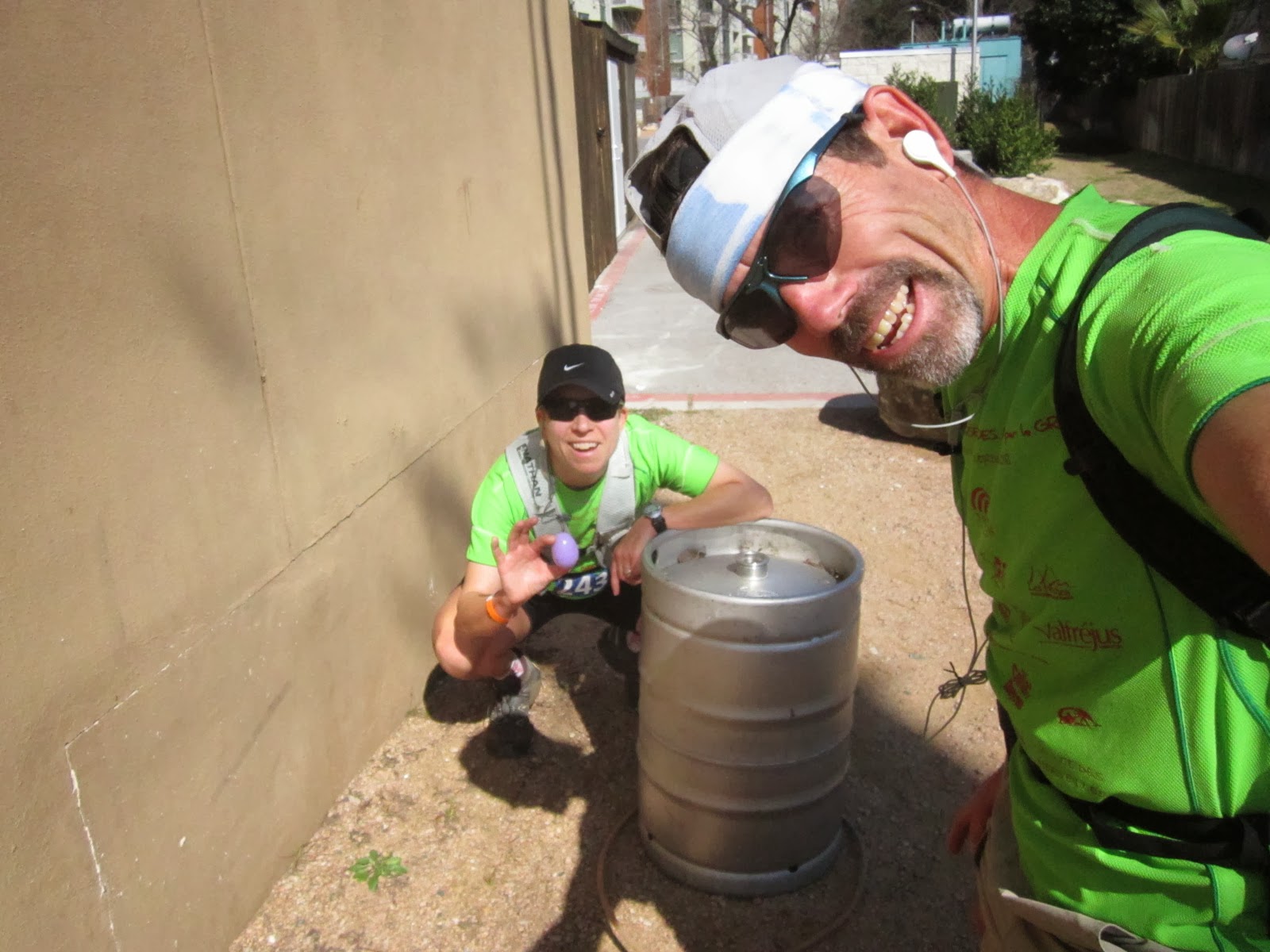 We saw a team leaving ahead of us, they must have found that bus we neglected to look for.  Except as we ran across the street we saw them getting into a cab!  We took their picture sitting in the cab, had a pointless and time-wasting discussion with them, and finally decided to focus on our own race instead.  We found out later that someone else had reported them and they confessed to breaking the rules.

Moving on... on the back patio of Flipnotics we were told to take a Vine video of us singing the "Bacon Song".  John looked up the song, we attempted to memorize a couple lines, tried to take a Vine video, promptly lost the video while working on the upload, and had to do it again.  The result of these efforts:
https://vine.co/v/MW7P5bJPuLt

Back across the river, we ran over to the animal shelter and completed an interesting challenge.  I had to hold a Downward Dog yoga pose (easy) while John strapped on a box of ping pong balls and had to bounce and gyrate around trying to get all the balls to come out of the small hole (not so easy).  Now THAT would have been a funny video!  There was lots of giggling involved, and not just from the volunteers. 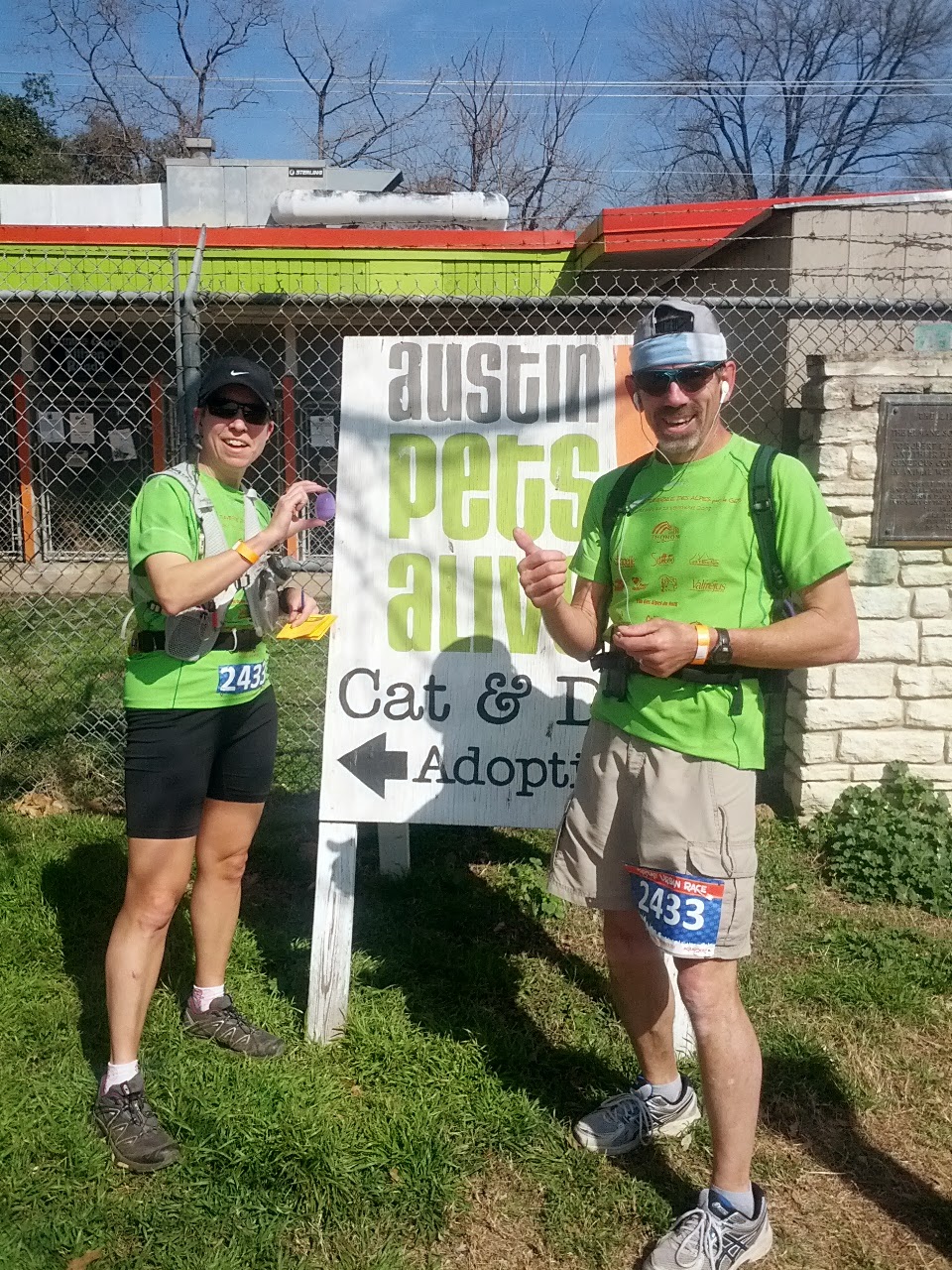 Sheila helped us figure out how to go directly north across the railroad tracks, and it wasn't nearly as difficult as Kip previously reported it to be.  Or maybe we got lucky in where we crossed.

We found the Bella Spa where we stood back-to-back, John with a mirror and one of us blindfolded (I can't remember who because the blindfold seemed kind of pointless), and me with a can of wash-off spray point.  John held a stencil over his hair while I felt around for the target and sort of sprayed it.  After three passes we called it good!  I may have gotten the most spray on my own hand.  We do not have a future career in backward head spray painting... 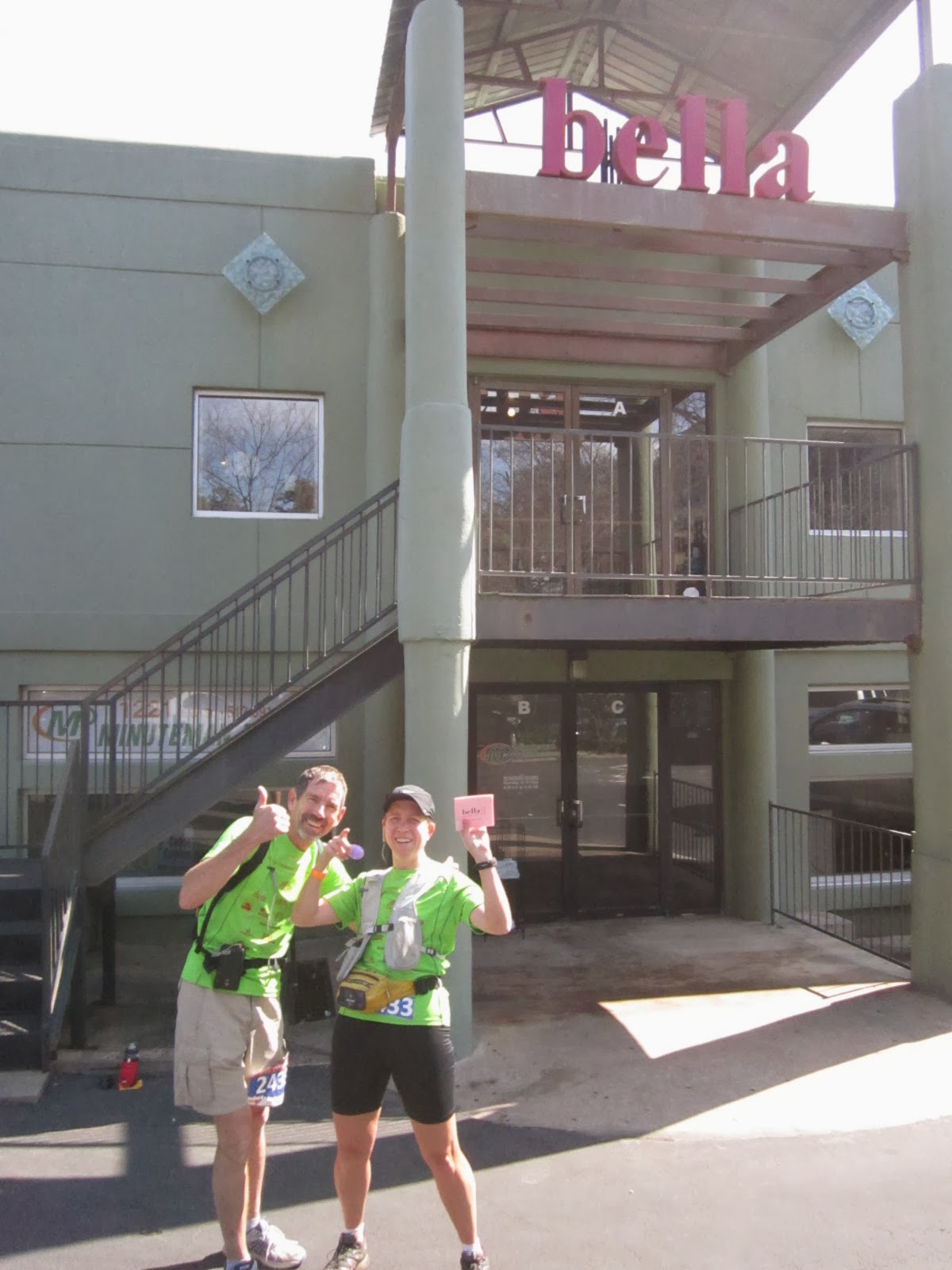 Just around the corner to Tacos & Tequila where we added our team name to the big St Jude's banner (missed the egg here - good thing it didn't matter): 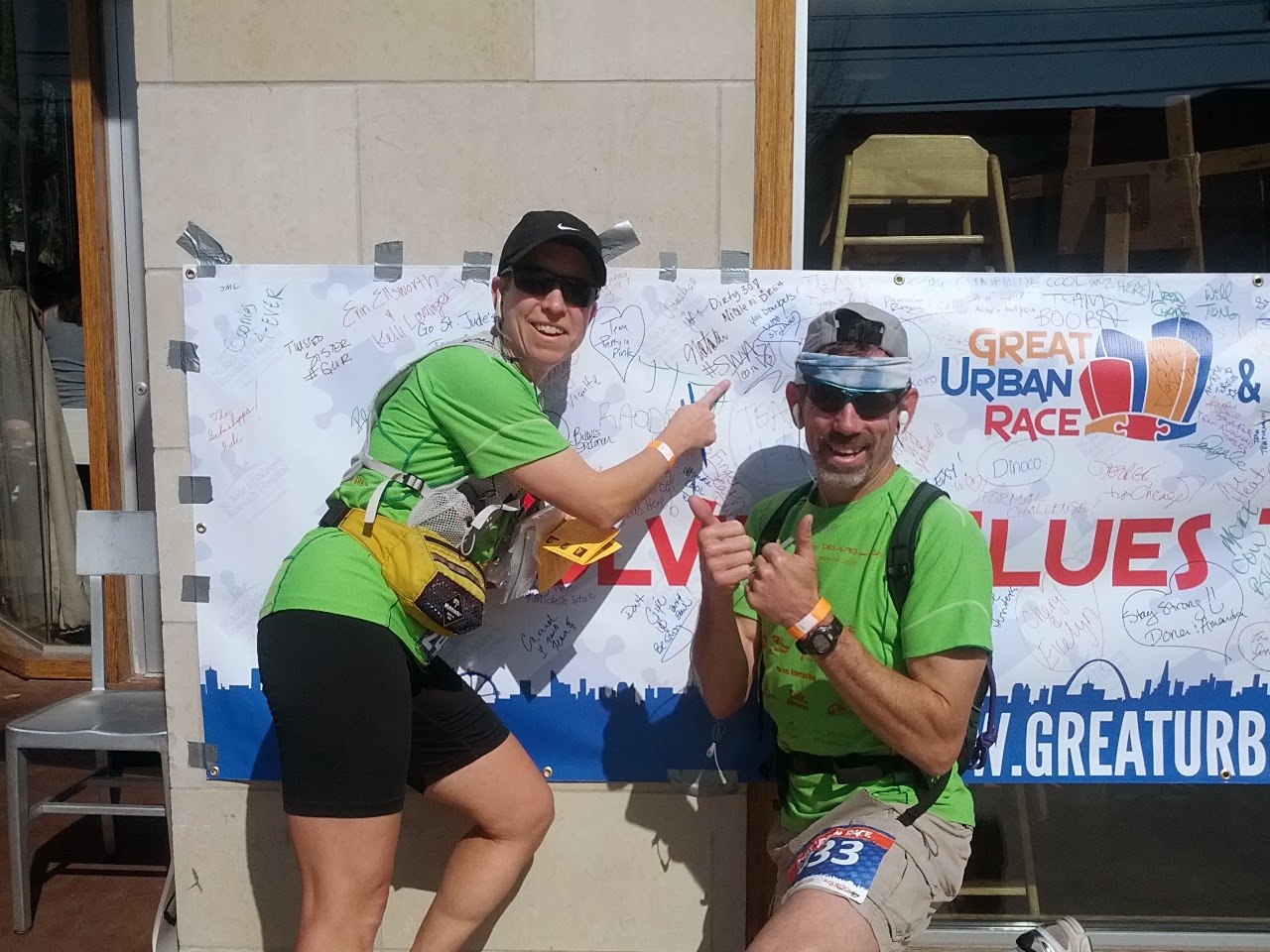 We worked on uploading the photo to Twitter as we ran east on 5th Street...

After a bit of a run we reached Wahoo Fish Tacos and went inside to find a "cup catapult" challenge.  I launched mini-marshmallows and goldfish crackers toward the ceiling to try to land one inside a bucket John held on his head.  I mostly hit the ceiling and completely missed the bucket.  When I finally got one it surprised me immensely.

Outside for our photo with the surfboard (and the egg back in play): 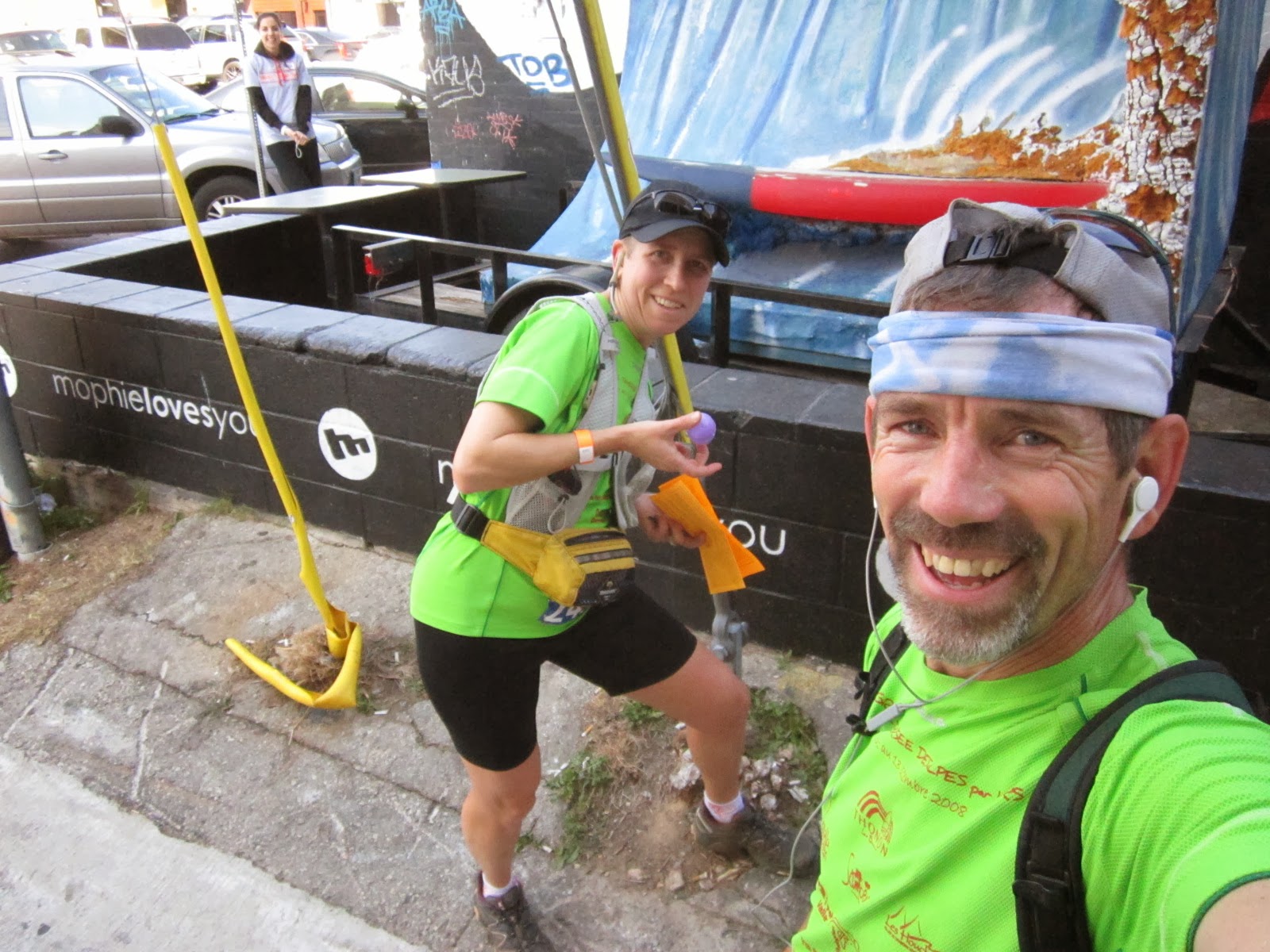 Next to Mellow Johnny's where John rode on a trainer bike (neat!) while we answered trivia questions about the shop and Lance Armstrong: 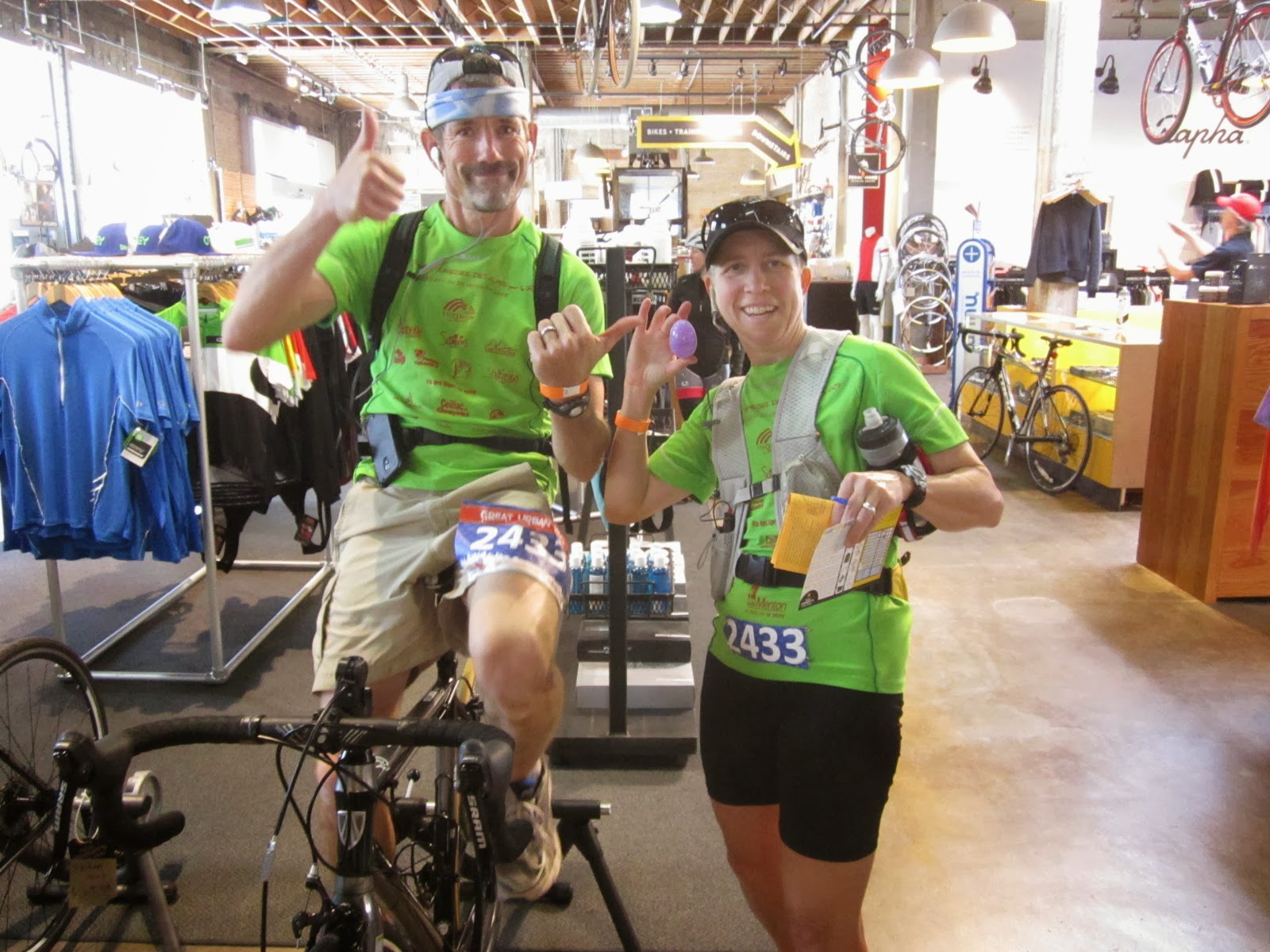 Running around downtown we spotted a food truck for one of our tic-tac-toe squares - line dancing in front of it.  The type of line dance was John's idea:
http://www.youtube.com/watch?v=WQuT3H8LqXI

Down to Toy Joy where we put little discs into a cup while wearing long plastic fingernails.  Our completion photo while sitting on a couple of Rody's: 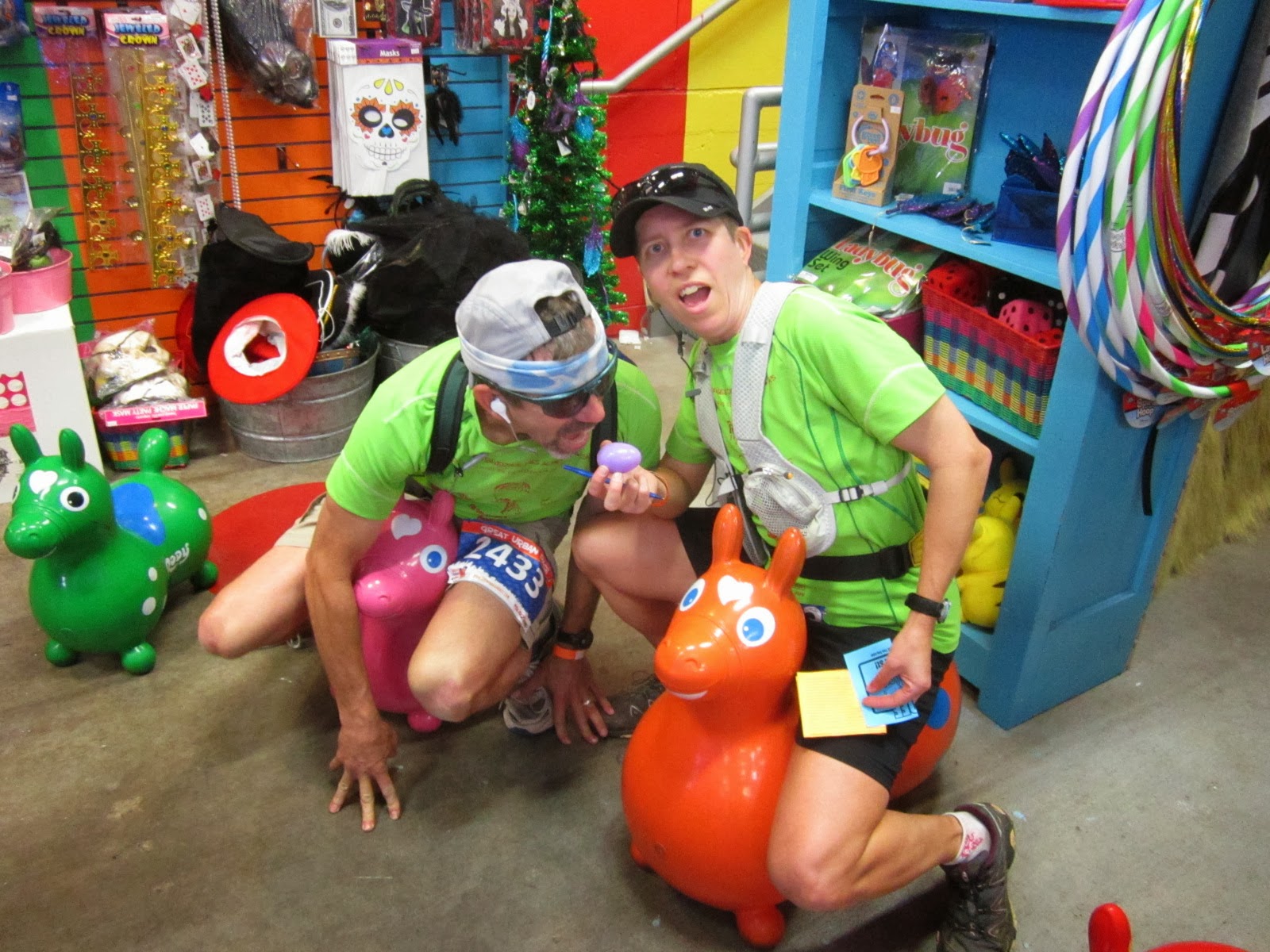 Another run to the east, including a short bus ride north on Congress (not sure how much that helped), getting off a couple blocks early to avoid the hill we suddenly remembered existed on 8th Street.  At Stubb's we did a "team communication" task where John was blindfolded and I instructed him on how to set up the barrel colors to match a pattern.

No egg again!  Maybe it's a good thing we didn't carry one around in San Juan... but we did manage to upload this picture to Instagram, at least we got the Austin-important part right: 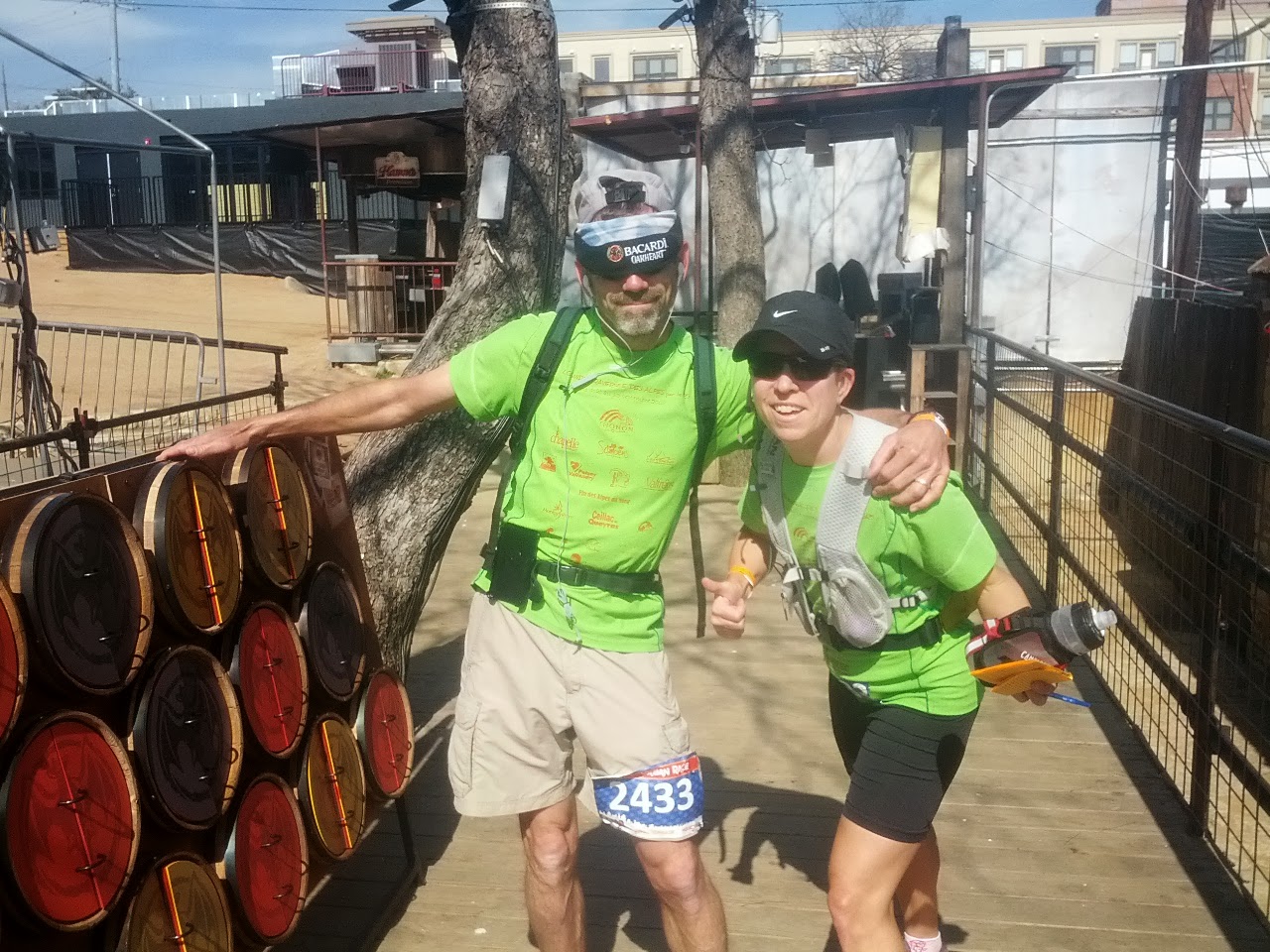 Our last checkpoint!  This one was confusing... we found Tears of Joy (hot sauce place) just fine, but then we had to do some kind of quiz where the answers didn't seem to matter (?), got two stars on our clue sheet for some reason, then we were directed inside so one of us could get a drop of hot sauce on our tongue.  John volunteered - thank you John! - but apparently the tip of the toothpick didn't have anything of consequence on it so he got off easy.  We're not even sure that part was required, because the only thing we really needed was this photo with the store thermometer: 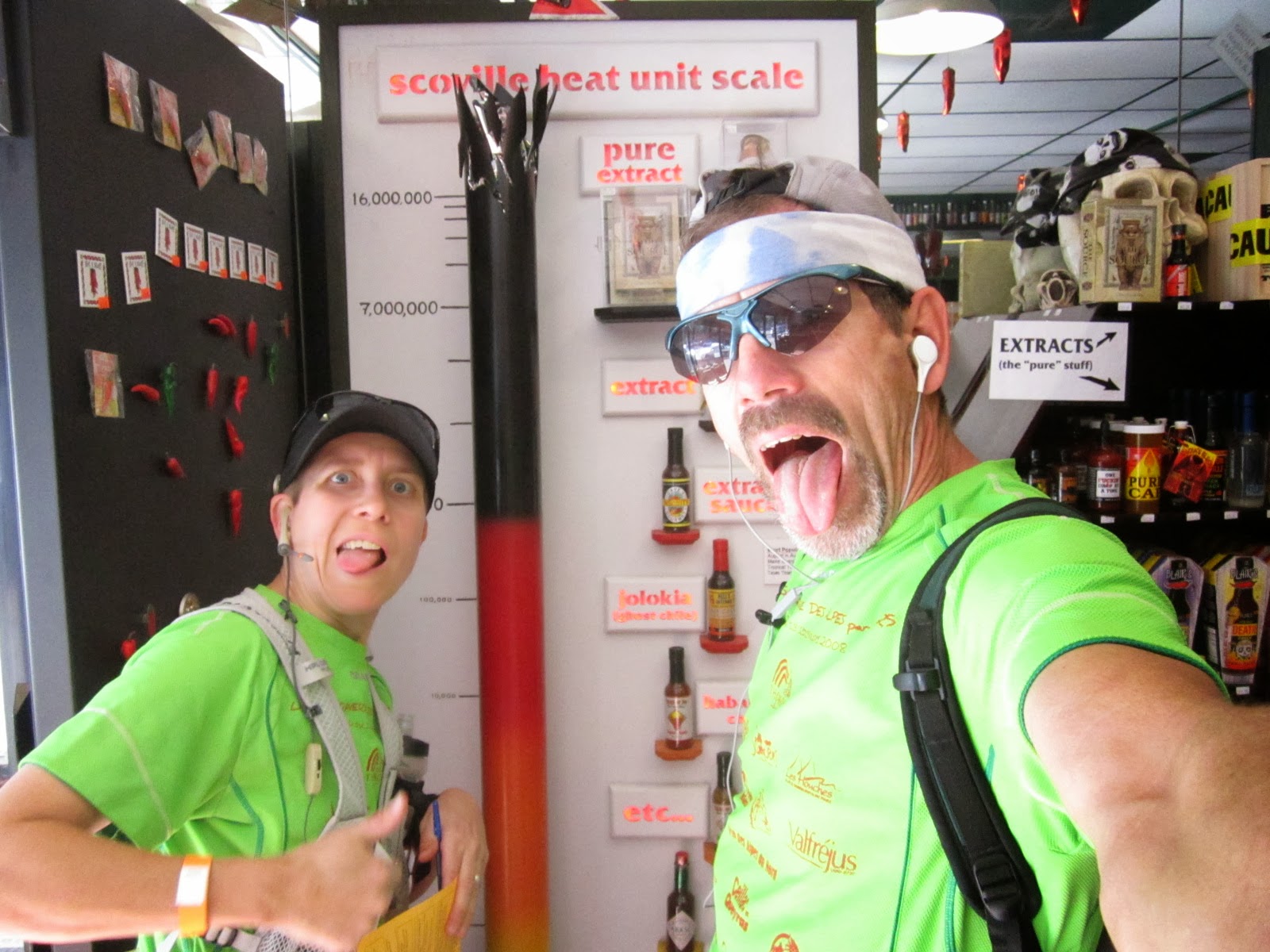 Amid all that confusion (on our part) and probably several wasted minutes, I didn't bother trying to fish out our plastic egg... poor forgotten egg.

Finally - the last 2 squares of our tic-tac-toe, with help from Danny.  Thank you Danny!  He handed us a fortune cookie, courtesy of a local Chinese food restaurant where he managed not to place an actual order but still got some fortune cookies.

Then he helped with this video of me drinking a swallow of BBQ sauce - at least it tasted good!
http://www.youtube.com/watch?v=svM2_E0vhR4 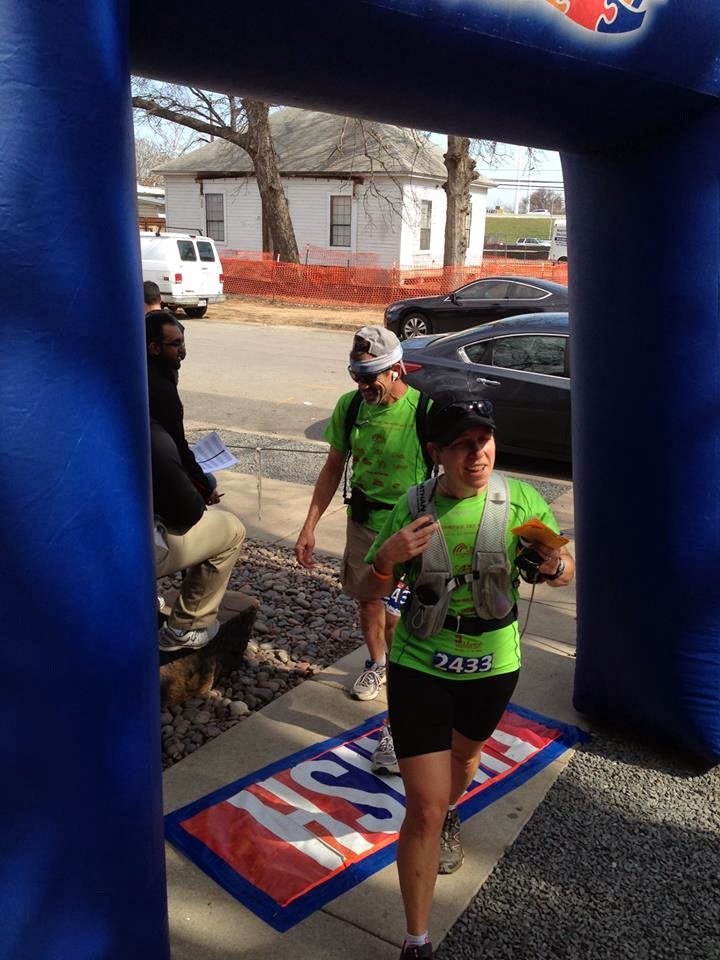 There was a lot to review, and I got stuck trying to find our St Jude's photo on Twitter.  While working on that issue, I heard a familiar voice behind me.  It turns out Sheila R. was biking around town and happened upon Art and Robyn during the race.  So she came over to join the party!  I just managed to get my head turned around to get into this fun photo: 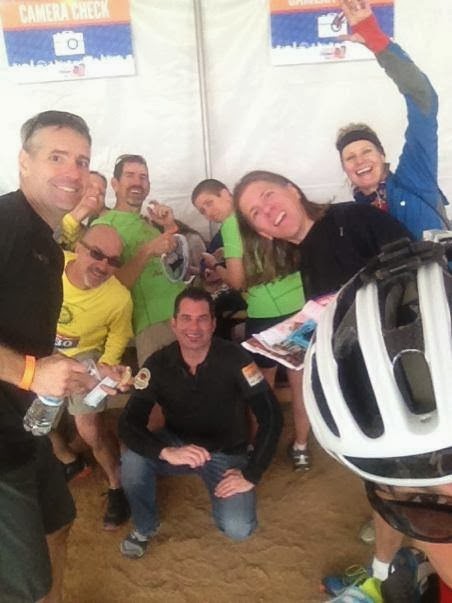 Art demonstrating how the stencil spray point is supposed to look: 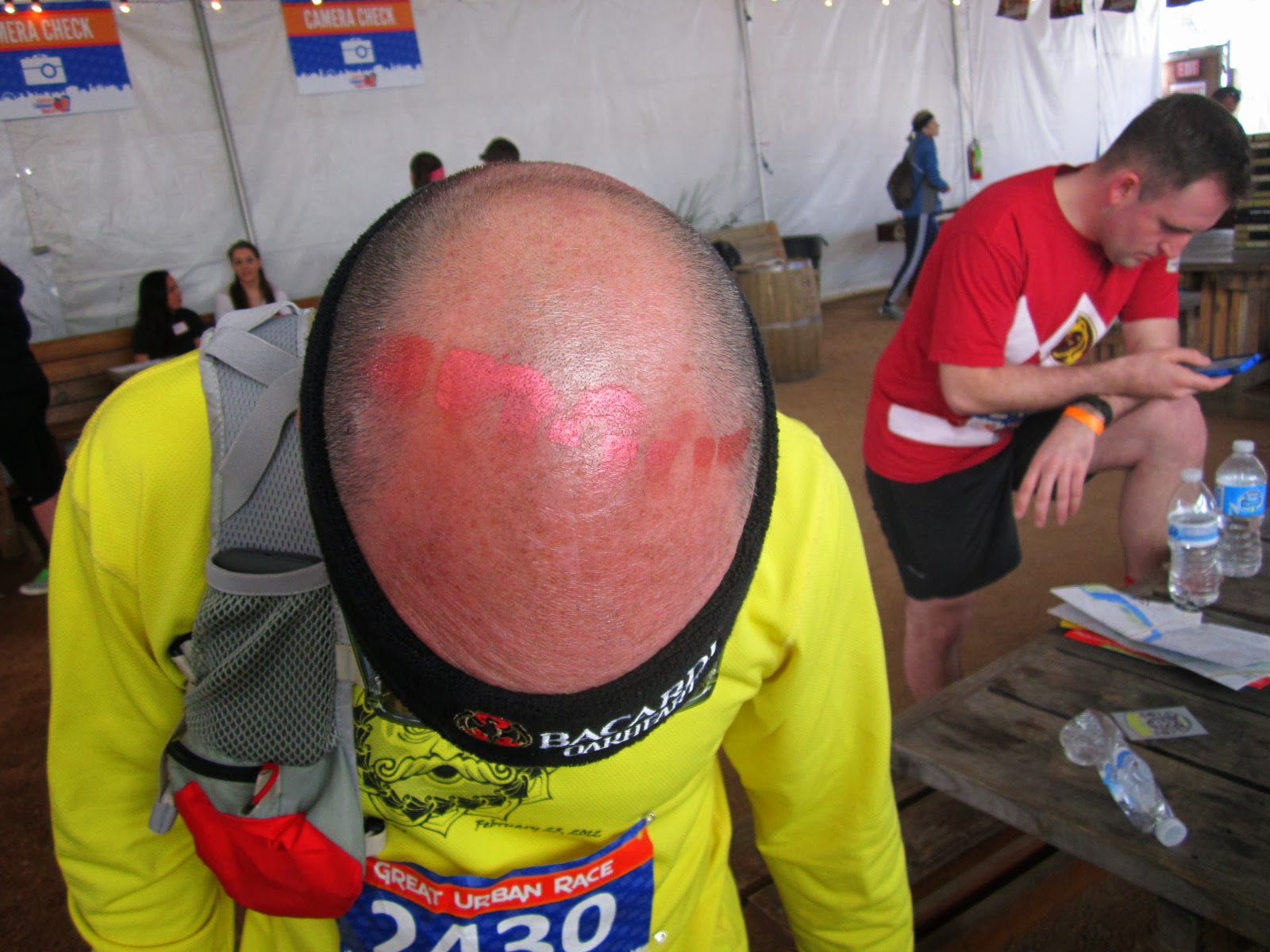 It was great fun seeing Mark and Ian from Mighty Motrin Power Rangers.  We have raced against and chatted with Mark and Karen many times during our time racing in the Northeast and we were excited to see Mark again and meet his son who is at Fort Hood: 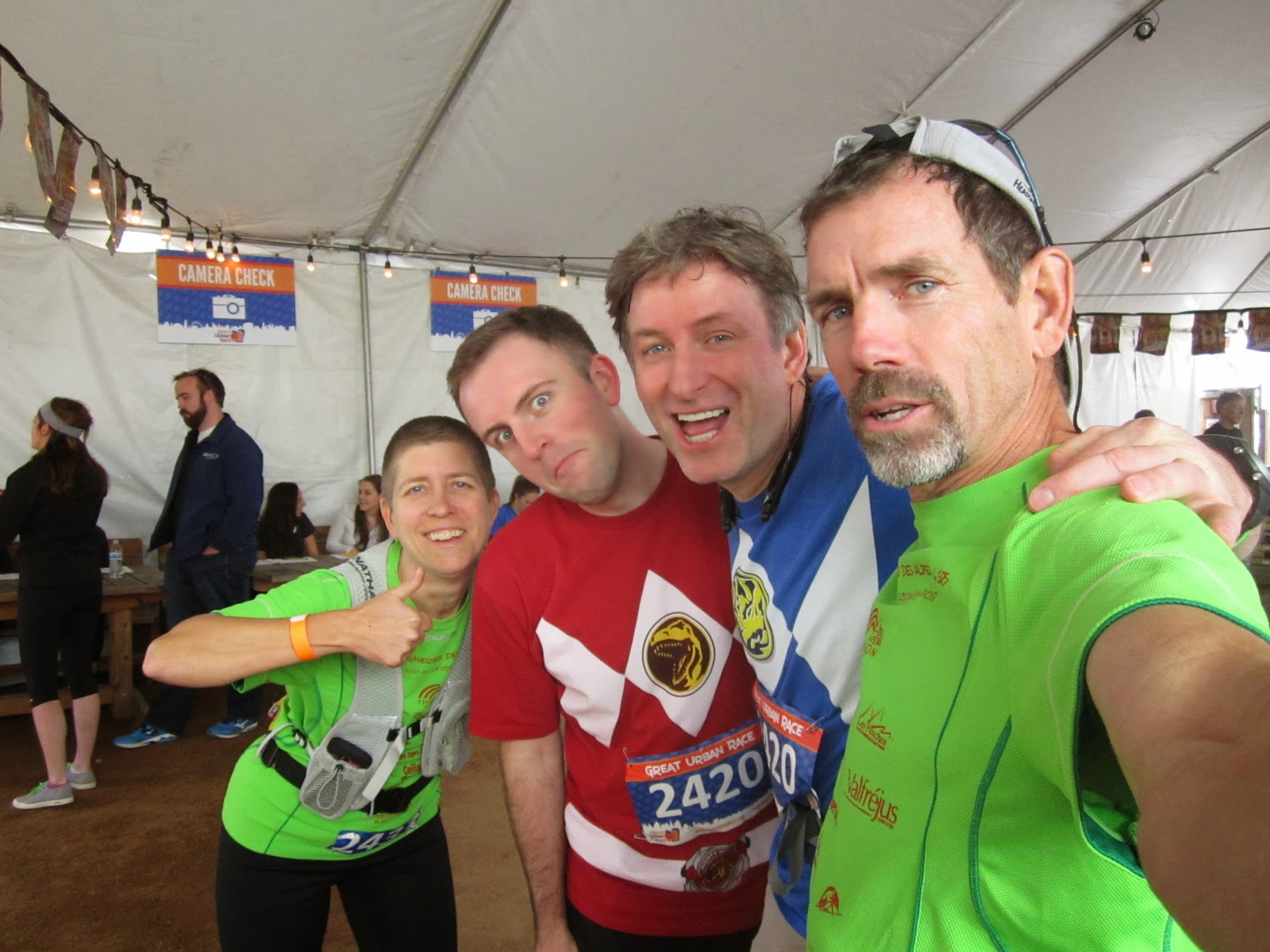 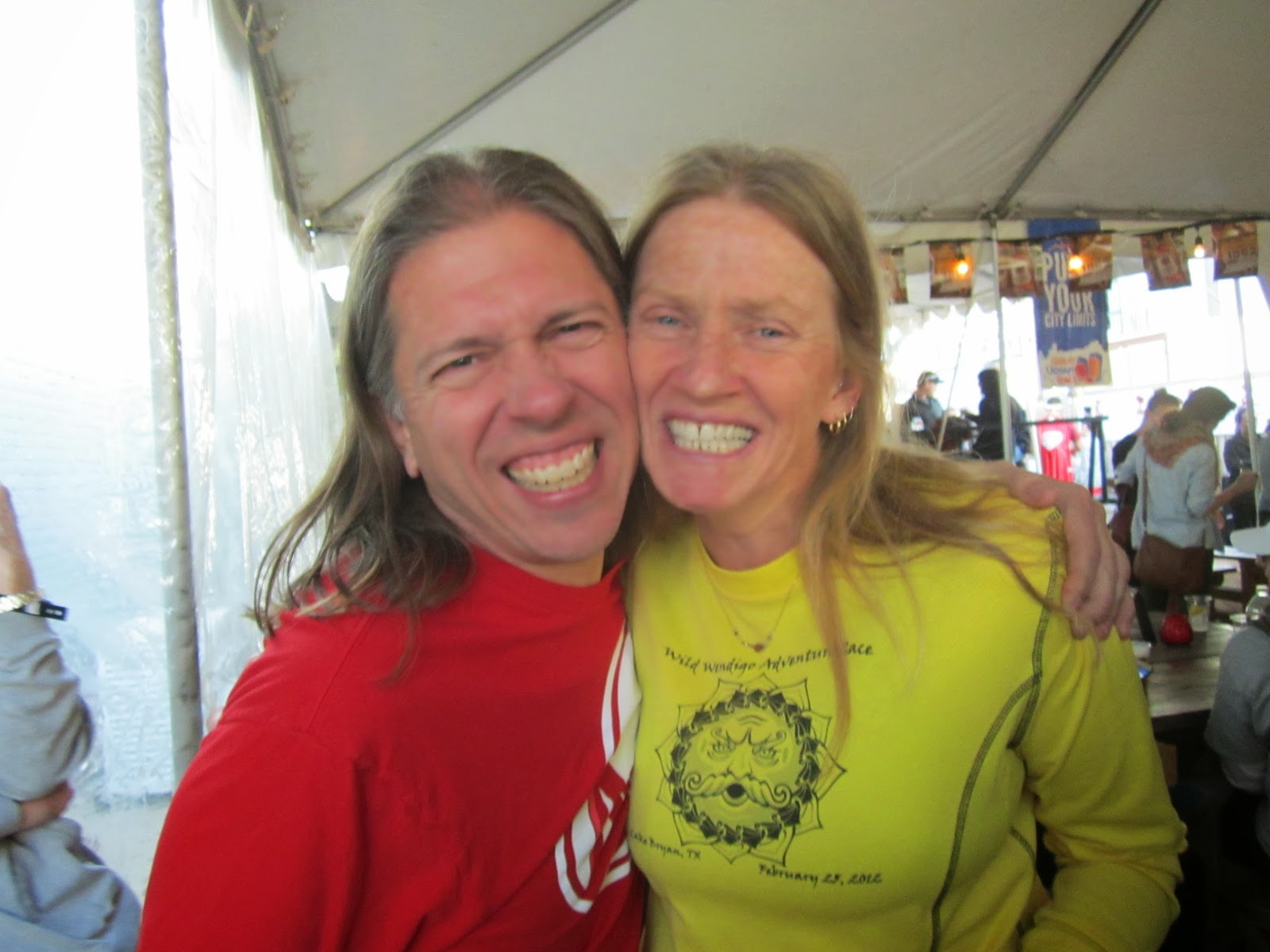 Showing off all the Too Cool hoodies from the Big Chill race: 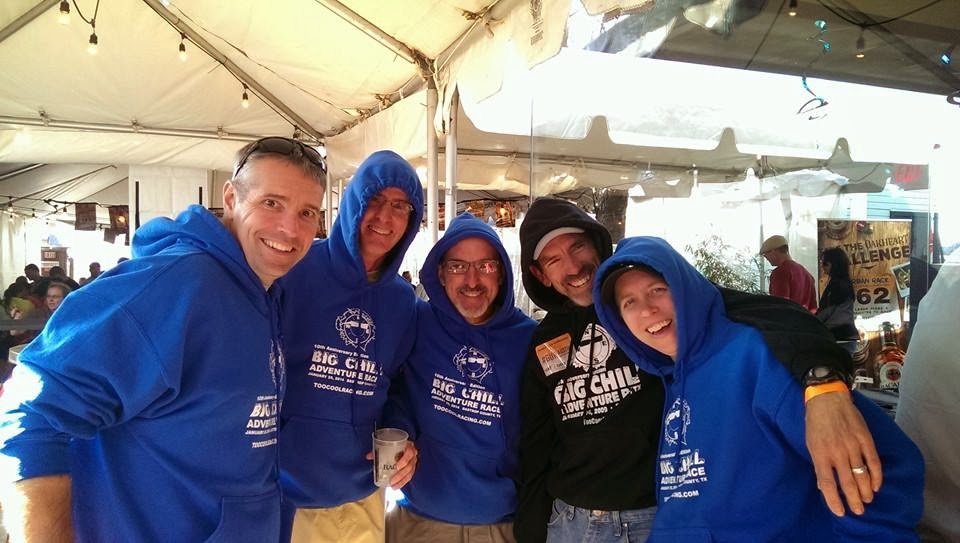 So we never did get our Twitter photo uploaded (stupid Twitter) but at least we know now how to get it to work for next time.  With a 30-minute penalty we dropped from 3rd across the line to 5th place.  Enough to get us to Vancouver in August!

Loved all the camaraderie and fun times - thank you GUR and our Austin mob!