Crazy coincidence, both my Mom and John's parents ended up visiting DC on the exact same weekend, without knowing the other would be there.  And we ended up with a free weekend on the eastern side of the country (with the cancellation of the Big Dog Backyard) and a chance to drive over to see them and Kathy and Bob.

We started with breakfast with the Beards (Mom would not arrive until the next day) and then John and I went for a run from the hotel near Union Station over toward the Lincoln Memorial.  Running along the Mall is always fabulous.

A beautiful sight on a lovely morning: 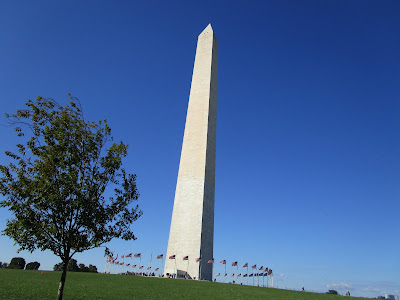 The new African-American museum is coming along nicely: 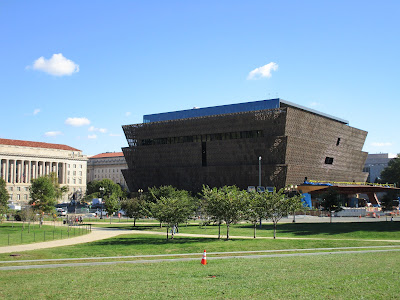 Right about there we got a call from Jerry (John's Dad) saying that a taxicab had hit their trolley bus and they were stuck there for a little while.  They couldn't even get off the bus because the cab was against the door!  At least everyone was OK.  Just a delay.

So we went to investigate the situation with getting tickets to go up to the top of the Washington Monument - recently reopened!  While we were poking around, a tour guide with an extra couple tickets offered them to us.  What?  Why sure, OK, thank you!!

With time and tickets in hand, we were stoked for our first visit inside the tall obelisk. 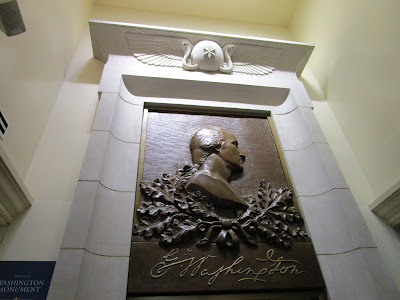 Spectacular views from the top, this side overlooking the tidal basin and Jefferson Memorial: 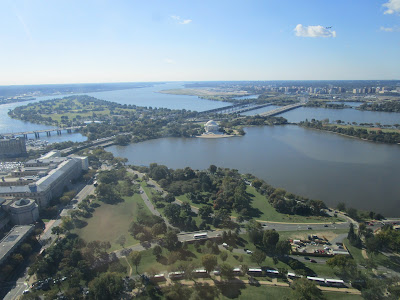 Wonderful look down the Mall past the WWII monument toward Lincoln: 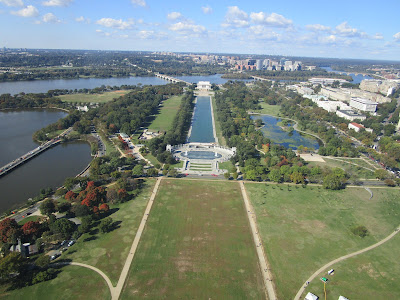 On the way down we got a look at some of the plaques sent from all the states and various places around the world, built into the walls of the monument: 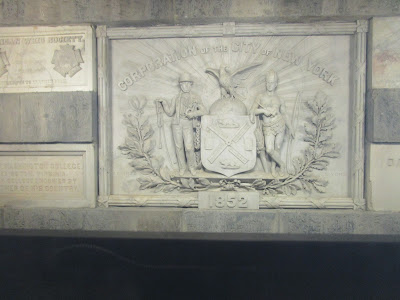 Wow, that was special!

Back to our regularly scheduled run, the Beards were moving again, and we reached Lincoln right as they arrived: 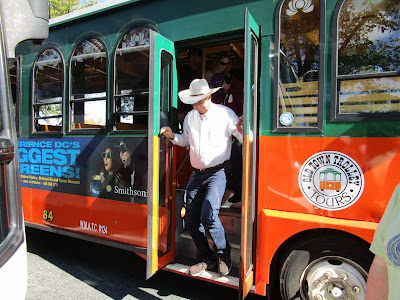 Psyched to spend time with the Beard parents in DC! 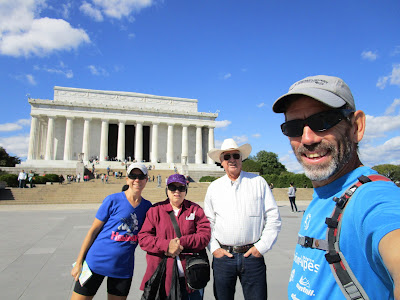 A park ranger helped with name rubbing at the Vietnam Memorial, this particular name needing a ladder to reach: 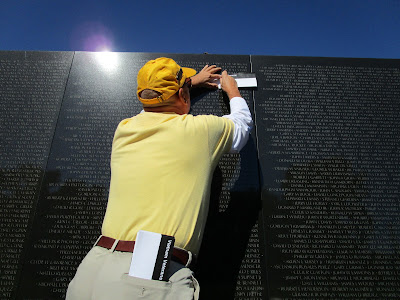 John figuring out the technique, our first time trying this: 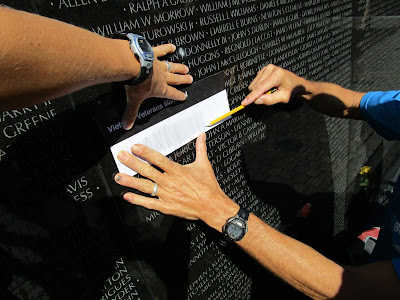 It was also our first time to visit the Korean War Memorial, now that is really something.  A park ranger told us that occasionally people call at night to report "a bunch of men walking with guns" and the rangers reply "yep, we're on it."  It is quite realistic and haunting: 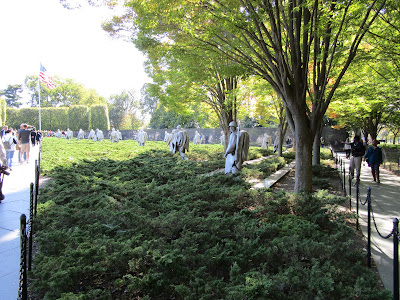 Leslie joined us as we explored the WWII Memorial: 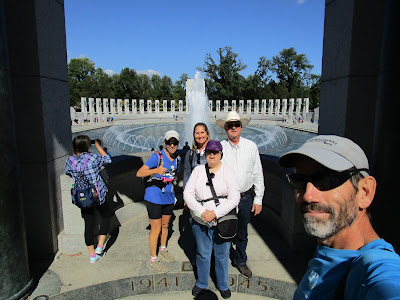 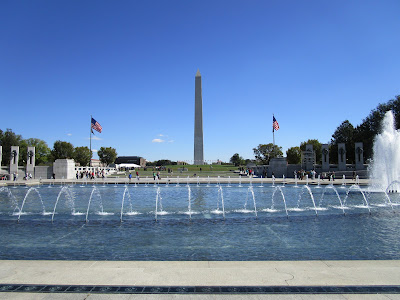 Over at the Smithsonian Castle, this little tree has an interesting shape: 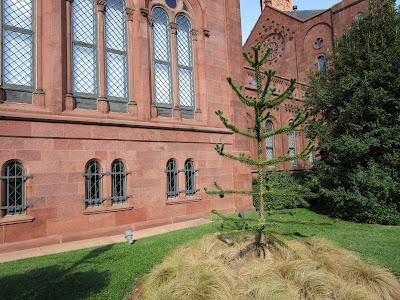 Entering the MLK Memorial through the "mountain of despair": 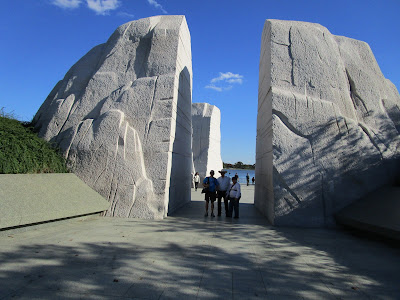 To see the "stone of hope" - amazing imagery: 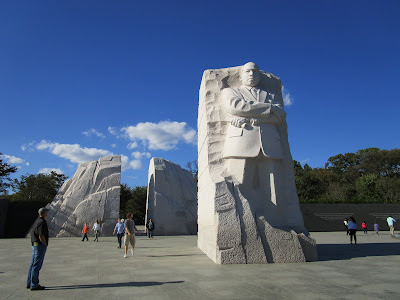 The next morning early, John and I staked out a place in line to get tickets for the Washington Monument for the Beard parents - it was so cool, we wanted them to see it too.

This time I focused the camera on the people instead of the scenery: 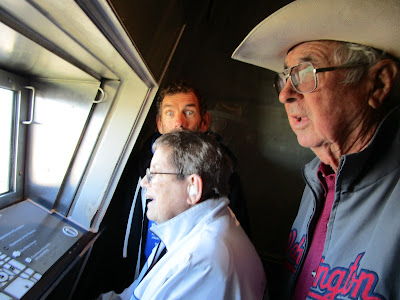 Love how this came out: 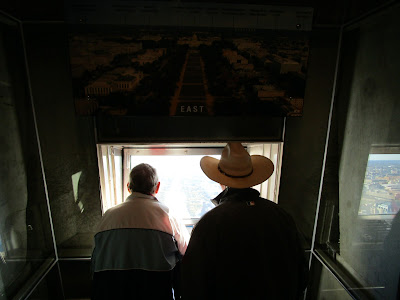 We were all happy to be up there: 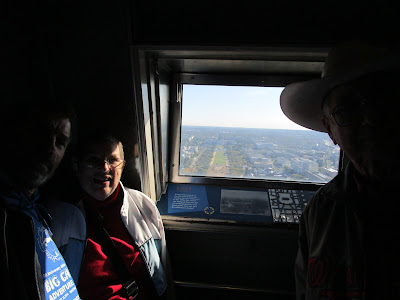 John probably could sleep here, but in this case he's checking out the obelisk perspective: 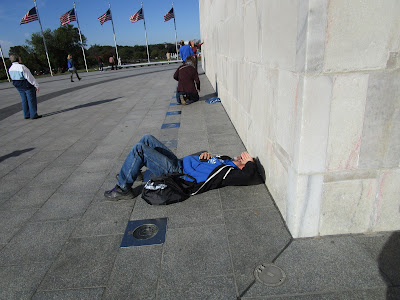 Time to go pick up Mom and the airport!  The DC Tour continues in the next post...