We've been missing the urban racing scene, between being mostly far away from cities last summer and having fewer races to choose from.  Finding a race we could reach during our trip, well, we had to do it.  We enjoy racing in Philly anyway, always up for an Urban Dare jaunt around town, we're in!

Here's your clue sheet, go!  From Rittenhouse Square we jogged a short way down Walnut on a deadend quest before getting some good beta and a place to start.  Off to the races, southeast to Plays and Players, one down! 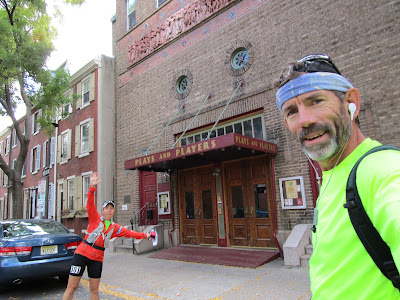 The next one our crew had ready for us was in Washington Square Park, so we hoofed it a few blocks to find our first dare.  This was a new (to us) jump roping challenge.  It also seemed new to the guys running it, as they took a couple minutes to figure out where the rope should be set up and who would be swinging it (they would) and how we would be jumping (we'd be jumping together).  Once we got started we knocked it out quickly.

I was in "have fun and work out the kinks" mode so no stress over the delay.  I had stressed a bit getting ready that morning, trying to remember how this urban race thingy goes and dealing with a few items that have changed or stopped working since last time.  After a while, things went from challenging to comical, so I was laughing whenever another small thing went wrong.

And eventually, things started going more right.  It's all good.

A couple more blocks of running, happily bypassing the Independence Hall area that tends to be crowded.  Next CP = William Woodin inscription at the US Customs House: 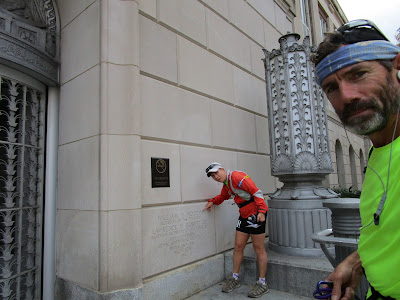 A short way north from there we were looking for a building where "Real World Philadelphia" was filmed.  Specifically, 251 Arch Street.  This was the only possible building, but it had no address number on it anywhere and no markings except a "For Sale" sign... 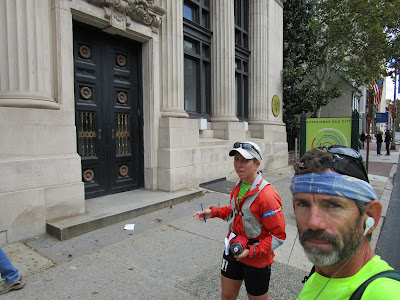 We spent a couple minutes checking around until Phil on the phone described it exactly and we figured it had to be it.  Rather odd, but here's a photo from another angle "just in case" (in case what, I don't know exactly): 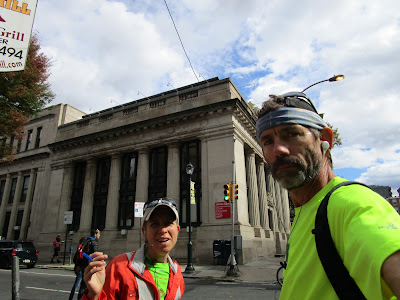 Phil directed us to the subway for a ride across town.  While waiting for the train we talked a nice stranger into helping us with the marriage proposal quest (it's legal now, you know): 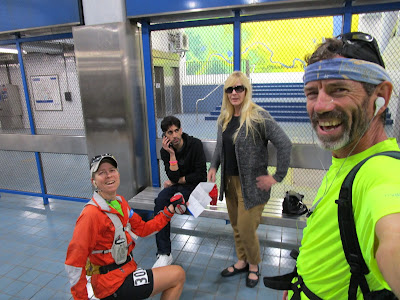 Finally a train and a ride west to the 30th Street Station.  A little more time lost from "not being locals" in figuring out how to get out of the metro station, across to the train station, and then into the big hall to find this memorial for railroad employees who died in WWII (nice sculpture): 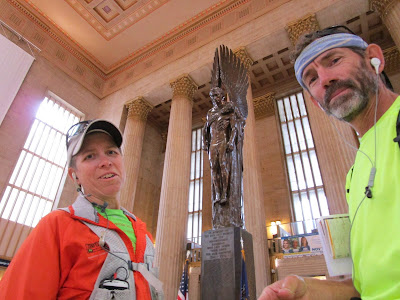 Back to the streets, over to a lovely large mural that John had seen earlier when we parked our truck.  I was a bit confused about how it's made from 6000 photographs, but Phil gave a good description and we got a decent picture: 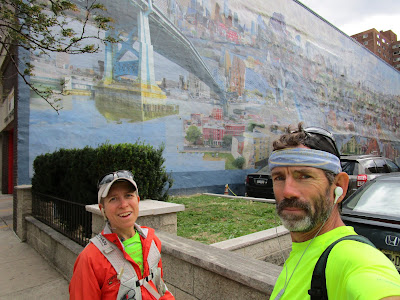 We diagonaled (is that a verb?) north to Logan Square for another dare.  Balloons!  We didn't realize how cold our hands were until we tried to blow up a balloon and tie a knot in it.  OK, a little more focus, there we go.  Making the balloon sword went quickly after that.

We followed Ben Franklin Parkway, through JFK Plaza, and over to this statue of Ben Franklin the Craftsman (not at all similar to the modern art piece I was initially trying to make into Ben Franklin).

One of my favorite selfies in a long time!  Nice capture, John! 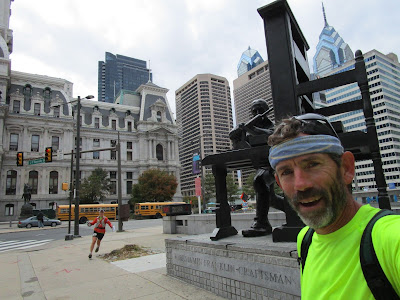 Let's slow it down for a second, with a stroll "with purpose" through Macy's to find this giant eagle.  Two things of note - we tried first for a picture with the bird's butt, but it was blurry (the picture, not the butt).  And Kathy told me later that there is a giant pipe organ up above us, we'll have to go back and see it sometime! 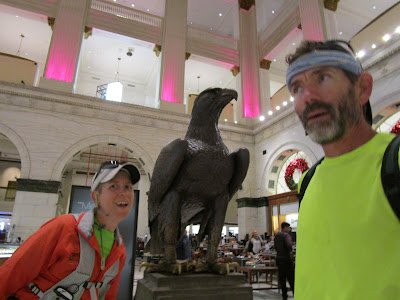 Out the other side of Macy's, back on the run.  Back to two checkpoints we were near earlier but didn't know it at the time.

First a statue of Samual Gross, "The Nestor of American Surgery" whatever that means.  Our final dare, which turned out to be trivia questions!  John was excited, I was thinking this is a great way to showcase how bad we still are at trivia no matter how much we try.

First question was presidential, and a couple years ago this might have been a good category for me, but my brain isn't at all wired to remember details.  Who was the first president to win a Nobel Prize while in office?  We took a guess but didn't come up with Theodore Roosevelt.  Ah Teddy, constantly surprising me.

John was already tying the cord around our lower legs to prepare for penalty 3-legged laps when we answered "Ford" for 2 questions about automobile men (one was a quote about his cars, another about a town he set up for his workers).  Correct both times, we'll take it.  John got the next two right, one about a funny baseball card (the guy's fly was open in the picture) and a quote from a music figure about the "other assembly line in Detroit" (Motown!).

Last question - what was the name of the Wright brothers' plane that flew at Kitty Hawk?  Now that's just crazy.  My brain DOES keep some bits of minutia that it heard only the day before (thank you Air and Space Museum!), so the Wright Flyer was right at the top.  Yay for coincidence and weird happenstance!

One checkpoint left... another few blocks to the Royal Theater for a photo with a mural.  Our crew was very specific about which panel to find and to be sure to get "Miss Jessie" in the shot.

Excellent framing, John , with your eyes closed even! 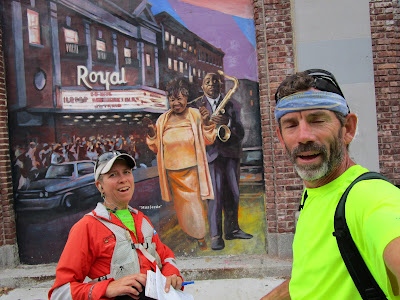 We hustled back to the finish line, amazingly showing up just seconds ahead of our friend Ed and his teammate Joe.  Even though we arrived first (barely), John attempted to let them win (which isn't something we had ever discussed), I offered up a tie, Ed ran into the building ahead of us, and John and I and Joe got stuck at the door with John going one way, me going another, and the tow line stretched between us.

As I was reaching for the clip on the tow line, and to alleviate this strange situation, John the race director told us he was calling it a tie.  Thank you John!  He told us later that it was only the second time he had ever called a race a tie, and we were involved in the first one too (in Providence)!  I guess he won't be forgetting our faces anytime soon.

Turns out Ed and Joe had taken a photo of Bessie instead of Jessie at the Royal Theater, that's a bummer.  They were allowed back out the door (without our tow line in the way this time) to go fix the picture.

Another team, Brent and Meredith, arrived a few minutes later.  They had the 5-minute bonus (proposing marriage to a woman in a real white wedding dress) but that wasn't enough to pass us up, so we were officially alone in 1st place and they were psyched to get 2nd.  Ed and Joe came back with the right photo, but then our friend Mark and his teammate Penny came in also with the bonus while Ed and Joe didn't have bonus time.  Mark and Penny were 3rd and Ed and Joe finished the day in 4th.

We had a great time running through the streets of Philadelphia, thank you Urban Dare for the fun course!