John was looking much better in Ouray - yay! He told me that he has caught back up with the liquid intake, and I think he has also found a pace to settle into. He thinks he is climbing slowly but his splits are exactly what he was planning for. He has been doing a "Gookinaid - Ensure - SPIZ" routine through and out of the aid stations and I think that is working well. One more aid station where I can meet him tonight (Grouse Gulch), then he is on his own with his drop bag at Sherman. I'd either need 4WD or to drive 100 miles around to Lake City to see him there, so we decided not to do that. My last crewing AS will be Cunningham (the last aid station on the course, actually), tomorrow sometime.

John told me that the snow slide down from Virginius was "COLD!" - he used his hands and elbows to slow himself down (?) and they were frigid for a while afterwards.

John's feet are doing splendidly - he has changed socks once, his feet look clean and smooth, and the water crossings don't seem to be a problem. At least not yet - apparently the last quarter of the course is quite wet. If his feet are still doing well at that point, they should certainly get him to the finish.

I drove over to Silverton to get the curvy Million Dollar Highway out of the way while it was still light out. Still have 10 miles on a dirt road to Grouse Gulch, but I don't expect much traffic up that way. After crewing at Grouse (estimating sometime around 1 pm to see John there) then I get to sleep!

Some photos from the Ouray area...

I missed seeing Kyle (who is still positively flying around the course), so you'll have to settle for a shot of the second place runner at Ouray, Jared Campbell: 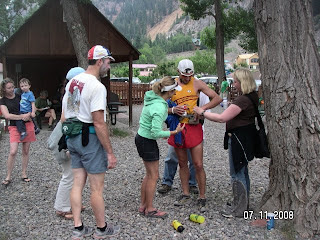 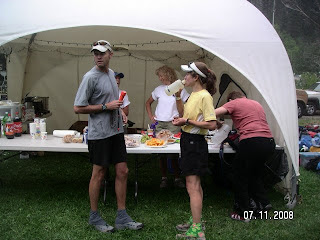 2 women runners (Betsy Nye and Diane Van Deren - you'll just have to take my word for it), 2 pacers, and 2 spectators on the trail that goes over the Million Dollar Highway just up from Ouray: 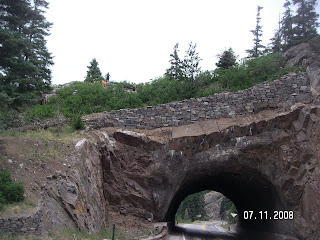 John coming up to the highway cross-over: 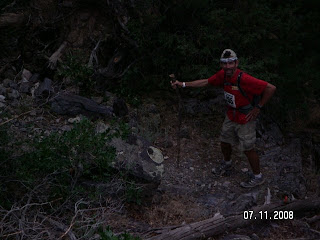 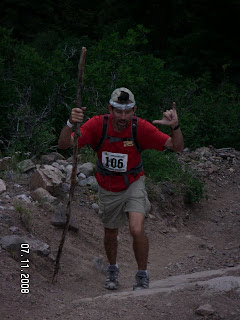 Many thanks to the well-wishers today! John was excited to hear about everyone watching and cheering him on.