I ran the 10K that morning and found that my legs felt strong after 10 days of PQ volunteering and no running. My breathing actually kept up for most of the race (which was a surprise, because 5000-6000 ft at Montana is NOT the same as 9000 ft in Silverton). One final hill did me in, leaving me gasping audibly for breath, but I would NOT let a woman pass me after I had just passed her. Stubborn me. I had to walk for a while to recover after the race, and I think I even told John that it was pretty stupid to run the race in the first place. But now a couple days later I'm glad I did :) It's one way to speed up acclimation, or at least that's my theory and I'm sticking to it.

John didn't run because his stomach has been giving him a bit of trouble for a couple days. He's doing mostly OK now (we hiked up over 3000 ft yesterday to see the final section of the course), but he is mostly trying to take it easy and be fully rested and ready by Friday morning. Hardrock starts at 6 a.m. Friday! Yikes!

Meanwhile, we enjoyed ourselves at the Silverton parade on Friday. We love these little town July 4 celebrations. Reminds us of Jason and the pie eating contest in Telluride :)

I saw a sign in the train shop in Silverton that may apply to me: “Once an engineer, always an engineer”

There was a contingent of Hardrock 100 runners in the parade – as they went down the street, someone would yell “Switchback!” and they would swerve from side to side, too funny.

Some photos of the event...

Not quite a bike: 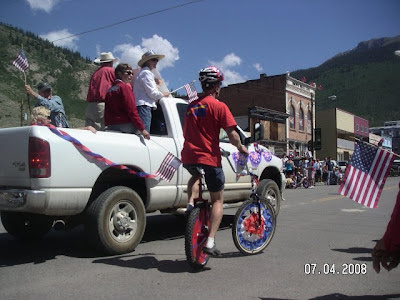 Not quite a hula, but somewhat Hawaiian! 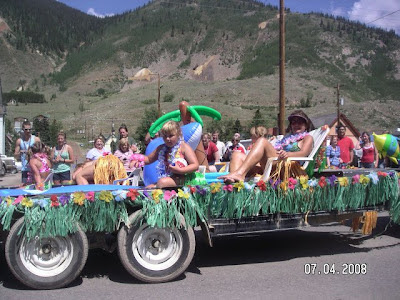 Gunfighters who pose for photos: 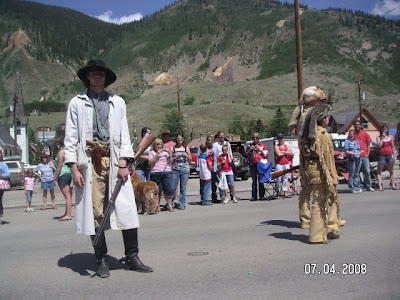 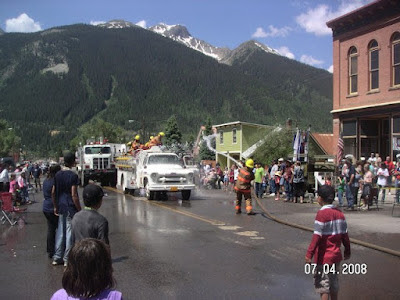 Many people (including us) got pretty wet: 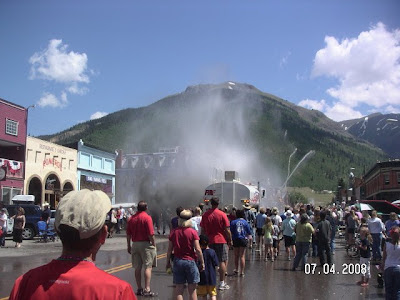 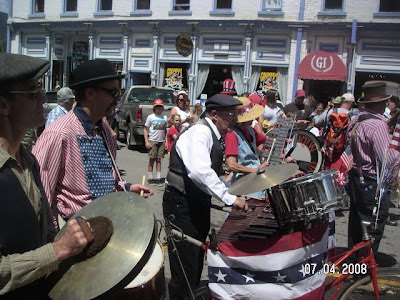 And a final random note I've been meaning to write for a while...

We love our Sprint card for internet access! So far we have used it at PQ TA’s for team tracking (and finding a medical supply store for a crewperson), to locate an REI in Salt Lake City, at the KOA in Ouray, and now for blogging in the park at Telluride. We have picked it up in places we didn't expect (Ennis, Silverton). It has worked really well, even when it's on "slow mode" at the more remote locations. So anyway, a little plug for our little Sprint card.
Posted by Marcy at 2:58 PM

i love ouray! the last time we were there we played/soaked in the hot springs with the kids looking up at the mountains that had a bunch of snow on them! we saw some elk on the drive out and garrett perfected his 'elk' call! it was very funny!