It's game time! I'm in Telluride this morning (and on the drive over I noticed the section of route 62 that we rode on during PQ 2002 toward CP12 and the "fixin' to fart" overnight trail...). Just hanging out, watching web times, waiting on runners. Enjoying an excellent internet connection and a bit of food from the Main Street breakfast nook :)

Here are some scenes from this morning...

In the gym at pre-race check-in. Apparently 2 runners got into the race just this morning - one when someone dropped and another when a runner didn't check in by the 5:45 a.m. deadline. Oops! 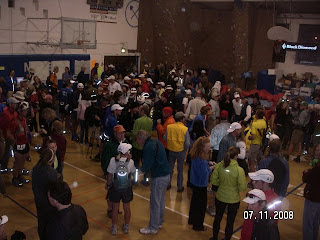 We headed outside for the start, then the race director counted down "3...2...1... get outta here!" I wasn't in a good spot for taking photos and I need to work on my action shots. This is the best I got (I expect someone else in the crowd will post a better race start picture online somewhere - or at least I hope so!): 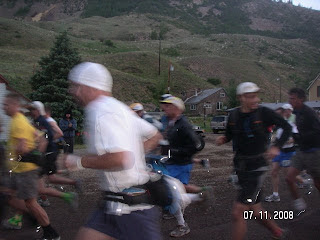 Almost 2 minutes after the start of the race, at the finish line rock: 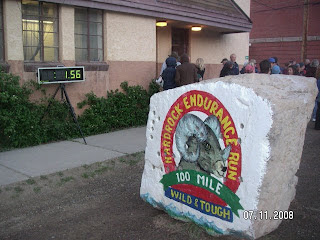 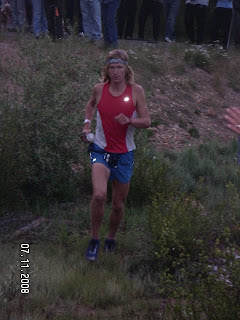 Kyle at the first water crossing (which was maybe 2-3 miles into the race, right next to the road, and a big draw for spectators): 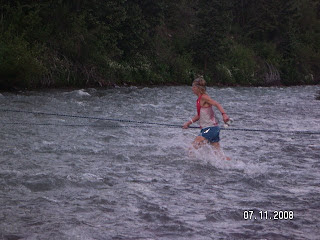 Here comes John!!! He was not far behind Kyle plus one group of front-runners, looking great in the very early miles: 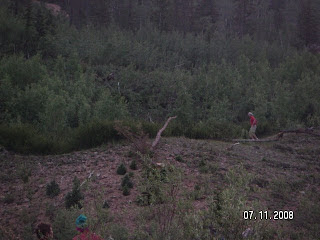 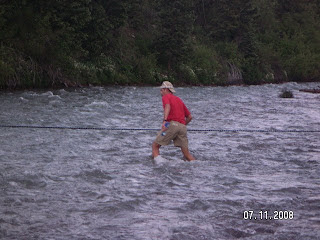 Time for those quick-drying Salomon shoes to start taking effect: 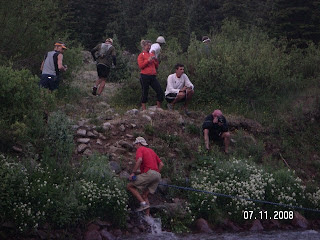 Markus Mueller (who we know from the German 100) - he got in off the waiting list last week: 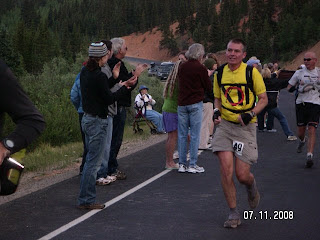 John Cappis with the camera ready (he told us he may go hang out at Oscar's Pass to take pictures this morning): 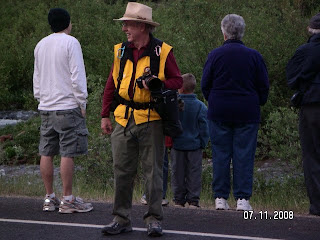 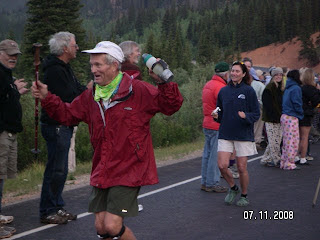 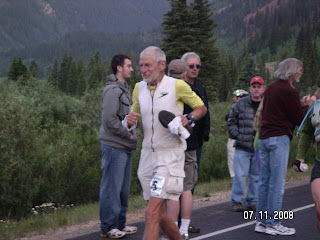 Hans Dieter and the woman next to him stopped to switch from running shoes to water slippers for the water crossing: 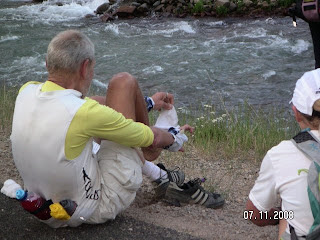 Sometimes I get lucky with my little camera! Go Joe! 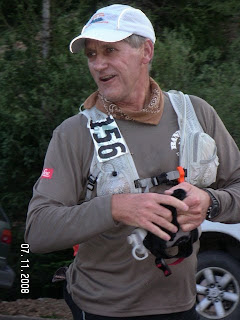 Hans-Dieter getting out of the water, Joe following a few runners behind: 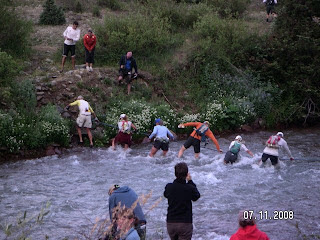 * John's heartrate was about 60 this morning, which is a good bit higher than his normal 40-45. Mine is about 80 (higher than my normal 60-65). Guess we're not completely acclimated yet, which isn't surprising since we have been in this area for only a week. We'll see how that works out for John.

* I have read some things about the Bighorn 100 race from a couple weeks ago - apparently there was so much snow up high that they rerouted the course. Based on the lead runner times (2-3 hours faster than normal) I was wondering if I missed the right year to do the race. Then we heard from Joe that the second half of the 100-miler pack followed the 50K runners through a particularly sloppy, muddy few miles, and it was MUCH harder than normal because of the deteriorated trail conditions. Guess I'm glad I wasn't there after all!

* The latest from the web tracking: John came through the first aid station (AS) in about 12th place. The tracking table is rather messed up (the Chapman AS times are getting transfered into the KT column for some reason), but hopefully that will get sorted out soon. Kyle is smoking the first couple sections of the course!

* The Telluride AS is almost open for business so I can go set up a stool and John's bag of stuff. He took only a water bottle (relying on the KT aid station and his drop bag at Chapman) for the first 28 miles. I'm hoping to heck that it works out OK for him. He's got a Camelback pack here in Telluride for the next section.

It's awesome that you're finding the time to post live updates, with pictures, while you're supporting the race! Now that's what I call useful blogging! Go, John, go!

run John run!! I love the updates. your sprint card was a wise investment!! You should charge $2 and update and make money from other runners for family updates!!