Well, we survived our first "crewed" aid station! John is doing great! He started out quite fast, and it probably helped that he wasn't carrying much. He told me that Oscar's Pass (otherwise known to our PQ 2002 team as that "f-ing mining road" kicked his butt one more time. Looks like he treated some water, and he was really interested in the Gookinaid when he came in. So perhaps that one-bottle strategy caught up to him in this last section.

He's now carrying a Camelbak with plenty of water, so that should be good. I don't know that he ate enough in the aid station here (he even skipped the banana!) so I'll be watching him at Ouray :)

Here's a picture of Kyle who blew through so fast he landed over in Ouray already... 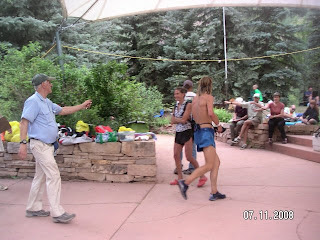 And here's John! Joyce probably got a couple other good photos. I had to stash the camera to start handing John stuff... 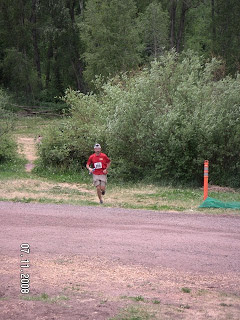 John was a bit concerned about a bunch of people passing him in that last section, but his time is right on the early edge of our estimates (2 to 3 pm).

I'm sure he'll have fun coming down the snow slopes on the other side of Virginius Pass! Can't wait to hear about it.

this is so cool again!! i ditto dave with the useful sprint card comment. awesome updates. go JB go!!!